Footballers become icons by transcending the very pitches upon which they make their living. As wonderful as a stunning goal, or a remarkable twist, or a glorious pass can be to watch, they alone do not inspire more.

Gianfranco Zola provided all of the above during his time at Chelsea, but he also made his mark in other, less overt ways that shaped the history of the club.

Tactically, he was part of a new breed of attacker to thrive in the Premier League, cementing the gradual shift away from traditional British values of forward play to a more fluid, foreign outlook.

Culturally, he helped to embed a new way of thinking about the game; as one of a wave of imports in the league at the time, his professionalism was a fresh example to follow. In various ways, Zola was a subtle revolutionary, a microcosmic sign of things to come.

The little Italian made Chelsea fans – and many neutrals – smile. He did so firstly with his goals and assists; secondly by the manner in which he scored those goals and provided those assists.

Technically he was spectacular. But, most importantly, he was unselfish in his quality, and this is why the No.25 shirt he wore at Stamford Bridge has not been re-issued since his departure in 2003.

Zola didn’t simply grace his team-mates, managers and fans temporarily with his presence. He showed them the way to greater things. He arrived a footballer; he left an icon.

Chelsea have been greatly influenced by Italian football. This influence has been felt most prominently in the dugout; they have had more Italian managers – five, to be precise – than of any other nationality bar English and Scottish.

Those five Italian managers are responsible for two Premier League titles, one Champions League, three FA Cups, one League Cup, one Cup Winners’ Cup and one European Super Cup, among other trophies, during a combined 8.8 years in the Stamford Bridge hot-seat.

Overall, Italian coaches have led Chelsea to 11 of the 23 major honours won in their entire history. They have been aided by playing compatriots, including the likes of Gianluca Vialli, Roberto Di Matteo and, of course, Zola. The most recent addition to the club’s Italian playing ranks is Davide Zappacosta, signed from Torino for a fee of just over £23million hours prior to this summer’s transfer window deadline.

Carlo Ancelotti preceded Antonio Conte in the club’s Italian manager lineage, helping Chelsea to a league and cup double in 2010. But the legendary boss had already made a significant impact on the club, albeit inadvertently.

In 1996, he was appointed head coach of Parma. At the time, he had an abundance of attacking talent at his disposal, with a front two of Hernan Crespo – signed from River Plate – and Enrico Chiesa – signed from Sampdoria – guaranteeing flair and finishing. Zola had been a key member of the side for several years, but he found himself ushered out to the wing in favour of this dynamic new strike force.

Without a natural berth in Ancelotti’s 4-4-2 system, the diminutive frontman decided it was time to leave. And, in November of that year, he signed for Chelsea for what was then a substantial fee of £4.5million.

In the late-1980s through the mid-90s, while Zola learned from Diego Maradona and won a Scudetto at Napoli, he played a vital role in Parma’s rise to the top of the Italian game, and represented his country at multiple major international tournaments.

Chelsea bounced between the top two tiers of the English game before settling in mid-table, where they finished for six consecutive seasons before the forward’s arrival. 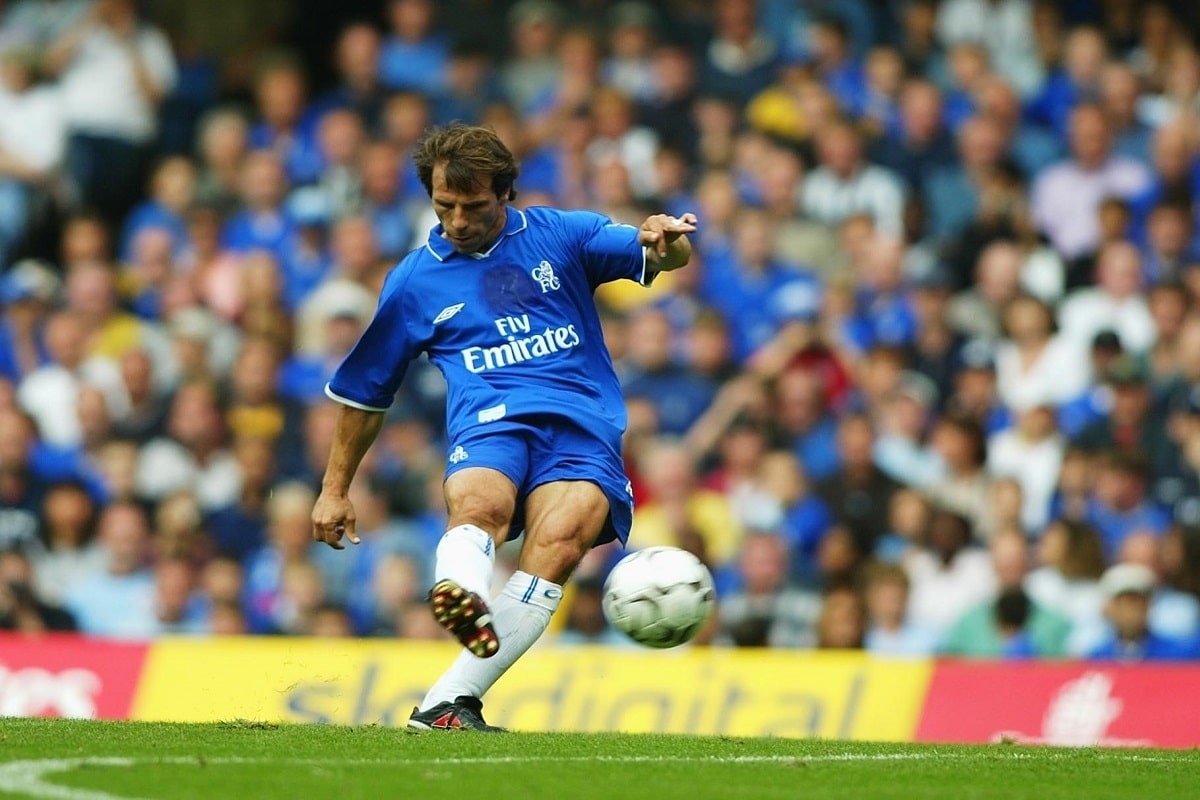 Ruud Gullit had been appointed player-manager and decided to focus on talent from overseas, bringing in Vialli, Di Matteo, Frank Leboeuf, Tore André Flo and Gustavo Poyet. There was, therefore a multicultural air about Stamford Bridge well before Zola’s signing.

And, while the concept of the ‘second striker’ was still relatively new to the Premier League, the Sardinian was far from the first of his kind. Éric Cantona had already thrilled Manchester United fans with his upturned collar and strutting charisma, while Dennis Bergkamp’s sublime touch and Kenny Dalglish’s artistry had wowed Arsenal and Liverpool supporters respectively.

Nonetheless, Zola gave opponents similar tactical quandaries, primarily how on earth he should be marked. In his book on the history of football tactics, Inverting the Pyramid, Jonathan Wilson wrote that: “The remarkable impact of Éric Cantona and Gianfranco Zola was largely the result of their ability to drop off and play between the lines, confusing English centre-backs.”

Zola stood out not because of the role he played, but his style within that role. He was truly unique, someone that would be almost impossible to concoct purely using the imagination, and, once seen first-hand in all his shaggy-haired, baggy-shirted splendour, could not be forgotten.

He was at odds with the Premier League; standing at 5ft 6ins he must have initially seemed an easy afternoon’s work for the many hulking, brutish centre-backs of the time, but his small stature worked in his favour. His low centre of gravity allowed him to evade markers with quick turns, and he made space with effortless flicks of his right boot. Vialli described his ‘explosive force’ as what allowed him to “pounce on loose balls and accelerate away from defenders.” Sir Alex Ferguson described him as a “clever little so-and-so.”

Zola dribbled past Julian Dicks twice in the same move before scoring against West Ham United. He left Liverpool’s Jamie Carragher red-faced and on his back with a series of slight movements near an Anfield corner flag. He scored goals both ridiculous and important, from back-heeled volleys from corner kicks to European Cup Winners’ Cup-winning strikes.

Because of his style, age was no barrier to Zola. He joined Chelsea at 30 years of age but continued on, brilliantly, for seven more seasons. He scored his 80th and last goal for the club at the age of 36 in typically sensational fashion, lobbing a helpless Richard Wright to seal a 4-1 win over Everton on 21 April 2003.

His seven years at Stamford Bridge saw him bridge the gap between old and new. During that time, he educated young players on what commitment to the profession truly entailed.

“Gullit used to make the young English players go out before training and do a skills circuit,” said former Chelsea player Michael Duberry. “We saw it as a bit of a punishment. That's how it was seen. But Gianfranco then came out with us. It just made us feel like it wasn't a punishment anymore. It was something that would benefit us. It was such a great gesture.”

Zola also left an impression on young fans including Luca Hodges-Ramon, lifelong Chelsea fan and editor of the The Gentleman Ultra.

“As a young boy growing up in London in the 90s with an Italian father, I was only going to support one club, and a lot of that was down to the majesty of the little magician,” Hodges-Ramon said. “At a time when Chelsea began to bring exotic overseas players to the Premier League, Zola was the man who beguiled and enchanted the most. His legacy is immortal at Chelsea.”

When Zola arrived, Chelsea were an underwhelming Premier League outfit struggling to break beyond the confines of mid-table. By the time he left, they had flirted with title challenges, won major honours, and competed in the Champions League.

Early in 2003, he was voted the club’s best ever player. The timing was fitting, with the award coming months before the club morphed into something else entirely thanks to Roman Abramovich’s millions. In many ways, the lithe Italian had been the perfect transition player.

In seven years of Premier League football, Zola changed perceptions. He inspired team-mates to commit to the game wholeheartedly and enthusiastically. He inspired fans to pull on blue shirts and devote their weekends to the club. In Chelsea’s recent history, it is possible to identify two separate eras: pre- and post-Zola. However, the period in-between was the most spellbinding.