If you were to ask most non-Manchester United fans for their appraisal of Neville as a footballer, few would report glowingly. The majority, one would expect, would label the former right-back a ‘wind-up merchant' or discuss his limitations rather than any of the attributes that made him a mainstay of two trophy-laden decades at English football's most dominant side of the modern era.

Rather than pick out a choice tackle, a well-crafted assists or a job well done in marshalling a particularly tricky winger, they might highlight his antagonistic celebration in front of travelling Liverpool supporters at Old Trafford after a last-gasp Manchester United victory over the Reds in 2006, or his roughhousing of José Antonio Reyes in 2005.

Of course, Neville was a wind-up merchant, and he would leave the boot in on occasion if he felt he could unsettle a fragile opponent, but he was also the most consistent and driven full-back of his era.

Captain of United's famous FA Youth Cup-winning team in 1992, which launched the careers of David Beckham and Nicky Butt among others, to which Ryan Giggs was added at the later stages of the competition to give the Red Devils an extra competitive edge, Neville, from a young age was a leader.

“Football was his obsession,” fellow ‘Class of '92' member Keith Gillespie wrote of Neville in his autobiography, How Not To Be A Football Millionaire. “We had strong characters in our group, and he stood out.”

Neville was born to be United captain, a fate he realised in 2005 following Roy Keane's sudden and acrimonious Old Trafford exit.

As Neville would openly admit, he was not the most gifted of this special generation of United hopefuls, to which Paul Scholes and younger brother Phil Neville were added the season after the Youth Cup triumph.

But what he lacked technically, he more than made up for in single-mindedness and determination to wring every drop of potential from his modest natural gifts.

“Gary Neville . . . pushed himself harder because he knew that he did not possess the natural talent of some of his team-mates,” Sir Alex Ferguson says in his (third) autobiography, Leading. “I never used to worry about what he was up to on a Friday night because, certainly in his younger years, he would always be in bed by 9.30 p.m.”

Although he made his debut at the tender age of 17, in a UEFA Cup tie against Torpedo Moscow in September 1992, and was a regular starter just two years later, there were never any worries about Neville; he had the temperament and self-assuredness of a seasoned veteran.

So confident in the youngster's long-term credentials was Ferguson that he sold experienced England international Paul Parker to Derby County in 1996, as Neville would not be dislodged from the line-up.

The summer of '96 was a particularly special one for Neville. Collecting his first Premier League winners' medal in May after helping the Red Devils overhaul Kevin Keegan's Newcastle United, he shone for England at the European Championships on home soil, reaching the semi-finals with Terry Venables' side before agonisingly losing to Germany on penalties, indefinitely postponing football's homecoming. He was still only 21.

At the tournament, Neville showed his versatility, adaptability and maturity by featuring as a wing-back, a conventional full-back and a right-sided centre-back as part of a back three. Switching roles seamlessly and without fuss. 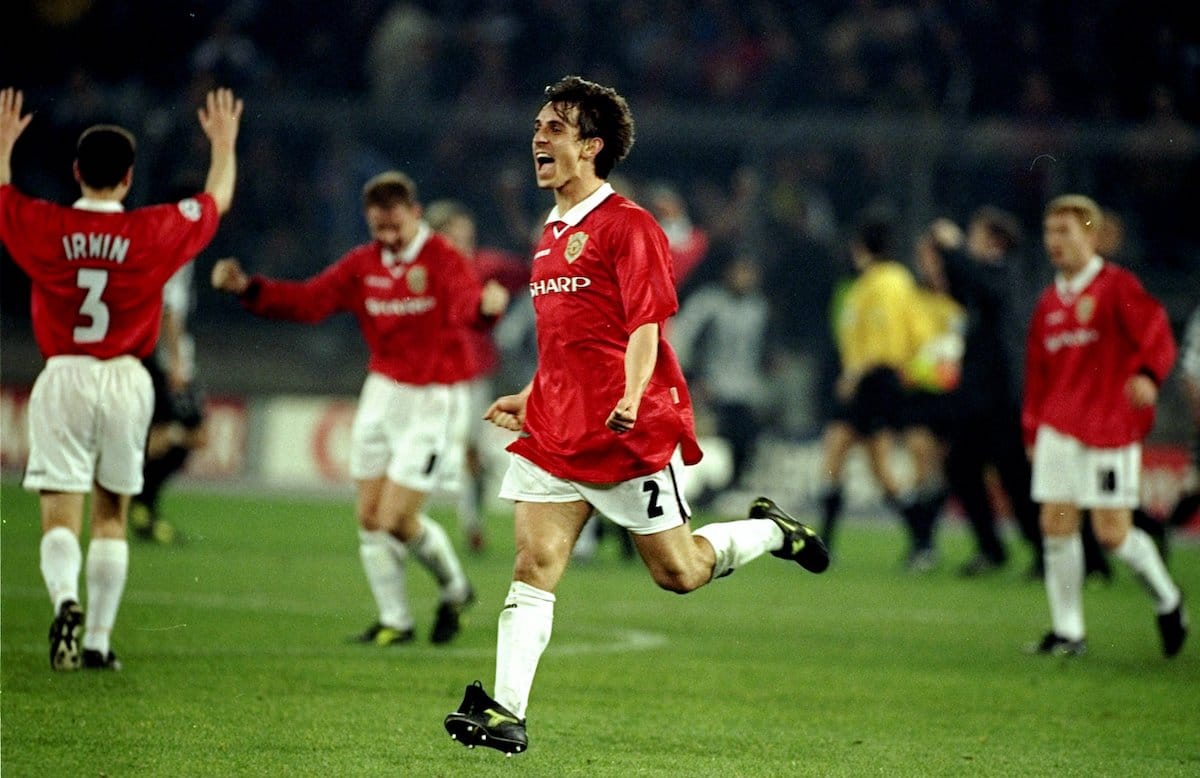 In his second book, My Autobiography, Ferguson wrote of Neville: “Gary would answer his shadow back. He had to have an argument every day…He's a forthright guy. Where he sees error, sees flaws, he attacks them.”

And while his contentious nature might have landed him in hot water from time to time, it also fed into his remarkable honesty with himself, never afraid to admit his failings, but damned if he wasn't going to work day and night to eradicate them.

Take, for example, his crossing ability. Spending a large chunk of his career playing directly behind David Beckham, a player who could make an argument for being the greatest crosser of a ball the game has ever seen, Neville was (literally) well placed to study the technicalities of producing top-quality centres.

With time, he became an expert and sending perfectly arced crosses towards the back post, begging to be dispatched by the likes of Andrew Cole, Dwight Yorke and Ruud van Nistelrooy. Where once Neville had been a marauding, overlapping full-back when attacking, he grew to add a new string to his bow, all through perseverance and a dedication to self-improvement.

Neville's crossing ability and positional intelligence served him well, making him a key part of eight title-winning campaigns, including the Treble of 1999, and two World Cups with England, right through his inevitable physical decline as he approached his mid-30s.

But Father Time could only be kept at bay for so long. Neville first thought of hanging up his boots in 2010, approaching Ferguson about the idea of calling it quits that summer. But the legendary manager convinced the full-back to give it one more season, playing on into the 2010/11 term. It was a step too far for Neville, though, as he quickly came to realise.

“The end came for me on New Year's Day, 2011 – and it came on a toilet at The Hawthorns,” Neville wrote in his autobiography, Red, of the moment he knew he couldn't continue at the highest level, at half-time, away to West Bromwich Albion. “It wasn't the way I'd have chosen to finish, but I knew for certain that this was my last game.

“After 18 years at Manchester United, after 602 first-team appearances, I was in the middle of playing for my team for the last time…I was making Jerome Thomas look like Ronaldo.

“It would have been even worse if the referee had spotted my trip on Graham Dorrans in the box. I deserved a red card; if justice had been done, my career would have finished there and then with a lonely, embarrassed walk to the dressing room.”

Former England colleague and Liverpool captain Steven Gerrard, despite their respective clubs' bitter rivalries, was always a great admirer of Neville's, but even he could see the writing was on the wall for the United skipper.

“Gary Neville was great player, especially the way he committed himself to every game,” Gerrard wrote in My Story, “but I remember watching him towards the end and it was painful. He was getting so many injuries and I could see he was struggling in one-on-one situations. That's hard to take when you've been a special player for so long.

“Gary was an unbelievable defender, and a force of nature running up and down the wing, but I think he went on for six months too long.”

It was an inauspicious end of a marvellous and glittering career, but it was also fitting: Neville, showing the self-awareness and brutal self-honesty that took him to the summit of the game, knew his time was up; without fuss or fanfare, he walked off into the sunset.