They recognised the number, but they didn't recognise the name.

Manchester United will go on to claim a historic treble by the end of the season. But here, at Highbury, in September 1998, they are a distance second best, and they are about to meet their latest tormentor.

Just five minutes after coming on to make his Arsenal debut, sporing the No.8 shirt vacated by the summer departure of club legend and record scorer Ian Wright, Karl Fredrik “Freddie” Ljungberg races clear of the static United defence and impudently loops the ball over Peter Schmeichel to cap a 3-0 rout.

It was while watching a handful of his Arsenal charges on international duty with England that Ljungberg first caught Arsène Wenger's eye.

The Three Lions were playing Sweden in a 1998 qualifier for Euro 2000. Wenger had tuned in to check up on David Seaman, Sol Campbell and Tony Adams, who all started in England's eventual 2-1 defeat in Stockholm, but his gaze was repeatedly drawn to the spiky-haired, 21-year-old attacking midfielder in yellow.

The Frenchman made the rare decision to bid for a player without having witnessed him in person, and Ljungberg was signed later that month. 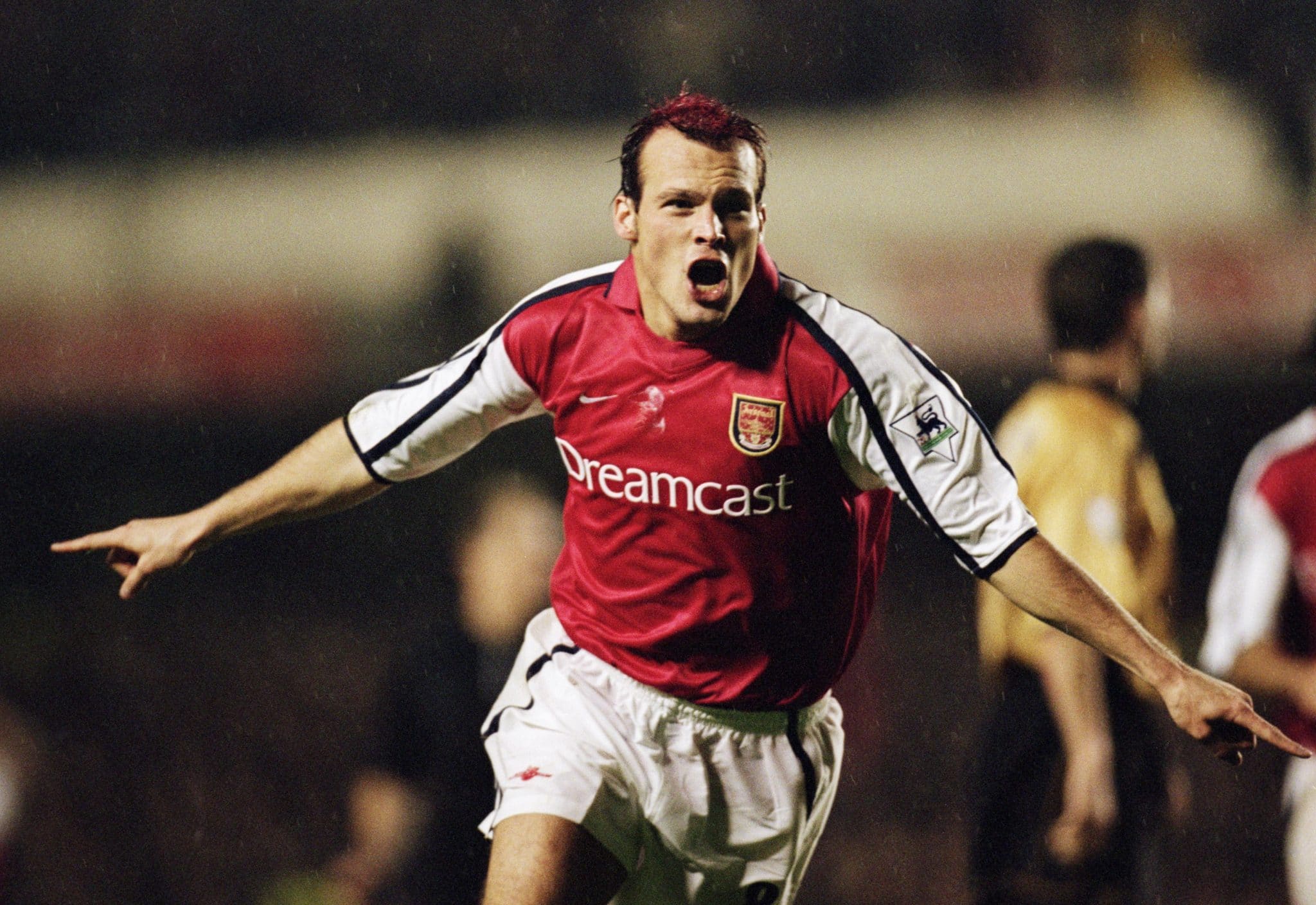 Whether his hair was spiked, streaked red or shaven, there was a certain punk style to the way Ljungberg played. Comfortable on either flank but at his best playing behind the strikers, he was all-action, rapid in his movement and unpredictable.

A master of seeking and dispatching chances inside the box, he was also a threat from distance, able to arrow shots into the bottom corner from any angle.

Arsenal were reigning Premier League champions when Ljungberg moved to Highbury, but it would be four years before they would return to the summit of the English game, as Manchester United recorded three successive titles.

But when that elusive title finally arrived, in the 2001/02 season, Ljungberg played a significant part in the restoration of Arsenal's crown. Trailing United in the title race going into the second half of the campaign, the Gunners put together a 13-game winning run to steal glory from their most competitive rivals.

Ljungberg was key during this streak, scoring crucial goals against West Ham United and Bolton Wanderers. When Arsenal travelled to Old Trafford in early May, they arrived knowing a win would clinch the title. Sylvain Wiltord rolled the only goal of the game beneath Fabien Barthez, a strike assisted by Ljungberg.

Ljungberg won the FA Cup three times during his nine years a Gunner. His first foray to the final of the world's oldest cup competition ended in heartbreak, though. Despite the Swede giving Arsenal the lead at the Millennium Stadium in Cardiff – where Cup finals were hosted while Wembley was being rebuilt – a late Michael Owen brace snatched victory for Liverpool.

Arsenal were back the following year, though, and this time they would not be denied. Ljungberg was again on the scoresheet, in spectacular fashion. Ray Parlour had already put Wenger's side 1-0 up against Chelsea with a stunning 25-yard effort, but Ljungberg's goal was even more outrageous.

Picking the ball up on the halfway line, the Swede made a beeline for goal, darting forward with trademark pace and determination. John Terry was left sprawling to the floor as Ljungberg twisted away from the England centre-back, before curling sumptuously beyond Carlo Cudicini from the edge of the penalty area.

The first of what would be a hat-trick of FA Cup winners' medals for Ljungberg was sealed, along with a league and cup double for Arsenal. And his place in history was cemented by one of the great FA Cup final goals, his 17th strike that season, a career high. 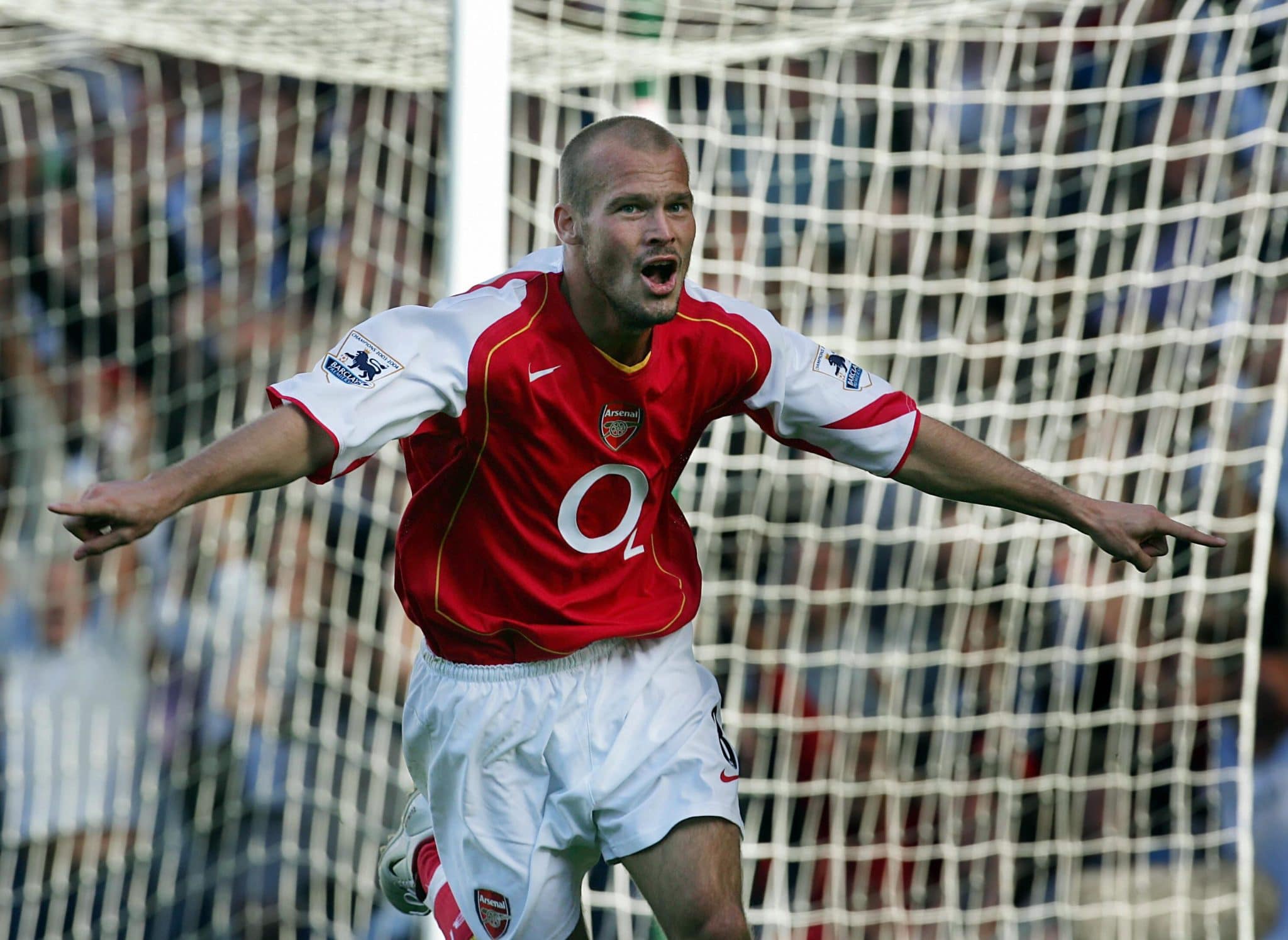 As Arsenal began to evolve into the side that would eventually become the ‘Invincibles', adding the likes of Robert Pires, Gilberto Silva and Kolo Touré, Ljungberg adapted his style.

With Pires on the left, Ljungberg would ordinarily start on the right side of midfield in the Gunners' 4-4-2 formation. But, while the Frenchman was a gifted, direct dribbler who revelled in beating his marker and manufacturing cut-backs for Thierry Henry and Dennis Bergkamp, Ljungberg was a less traditional wide man.

Instead, he would offer his customary goal threat and stealthy off-the-ball movement, working from outside to in, breaking beyond Bergkamp when the Dutchman dropped deep and providing a link between midfield and attack.

“He is the sort of player who sometimes doesn't touch the ball for five minutes,” then Arsenal captain Patrick Vieira wrote of Ljungberg in his 2005 autobiography, detailing the Swede's unique style, “but who can then turn a match with one touch of the ball, either because he creates the goal or scores it himself. He is a match winner.”

“He likes playing deep and, because he is highly intelligent and reads the game so well, he is very difficult to mark.”

Ljungberg remained an Arsenal player until 2008, when he joined West Ham for a single season. He was outstanding again in the campaign that followed the Gunners' miraculous unbeaten Premier League season of 2003/04, scoring 14 times and claiming a third and final FA Cup.

As the ‘Invincibles' began to be dismantled, though, Ljungberg's influence diminished. Though still a regular feature, his scoring prowess was de-emphasised, as he took up the position of wily veteran among the Arsenal midfield, his crisp, simple passing technique and intelligent link play instead coming to the fore.

Although he only scored twice in all competitions that year, Ljungberg was a key contributor in Arsenal's run to the Champions League final in 2006, where they were eventually beaten by the Barcelona of Ronaldinho, Deco and Samuel Eto'o.

Already underdogs, the Gunners' chances were further diminished in the Paris final by an early red card for goalkeeper Jens Lehmann. But they fought admirably, even taking the lead through a Sol Campbell header, foiled only by two late Barça goals.

And no Arsenal player put in more of a shift than Ljungberg, operating in a free role behind Henry in attack, pressing, harrying and scheming.

Two years after leaving West Ham for Major League Soccer, he returned to British football, although he only made eight appearances for Celtic. A short spell in Japan preceded his retirement in 2011, and in 2018 he became Arsenal's under-23 manager, passing on lessons in movement, determination and what it means to be a Gunner to the club's next generation.

Ljungberg is remembered as one of the finest goal-scoring midfielders in Premier League history, immortalised by his prominent place among the ‘Invincibles', for whom his versatility, intelligence and skill were key.

But for all the wonderful football that great side produced, it is often underestimated just how much their commitment, fire and will to win drove their success. These virtues were abundant in Ljungberg, a fact, of course, not lost on Wenger.

“He was an unbelievable fighter,” the legendary Arsenal boss told writer Amy Lawrence for her book Invincible. “Even in the Champions League final against Barcelona he was immense.

“He could find resources even when he was dead, because of his fighting spirit.”