Since it's formation in 1992, some of the best centre-forward's in world football have called the Premier League home. But none have ever possessed the perfect cocktail of attributes that make for ultimate defender's nightmare quite like Didier Drogba.

Combining pace and movement, power and finesse, undying workrate and indomitable will, Drogba, when fit and in form, couldn't be stopped.

The former Chelsea striker was almost flawless technically; his hold-up play was sublime, he could send rocketed shots on target from any angle, with either foot or head, he was blessed with a sound touch and had the individual skill to light up any game.

But everything he did – every shot, every surging run and every attempt to outfox his marker – carried a feat-of-stength element; a bludgeoning force that, when married with his technical gifts, was too much for any opposing defender to contend with.

Sighed from Marseille for £24million in the summer of 2004, the most expensive purchase of José Mourinho‘s initial splurge upon taking charge at Stamford Bridge, Drogba did not arrive in England as an unknown quantity; he had starred in OM's run to the previous season's UEFA Cup final, almost single-handedly destroying Newcastle United en route, before falling to Rafael Benítez's Valencia.

So Chelsea fans had an inkling about what they were getting in the shape of their fearsome new forward, who was 25 at the time – somewhat of a late bloomer on the European scene following spells with lesser French lights Le Mans and Guingamp.

However, the Stamford Bridge faithful could be forgiven for feeling somewhat underwhelmed by Drogba's maiden campaign in the English top flight.

Injury and inconsistency, perhaps brought on by a period of having to adjust to the unfamiliar lone-striker role in Mourinho's 4-3-3 system, meant he only started half of Chelsea's league games in 2004/05, sharing duties with Hernán Crespo and returning just ten goals.

His appetite for scoring in cup finals – a habit nurtured for great dividends in subsequent years – was whet, however, by an extra-time strike in February's 3-2 League Cup victory over Liverpool at Cardiff's Millennium Stadium.

Despite indifferent beginnings, Drogba's work ethic, physical presence and link play would have encouraged Mourinho, and the Portuguese tactician kept faith in the Ivorian, even though a second Premier League season brought only a two-goal improvement.

Everything clicked into place for Drogba in his third season with Chelsea; the assimilation, while perhaps slower than expected, was complete. For the first time in his career he bagged 20 league goals, contributing to an all-competitions tally of 33 in 60 appearances.

There could be no doubt about it any longer: Drogba was one of the best strikers in world football. And although Chelsea's Premier League crown slipped that season, their No.11 once again proved a match-winner when silverware was on the line, scoring the only goal of the 2007 FA Cup final, the first at the new Wembley, to give the Blues an extra-time victory over Manchester United. 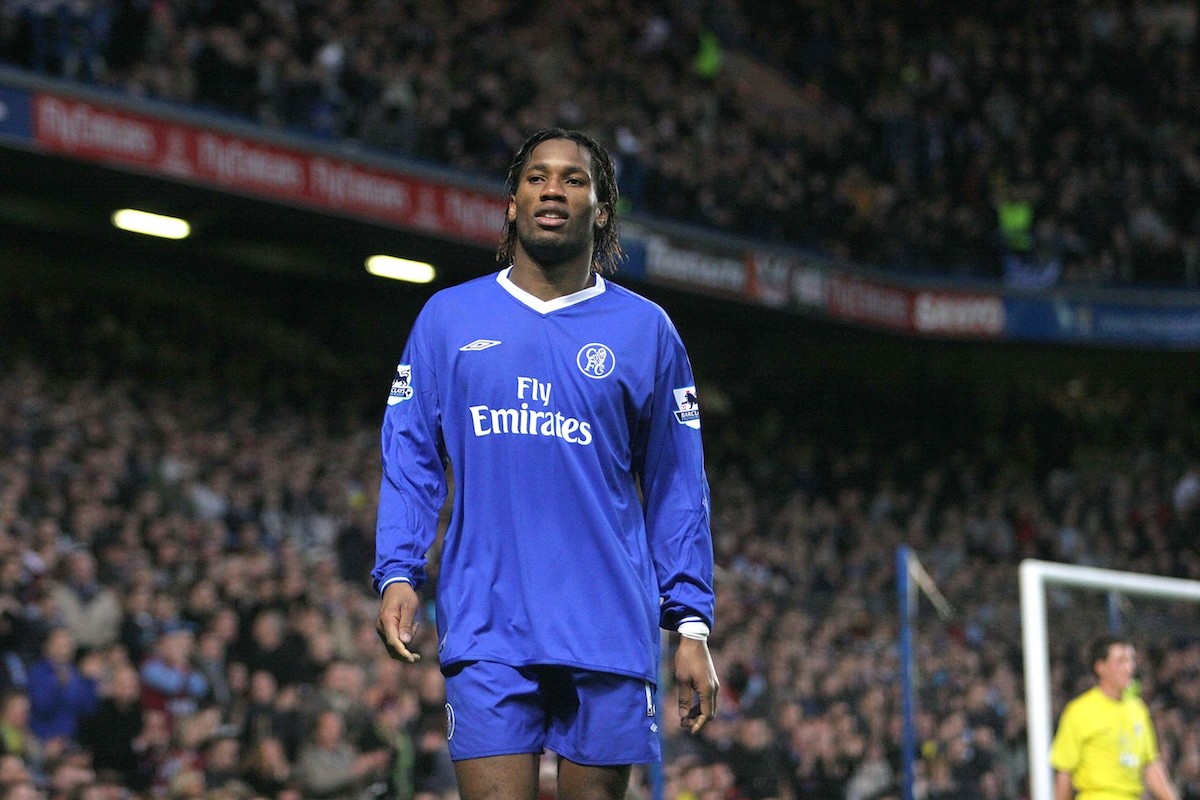 Drogba's newfound form proved short-lived, though. Following Mourinho's departure and the subsequent managerial uncertainty at the club, as Avram Grant, Luiz Felipe Scolari and Guus Hiddink played musical chairs in the Chelsea dugout, inconsistency crept back into the striker's game which, along with a string of injuries, restricted him to 43 Premier League outings and just 13 goals in two seasons.

It wasn't until the arrival of Carlo Ancelotti, the calm-exuding former Juventus and AC Milan boss, that Drogba was once again restored to his unplayable best.

Under the auspices of the Italian coach, Chelsea regained their Premier League title as part of a league and cup double in 2009/10. Drogba, now 31, enjoyed the most prolific campaign of his career, scoring 29 goals to claim his second Premier League Golden Boot and netting a career-high 37 across all competitions. 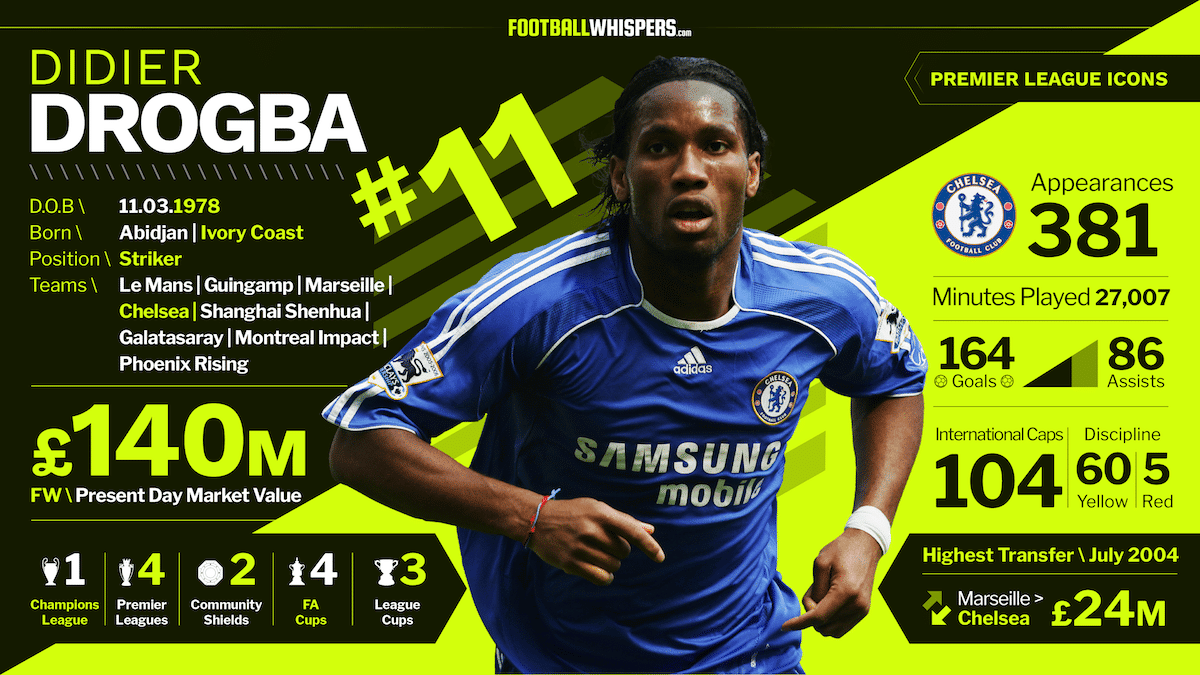 The £50million signing of Fernando Torres from Liverpool in January 2011 and the growing confidence of Nicolas Anelka meant the ageing Drobga was no longer a guaranteed starter much beyond that magical double-winning season. But the veteran hitman was afforded what would be his crowning glory at the end of the 2011/12 term.

Against all odds, the Blues reached the Champions League final under caretaker manager Roberto Di Matteo, seeing off pre-tournament favourites Barcelona along the way – and thus avenging a controversial loss to Pep Guardiola's Blaugrana in 2009, after which Drogba's furious post-match rant earned him a ban.

The final was to be held in the home stadium of Chelsea‘s opponents, Bayern Munich. Owing to their domestic struggles and the fact the German side appeared destined to make the most of their home advantage, few gave the Blues much hope. But in a final, with Drogba on your side, you always have a chance.

With his contract expiring at the end of the season, the Champions League final offered one last hurrah for Drogba as a Chelsea player; he wasn't about to pass that chance up.

The game was tense and, in many ways, unattractive. Chelsea's resolve was broken in the 83rd minute when Thomas Müller struck for Bayern. All seemed to be lost. But the Blues kept fighting. And when Juan Mata swung an inviting corner into the box in the 88th minute, there was only every going to be one head that met it. Drogba powered the ball into the net and the game into extra time. It was his ninth goal in nine cup finals with Chelsea.

With nothing separating the two exhausted sides in the additional period, Drogba displayed typical cool in dispatching the decisive penalty of the shootout, signing off in style before joining Chinese Super League side Shanghai Shenhua three days later.

There was to be one final chapter in Drogba's Chelsea romance, however, returning to the club in the summer of 2014 to reunite with Mourinho. At 36, he was only ever going to be utilised sparingly, and was perhaps brought back more for his dressing room influence than for anything he could offer on the pitch. But a fourth Premier League winners' medal acted as a fine golden handshake for the man voted Chelsea's all-time greatest player in 2012.

“Didier for me was amazing,” former team-mate and fellow Blues great Frank Lampard said of Drogba in an interview with Copa90 in 2017. “To have him in your team in a final, you felt Didier in the dressing room before a big game that it was a different Didier, he was like an animal.

“His preparation, the intensity in his eyes and then he always produced.”

Mourinho gushed in equally glittering terms over the Ivory Coast superstar in discussion with the Football Writers' Association in 2015, ahead of the ex-Chelsea No.11 being the guest of honour at the 2015 FWA Tribute Night at the Savoy Hotel.

“Throughout my career, I have always refused to say which is my favourite player or the best person,” the now-Manchester United boss said, “because so many have given soul and blood to play and to fight with me. But if I have to choose one who represents all the good things you want in a player and a man, I think in this moment I would choose Didier.”

In American sports, the term “clutch” is used to describe players who possess the invaluable gift of being able to perform, time and again, in high-pressure, high-stakes scenarios, making decisive contributions when it matters most.

Drogba was never the most consistent player, only twice breaking the 20-league-goal barrier in his career, juxtaposed with seasonal returns of ten, 12, eight, five, 11 and four in nine years with Chelsea. But Drogba is, unquestionably, the most clutch player of the Premier League era.