“Why put another layer of gold paint on the Bentley when you are losing the entire engine?” quipped Zinedine Zidane when Real Madrid sold Claude Makélélé and then signed David Beckham in the summer of 2003.

Real Madrid president Florentino Pérez was typically bullish in his post-sale assessment of the Frenchman, insisting he wasn't of the quality to retain his place within Los Blancos‘ star-studded selection. Makélélé was among Madrid's lowest-paid first-team players and, it seems, Pérez regarded the midfielder's request for a raise to be impudent.

“We will not miss Makélelé,” Pérez said, after the 30-year-old was sold to Chelsea for £16.8million. “His technique is average, he lacks the speed and skill to take the ball past opponents, and 99 per cent of his distribution either goes backwards or sideways.

“He wasn't a header of the ball and he rarely passed the ball more than three metres. Younger players will arrive who will cause Makélelé to be forgotten.”

Pérez had, of course, entirely missed the point: many of what he perceived as the player's deficiencies were exactly why Makélélé was so crucial, and so valued by his team-mates, at the Bernabéu.

Madrid had won the Champions League in his penultimate season with the club and La Liga the year after; in the first campaign without the hard-working midfielder, they finished fourth in the Spanish top flight.

Madrid's loss, though, was Chelsea‘s gain.

The Blues had been emboldened in the transfer market by the billions of new owner Roman Abramovich in 2003. Makélélé's arrival took their transfer spend for the summer beyond the £100million mark, a figure unprecedented at the time.

Taking a starting player from Real Madrid was certainly a coup for this emerging force, but Makélélé was 30 years old, expensive and had apparently been surplus to requirements in Spain. But the Frenchman's role in Chelsea's second-place Premier League finish – behind Arsenal's ‘Invincibles' – and run to the semi-final of the Champions League, coupled with Madrid's struggles in his absence, showed just how much the veteran still had to give. 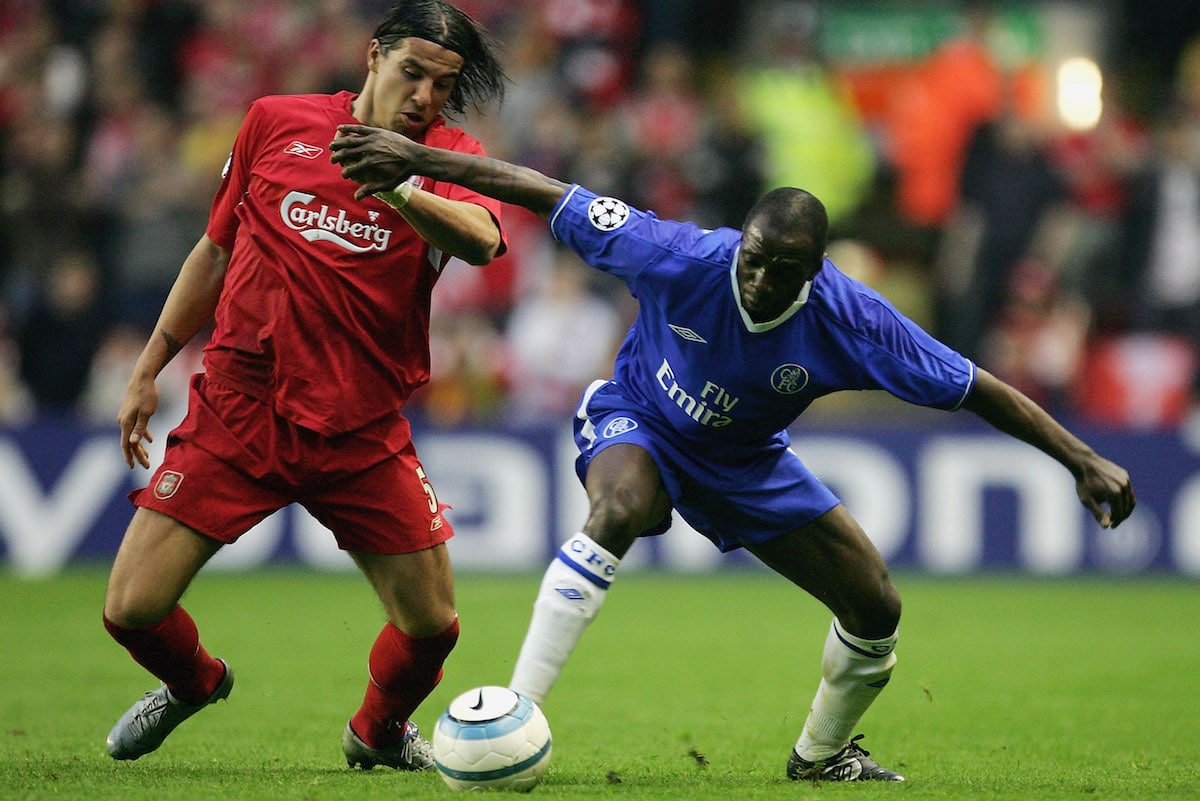 It was the following season, however, where Makélélé's true worth was fully realised. José Mourinho arrived at Stamford Bridge to replace Claudio Ranieri as manager, with the handsome, charismatic coach and self-proclaimed “Special One” fresh off the back of guiding Porto to an unlikely Champions League triumph.

Abramovich again spent big in the transfer market, bringing in Petr Čech, Didier Drogba and Arjen Robben, as well as a trio of Portuguese stars requested by Mourinho – Ricardo Carvalho and Paulo Ferreira from Porto and Thiago Mendes from Benfica. And the new manager adopted a 4-3-3 system with Makélélé at the base of midfield.

Chelsea romped to a first Premier League title, their 95 points accumulated setting a new record. It was another record, though, that better encapsulated what this über-efficient Blues side were about: they conceded just 15 goals in the 38-game league season.

The triumvirate of Čech and central defenders Carvalho and John Terry formed a near-impenetrable barrier in from to the Chelsea goal, but their jobs were unquestionably made easier by the protective presence of Makélélé. The former Nantes and Marseille midfielder offered little in the attacking third of the pitch, but his ball-winning skills and simple, safe distribution was unrivalled and invaluable.

Makélélé spent five successful years with Chelsea, playing the best football of his career despite edging further and further into his 30s, collecting two Premier League winners' medals, an FA Cup and two League Cups before joining Paris Saint-Germain in 2008.

His influence, however, continues to be felt in the Premier League to this day.

Zidane lamented similarly following Makélélé's Madrid departure: “Makélélé was the only one who always, always kept his position. He was the reference point and when he left we missed him.”

Before Makélélé reset the paradigm, Premier League midfields tended to consist of two players who could “go both ways”, effective in attacking and defensive situations, with the pair taking turns to go forward and hold back. This was the case with standout partnerships such Roy Keane and Paul Ince and later Keane and Paul Scholes at Manchester United, and Patrick Vieira and Emmanuel Petit at Arsenal.

Having seen the effectiveness of a specialist defensive midfielder in Makélélé, with the way his disciplined work eased the defensive burden of the team and allowed his attacking colleagues more freedom, rivals teams began to seek their own anchor man to play what was becoming known universally as the “Makélélé role”.

Mike Forde, Chelsea's former football operations director, gave an insight into Makélélé's unique abilities for Simon Kuper and Stefan Syzmanski's bestseller Soccernomics. “Most players are very active when they're aimed towards the opposition's goal, in terms of high-intensity activity,” Forde said. “If you look at Claude, 84 per cent of the time he did high-intensity work, it was when the opposition had the ball, which was twice as much as anyone else on the team.”

Remarkably, Makélélé was a latecomer to the role eventually named after him, as tactics writer Michael Cox observed in his book The Mixer: “Far from it being his natural position, Makélélé dropped deeper and sacrificed himself for the team in the autumn of his career”.

The Zaire-born player began his career in France as a winger with Nantes, before moving into a conventional central midfield remit when he joined Marseille in 1997. When he moved to Celta Vigo the following year, he was partnered in midfield by Mazinho, a World Cup winner with Brazil and father of Bayern Munich midfielder Thiago Alcântara and Barcelona's Rafinha.

In their relationship, Makélélé was the one with license to roam, while the experienced and disciplined Brazilian held the fort. It was Mazinho, though, whom the Frenchman credits with equipping him with the skills which later saw him thrive in a predominantly defensive remit with Madrid and Chelsea.

“He taught me how to move and what to do and gave me great tactical knowledge about managing the game and moving at speed,” Makélélé told Marca. “There are many different ways to play. You have to like working for the team rather than for yourself. ”

The Premier League has been home to some of modern football's greatest players since its formation in 1992, but few can claim to have truly impacted the division on a wider scale, with a clear demarkation between the time prior to their arrival and after their departure.

Eric Cantona was not only the catalyst for Manchester United‘s decades of dominance when he inspired them to the very first Premier League title, he also set a trend that rippled through the division, with several other clubs seeking an exotic forward who could play between the lines, a scorer and a creator in one – see Arsenal's subsequent purchase of Dennis Bergkamp and Chelsea's acquisition of Gianfranco Zola.

Thierry Henry can be said to have influenced the Premier League similarly, with strikers around the land looking to mimic his habit of drifting wide to find space before bursting back inside.

In this respect, Makélélé, in redefining a role which had previously gone without a name and without due recognition, is one of the most influential players of the Premier League era.