“I believe the target of anything in life should be to do it so well that it becomes an art.”

There are many great Arsène Wenger quotes but the above, given in an interview in 2009, underlines all what he always strived for during his 22 years as Arsenal manager.

His time at the club saw him become their most successful manager, with three Premier League titles and seven FA Cups, but Wenger’s legacy is measured in more than just pieces of silver.

For better and for worse, Wenger made everyone think a little differently about the Premier League and football in general. His dogmatic determination to a certain style and stubborn insistence on how Arsenal should be run as a club brought immense success, but also led to his downfall.

In October 1996, when a bespectacled “geography teacher”, as Lee Dixon famously described him, arrived from Grampus Eight – a club only known in England as Gary Linekar’s last hurrah – the Premier League was a far cry from the globalised beast it is today.

Wenger touched down in the afterglow of Three Lions-related Euro ‘96 nationalism and at the height of Oasis vs Blur, Britpop and the Spice Girls, with England, and London in particular, a cultural force across the western world. Cool Britannia and all that.

It was a very British time and it was echoed on the football field, as the 1996/97 season kicked off with the vast majority of the league’s 602 players from England and 19 of the 20 clubs run by a manager from the British Isles (Ruud Gullit at Chelsea the exception).

But Wenger strode in with an image a far cry from the grit of Sir Alex Ferguson or George Graham, the rough-and-ready honesty of Bryan Robson or Peter Reid, the happy-go-lucky charm of Harry Redknapp or Dave Bassett, and the energetic enthusiasm of Martin O’Neill or Gordon Strachan.

He was quiet, thoughtful and bookish, and didn’t speak in clichés. He was very un-British.

The league’s relationship with foreign coaches was also unremarkable. Dr. Jozef Venglos at Aston Villa and Ossie Ardiles at Tottenham Hotspur had been written off as daft experiments, after which traditional British managers Ron Atkinson and Gerry Francis soon righted the wrongs. Why would Wenger be any different, having succeeded Bruce Rioch?

Soon stories emerged of Wenger banning Mars bars and encouraging players to eat such radical foods as pasta, chicken and vegetables, and not drink alcohol to excess – a major problem at Arsenal in the early to mid-90s.

It was easy to laugh and mock but very soon Wenger’s methods cut through the old-school, insular mentality that had been allowed to foster.

In his first season, the Gunners finished third, missing out on the Champions League by virtue of goal difference, but that summer Wenger launched his first overhaul of the squad, and what can be considered the first act of his time at the club began. 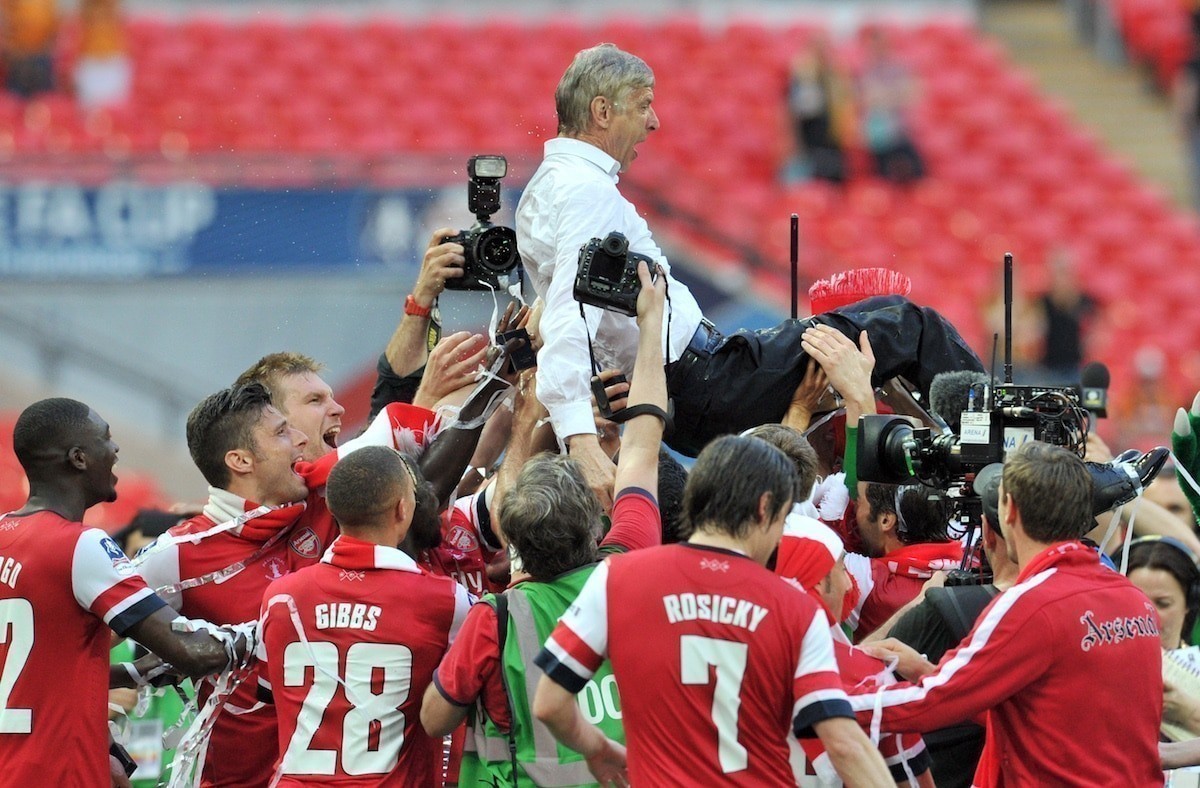 He already, of course, had a ready-made strike partnership in Ian Wright, in his swansong season, and Dennis Bergkamp, plus the midfield industry of Patrick Vieira, who had signed the previous summer on the secret knowledge Wenger was arriving, as well as Ray Parlour, who, with the notorious drinking sessions banned, was able to play to his full potential.

That combination of the tried-and-trusted security of the old Arsenal foundations added to the flair of Bergkamp and Overmars propelled the Gunners to a league and FA Cup double in 1997/98, as they overcame a 12-point deficit on Manchester United in February to end the season with nine consecutive victories.

It showcased Wenger’s coaching abilities, improving players and removing them from their comfort zone. His dietary measures helped prolong Adams and Dixon’s peak years well into their mid-30s, while he added consistency to Overmars and Parlour’s games and turned Petit and Vieira’s promise into genuine world-class ability.

Vieira, in particular, was a midfielder seldom seen on English shores. Long and rangy with an aggression and defensive diligence matched with brilliant vision and drive from the heart of the field.

The summer of 1998 brought the arrival of Thierry Henry to Highbury, a footballer who came to represent so much of what Wenger stood for on the field, playing with a sense of flamboyance, flair and romance.

So too began the rivalry he enjoyed and endured with Ferguson, who, having knocked Liverpool off their perch, had ideas of building a similar dynasty at Old Trafford, only for this plucky upstart from Strasbourg to come in and spoil the party, or at least disrupt it, as United still won four of the next five league titles.

Soon the old guard of Seaman, Adams, Bould, Dixon and Winterburn gave way, and a new defence had to be crafted, with Sol Campbell controversially plucked from Tottenham, the emergence of Ashley Cole from the academy and Lauren signed from Mallorca.

Wenger also continued to sign players previously considered unsuitable for the rough and tumble of English football and allow them to adapt, in Robert Pires, Edu, Gilberto Silva and Giovanni van Bronckhorst, albeit the latter having earned his spurs north of the border with Rangers.

All were signed for relatively minimal transfer fees, as Wenger’s eye for a player and vast knowledge of the market, coupled with clever scouting, bore fruit on the field and financially.

By 2003, Wenger had firmly re-established Arsenal as a major force, the second-biggest club in English football, and work was underway to build a stadium befitting of their growing appeal.

The 2003/04 season then delivered the coup de grace for Wenger, as the ‘Invincibles’ went the entire season unbeaten – 26 wins, 12 draws – after a summer of minimal transfer spending amid United’s financial might and the birth of Roman Abramovich’s Chelsea.

It represented a gargantuan achievement but also, in many ways, the beginning of the end for Wenger’s pure vision of what he wanted and thought Arsenal could be. 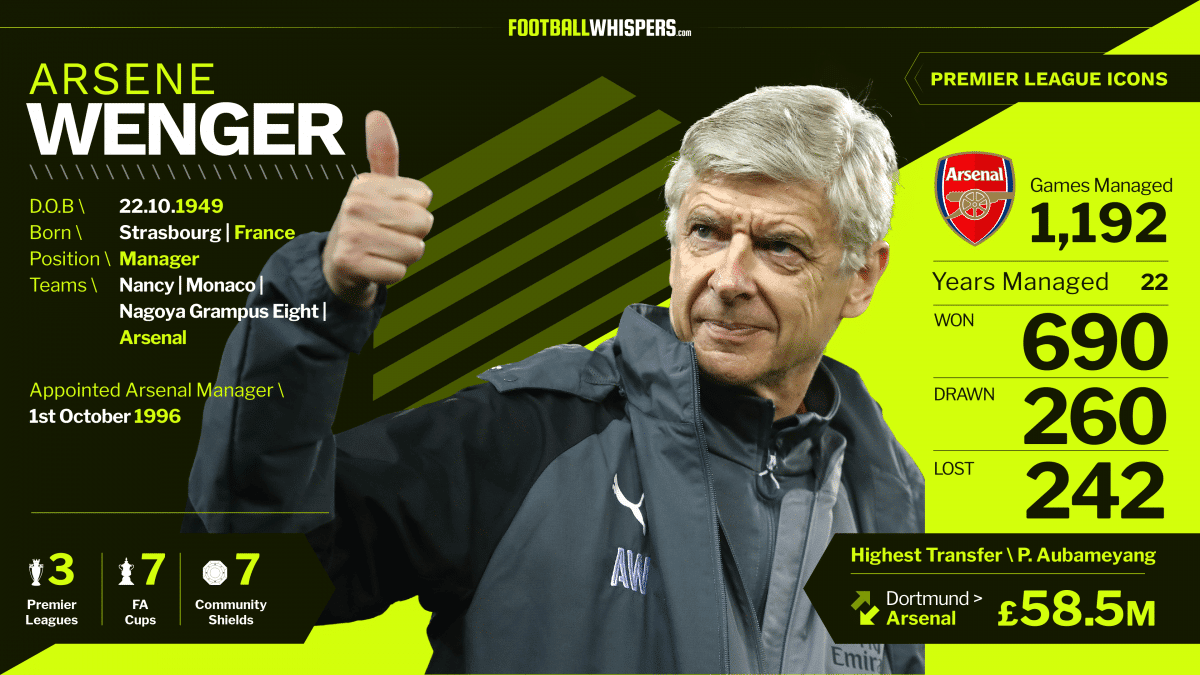 Abramovich changed the landscape with mega-spending under José Mourinho, seeing the Blues soon become the major power in the Premier League, also snatching Cole from Arsenal in 2006 with financial promises beyond the Gunners’ method and means.

Wenger did battle on with a new Arsenal, built around Cesc Fàbregas and Robin van Persie, but his transfer proficiency was beginning to lag as other clubs mimicked him, while the move to the Emirates neutered them further.

Abu Dhabi United Group’s purchase of Manchester City in 2008 then further destroyed Wenger’s ideals, as transfer fees were sent even further into the stratosphere, and as he stuck to his principles, Gulf petrodollars prised Samir Nasri, Emmanuel Adebayor, Kolo Touré and Gaël Clichy away, while Henry and Fàbregas left for Barcelona.

It was symbolic that the “financial doping” Wenger was so vocal in avoiding is what ripped his third era of Arsenal apart; an ultimately unsuccessful period, but one characterised by what-ifs, as we never got to see how good that group of players could be together.

Wenger redrew his playbook and instead tried to reshape his team with British sensibilities; Theo Walcott, Aaron Ramsey, Alex Oxlade-Chamberlain, Carl Jenkinson and Calum Chambers all arrived, with the hope they would match their ability with a loyalty lacking in his foreign fledglings.

But that, of course, never came to pass, and as City had joined Chelsea and United in packing a financial punch few to compete with, able to reshape their team from one season to next, Wenger pressed on with the admirable belief patience was still a virtue in football.

Frustration began to stir in the expensive seats of the Emirates, as the success that had become commonplace in the early part of the decade seemed increasingly distant.

Instead, fourth place became their trophy, with the FA Cup wins in 2014, 2015 and 2017 sadly significant outside of Islington in only the additional years they enabled their manager to remain.

The club had become more about balance sheets than the ball, with Wenger’s ability to guarantee Champions League football keeping absent majority shareholder Stan Kroenke satisfied, but each season they drifted further from England’s elite.

Arsenal under Wenger became a club divided, and the generation gap was a chasm. There was now a group of fans who only knew the Gunners to be also-rans, not the pure power of yesteryear. Wenger’s stubbornness softened with the record purchase of Mesut Özil, but it was all too late.

Özil also came to represent what Arsenal had become, with performances of absolute brilliance undone by anonymity and a seeming lack of stomach. In truth, the German lacked support, as continual deficiencies – defence and central midfield – were never properly addressed.

It’s also damning that a pet project such as Oxlade-Chamberlain never came anywhere near fruition, but within less than a season at Liverpool looks to be the player Wenger envisaged when he signed him from Southampton. Serge Gnabry, now of Bayern Munich, is another example.

Wenger’s time at Arsenal can ultimately be spilt into three acts: revolution, rebuilding and retraction. The first was solely engineered by his unique approach to the game, the middle a result of external factors out of his control, and the third the unfortunate consequence of the first two.

However, through each he left an undeniable mark of the Premier League, opening it up to the world, bringing a different style of play and players into the division and showcasing new ways for managers and clubs to identify and improve players. That alone was his art.