Even as the game grows ever faster, with pace becoming the most prized asset a player can possess and speed of play often seen as being synonymous with entertainment, football reserves a special place of prominence for its thinkers, the players who seem able to slow time, always staying one step ahead of their more athletic peers.

Never has the cliché of a player not needing pace because “the first yard's in his head” been used so often as in describing former England striker Teddy Sheringham.

As a 16-year-old at Millwall in the mid-1980s, an era in which, by and large, if you weren't fast, you'd better be big, Sheringham was neither. And because of that he was deemed too slow to cut it in the old Second Division.

However, almost quarter of a century before Lionel Messi, Andrés Iniesta and Xavi sought to redefine the physical requirements of top-level footballers under Pep Guardiola at Barcelona, Sheringham was showing that technique is king.

He would, of course, tower over the diminutive Barça trio, standing at 6ft 1ins, but, stood next to his Lions' strike partner Tony Cascarino, the scrawny East Londoner had to earn his stripes through touch, vision and his ability to find space.

Alongside the towering Republic of Ireland international, Sheringham not only proved that he could survive in the Millwall first team, he spearheaded the club's promotion to the top flight for the first time ever in 1987, was top scorer in four different seasons, and was the South London side's all-time leading scorer, with 111 goals by the time he left The Den to join Nottingham Forest in 1992.

Despite subsequent spells with Tottenham Hotspur, a trophy-laden four seasons with Manchester United and playing in major international tournaments with England, Sheringham looks back on his time with Millwall as the best of his career.

“People are always very surprised when I mention Millwall as my best time,” he told FourFourTwo earlier this year. “We all came through the ranks together … from youth team football to reserves, then getting into the first team and having success by getting to the top flight for the first time in the club's history.

“It was just amazing times and to do it with your young lads growing up and hoping to achieve, and then managing it and getting it together was really fulfilling times as a young footballer.”

In little more than a year at Forest, Sheringham worked under legendary manager Brian Clough and formed a potent strike partnership with the boss' son, Nigel.

His City Ground stay was fleeting, however, sold to Tottenham for £2.1million three games into the 1992/93 season – the Premier League's inaugural campaign – shortly after becoming the first player to score live of Sky in the newly rebranded top flight. Forests' failure to replace their man who'd bagged 20 goals the term before contributed in their relegation.

His spell with Millwall may be the time he looks back upon most fondly, but Sheringham grew most as a player with Spurs, and produced some of the best football of his career at White Hart Lane.

He hit the net 99 times in his first, five-season spell with Tottenham, but his cult-hero status in North London was not attained through goals alone. His savvy intelligence, unique ability to conjure something from nothing and flawless technique endeared him to the Spurs faithful, who have a discerning eye for gifted attacking players. 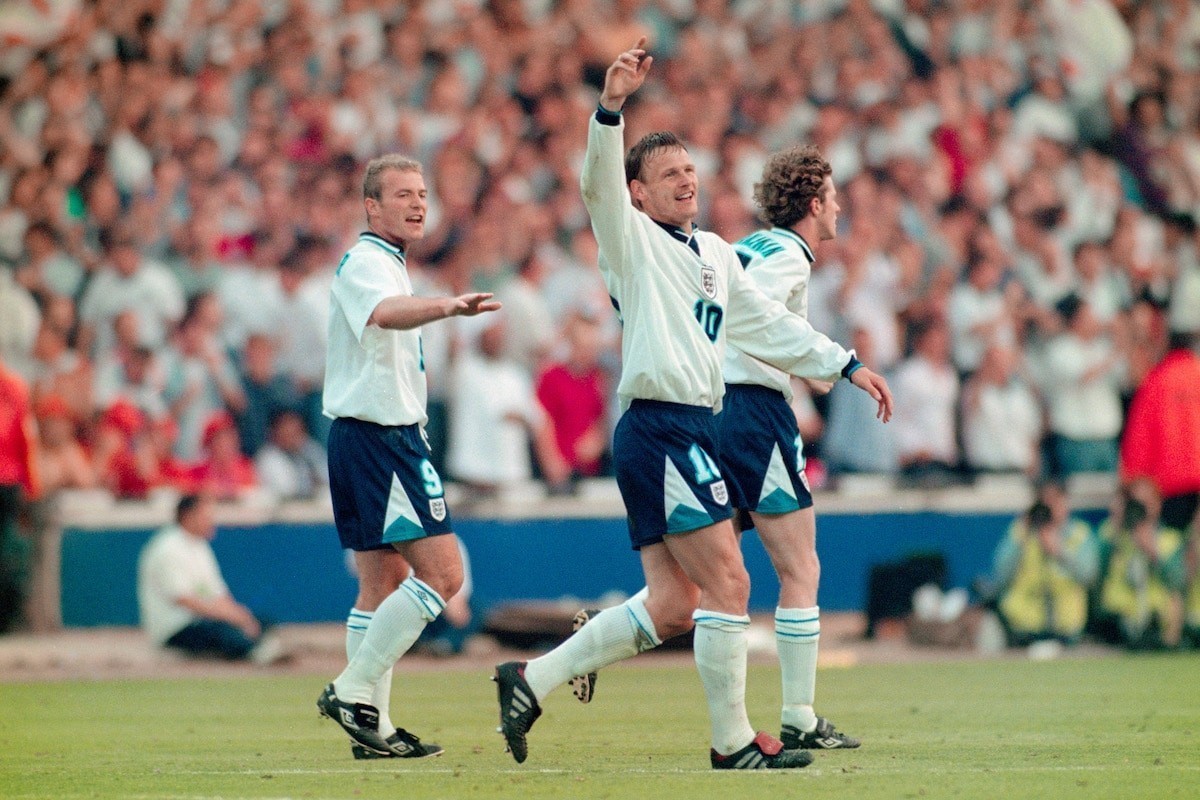 Eric Cantona's retirement from football at the end of the 1996/97 season took the world by surprise. The enigmatic Frenchman was only 31 and still at the peak of his powers, captaining a new-look, youthful Manchester United side who appeared on the verge of a major breakthrough in Europe, having lost narrowly to Borussia Dortmund in that season's Champions League semi-final.

Unexpectedly tasked with replacing quite possibly the best player that'd fallen under his auspices at that point of his career, many might have expected Alex Ferguson to break the club's transfer record, scouring the continent for a player capable of filling Cantona's boots – a Zinédine Zidane or an Alessandro del Piero perhaps.

But the wily Scot, with a famous eye for a bargain, elected to cast his net a little closer to home, convincing Sheringham to make the Theatre of Dreams his new home, setting the Red Devils back just £3.5million.

In truth, Sheringham's arrival at Old Trafford was hardly greeted with excitement and wonder. Many United fans had their hearts set on a more exotic purchase, not a player who, at 31, might well have his best days behind him. And, in fairness, it took the England striker a while to really exert his influence in a red shirt, returning just 11 Premier League goals in his first two seasons at the club.

But the importance of Sheringham's contribution during his four years at Old Trafford cannot be underestimated. Not least because of the role he played in securing a historic Treble for the Red Devils in the 1998/99 season.

He had fallen firmly behind Andy Cole and Dwight Yorke in the pecking order that term, with the pair striking up arguably the greatest partnership the Premier League has ever seen, while Sheringham found the net just twice in the league.

However, the experienced striker proved himself to be a man for the big occasions. When Roy Keane was forced off the field with an injury nine minutes into the FA Cup final against Newcastle United at Wembley, it was Sheringham who replaced the combative skipper, scoring the opening goal in a 2-0 win and eventually being voted man of the match.

With two thirds of their objective in the bag, Sheringham was once again a substitute when United faced Bayern Munich in the Champions League final at the Camp Nou.

As Ferguson's side slipped behind to an early Mario Basler free-kick and struggled to get themselves back into the game, the manager gambled, taking off Swedish winger Jesper Blomqvist and introducing Sheringham, telling the former Spurs striker: “Go and get us a goal, son.” 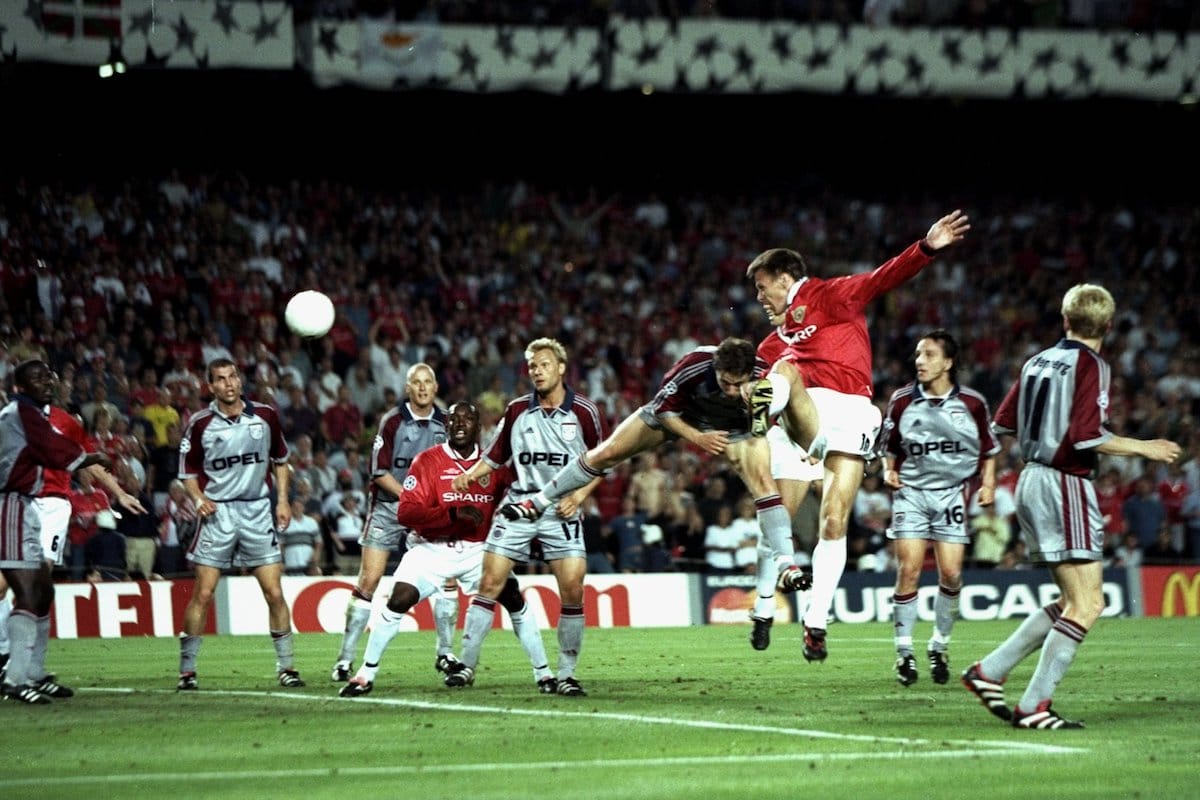 Not always known for toeing the line throughout his career, this time Sheringham obeyed his manager's instruction, sweeping home a dramatic stoppage-time equaliser.

But he and his side were not done. From a corner seconds later, the United No.10 flicked on David Beckham's delivery for Ole Gunnar Solskjær to stab in a winner at the far post. Sheringham's place in the Old Trafford club's history was assured.

Throughout their four years together on the red side of Manchester, Sheringham and Cole never exchanged a word, with the pair not seeing eye to eye after Cole perceived the ex-Millwall man to have snubbed his handshake when replacing him in an England game in 1995.

Yet it is to both men's credit that their personal grievance never got in the way of their ability to play together, averaging a goal every 84.8 minutes as a partnership.

Sheringham's finest individual season as a United player, and perhaps even of his career, came in 2000-01, at the age of 35, winning the PFA Players' Player of the Year and FWA Footballer of the Year awards for his contribution to the Red Devils' third successive Premier League title, scoring 21 goals in all competitions.

After that, he returned to Tottenham, further augmenting his legacy with the club, notching a thoroughly respectable 26 goals in two seasons. From there, spells at Portsmouth and West Ham United – the club he'd supported as a boy – followed, with Sheringham becoming the oldest outfield player to play in the Premier League, his last game for the Hammers coming at the age of 40 years and 270 days.

An international career that spanned nine years saw Sheringham score 11 England goals in 51 caps. His crowning moment with the Three Lions was undoubtedly Euro 96, the tournament held on home soil which forged memories cherished by a generation of England supporters.

A controversial figure in the build-up to the championships, Sheringham was one of a handful of England players photographed playing drinking games in a dentists' chair during the team's pre-tournament tour of the Far East – an incident later immortalised by Paul Gascoigne's iconic goal celebration after his stunning volley versus Scotland.

But when the tournament began, Sheringham was elected to partner Alan Shearer in attack, a testament to his standing in the game given that England were able to call upon such top-class strikers as Robbie Fowler, Les Ferdinand, Ian Wright and Cole in that era.

England's eventual agonising exit on penalties to Germany in the semi-finals put paid to any hopes of football truly coming home, but the 4-1 win over Holland in the final group game is still regarded as one of the greatest performance in Three Lions history, and Sheringham played no small part.

It was his finest game in an England shirt, scoring twice and, in a move that encapsulated his style, demeanour and philosophy, unselfishly squaring for Shearer to finish off a sweeping move when he was well within rights to shoot for goal himself.

He called time on his career after brief stint with Colchester in the Championship in 2008. Despite existing in a time when the game was getting faster, with pace a commodity of ever-increasing value, Sheringham, with his more deliberate, considered approach, remained not only relevant but a difference-maker.

Sheringham played through three generations – from the last embers of the old First Division, to the advent of the Premier League, and on to the period when the English game evolved into a continental benchmark – and, rather than being left behind, he bent the game to his will; a yard in his head and the skeleton key to unlock any defence in his pocket.