When footballers, past or present, are asked to pick an XI of great players, there is usually a bias towards former club or international team-mates. It’s almost a given.

Back in 2013, ITV filmed a documentary with Roy Keane and Patrick Vieira called ‘Best of Enemies’. It focused on the midfield duo and their heated relationship during their amazing careers.

At the end, they had to pick a combined Manchester United and Arsenal XI. One name who was perhaps surprisingly unanimous was that of French winger Robert Pirès.

Vieira’s selection was expected, his team-mate is part of the unforgettable Invincibles side, but for Keane to, without argument, pick him too, says so much about where the Frenchman stands among his peers in the annals of Premier League history.

Pirès had a style and a manner previously unseen in England. Not as flashy as David Ginola, but not a pacy winger like fellow Arsenal hero Mark Overmars. He was technically gifted, with the vision and guile to drop the shoulder and come inside off the left flank. An inverted winger before his time.

“Pirès means the world to Arsenal fans,” Life-long Gunners fan Stephen Jessup-Peacock gushed to Football Whispers. “His skill, talent & charisma are one the true highlights of our unbeaten season. He was a different type of personality than we were used to, but his general brilliance on & off the field put him straight in our hearts.”

It was at Metz where he developed from a playmaker to an option on the left. Then assistant coach, Philippe Hinschberger, suggested the change. At the time, it was very rare to see right-footed players on the opposite flank, but it was a tactical change that gave him an edge that he carried on throughout his career.

Labelled “Le Canard”, French for duck, as soon as onlookers witnessed his awkward running style, it’s a nickname that stuck. Pirès embraced it though, even using it for the name of his autobiography, “Les Canards Ne Savent Pas Tacler” – Ducks Can’t Tackle.

It didn’t stop the Frenchman from beating defenders. Deceptively quick, he played with his head up and was clearly someone with the intelligence and creativity to go to the very top.

A graduate of the Metz academy, it was after playing his part for France as they won the 1998 World Cup that he made the £5million switch to Marseille. Although even the player himself is unsure if his time on the south-coast was a success, moving to the most popular team in France was crucial for his subsequent arrival in North London.

Replacing Mark Overmars in Arsène Wenger’s midfield, there was always going to be a period of adjustment, but the fans were cold to the Frenchman’s arrival.

A small section of fans at Highbury would whistle and boo whenever Pirès made a bad pass or mis-controlled the ball. That uneasy reception forced the player to doubt whether he had made the right decision.

It’s no surprise that he credits Wenger for his eventual improvement and gradual adaptation to the English game.

Playing away at Sunderland, Pirès thought he would make his debut in the North East, but his new French boss told him to sit on the bench, mostly to get an idea of what life in England had in store for the winger.

“After 20 minutes, I said to myself ‘what the hell am I doing here?!’” he told French Football Weekly's Jeremy Smith in a lengthy interview. “The physicality! And then Vieira was flattened by a terrible tackle! Pffft. And I said to myself ‘what am I doing here?’ But he was right, Arsène. I watched, I learnt, I spent a few matches on the bench, and that’s how you progress.”

Pirès was already a hero in his home country, even though his two seasons in Marseille were mixed, it was with Les Bleus he made his mark in two crucial moments.

It could be said that he was one player to greatly benefit from the new FIFA Golden Goal rule. In ’98 it was his cross that David Trezeguet chested down for Laurent Blanc to fire France past Paraguay in the Round of 16. 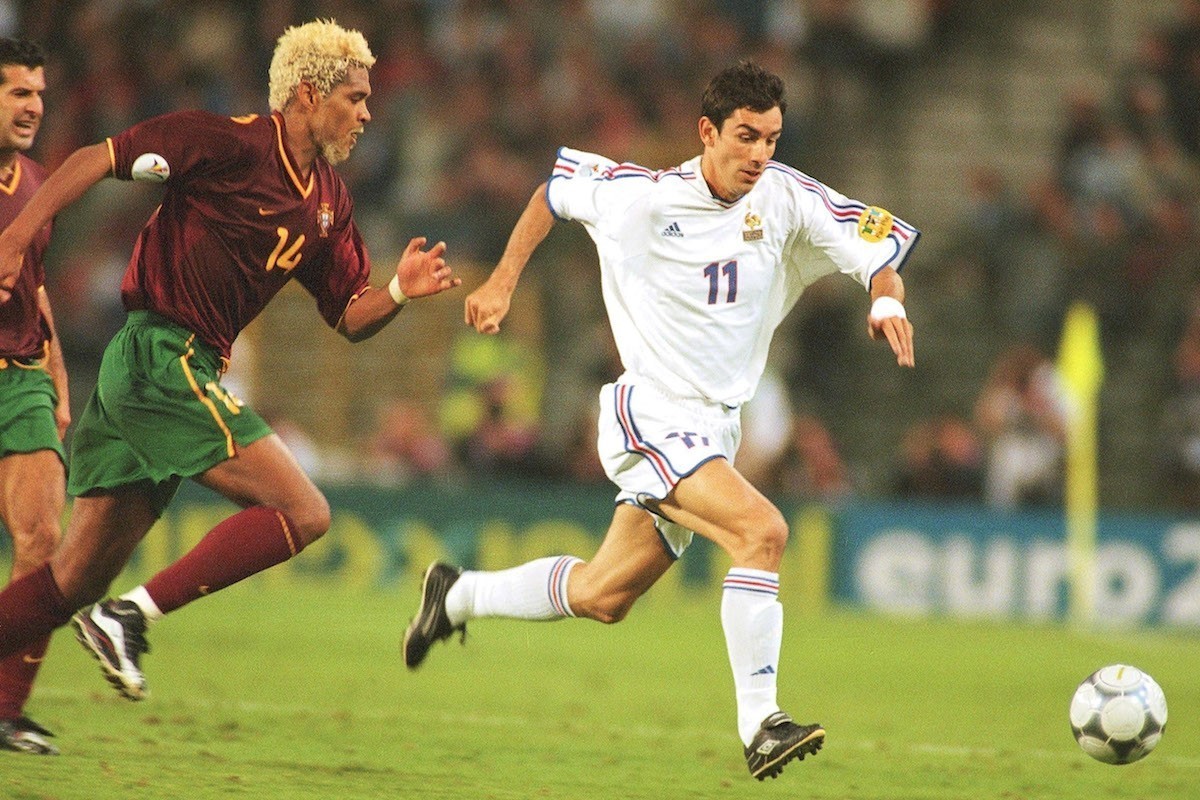 Then, in the final of Euro 2000, it was Pirès’ cross that picked out Trezeguet for the goal that completed their comeback over Italy in the 2-1 win.

Picking the ball up in the left-back role, the Frenchman jinked past two defenders, delivering a cross with his weaker left-foot before his team-mate smashed it beyond Francesco Toldo.

“It was weird because Roger Lemerre called me and said: “you will get on the pitch and replace Bixente Lizarazu, and you will play as a left-back.” He told UEFA.tv. “I thought it was a weird substitution, and on top of that it was the 86th minute!

“I thought I wouldn’t really be able to contribute to anything. But in the end the coach was right.”

Going from a national hero to Arsenal was a testing period of his career, but with Wenger as his mentor, Pirès would improve and take his club success to new heights.

He attributes the teachings of Le Professor, to the player he became. Praising the way the French coach makes you work on your strengths, rather than improving your weaknesses.

During his first season in London, Pirès played 33 league games, scoring four times and adding one assist, then three years later, as the Gunners swept everyone before them, his numbers were outstanding.

In 36 Premier League appearances, he found the net an incredible 14 times and added an equally stunning 11 assists.

For a player who always valued finding a pass and setting up a team-mate as much as scoring himself, both numbers are true reflection of the magic he was capable of producing.

“Robert Pires was a beautiful player and man, both on and off the pitch,” Arsenal fan and sports journalist Natasha Henry told Football Whispers. “He'll definitely go down in the memory as one of the most creative players in the Premier League during that era.

Finishing with two league winners' medals and named in the PFA Team of the Year three years in a row, it's clear that Pirès was a winner, regardless of what came after his time at Arsenal and the disappointment of being subbed following Jens Lehmann's red card in the 2005/06 Champions League final.

It was his unselfishness, and his kind and friendly demeanour that helped Gunners eventually take him into their hearts, both as a player and as a man.

You don’t have to look far to find a list of Arsenal legends: Thierry Henry, Dennis Bergkamp, Tony Adams and Ian Wright, all play their part in the London side's rich history.

The club and the city are now a huge part of Pirès' life, with the Frenchman setting up home in the English capital. Arsenal will always a place in his heart and his position as an Arsenal and Premier League icon should never be forgotten.