Wolverhampton Wanderers could be the victims of post-tournament poachers with Liverpool, Tottenham Hotspur and Arsenal all looking to sign Morgan Gibbs-White after he impressed as part of the England Under-17 team to win the World Cup in October.

According to recent reports in the Daily Mail, it’s Liverpool who are leading the chasing pack and could wrap up a £5million deal to bring the Stafford-born midfielder to Merseyside during the January transfer window.

Gibbs-White has just the 18 months remaining on his current contract and the Championship leaders can’t offer him a new deal until he turns 18 in January. It’s a window of opportunity and the big clubs in the Premier League are looking to take full advantage of this.

Liverpool will be hopeful of righting their wrongs of the past having missed out on Dele Alli – a player Gibbs-White would share similarities with if he made the step up to become a success story just as Alli did with Spurs. The Reds want to add to their already impressive array of talent within their academy by adding Gibbs-White to the mix now.

Mauricio Pochettino is keen to add to his ever growing hub of English players while Arsenal are looking to snare a potential world class midfielder to their ranks having missed out on Jadon Sancho in the summer.

Though £5million for a 17-year-old with fewer than ten appearances to his name seems steep, if he develops as expected this will look like a bargain down the line, especially when you factor in the English premium added to these homegrown players.

Liverpool, Spurs and Arsenal are all looking to be proactive in their recruitment of youngsters. Gibbs-White has been at Molineux for close to a decade now having joined their academy aged eight but it’s difficult to turn down clubs regularly competing in the Champions League.

What are Gibbs-White’s main strengths?

When watching him play it’s clear to see why so many clubs are battling it out for his signature. He can operate in a number of roles: centre-midfield, attacking-midfield and even as a striker if required. Versatility is the norm these days but it’s not something to be overlooked.

What really allows the youngster to stand out is his intelligence. In the modern game there are a variety of ways to approach matches. Teams sometimes look to sacrifice space in order to stay in compact defensive lines or alternatively they press high looking to win the ball in dangerous areas. In both instances you need players who can break these lines, whether it’s a low defensive block or an intense press.

Gibbs-White has that ability.

He’s perpetually glancing over his shoulder to build up a picture of what’s behind him and he tries to receive the ball on the half-turn so that he’s able to spin away from any danger. That’s why he’s considered to be press resistant.

The 17-year-old also has the vision and the ability to execute passes from deeper areas, the sort that bypass the midfield line and get his team in behind. He does this with great haste, which is why why he’d be a valuable weapon for a team looking to break down opponents sitting deep. You see these traits in the pictures below. 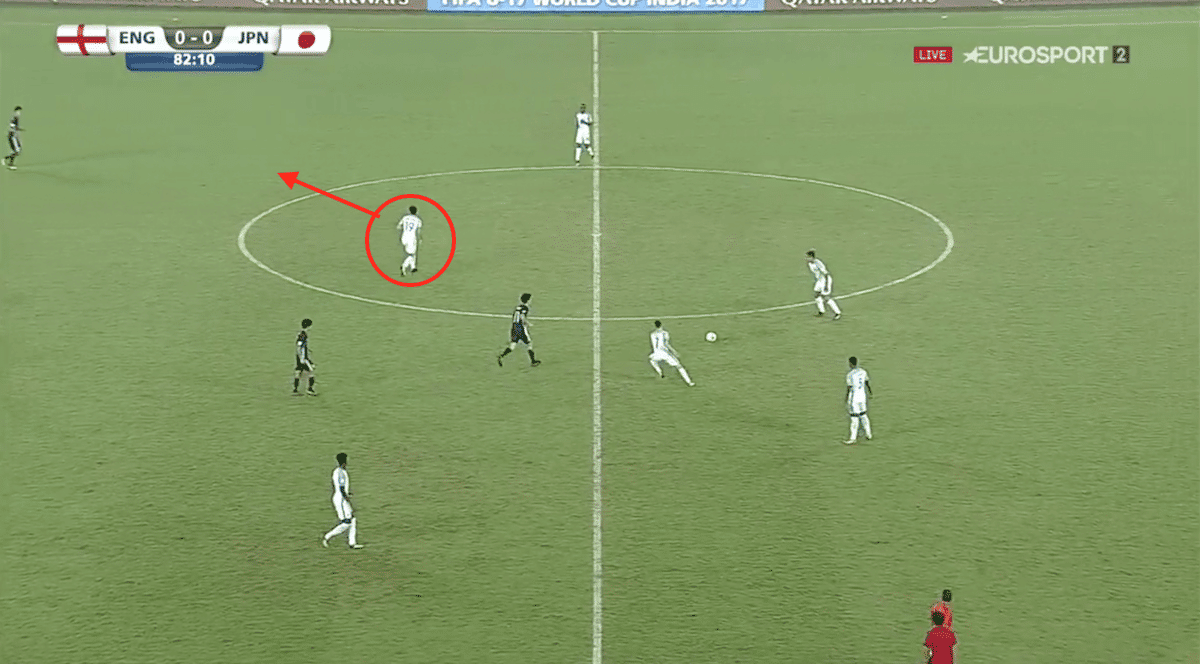 Here Gibbs-White is circled in red. You can see he's looking over his shoulder. He doesn't let the look linger, it's just a quick glance before he looks at the ball again and readies himself to receive the pass from the centre-back. 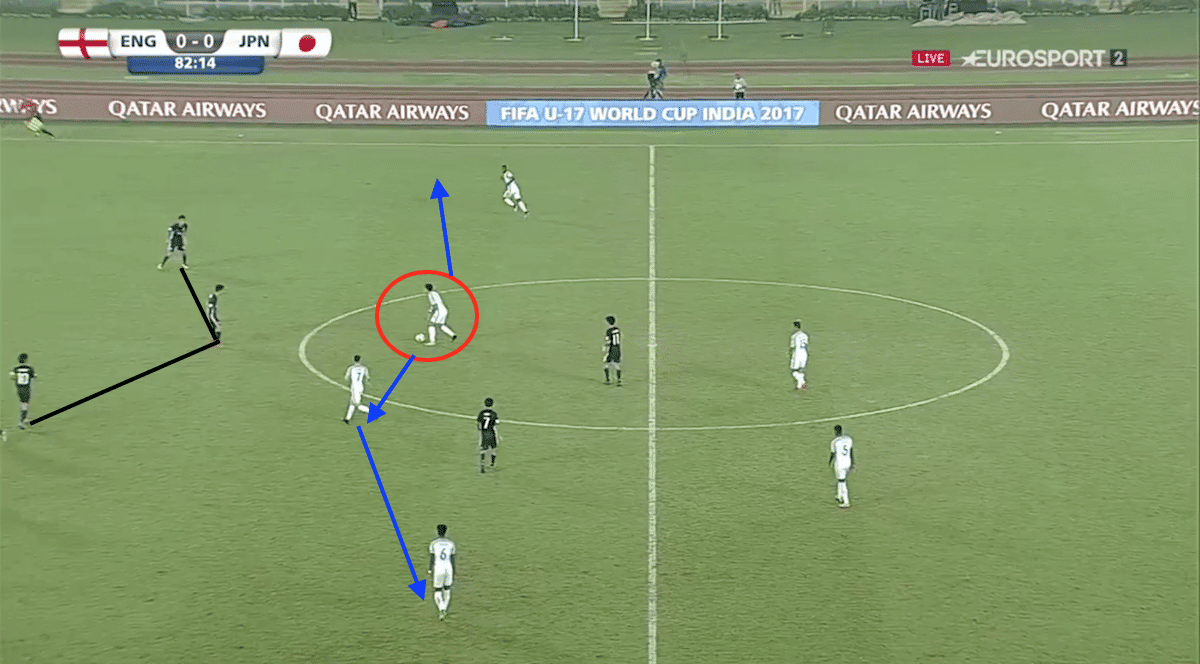 He picks the pass up on the half-turn and quickly faces the opposition's goal and is fronted up by a line of three players. He's got easy passes on either side of him. He could opt to pass to his left to Manchester City's Phil Foden who could then work the ball to the left-back if they want to look to stretch the Japanese team.

Alternatively he could play the ball to his right, to the right-back, in an attempt to utilise the space down that side of the pitch. 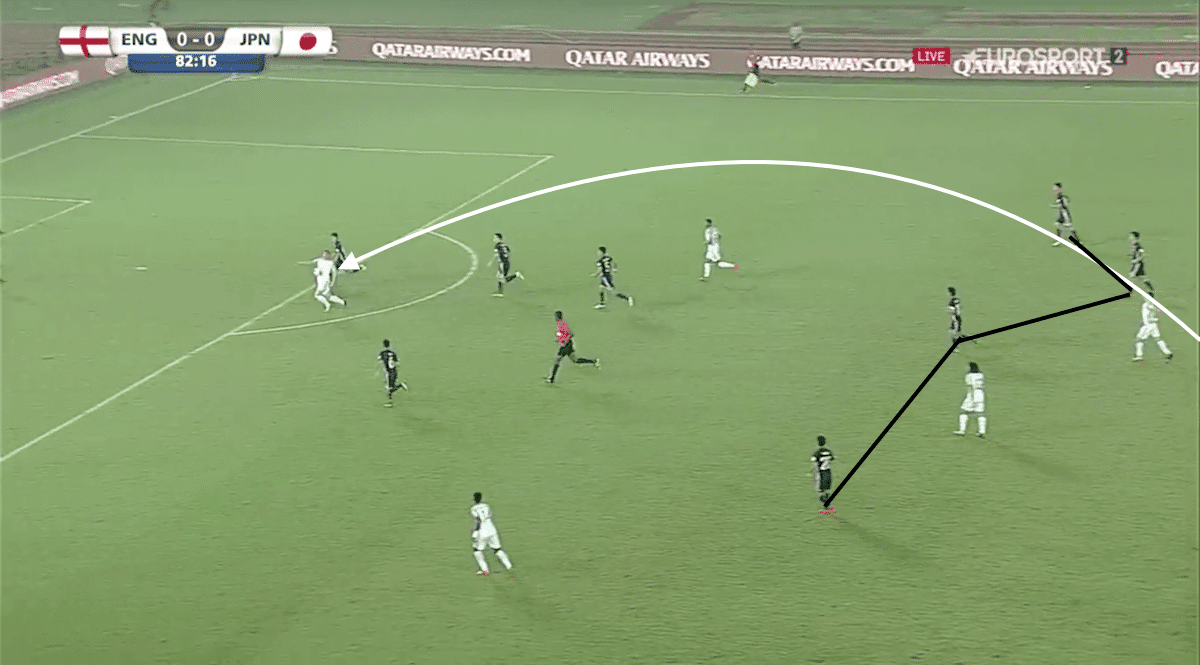 Instead he plays a ball into the path of the England player who has cut inside from a right position and ran across the face of the Japanese backline. It's a pass which takes seven players out of the game and gets England one-vs-one driving into the penalty area.

Unfortunately, however, the shot is fired wide and the good opening isn't capitalised on.

What are Gibbs-White’s main weaknesses?

Despite his positional intelligence he is lacking in experience and this is sometimes prevalent in his decision making. Instead of playing a simple pass which would help his team progress he opts to try to do it himself. 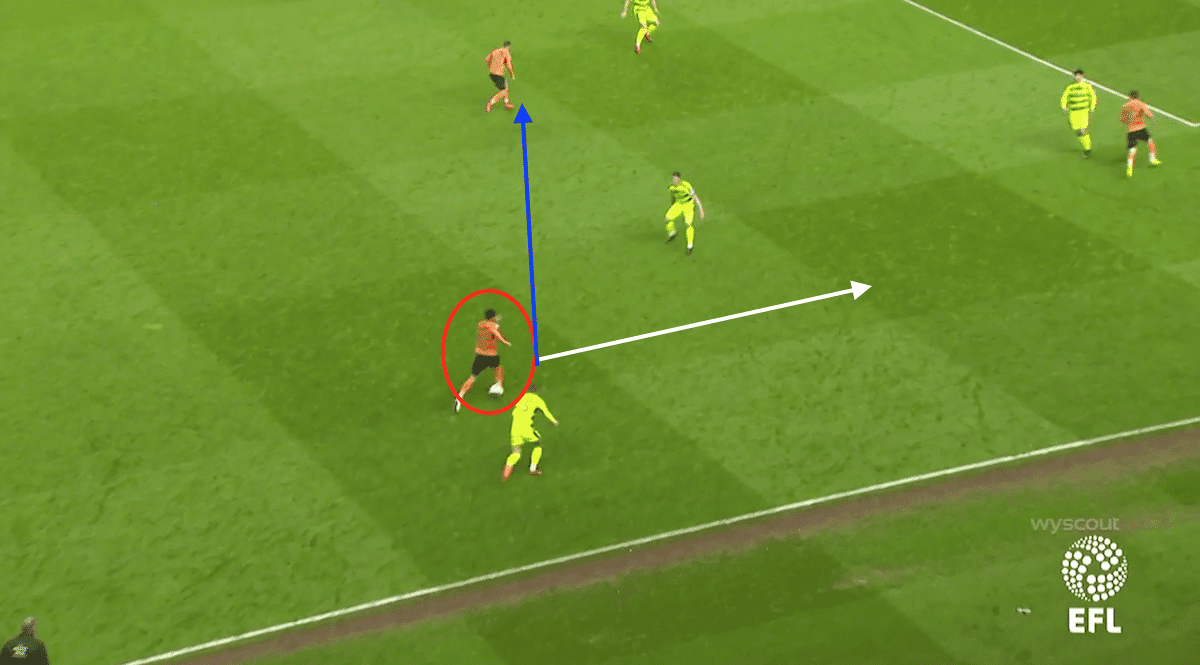 In the picture he's just beaten the man now trailing him. He could play a pass inside, shown by the blue arrow, and it would see his teammates have a two-on-two situation just outside the penalty area. They could work something and maybe carve out an opening.

However, Gibbs-White doesn't play the pass. Instead he takes the route of the white arrow and drives into what he views as space just waiting to be attacked. 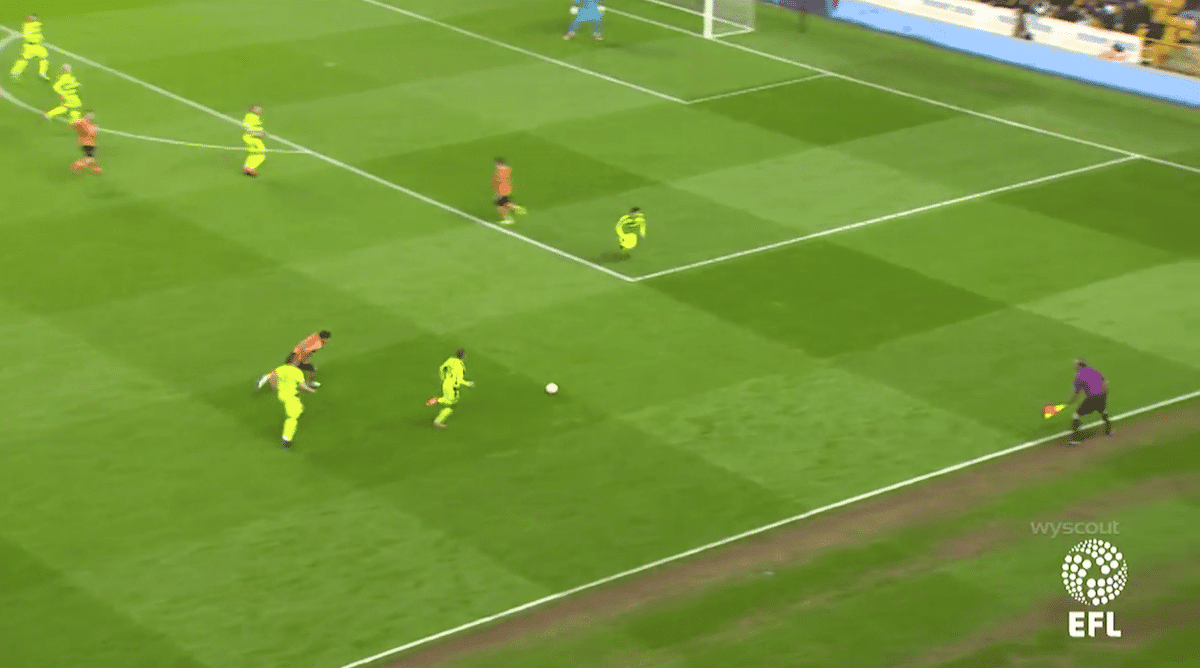 He's easily crowded out and what could have been a good opportunity for Wolves comes to nothing. It's a weakness now but with more time on the pitch it's something that will improve.

The Wolves academy graduate is spoilt for choice. The three clubs thought to be interested in him are all ones who give youth a chance.

Pochettino, throughout his career, has given opportunities to talented and promising players. The England team is now filled with players who have been coached by the Argentine manager and it's not something he's likely to stop doing anytime soon. If you have the talent then you'll get the chance.

Jürgen Klopp isn't afraid to put his trust in youngsters. Though he's not as liberal as his Tottenham counterpart when it comes to playing time, he will manage the development of the players. Trent Alexander-Arnold, Ben Woodburn and Joe Gomez have all benefited from the former Borussia Dortmund manager's approach.

Arsenal used to be the place for youngsters to get an opportunity but over the years that's stopped. Whether that's because the talent is no longer there or the pressure on manager Arsène Wenger has increased. Players seem to stall while plying their trade at the Emirates so a move there might not be the best for Gibbs-White's career.