England’s latest friendlies provided plenty of intrigue. Against both Holland and Italy, Gareth Southgate went with an unusual system and gave chances to the inexperienced, with two players – James Tarkowski and Lewis Cook – winning their first international caps.

Going undefeated across two tricky fixtures was noteworthy, though it was the performances – as opposed to the results – that offered the most reason for optimism ahead of this summer’s World Cup. And, in assessing these performances, it’s worth also reflecting on the influence of the Premier League’s recent coaching influx.

Antonio Conte, Pep Guardiola, Jürgen Klopp, José Mourinho and Manchester City, Liverpool, Manchester United and Tottenham Hotspur respectively. In the process, their players and ideas have been incorporated by the English national team.

Conte: Popularising The Back Three

Less than three years ago the back three was viewed with suspicion at the top of the English game. However, it’s now hard to imagine the Premier League without this defensive system. Indeed, 19 of the league’s 20 teams have experimented with a back three at least once this season – the only team to have utterly committed themselves to a back four are Sean Dyche’s Burnley. That’s a significant upturn on the 10 of 20 teams to have used a back three in 2015/16.

Conte deserves much of the credit for this change of heart. When he arrived at Chelsea in 2016, it was assumed that he would implement a three-man back line, as he did successfully with both Juventus and the Italy national team. And, after a brief flirtation with a back four, he implemented a 3-4-2-1 system. This shift was crucial to his side’s title win last season, and many other teams – including Arsenal – have since copied the formation.

For both of England’s latest friendlies, Southgate lined his side up in a 3-5-1-1 shape. Few in the media batted an eyelid at the decision, but before Conte’s appointment at Chelsea the reaction to such a system would have been much less open-minded.

When Conte came to the Premier League, there was uncertainty about his three-man defensive line and whether it would work in England. By contrast, Klopp arrived to excitement regarding the pressing and counter-pressing game he had brought to mainstream attention in Germany with Borussia Dortmund.

His Liverpool side have, to an extent, confounded expectations by gradually becoming less aggressive in their pressing approach. However, the midfield press they utilise is arguably the most cohesive and effective press in the country.

Southgate’s England press in a similar area of the pitch, albeit not in exactly the same way. While this tactical decision may not be directly attributable to Klopp, it’s impossible to deny the impact his defensive strategy has had on English football, where applying pressure has always been welcome, but not quite so well-orchestrated.

At the start of this season, Guardiola lined his Manchester City up in a rough 3-1-4-2. The system worked fairly well, particularly when building out through high opposition pressure, due to the angles presented by what was essentially a defensive diamond shape.

Southgate’s England took up a similar build-up structure against Holland and Italy. This can be seen below, where John Stones sits at the base, Eric Dier is at the tip, and Tarkowski and Kyle Walker operate as the outer centre-backs. 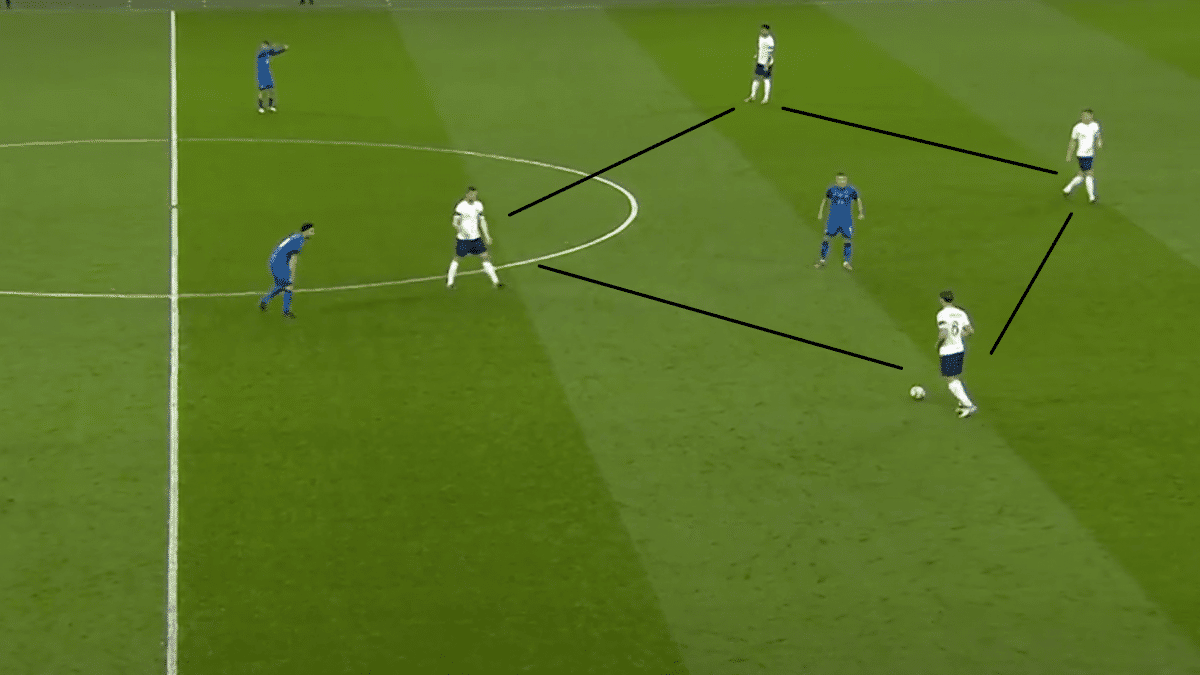 The Three Lions aren’t just copying a build-up structure, however. They’re also benefitting from Guardiola’s development of English talent. Stones’ movement when establishing possession is much more dynamic and intelligent than before, while Walker’s re-deployment as a forward-thinking outside centre-back is something we have seen at club level this term.

While we’re on Guardiola, it would be wrong not to also mention his rejuvenation of Raheem Sterling, who looked impressive as a second striker in England’s latest friendly games. The 23-year-old is dribbling and creating more often and more productively than ever before, and could be a key player in the upcoming World Cup campaign. Compare that to where he was two years ago, when he was scapegoated post-Euro 2016, and his club manager’s guidance is clear to see.

Mourinho really doesn’t care what you think about his style of football. Responding to Frank de Boer’s criticisms relating to his usage of Marcus Rashford, the Portuguese stated: “The most important thing for me is to win. If [Rashford] was coached by Frank he would lose.”

It remains questionable whether Mourinho has made the most out of the young striker’s obvious attacking qualities during their two years together. What is not in question, however, is that he has taught the 20-year-old the value of defensive positioning and flexibility.

These are core aspects in what make Mourinho teams functional, and other English players have been enhanced by this mentality. Ashley Young has been reborn as a canny full-back, while Jesse Lingard has grown into an astute attack-minded central midfielder. Thanks to their new roles at club level, both look likely to go to Russia this summer.

Moving away from tactical concepts and individual re-deployments, it’s vital to recognise the work Pochettino has done with home-grown talent. He has produced more England internationals than any other Premier League manager over the last six years, with 12 players making their national team debuts while under his auspices at club level.

Since the Argentine arrived at Tottenham, Harry Kane has gone from squad player to one of Europe’s finest finishers, Dele Alli has gone from League One prospect to top class playmaker, and Dier has gone from Sporting Lisbon reserve to England’s No.1 defensive midfielder.

Thanks to Pochettino’s belief in young players over the last half-decade England not only possess a solid core, but will have more options to choose from when Southgate selects his 23-man squad for the World Cup.