You can tell the story of the Premier League almost solely through players’ under or over performance against their underlying stats.

Sometimes too much is made of these numbers but they are usually a sign of what’s to come in the near-future.

So here we go, from the top to the bottom of England’s top-flight, touching on almost every major story along the way.

Eden Hazard has raced away as the Premier League's top scorer with seven goals. Two of his strikes were penalties but even in open-play he’s over-performing.

So far this term, if he was matching the chance quality of his shots (2.35 expected goals) then he’d likely have two or three fewer to his name and perhaps Maurizio Sarri's side wouldn't be undefeated.

What will be of concern to Chelsea fans is that if Hazard dips back to expected finishing levels, and the club's strikers, Olivier Giroud and Alvaro Morata, continue to struggle, then the Blues’ surprise title charge is likely to falter.

To make matters worse in this potential future, their two main rivals for the top flight crown – Liverpool and Manchester City – could have extra goals coming their way.

Hazard vs Salah - hot vs cold

Mohamed Salah and David Silva could both have contributed two extra goals with a bit more luck. Salah’s situation has been written about previously, and the stats show that Liverpool’s attackers are as dangerous as ever despite worries around them.

For Silva, however, this bonus would come in the form of assists. Despite setting up chances worth 2.05 expected goals, no player has finished an opportunity he’s fashioned in the league this season.

New dogs – or Wolves – on the block

It’s perhaps not a surprise Wolves are doing so well given the pre-season expectations – they currently sit seventh in the table, two points above Manchester United – but they could potentially be in an even better position.

First-choice striker Raúl Jiménez has scored fewer than half of the goals that his stats suggest he could have, netting just two from his 4.21 expected goals.

So if he continues to get the same amount of chances and hits a hot streak, or even just finishes chances at an average level, in front of goal, Nuno Espírito Santo’s team could make serious push for a Europa League spot.

Silva’s golden streak to come to an end?

There are only four players in the Premier League who have scored two or more goals than the expected stats suggest they should have done. And two of them play for Everton. 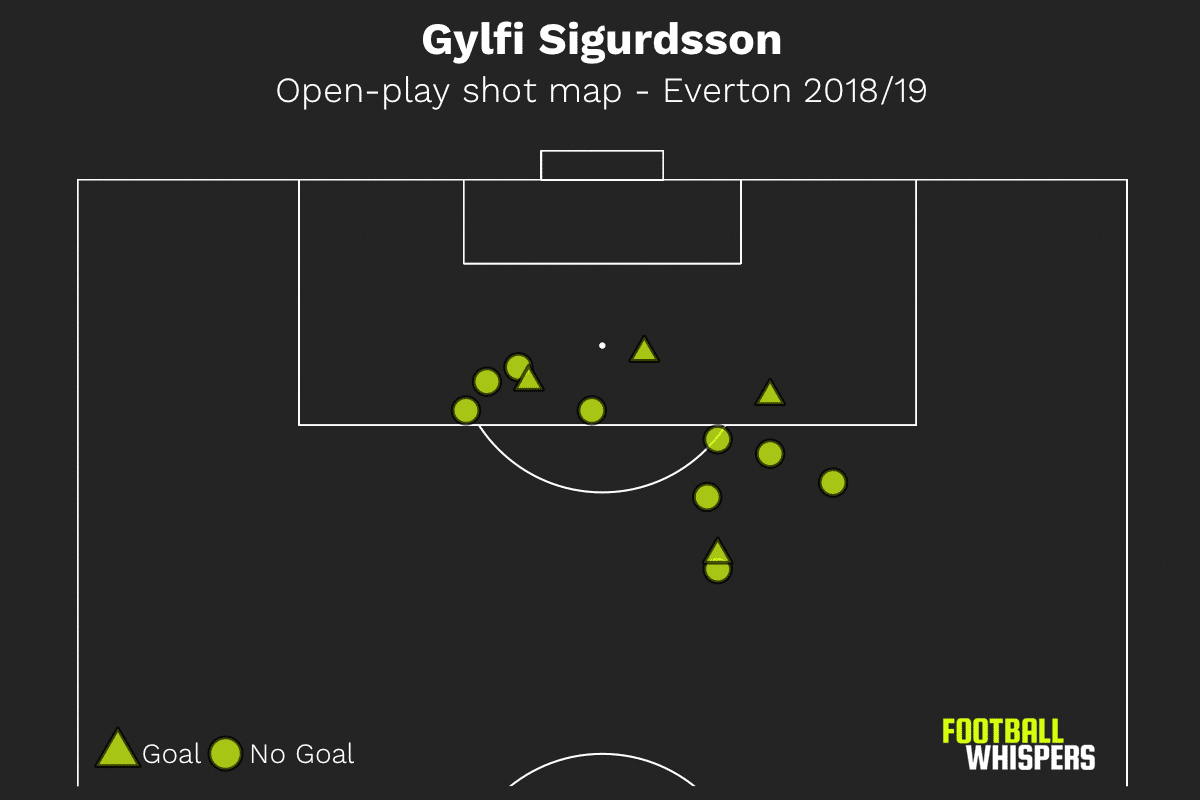 Meanwhile, Marco Silva’s favourite Brazilian, Richarlison, is also up there – his four strikes in the Premier League have come from just 1.76 expected goals.

Everton have been struggling to keep pace with the other teams chasing European football and their position looks like it’s been over-inflated by these two players. A season in mid-table may beckon unless they can start creating better quality opportunties.

Safety looms for some, but not others

Once again, the Premier League has a long tail of teams who look like they’ll be fighting the spectre of relegation a good part of the season.

From Burnley in 12th, the table is tightly packed. But one team who should be able to escape the mire quickly are Southampton, whose main man Danny Ings has had a poor run in front of goal. 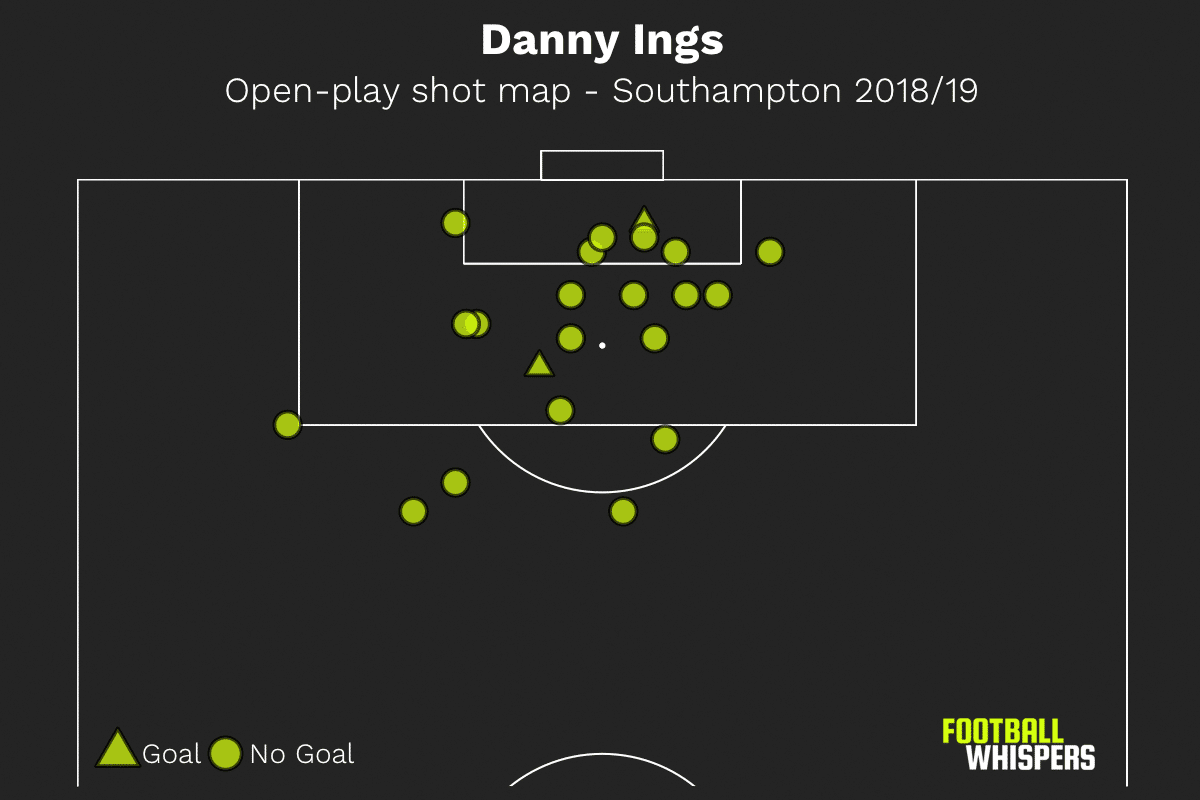 When you recall his miss against Chelsea it isn’t hugely surprising to learn that he’s the Premier League’s biggest expected goals under-performer, getting just two in open-play from chances worth 4.57 xG.

Sometimes strikers go through runs where they struggle to find the net, but for some the struggle lasts longer than others. Christian Benteke's tough run is approaching 18 months in length.

He was the biggest under-performer in the league last season (scoring just two open-play goals despite chances worth over ten expected goals) and is vying for the unwanted title again this time around.

Crystal Palace’s goal burden has mostly fallen to Wilfried Zaha in Benteke’s end-product absence, but if the Belgian can start to make up some of the difference between his 2.3 expected goals and zero actual goals, it would be a big help.

So Southampton and Crystal Palace should be fine, but Fulham might not be.

They’ve been disappointing this season, especially considering the hype they received after winning promotion. One lone light has been the performance of on-loan Luciano Vietto, who’s already racked up four assists.

However, the chances he’s created so far have only been worth 1.71 expected goals. If they’ve looked bad with this rub of the green, they’ll look much worse without it.

The Cottagers will be hoping that their strikers keep finishing Vietto’s shot assists at the same rate as they are now, because if they don’t then the bottom three could be looming.

Both Huddersfield and Newcastle have had tough schedules to open the season which will ease up in the coming months. Cardiff, meanwhile, might not have a single player who’s squandering chances but as a team they’re an unlucky bunch.

It isn’t hard to nudge slightly above your expected goals total early in the campaign – some players haven’t had many shots but have scored from one or two of them.

However, Cardiff only have two players with even a slight over-performance, and ten who have under-performed so far.

Huddersfield face a similar situation, with four over-performers and twelve under-performers, including their two strikers Laurent Depoitre and Steve Mounie.

At some point, the goals will start to come. It's just a question of when.