Goals. We love them. Especially when they come around Christmas. The festive period is a special time to be a football fan. Well, specifically a Premier League fan.

As Europe's other top leagues settle down for their winter slumber the Premier League enter its most frantic period.

Of course, with that all about to change, it's important that we savour this season's packed holiday programme before England's top flight introduces the winter break from the 2019/20 season.

We've enjoyed a lot of thrilling, goal-filled games down the years and thought it would be a nice blast of nostalgia to trawl through the archives and pick out the Premier League's best festive games.

Their meeting at Old Trafford that season is remembered for Steve Bruce's headers and Fergie and Kidd dancing on the pitch as United captured the first of their many Premier League crowns, but the clash at Hillsborough was stirring stuff too (if you were a United fan, anyway).

David Hirst and Mark Bright raced Wednesday into an early two-goal lead before John Sheridan seemed to have made sure of three points with the third.

But United didn't know when to give in back then and roared back, with Brian McClair grabbing two before Eric Cantona equalised with a scrappy effort at the far post with six minutes remaining.

Running away with the league, Fergie's Red Devils looked to have sealed an emphatic win at Anfield after strikes from Bruce, Ryan Giggs and Denis Irwin.

But Roy Evans' Reds fought back brilliantly. Nigel Clough bagged a brace to knock United onto the ropes before Neil Ruddock popped up with a bullet header ten minutes from time, completing an unlikely comeback and delivering a sobering reality check to United.

Another yuletide classic featuring United and another game in which they seemed to have things under control.

Teddy Sheringham and Ole Gunnar Solskjær turned the game at Highfield Road on its head after Noel Whelan's early opener to put United in the ascendancy heading into the break.

But the Sky Blues stunned the champions, Dion Dublin and Darren Huckerby both scoring late in the day to knock United for six. As United eventually lost their league crown to Arsenal by the odd point, this mini-capitulation still stings.

Liverpool and Newcastle played two of the most ludicrously entertaining Premier League games in history with the Reds' successive 4-3 wins at Anfield in 1996 and 1997.

This encounter was a less seismic but still thoroughly entertaining concluding chapter to a blockbuster trilogy as Liverpool recovered from two goals down to leave the Magpies reeling once more.

Nolberto Solano opened the scoring and, despite Dietmar Hamann's dismissal a minute later, the Geordies looked to be heading for revenge Andreas Andersson doubled their advantage.

But Liverpool scored four times in a hectic 17-minute period – Michael Owen and Karlheinz Riedle getting two apiece – to sink the Toon and clinch yet another dramatic win. 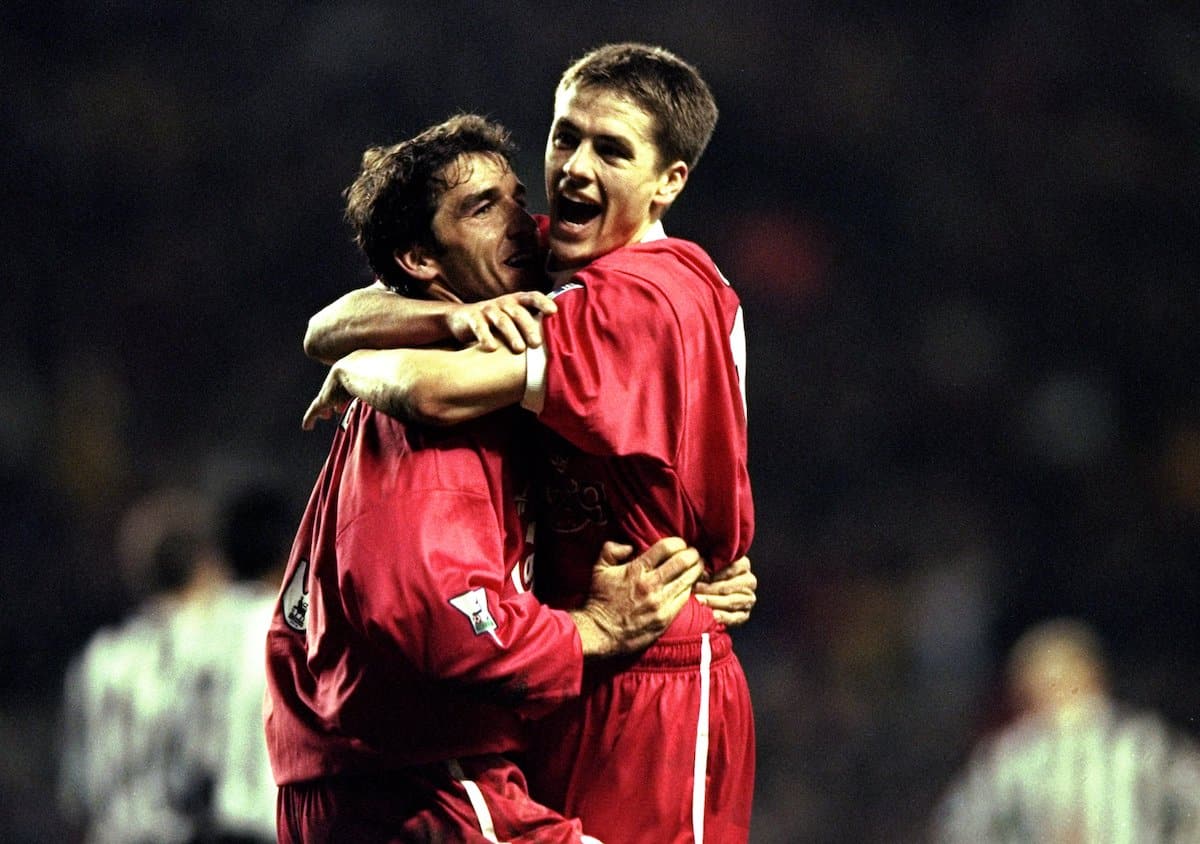 Oh, how times have changed. In December 2001, this was a top-two clash. It certainly lived up to its billing, too, as the two sides produced a seven-goal thriller for the ages.

Craig Bellamy's opener was emphatically cancelled out by the hosts, who raced into a 3-1 lead through Lee Bowyer, Mark Viduka and Ian Harte.

But it was Solano who delivered the stunning finale, coolly slotting home in stoppage time to seal a brilliant comeback and secure Sir Bobby Robson's side's place at the summit.

Their team was packed with Pointless answers from the mid-noughties, too. We're talking Antoine Sibierski, Sun Jihai and David Sommeil.

They provided plenty of entertainment, too, like at the DW Stadium – then the JJB – in this Boxing Day cracker.

Sibierski headed City ahead after just three minutes before Jason Roberts levelled. Then Wigan took charge as Lee McCulloch, Roberts and Henri Camara all netted to established a 4-1 lead.

City weren't done though. Joey Barton's stunning volley and a close-range finish from Andy Cole set up a rousing finale, by the end of which Wigan manager Paul Jewell seemed to have aged about ten years.

Eight goals, three red cards and endless drama made this a Boxing Day game to remember at Stamford Bridge.

Zat Knight, Ricardo Carvalho and Ashley Cole all saw red on a frankly bonkers afternoon in west London. Shaun Maloney fired Villa ahead before Petr Čech's clanger gifted the Scot a second. Knight's red card allowed Andriy Shevchenko to convert from the spot before the Ukranian scored a spectacular equaliser from distance.

Alex spanked home a third before Martin Laursen's leveller. Carvalho was then given his marching orders and Michael Ballack looked to have clinched it with a free-kick. But Cole's handball on the line led to Gareth Barry salvaging a point for Martin O'Neill's side in dramatic fashion.

Incidentally, the two sides played out another Christmas cracker in January 2011 when Ciaran Clark scored an injury-time goal to earn another thrilling point for the Villains.

For the neutral, ten goals made for wonderful entertainment but Royals boss Steve Coppell didn't enjoy it all that much, especially having watched his side concede seven at Portsmouth just three months earlier.

With Berbatov and Robbie Keane in devastating form, though, there wasn't much hapless Reading keeper Marcus Hahnemann could do about the onslaught.

A Christmas cracker at Carrow Road. Edin Džeko was the hero, the Bosnian scoring twice to clinch a pulsating win for Roberto Mancini's champions after a real blood-and-thunder clash in the Norfolk rain.

City's totemic Bosnian struck twice in the opening four minutes to put the visitors in the driving seat. Anthony Pilkington pulled one back with a fine free-kick before Samir Nasri received his marching orders after squaring up to Sebastian Bassong for a fight he most certainly would have lost miserably.

City weren't miserable though when Sergio Agüero extended their advantage and, although Russell struck twice for the hosts, they came either side of a Mark Bunn own goal, allowing the Citizens to head back to the North West with all three points.

An enthralling and highly controversial game, United extended their lead at the top to seven points after Javier Hernandez's late winner.

Alan Pardew probably felt hard done by considering Newcastle had led on three occasions but even in Fergie's last season United tapped into that never-say-die spirit which characterised much of the Scot's reign.

Newcastle went 2-1 up when, after James Perch's opener, Jonny Evans scored at both ends. Patrice Evra levelled for United again only for Papiss Cissé to lash a brilliant left-footed drive into the roof of David de Gea's net.

United rallied late on though to leave Pardew seething at the side of a rain-sodden Old Trafford pitch. Robin van Persie made it 3-3 before Chicarito decided matters with a trademark poacher's finish.

The speed merchant scored a hat-trick and set up two more as the Gunners had their way with Pardew's hilariously misshapen visitors.

Walcott fired Arsenal ahead before Demba Ba equalised with a deflected free-kick. Alex Oxlade-Chamberlain and Lukas Podolski struck either side of Sylvain Marveaux's tap-in before Ba grabbed his second equaliser.

But Walcott scored two more and, with Olivier Giroud also getting in on the act with a double, Arsène Wenger inflicted a devastating blow on Pardew, one coach who has never been on the Frenchman's Christmas card list.

One of the most enthralling Premier League games over the last few seasons, a Harry Kane-led Spurs stunned José Mourinho's title-chasing Blues under the floodlights at White Hart Lane on New Year's Day.

More than anything, it was an incontrovertible demonstration of Kane's immense potential. The then 21-year-old's first goal, in which he skipped past three challenges before rifling an excellent drive beyond Thibaut Courtois perfectly encapsulated the ruthlessness and precision that has propelled him to elite status.

Featuring one of the finest half-volleys ever scored, this seven-goal thriller at Goodison Park will always be remembered for Xherdan Shaqiri's stroke of genius.

The Swiss midfielder's looping effort on the run which completely caught Tim Howard off-guard was a goal of such exquisite technique, timing and audacity. Racing onto Bojan's defence-splitting through ball, Shaqiri struck the ball at the exact perfect moment after its second bounce to generate speed and height and lift the ball tantalisingly over Howard's head.

Shaqiri's first that afternoon wasn't bad either, finishing expertly after some neat interplay between Bojan and Marko Arnautović. The Austrian proved the matchwinner with his stoppage-time penalty but it was Shaqiri who brought the Goodison Park crowd to their feet in unanimous admiration.

On a cold January evening, we got to see the good, the bad and the ugly of Eddie Howe's Bournemouth.

The Cherries charged into a 3-0 lead after playing some lovely stuff before hitting the self-destruct button. Having completely unnerved the Gunners, Bournemouth allowed their visitors back into it as Alexis Sánchez launched the comeback with a fine diving header.

Eventually, the hosts wilted as Giroud rose above Steve Cook to head home and make it 3-3. Relief for Wenger, despair for Howe.

The most recent entry, Arsenal and Liverpool delivered a feast of attacking football on a captivating night inside the Emirates.

Philippe Coutinho, in his penultimate game for Liverpool before joining Barcelona, opened the scoring before all hell broke loose.

Mohamed Salah exposed Arsenal's defence with a fantastic breakaway finish to make it 2-0. Six minutes later, Liverpool were somehow behind after a three-goal blitz from Sánchez, Granit Xhaka and Mesut Özil completed an extraordinarily quick turnaround.

But Arsenal couldn't hang on as Roberto Firmino levelled and ensured a share of the spoils at the end of a chaotic, breathless encounter.