It’s very rare one player manages to appeal to the majority of the top six clubs in the Premier League.

With different systems and styles, it’s near impossible to find that skeleton key; that one individual who looks just at home in Liverpool’s dominant possession-based style as they would in Manchester United’s counter-attacking system.

Yet Benjamin Bourigeaud manages to do just that. The 25-year-old is reportedly interesting Liverpool and United as well we being on the wishlist of Tottenham Hotspur, Chelsea and Arsenal.

Everton are also believed to keen on the versatile Rennes man while a host of foreign clubs are scrambling for his signature, according to Spanish daily sports paper Estadio Deportivo.

The Frenchman finished the 2018/19 campaign with 19 goal involvements, ten of which were assists. Rennes are believed to want around €20million to part with the midfielder they signed two years ago, a relative bargain in the current market.

The name Bourigeaud sounds like a rejected character from The Great Gatsby but he has everything required to be a leading man, and this summer could be his chance to make that step up to the next level.

A utility man with an end product. It isn’t the most glamorous of descriptions but it’s exactly what Bourigeaud is. Think James Milner and Nolberto Solano. Last season, the former Lens man appeared in eight different positions for Rennes, and he did a job in all of them.

So much so, it’s difficult to pinpoint exactly what his best role is. He’s able to showcase his vision from central midfield and he gets about the pitch to carry out his defensive duties.

In a wide role, he’s able to put his crossing ability to good use. What’s even more impressive, perhaps, is though primarily right-footed, he can use both feet and even looked the part as a left midfielder. 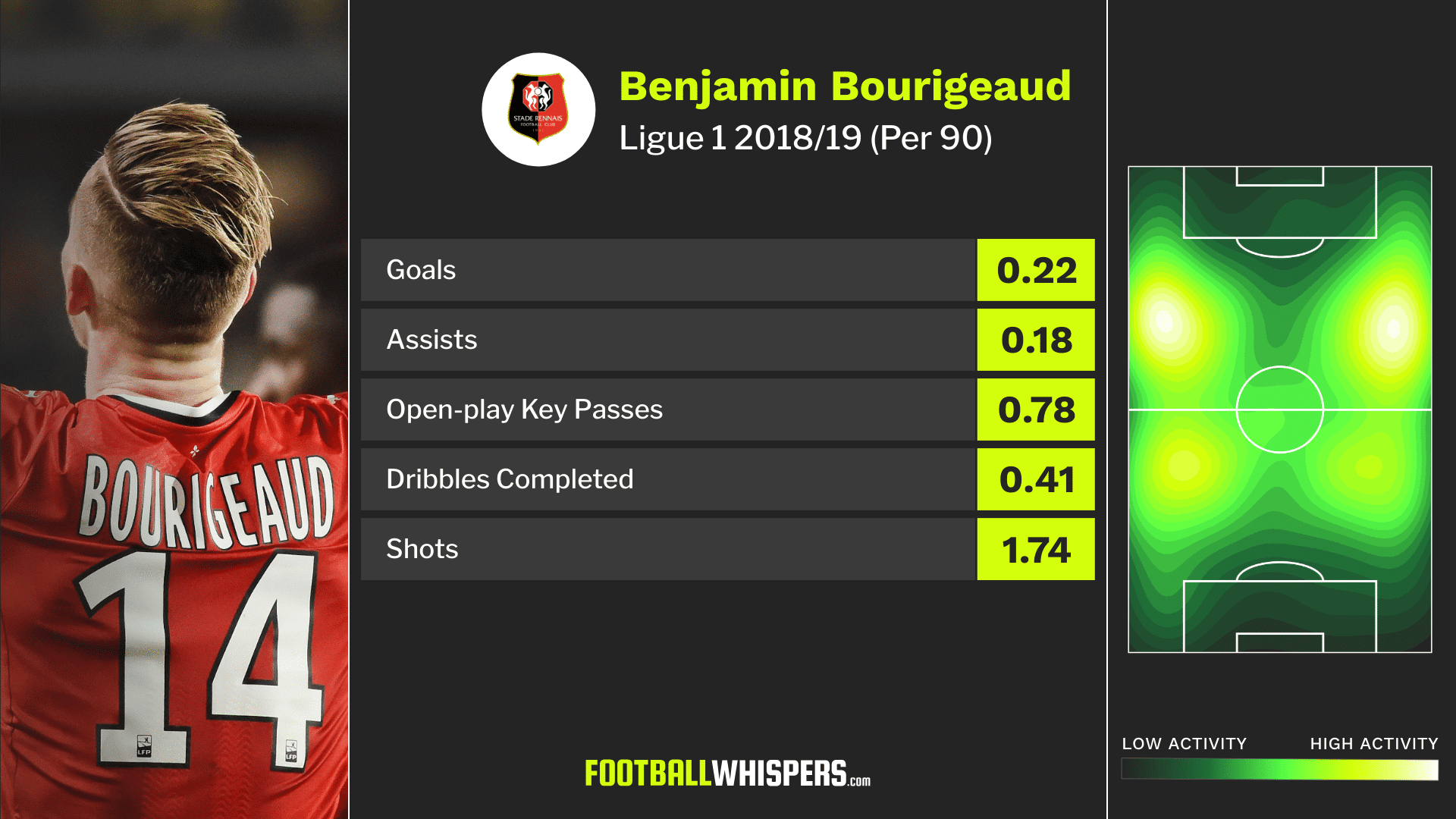 His versatility, as evidenced by his heat map, makes it difficult to read into his stats too much. He appeared in 2,435 minutes in Ligue 1 for Rennes and a further 648 in the Europa League. It's a large sample size and usually enough to make reasoned assumptions.

In isolation, his 0.41 completed dribbles per 90 in the French top flight gives off the impression he isn't press-resistant and wouldn't do well as a centre midfielder in a Premier League team. But that isn't necessarily the case. When deployed wide for Rennes, he isn't tasked with beating men. He's there to put crosses into the box.

He can take players on and he does have a burst of pace from a standing start which allows him to drive past opponents.

It's hard to be exceptional at anything when you're role changes on an almost weekly basis, but Bourigeaud has managed to craft a role for himself as a set-piece specialist.

In open play, he's not much of a goal threat. The 25-year-old averaged just 1.36 touches in the 18-yard box last season, highlighting the fact he isn't a player to get beyond the play.

More often than not, there's no room for players like that in teams, at least not if they're deployed as part of the attacking trio. 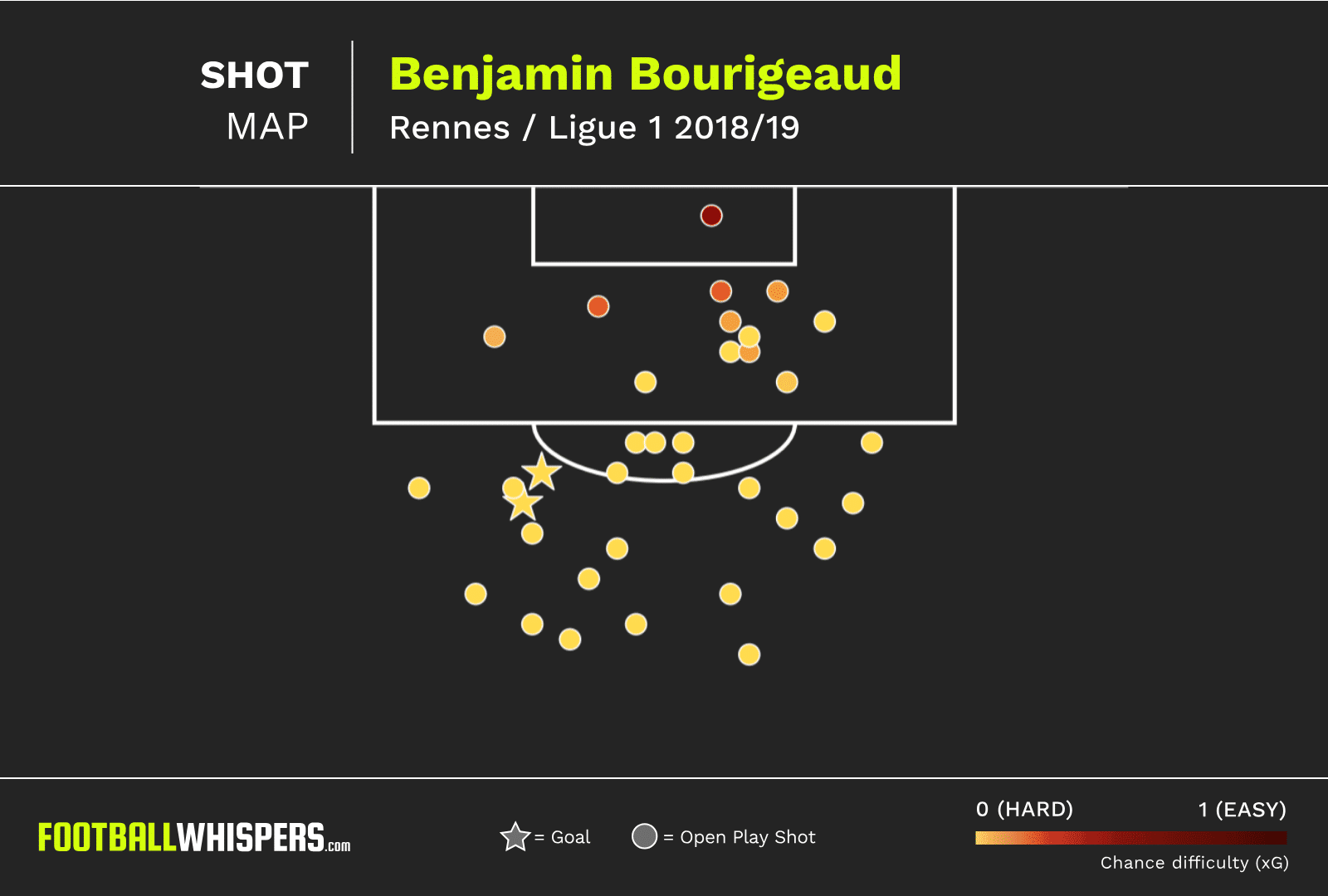 His shot map supports that. In open play, he takes very few efforts and they all tend to be from outside the penalty area. He's not a reliable goal threat and he's the sort of player to waste good situations by opting to shoot when others are better placed.

However, Bourigeaud is something of a set-piece fiend. A third of his goals in Ligue 1 came directly from free-kicks while the other two he managed outside the area came from the second phase of a set-piece.

Furthermore, 0.11 of his 0.18 assists per 90 came from set pieces. He's the sort of player you want in your team purely for his unpredictability, which a bizarre way, that's the one constant to his game. Managers can rely on him to produce something magical from distance.

But this is where it gets tricky. Teams need a player like Bourigeaud. The issue, however, is forwards for the top clubs need to be a reliable goal threat while midfielders need to be frugal in possession. He's neither of those.

Interested clubs may view Bourigeaud differently, though. An intriguing possibility is to deploy him as a full-back. It makes the most of his crossing ability, he can fully express himself in possession with his long, raking passes being a tool they look to use on a regular basis.

It limits the attacking positions he gets into meaning he's not tempted to lash the ball goalwards yet it still gets him onto the pitch so he can be a set piece threat.

It's a wildcard shout but Liverpool, Tottenham, Arsenal and Manchester United are looking for cover at full-back this summer. Bourigeaud could fill that role but then his versatility allows him to cover other positions when required.

For around the €20million mark, he'd be a good addition to most squads. However, his game will need some refining if he's ever going to become a key player in the Premier League.