Forget the Premier League title race. That's over. Even the top four battle may struggle to hold attention until May. Yet the end of the 2017/18 campaign may prove engrossing for one reason alone: the relegation battle.

With eleven matches to play the entire bottom half of the English top flight are in danger – Bournemouth in tenth are just five points ahead of south coast rivals Southampton in 18th.

Above the Baggies, however, it's simply too close to call. And we're approaching the point of the season where managers across the country use the “40-point mark” as the yardstick for survival.

It's a figure that has taken on an almost mythical status. Reach that and survive is the well held belief among managers, players and fans alike. But are they correct?

We've looked back, run the numbers and discovered that 40 points is not the threshold required for staying up in the English top flight.

Far fewer points, on average, are needed and that will be comforting to many sides battling to ensure they're in the Premier League come August.

So what should sides be targeting? The calculations are far from simple as clubs have been relegated on goal difference, meaning teams went down and survived with the same number of points.

In those instances we've taken the tally achieved by the side in 17th as being enough to remain in the top flight.

We've also only used data from the past 22 Premier League seasons as it wasn't until the 1995/96 campaign that the English top flight was played over 38 games. Prior to that 22 sides made up the division and 42 matches were played.

So, the answer. According to the numbers the average points a club needs to survive in the Premier League is 36.5. But, for the maths pedants, let's round that figure up to 37.

That's less than a point per game, 0.97 to be exact, and explains why many sides in imminent danger want, first and foremost, a manger who can set up a side that is difficult to break down.

It's playing the percentages. Keep the score level and then try to nick a goal. Do that across the entire season and the numbers indicate a team will rarely, if ever, go down. It's what Tony Pulis and Sam Allardyce have made careers of, after all.

Only in seven of those 22 seasons have a side needed to accumulate more than a point per game to survive. And only three sides have ever gone down with 40 points or more.

The biggest tally that wasn't enough to keep a club in the Premier League was achieved by West Ham United. The Hammers racked up 42 points during the 2002/03 season, an average of 1.10 per game, but it wasn't enough to save them as Bolton Wanderers came 17th with 44 points.

Identifying the trio that go down this season isn't easy, however. Only the bottom three are averaging less than a point per game. Southampton (0.96) and Stoke City (0.92) aren't far off, though, and one victory makes a big difference. 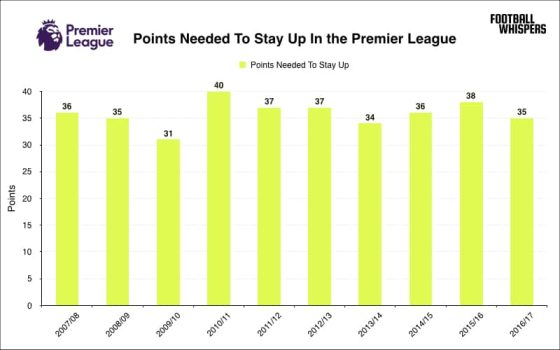 West Brom (0.74) require the biggest turnaround and may need a third manager of the season to do it – according to reports, Pardew has two games to save his job at the Hawthorns.

But if the Baggies were to lose their next two games, against 17th place Huddersfield Town and 11th place Watford, they would need to collect an average of 1.8 points per game, top five form, to have any hope of reaching the minimum 37 point mark.

Although the numbers suggest that may not be enough this season.

Southampton in 17th have 26 points from their 27 games and, looking back at the data since the 2000/01 season, only three sides have matched or bettered that total at this stage of a campaign.

Picking the trio that will go down is almost impossible. What is certain, however, is this season's relegation battle will be one of the fiercest in recent memory.