The final day may not have produced an exhilarating climax but there was no shortage of drama throughout a campaign that ended with the now familiar sight of Manchester City hoisting the trophy aloft.

However, before we consign the 2018/19 campaign to history, we deemed it prudent to look back on some of the key categories which tend to populate these end-of-season reviews.

It seems ridiculous now but eyebrows were raised when Liverpool paid Southampton £75million for Van Dijk in January 2018.

But outrage at the Dutchman's price-tag could not have been more resoundingly answered.

Van Dijk's impact over the last 16 months has been immense, his consistency and authority at the heart of Jürgen Klopp's defence critical in reaching two Champions League finals and finishing the Premier League season on 97 points with only 22 goals conceded.

The 27-year-old will, of course, be central to Liverpool's attempts to depose City next season but the newly crowned PFA Player of the Year can still cap a hugely impressive campaign by guiding the Reds to a sixth European Cup in Madrid on June 1. 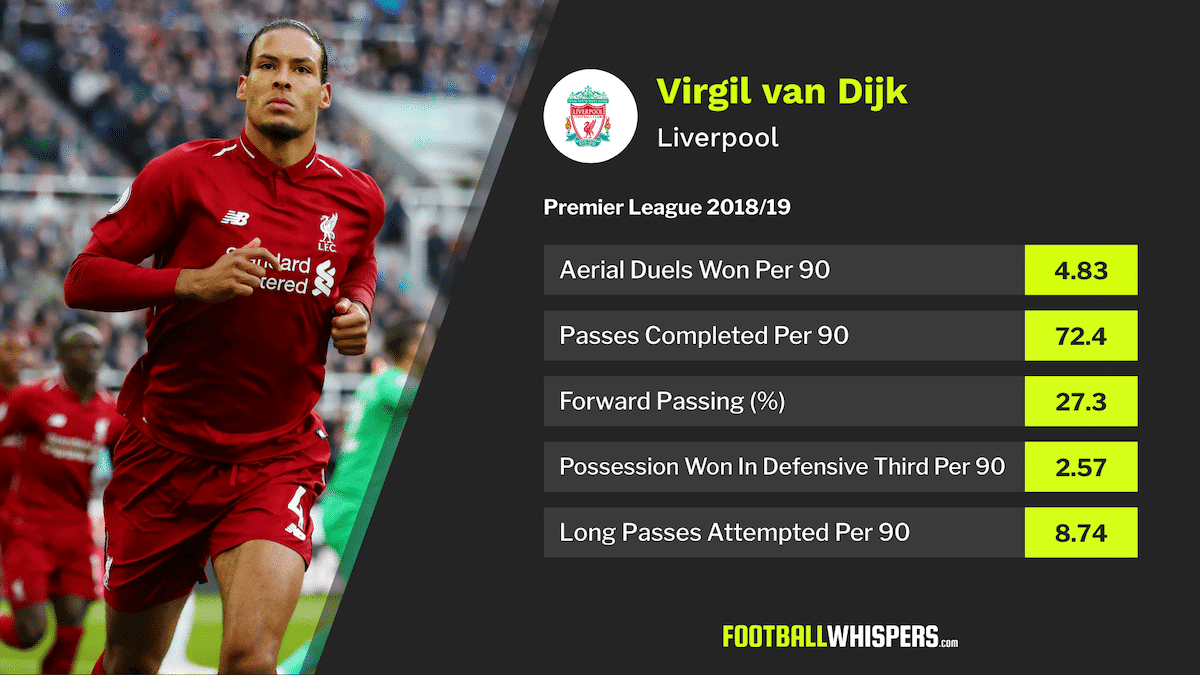 Klopp and Pep Guardiola obviously deserve a mention, while Mauricio Pochettino has worked wonders to secure a top-four finish with a threadbare squad at Tottenham, but few could have predicted the impact Santo's Wolves would have.

The Black Country side deservedly finished seventh ie ‘the best of the rest'.

Of course, they did so having regularly looked better than ‘the best'. They picked up 16 points in matches against the top six, including wins over Tottenham Hotspur, Chelsea, Manchester United and Arsenal (as a bonus, they also knocked Liverpool and United out of the FA Cup).

Santo has built a genuinely exciting team at Molineux, from Conor ‘I played every minute in all competitions' Coady to the ingenuity of Rúben Neves and João Moutinho in midfield and the burgeoning partnership of Raúl Jimenez and Diogo Jota up front.

With another summer of smart investment, Santo has a real shot at cracking the top six next season.

Signing of the season: Alisson

Like Van Dijk, he's the obvious choice but, crucially, he's also the correct one.

Stability between the sticks had long been an issue for Liverpool and the need for an upgrade was highlighted in excruciating fashion by Loris Karius' blundersome display in the Champions League final.

Alisson cost £67million. Like Van Dijk, his was a hefty transfer fee but the Brazilian has already justified such an outlay. He ended the season with the Golden Glove having kept 21 clean sheets. Commanding, athletic and consistent; Klopp has found a keeper with all the tools to become an Anfield legend.

Flop of the season: Fred

Always a fiercely-contested category, we've seen quite a few disappointing signings over the last nine months.

Riyad Mahrez is essentially a £60million squad player at City, Jean Michaël Seri and André-Frank Zambo Anguissa failed to impress at Fulham and Denis Suárez to Arsenal has to go down as one of the least impactful loan deals in Premier League history.

However, given their £50million investment, Manchester United fans were entitled to expect more from Fred. Having edged out City in the race to sign the Brazilian from Shakhtar Donetsk, a transitionary period was always likely but the 26-year-old's return of one goal and one assist in 17 appearances is hugely underwhelming.

He is likely to be retained for next season. He'll have to up his game considerably if he's to survive Ole Gunnar Solskjær's rebuild.

Goal of the season: Vincent Kompany vs Leicester City

The most aesthetically pleasing goal of the season was Andros Townsend's thunderbolt volley in Crystal Palace's defeat of Manchester City. It was the definition of pure.

But Kompany had no business thumping the ball into the same net from a similar distance at such a critical time in the title race.

Vincent Kompany has won Match of the Day's prestigious Goal of the Season competition for his long range screamer against Leicester City.

With Leicester City hanging on at the Etihad, City's Belgian skipper collected Aymeric Laporte's pass, took two touches and, as the stadium collectively thought ‘DON'T SHOOT', smashed the ball into the top corner.

It was a glorious strike – and a hugely important one.

Match of the season: Arsenal 4-2 Tottenham

Again, it's a fairly well-stocked category. Chelsea 3-2 Arsenal in August was thrilling, Liverpool 2-1 Manchester City was significant– not to mention Liverpool's only defeat – and Manchester City 2-3 Crystal Palace was surprising.

However, in terms of what entertained this writer this most, it has to be December's North London derby.

It remains arguably Arsenal's finest display under Unai Emery. Pierre-Emerick Aubameyang‘s early penalty put them ahead before Spurs roared back through Eric Dier and Harry Kane, the latter also from the spot.

But an irresistible second-half display lifted the Gunners to a remarkable win. Aubameyang scored again, Alexandre Lacazette added a third before man of the match Lucas Torreira capped a stunning victory.

It was as relentless as the Premier League gets.

Southampton had lost their way. Having established themselves as perhaps the finest developers of young talent in England, the reigns of Claude Puel, Mauricio Pellegrino and Mark Hughes left the club staring relegation squarely in the face.

Sacking Hughes and replacing him with Hasenhüttl at the start of December but it's paid dividends.

Not only has the 51-year-old secured their Premier League status, but he also has revived a sense of hope around St. Mary's.

Leicester deserve a mention, too, for bringing in Brendan Rodgers. The same cannot be said for Fulham, however, whose appointment of Claudio Ranieri did not go to plan.

The Switzerland international recovered from an injury-ravaged start to the season to become a crucial cog in the Newcastle United defence.

Salomón Rondón and Ayoze Pérez have milked much of the plaudits on Tyneside recently, but Schär was a big reason why the Magpies steered clear of the relegation zone.

Individual performance of the season: Bernardo Silva vs Liverpool

He ran and ran. And then ran some more. He also assisted Sergio Agüero's opener during City's hugely significant 2-1 win over Liverpool on January 3.

Silva, who earned a spot in the PFA Team of the Year after scoring seven goals and notching seven assists, was excellent throughout the season, but never was he more influential and indefatigable than during this absorbing top-two clash.

13.7 – Bernardo Silva covered 13.7 kilometres (8.5 miles) against Liverpool, the most by any player in a Premier League game this season. Endurance. pic.twitter.com/QTZewXE1mn

Manchester United, for instance, ended the season 32 points behind City, the same gap separating them from relegated Cardiff City.

Trent Alexander-Arnold registered 12 assists for Liverpool; the most by a defender in a single season. Also, Liverpool completed a second consecutive season without a home defeat. The last visiting side to take three points away from Anfield was Crystal Palace back in April 2017.

Wolves didn't commit a single foul during April's 0-0 draw with Brighton, something we thought was practically impossible until it happened.

Speaking of Wolves, we've gone with the fact that Rúben Neves scored more goals (4) than he had touches inside the opposition box (3).

Even for a relatively deep-lying midfielder, that's a remarkable stat.

Top-six team of the season 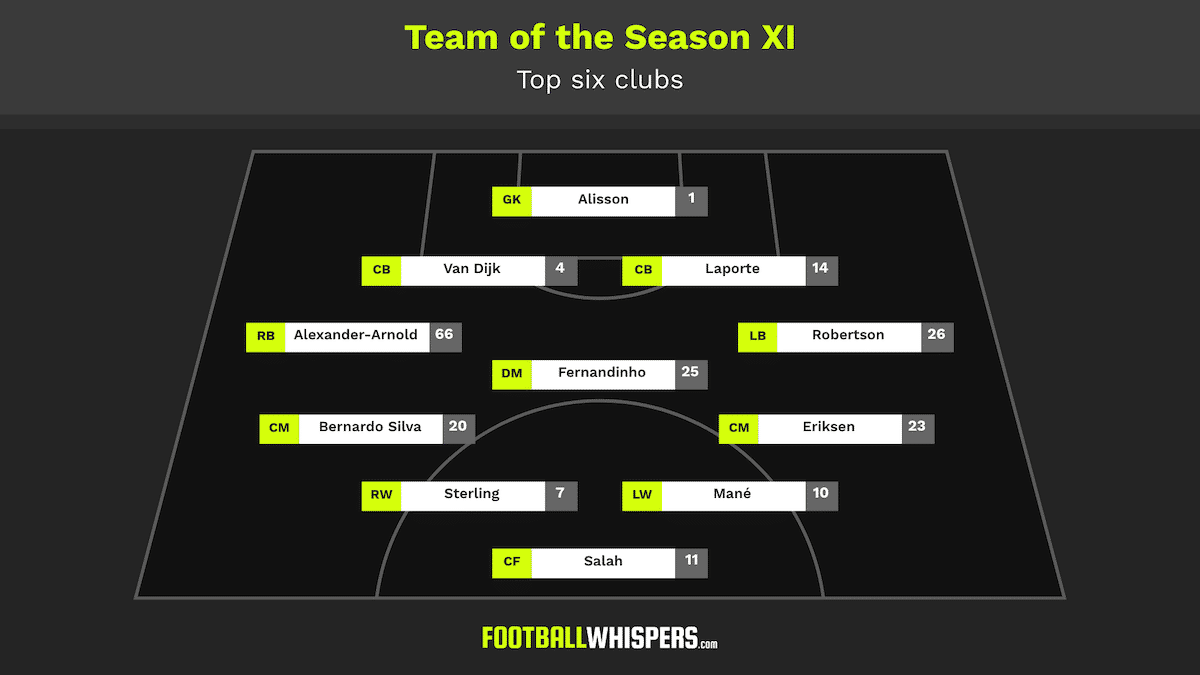 Non-top-six team of the season 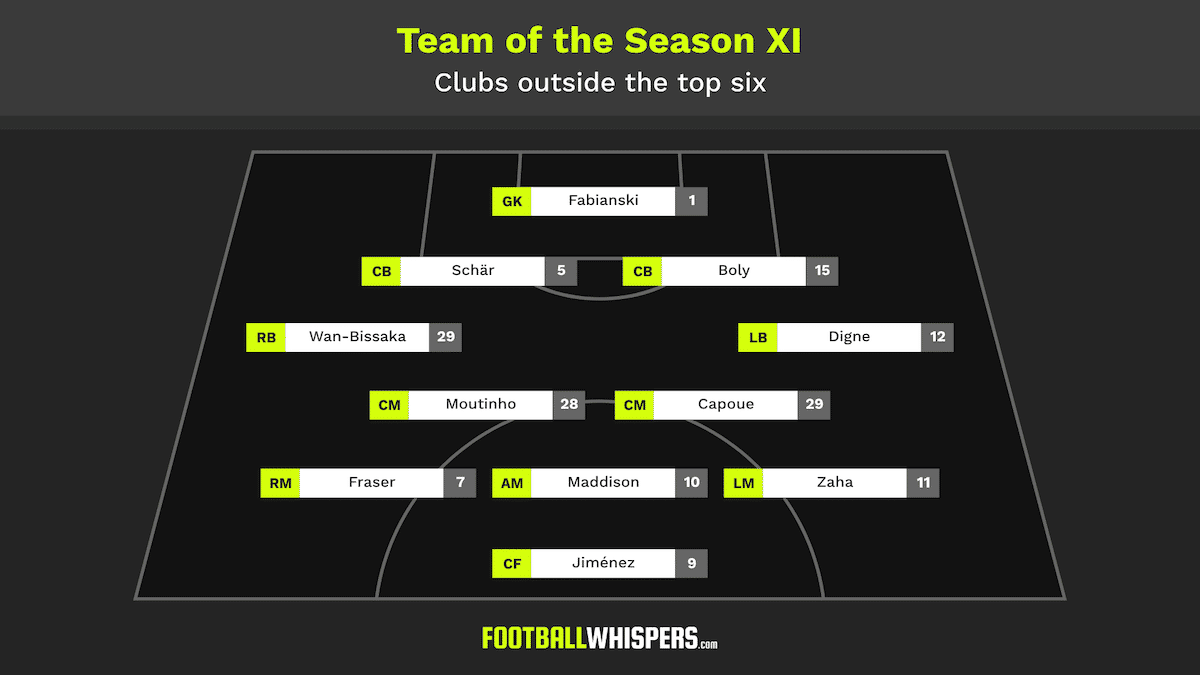 Right, that just about does it – see you in August!