With the futures of several Premier League managers up in the air, it slipped under the radar that Graham Potter this week extended his contract with Brighton & Hove Albion until 2025.

That might sound dangerously like Alan Pardew territory, but the 44-year-old had originally been contracted until 2023. That meant it was only a two-year addition on top of the deal he signed in the summer.

Speaking at the time of Potter's appointment, chairman Tony Bloom said: “We are delighted to have secured the services of one of the brightest young English coaches. Graham Potter has an excellent record of developing teams with an attractive playing style, fierce determination and a strong collective spirit.

“We are excited about our third successive season in the Premier League and we now wish to build on the solid foundations laid by Chris Hughton. We believe that Graham is an excellent fit for our club and we are very much looking forward to working with him.”

That was the challenge and, just 13 Premier League games into his Albion career, the club's hierarchy clearly believe the former Östersunds and Swansea City coach has already begun to deliver on that remit. It's hard to argue.

Sitting in the relative heights of 12th place, Brighton are five points clear of the relegation zone. But there's much more to it than that. Potter was expected to conjure up a new footballing philosophy and evolve the Seagulls away from the stoic, defence-first style Chris Hughton had preached to keep them in the top flight for three seasons. 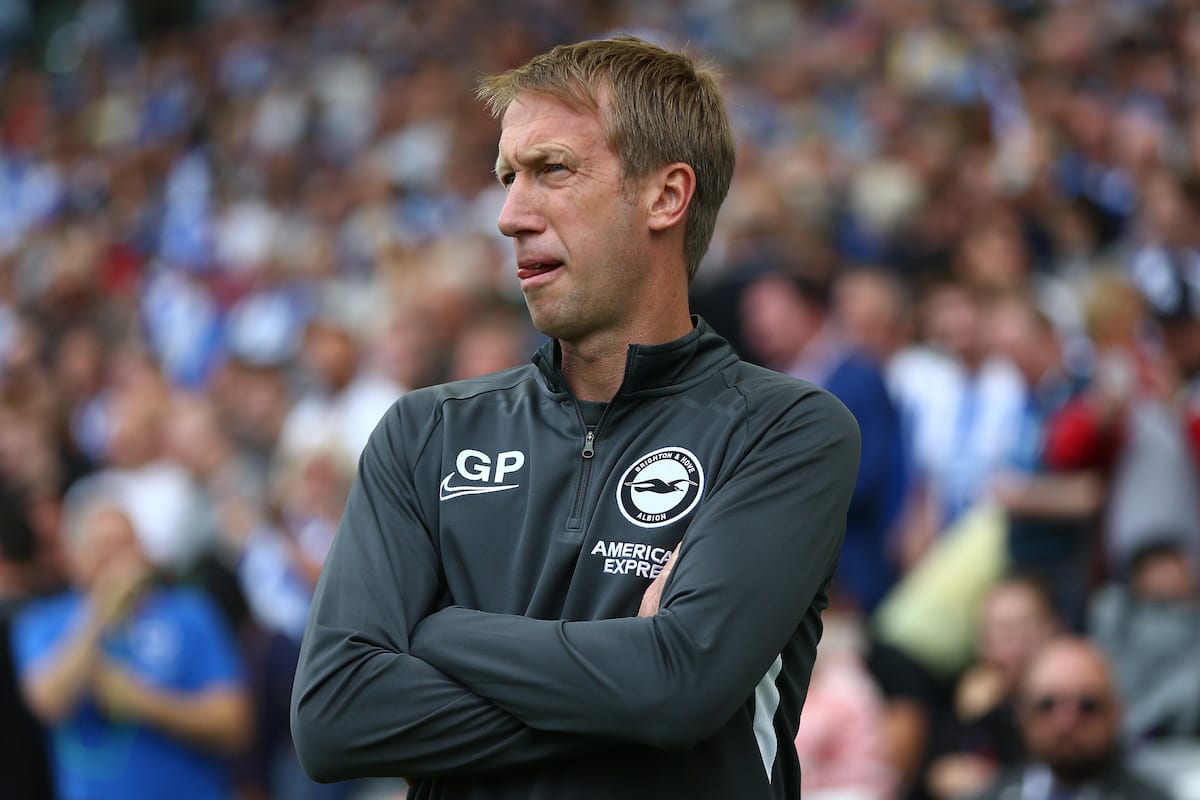 Hughton's achievements should not be overlooked. When Potter was appointed in late May, he made sure to doth his cap to his predecessor, acknowledging the foundations he had been to build from.

But it all seemed a far cry from the Hughton era when, on the opening weekend of the season, Brighton ran out 3-0 winners at FA Cup finalists Watford – a result which in no way flattered them.

However, they wouldn't win again in the Premier League until another showpiece 3-0 victory, this time at Tottenham Hotspur, on October 5. With three wins in their last five Premier League fixtures, the Seagulls have climbed away from the relegation mire and it cannot be a coincidence they have done so since reverting to a back four.

Albion's defence was the big success of Hughton's reign. The pairing of Lewis Dunk and Shane Duffy, protecting the excellent Australian stopper Mat Ryan, was the spine of their team. It was going forward where Brighton had more problems. Particularly with some of Hughton's attacking signings.

The former Newcastle United and West Bromwich Albion boss went big on Alireza Jahanbakhsh (£17million) and Jurgen Locadia (£15million), both of whom let him down spectacularly. Jose Izquierdo, at £13.5million, has gone off the boil since making a bright start.

On top of that, there was an over-reliance on the one attacking signing who did work out, Pascal Groß, and the ageing Glenn Murray. It's little wonder the Seagulls were not a popular watch among neutrals. 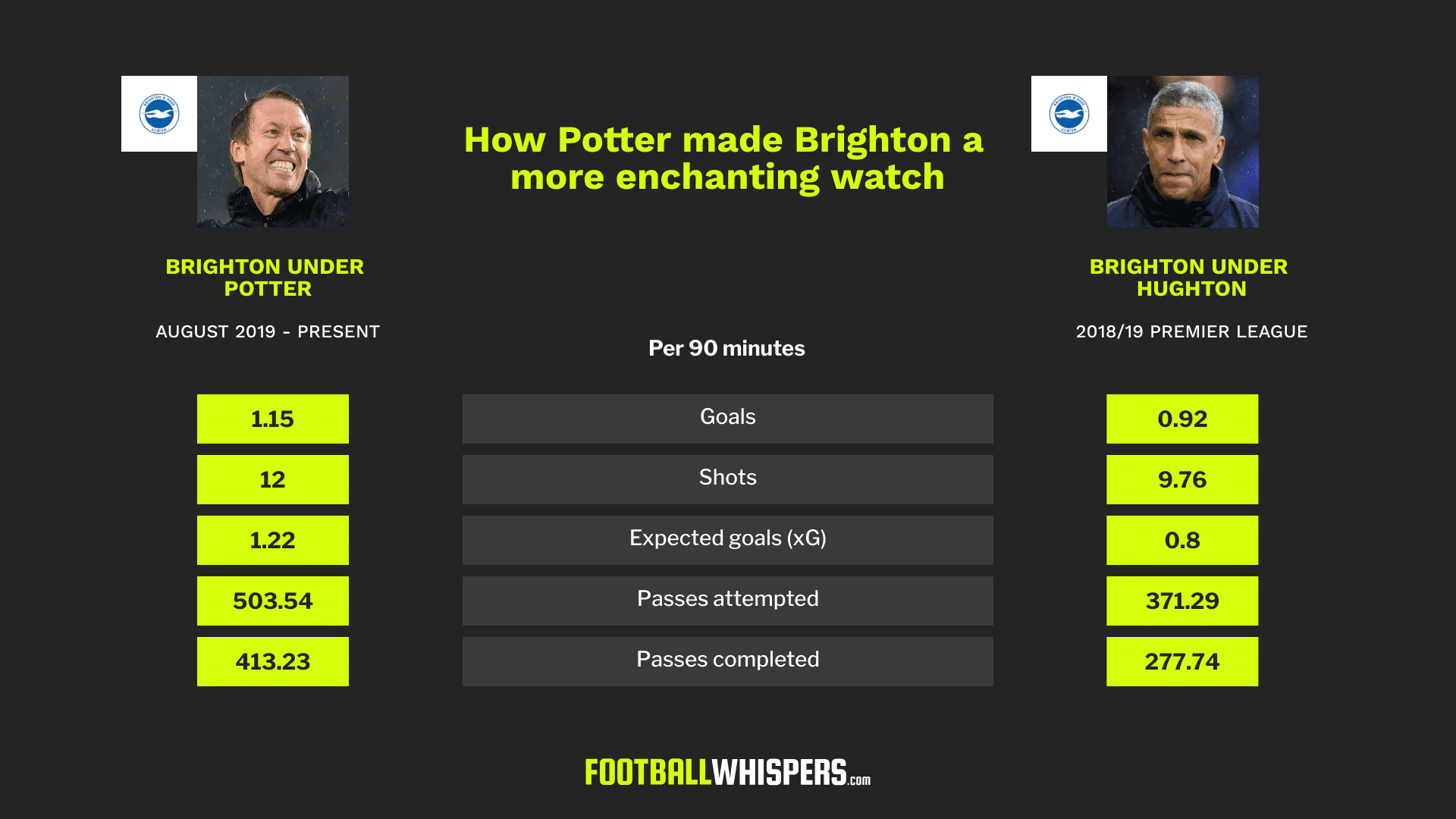 But all that has changed under Potter and it's easy to see the transformational effect he's had on Brighton in the numbers.

Perhaps the starkest contrast is in their build-up play, though. Hughton's side were direct and fairly one dimensional. It was successful, keeping them in the Premier League against all odds for three seasons while also reaching an FA Cup final. But supporters yearned for more and so did owner Tony Bloom.

In a relatively short space of time, Potter has overseen an exponential increase in the number of passes Albion attempt (503.54 vs. 371.29) and complete (413.23 vs. 277.74). What makes their completion figure all the more impressive is it puts them sixth in the Premier League.

On top of all that, Potter has shown he is not wedded to one idea. He has the tactical acumen and flexibility to change things up. After starting the season with a 3-4-3 shape, he has returned to a 4-4-2 in recent weeks with Groß and Aaron Mooy playing as very narrow widemen.

The Australian is one of just a handful of new faces to feature regularly this season with striker Neal Maupay another. The former Brentford hitman was one of the Championship's most sought-after strikers after finishing second only to Norwich City talisman Teemu Pukki in the race for the Golden Boot.

Maupay has taken to life in the top flight with apparent ease, scoring four times to lead the club's scoring charts. Maximising the output of new attackers is another area where Potter has already impressed with Belgian winger Leandro Trossard also showing signs of promise in his first few months at the Amex Stadium.

Change isn't without its challenges, though, and Albion are more open than last season. Their open-play expected goals against (xGA) stands at 1.6 versus 1.38 last erm. However, they are conceding fewer shots, down from 14.74 to 13.7. So there's something to work on – ensuring opponents have fewer high-quality chances

Now, for Potter's next trick…