Brighton & Hove Albion, despite a heavy 4-1 defeat against Manchester City on the final day of the Premier League season, had done enough. They were safe, two points clear of 18th-placed Cardiff.

Around the AMEX Stadium come full time against City, there was relief and satisfaction at the prospect of another year in the top flight.

Chris Hughton, though, had not done enough. Brighton, wary of another season of struggle, swiftly and controversially dismissed their manager. For some, frustrated by a year of cautious and conservative football, the decision was justified. For others, it was reckless and harsh.

But Brighton have already moved on, securing a target they had clearly identified before Hughton’s sacking was confirmed. Graham Potter, having guided Swansea to 10th in the Championship in his first season at the club, is the Seagulls’ new manager, an appointment which signals a new direction for the club.

Potter, it can safely be said, will not be accused of playing drab and unadventurous football. Over eight years at Östersunds in Sweden, and then at Swansea, the 44-year-old earned a reputation as a coach who priorities possession-based, attacking football.

Only Leeds United and Brentford averaged a higher percentage of possession per game than Swansea’s 56.43 per cent in the Championship this season. And no team completed more passes per 90 minutes (451.17).

At Östersunds, Potter took his side from the Swedish fourth tier to the top division, eventually qualifying for the Europa League. His side met Arsenal in last year’s competition, offering a glimpse of their qualities to the rest of Europe.

Potter had long been on the radar of English clubs. His unique motivational methods – challenging players to perform in theatre and music projects – attracted attention, as did his tactical intelligence and flexibility.

He is clearly a talented and innovative young coach, and that is what has enticed Brighton. They were not simply searching for someone to keep them in the Premier League; they wanted someone who can do it in style, who can create a team with an identity. That is what Potter offers.

“I certainly don't think it's a gamble,” Brighton’s owner Tony Bloom said of the appointment. “Once we'd made a decision to get a new manager in – we'd done a lot of work previously on potential head coaches – he became the outstanding candidate very quickly. He did an outstanding job at Swansea in difficult circumstances. Making no choice is a bigger gamble. He's the right man for this club at this moment of time.”

Potter had been forced to work under financial constraints at Swansea but guided his team to within nine points of the playoffs. As an attacking unit, the Welsh side were highly effective. They ranked seventh in the Championship for big chances created (1.41 per 90) and ended the campaign having scored 65 goals in 46 games.

Swansea were less successful defensively, letting in 62 goals. But any concerns Brighton may have over defensive fragility should be alleviated by the performances of this season’s back four. Hughton’s side conceded 60 goals in the Premier League, fewer than any other team in the bottom seven.

The issue, for Brighton, was the dismal return at the other end of the pitch. That is what Potter has been brought in to address. Too often this season Brighton sat back and failed to take the initiative in a game. 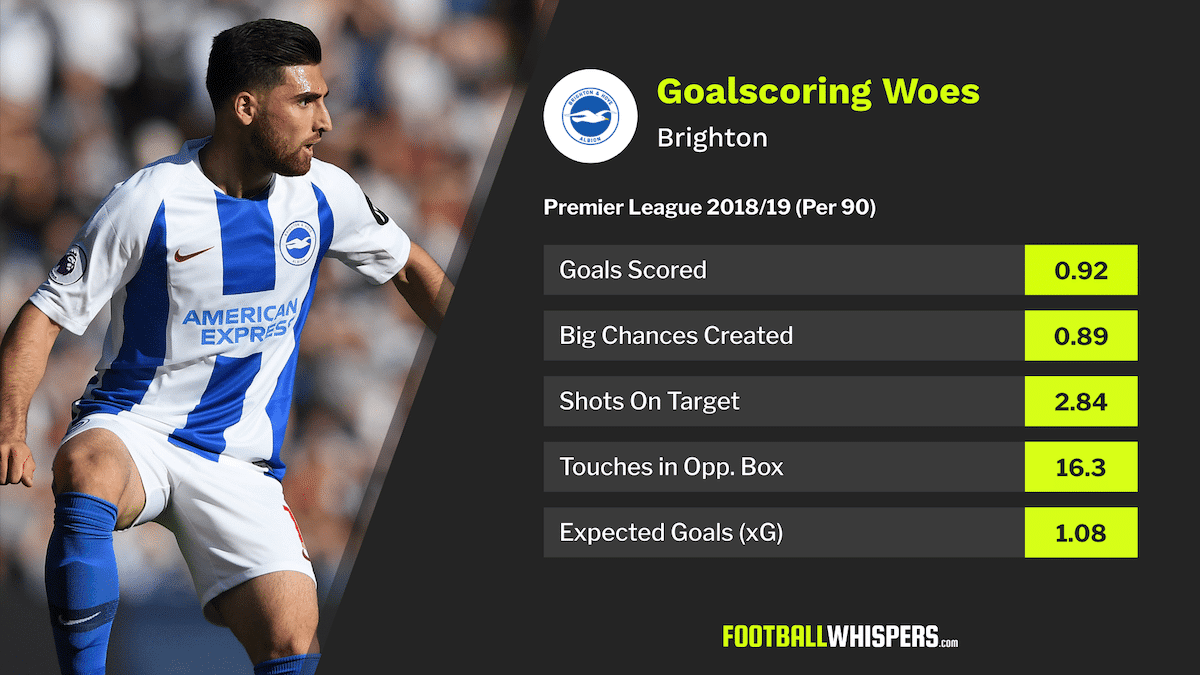 “I'm not expecting massive amounts,” Potter has said of potential changes this summer. “A lot of good work has already been done. Any club will look to the window to try and improve. Chris [Hughton] did a fantastic job at this club. I've not met him personally, but everyone I've spoken to about him – we’re talking about a top human-being. I'm very fortunate and looking forward to trying to improve that.”

The foundations are in place for Potter to be a success at Brighton. It will take him time to get across his ideas, to introduce a very different way of playing. But this is an appointment that should spark excitement amongst Brighton supporters.

Despite this season’s failings, Brighton have some talented players at their disposal: the likes of Alireza Jahanbakhsh and Yves Bissouma were brought in for significant fees last summer but never really lived up to expectation. Potter, perhaps, could be the man to get the best out of this group of players.