Liverpool spent lavishly on new signings last summer and it certainly paid off. This time around, however, the Reds are being far more cautious in the transfer market.

The European champions secured their first addition of the current window when they parted with just £1.3million to snare 17-year-old Sepp van den Berg ahead of the likes of Ajax, PSV and FC Bayern.

And, according to countless reports, Liverpool are only prepared to pay around £20million to bring in a versatile wide forward.

After being linked with Nicolas Pépé, Ousmane Dembélé, David Neres and Memphis Depay, ending up with a player a tier or two below them will feel like a wasted opportunity.

Michael Edwards and the recruitment team at Anfield know what they're doing and should be trusted. But not to capitalise on a position of power is risky and if they get it wrong the Reds could rue this summer for years to come.

However, just because Liverpool don't want to be held to ransom and get mixed up in potential bidding wars doesn't mean they aren't going to be in the mix for potential gems.

There are a number of players out there who represent superb value for money and fall within Liverpool's budget. Not only do they tick the box financially, but they also fit in terms of style and profile.

Here, we take a look at four potential bargains for the Reds this summer as they look to add attacking reinforcements. 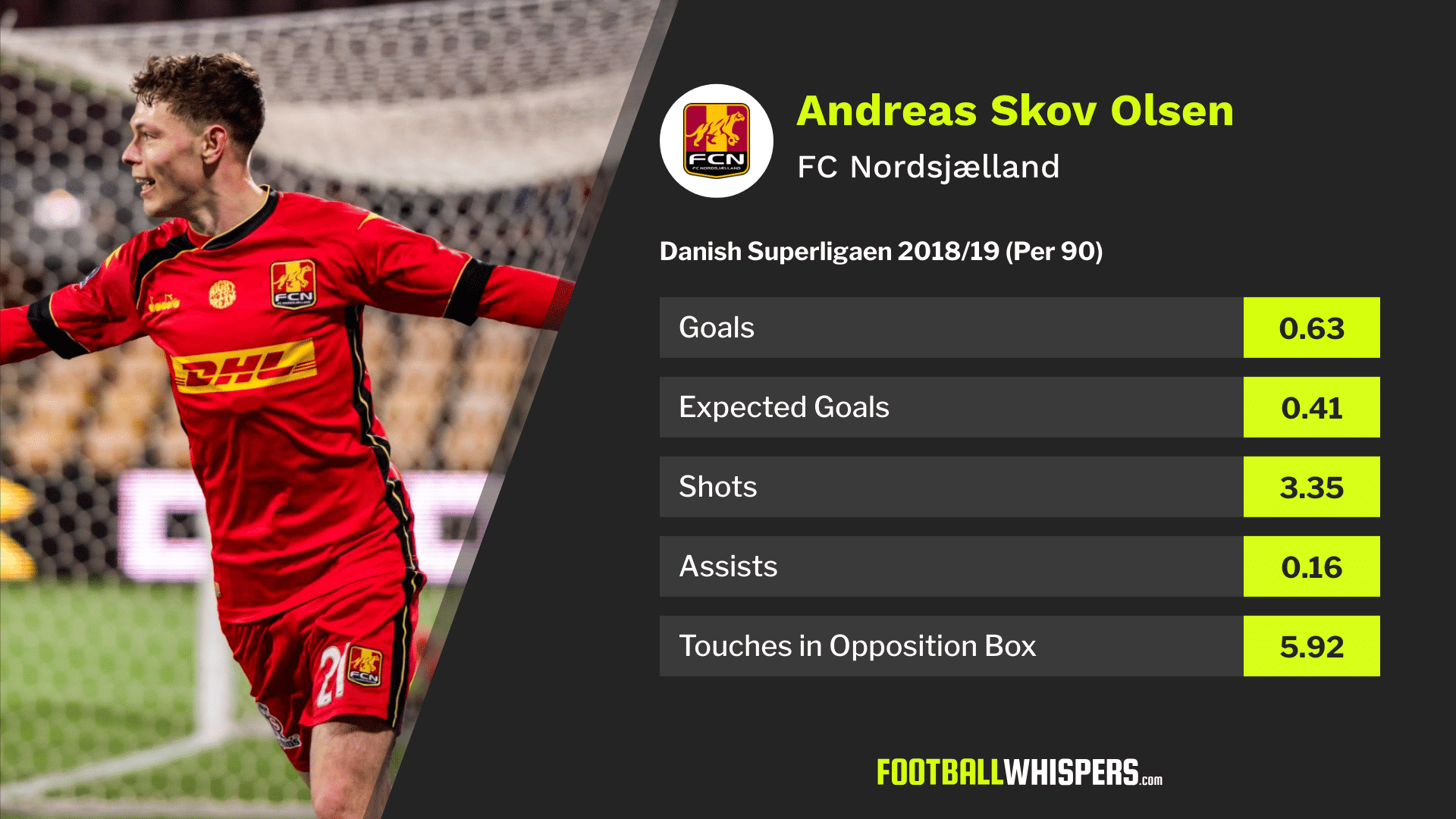 Recently linked with Spurs, Olsen is reportedly available for as little as £15million. The 19-year-old attacking sensation has just 12 months remaining on his contract and Nordsjælland don't want to lose him to rivals FC Copenhagen on a free next summer. So they're willing to cash in.

The fact Olsen has only delivered in the Danish league goes against him, but very few teenagers dominate a league in the manner he has and that should count for something. A right winger by trade, his future is as a No.9 but his versatility makes him an intriguing option.

Olsen is a reliable goalscorer and although he outperformed his expected goals last term, his average for that metric was still an impressive 0.41. That, coupled with his average touches in the box, highlights he gets into dangerous areas on a regular basis.

There's a touch of Marko Arnautović about Olsen; he’s a 6ft 2ins wide player destined to eventually lead the line. Yet he somehow manages to combine explosive acceleration and the tricky feet usually associated with wingers with the clinical finishing you might expect from a poacher.

He fits the forward profile Klopp seems to like. 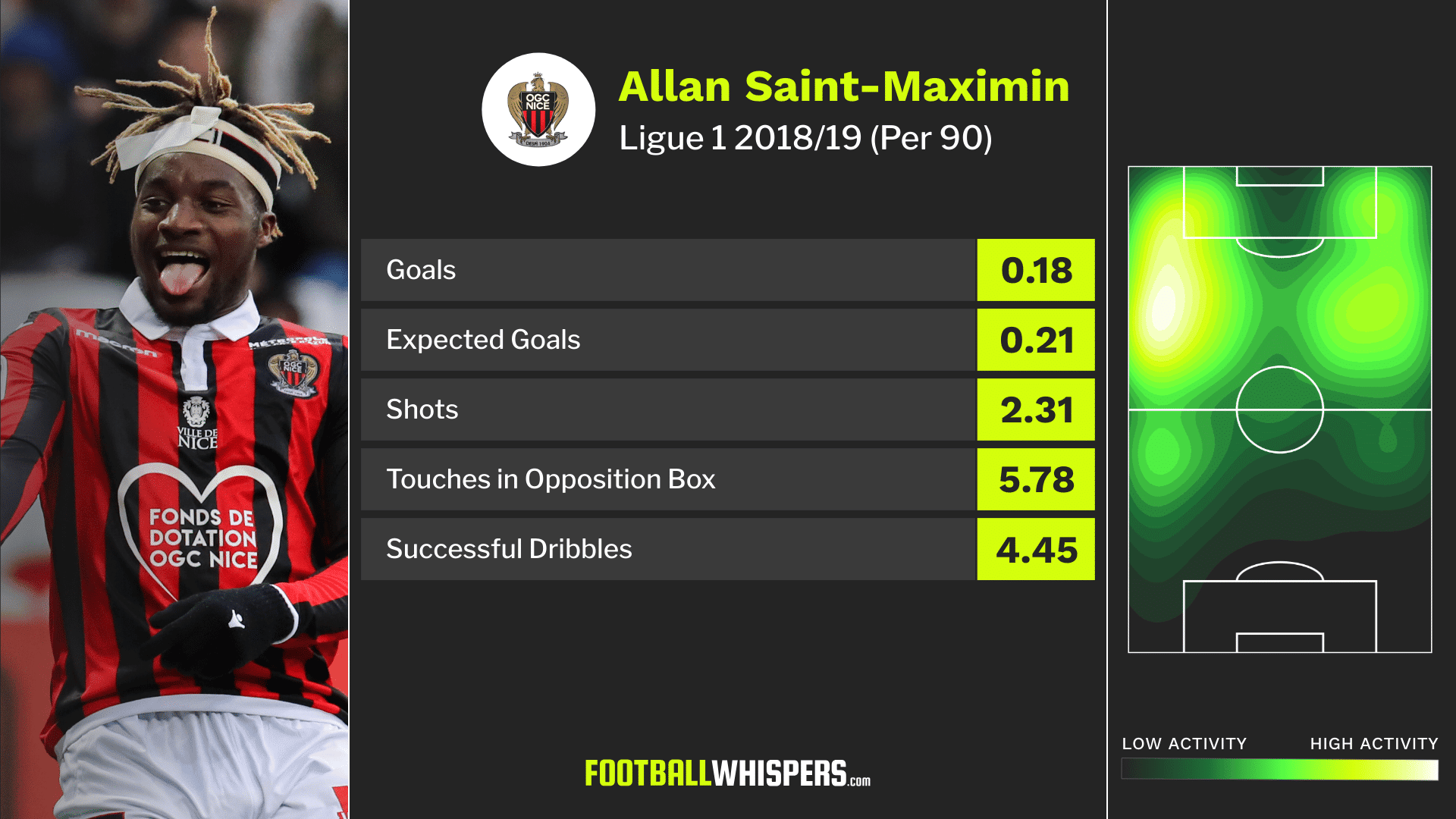 Named as the winger Crystal Palace want to sign if they part ways with Wilfried Zaha, Saint-Maximin probably wouldn't be top of the list if Liverpool fans had to name potential forward signings this summer.

OGC Nice are reportedly prepared to sell the 22-year-old for £22million. It's the top end of the self-imposed budget for the Reds but his unpredictability could well be worth it. He's not a serious goal threat but he still had an expected goals average of 0.20 last term.

His real value comes as a creator… but not in the traditional sense. Saint-Maximin isn't the sort to sit deep and pull the strings, instead he dictates what happens in the final third with the sheer number of dribbles he completes, along with his eagerness to get into the penalty area.

Saint-Maximin is the sort of individual who opponents flock round to stop and this creates opportunities for others. In many ways, he's the sort to thrive in chaotic situations.

Liverpool are famed for how devastating they are in transitional phases. The Nice star would create more of those moments. 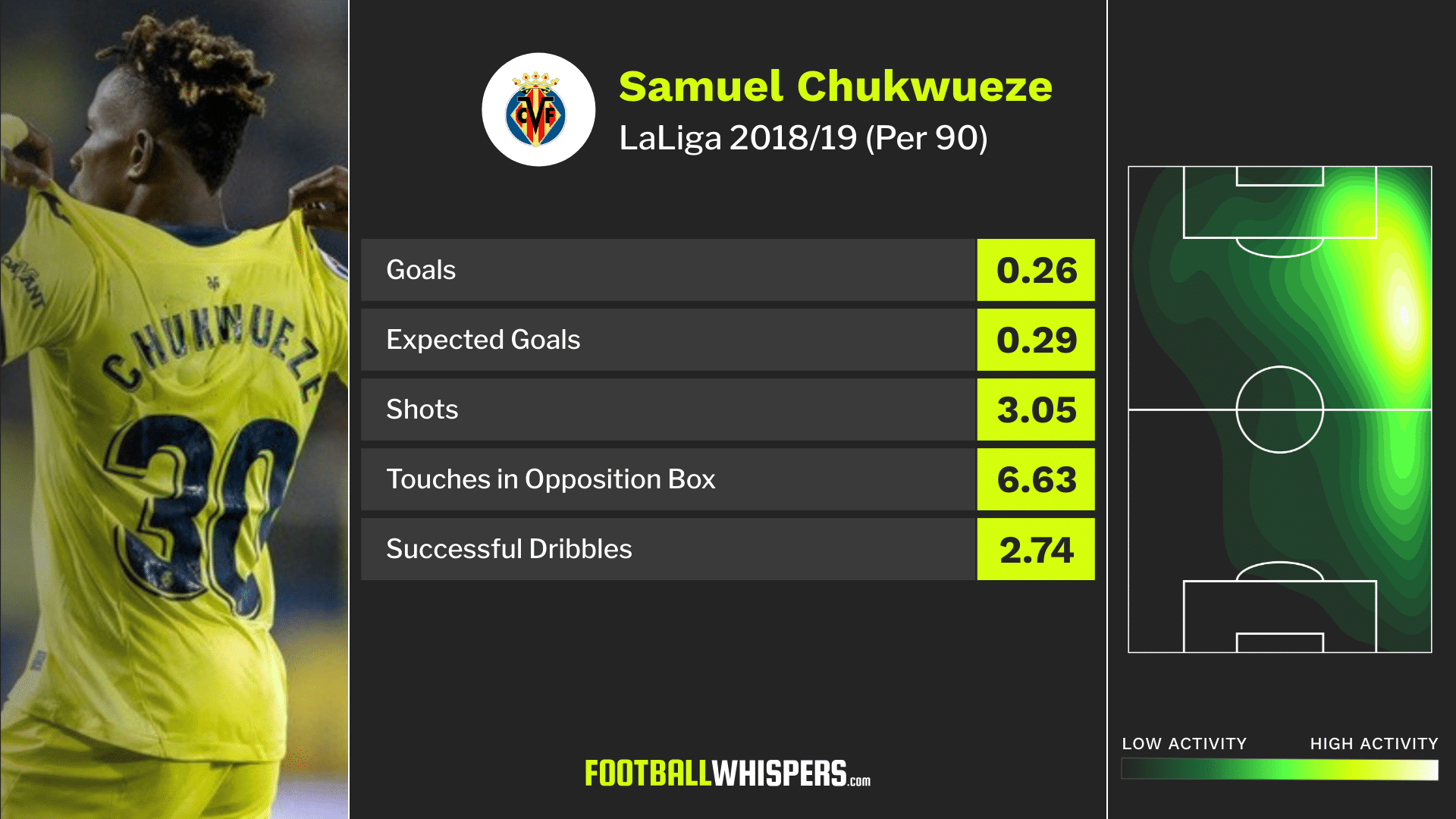 Named as a Liverpool transfer target, the 20-year-old reportedly has a £54million release clause in his deal. However, Villarreal did cash in on Pablo Fornals for below his supposed clause. They seemingly aren't sticklers like other Spanish clubs so there is room to negotiate.

Though likened to Arjen Robben due to his nature to attack down the flank before cutting inside, Chukwueze is confident on his right foot and this adds another dimension to his game. He's a wildcard and this makes him difficult to stop.

He rides challenges and isn’t easily bullied. He’s a confident player and unlike many others, he doesn’t solely rely on space to do the damage. It helps, undoubtedly, but the Villarreal winger can beat men in tight areas and creates his own opportunities that way.

The fact Chukwueze averages over six touches in the area, playing for a team who struggled in LaLiga, more than Sadio Mané this season, shows a number of things.

The Nigeria international gets beyond the last man, a dying art in the modern game, he’s calm and composed in the area which leads into an important point: he will eventually be a regular goalscorer. 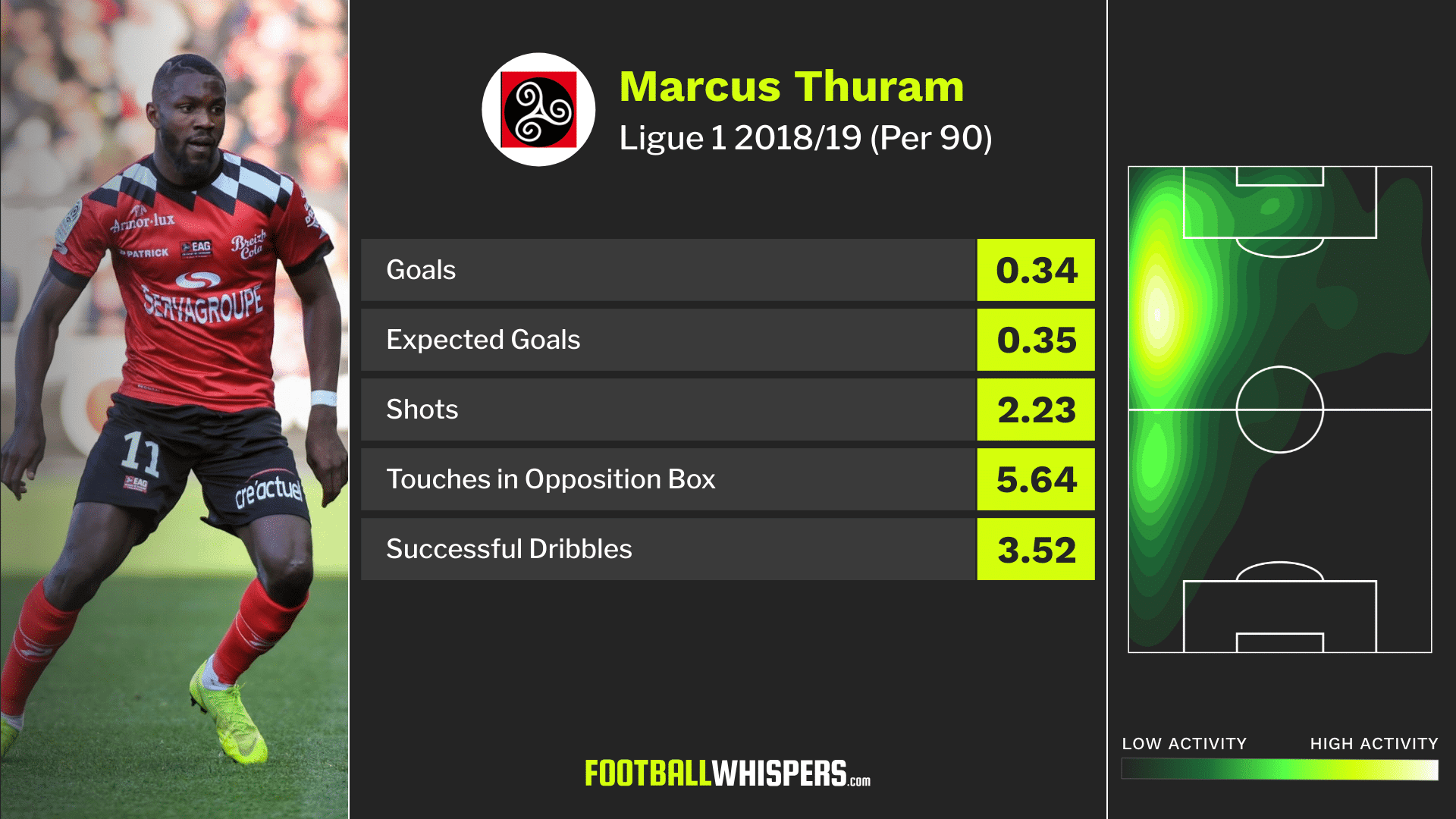 Thuram played for a relegated side last season yet still managed to post some eye-catching numbers. He also impressed for France at the Under-21 European Championships, coming off the bench against England to create four chances during a 20-minute cameo.

Though he did boost his tally for the season (10) in Ligue 1 with penalties (four), it is worth noting that even with those removed he still struck over 25 per cent of the goals Guingamp scored last season.

Liverpool have shown in previous years that they have no issue with buying from relegated sides, albeit they're usually clubs in England. However, if Thuram does, in fact, has a £9million release in his deal then it's hardly even a gamble.

The Guingamp maestro can beat a man, is composed in tight spaces and is always looking to get into the penalty area. He's fit right in with the players already playing in attack at Anfield and he'd likely learn from them. There's a lot to work with.