Celtic’s start to the 2018/19 season has been their worst since Brendan Rodgers took charge. The reigning champions and double treble winners currently find themselves lying sixth in the Scottish Premiership table, with two defeats from their opening six league games.

There are a variety of theories as to why they have begun so poorly. It has been suggested that some players simply don’t want it as much as they did before. Others have pinned the blame on an underwhelming summer transfer window that saw Moussa Dembélé leave on deadline day without replacement.

However, contrary to such speculation, it is possible to pinpoint more precisely why Celtic have gone off the boil early on in this Scottish Premiership campaign. Quite simply, they aren’t attacking as effectively as they were in either of Rodgers’ first two terms as manager.

While they have more of the ball than before, they aren’t using their possession as well. As a consequence, they are finding it tougher to break down opponents. The bad news is that this is a genuine problem. The good news is that the problem is obvious, and can be solved.

What these numbers essentially confirm is that Celtic are having more of the ball than they did in either of Rodgers’ first two years at the helm. But this is more to do with the fact that four of the six teams they have faced – Hamilton Academical, Kilmarnock, St. Mirrenand Livingston– were happy to concede the ball to them than it is to do with Celtic’s possession being particularly difficult to defend against.

Unfortunately, the dominance of possession Rodgers’ side have enjoyed thus far is redundant because the quality of their possession has drastically declined. Again, this can be shown through the relevant data.

The amount of through balls a team averages gives an indication of how many times they are playing through their opposition. This is valuable for a few reasons. One reason is that penetrating the opponent’s defensive block is a quicker form of attacking than going around it. Another reason is that it forces the opponent into a decisional crisis – rather than shifting and retaining their shape, they must decide who leaves their position to press the ball, potentially opening up space elsewhere. Finally, playing through the opposition tends to eliminate defenders, or entire lines of defence.

Celtic are averaging fewer through balls per 90 minutes than they did in 2016/17 and 2017/18. Indeed, their average of 5.56 is almost half what they averaged in Rodgers’ first season as manager. This suggests that they are finding it harder to open up defences when in possession.

They are also making fewer progressive passes and deep completions per 90 minutes. Progressive passes are a measure of how many passes to advance the attack a team plays, while deep completions are a measure of how many passes a team makes in and around the opposition’s penalty box. That Celtic’s numbers have decreased in both of these categories suggests they are now advancing attacks and entering the final third less often.

It is telling that these numbers have declined year on year. So too has Celtic’s expected goals (xG) per game. In 2016/17, their xG per game was 2.58, while in 2017/18, their xG was 2.04. This season so far their xG per game is 1.85. Put simply, their decline in progressive and penetrative possession has led to a decline in the quality of chances they create.

There are tactical explanations for these statistical decreases. One involves a lack of quality in the back line; another relates to the team’s positional structure. In both cases, improvements are necessary if Celtic want to get back on top of the Scottish Premiership over the coming months.

Rodgers has often opted for a three-man first line of build-up this season. This tends to involve the nominal right-back, Mikael Lustig, staying deep to form a three with the two centre-backs while the left-back, Kieran Tierney, pushes on down the left flank.

The three-man first line has its theoretical advantages. Firstly, the extra player means more potential starting points for the attack, and having more starting points means more potential angles to progress the attack through. Secondly, the extra player can make the team more resistant to a high press, as there are more players for the defending team to cover and close down.

If used correctly, the three-man line can be an offensive weapon. Unfortunately, personnel issues have hindered Celtic in accessing this theoretical advantage this term.

Marvin Compper has barely been seen since signing for the club, while Jozo Šimunović hasn’t been able to recapture his best form over the last year or so. Filip Benković, signed on loan from Leicester City, is still getting used to Rodgers’ tactics, while Tierney is needed elsewhere. This has meant two young players, Kristoffer Ajer (20 years old) and Jack Hendry (23), have had to take on roles of real responsibility.

Ajer has showcased moments of excellence when dribbling out with the ball at feet, though his decision-making still needs work. Too often he ends up in cul-de-sacs with opponents surrounding him. Hendry, meanwhile, has been jittery on the ball after a difficult start to life at Parkhead.

Celtic’s centre-backs are too often averse to passing forwards. Instead, they will pass it side to side amongst themselves, failing to open up the opposition. 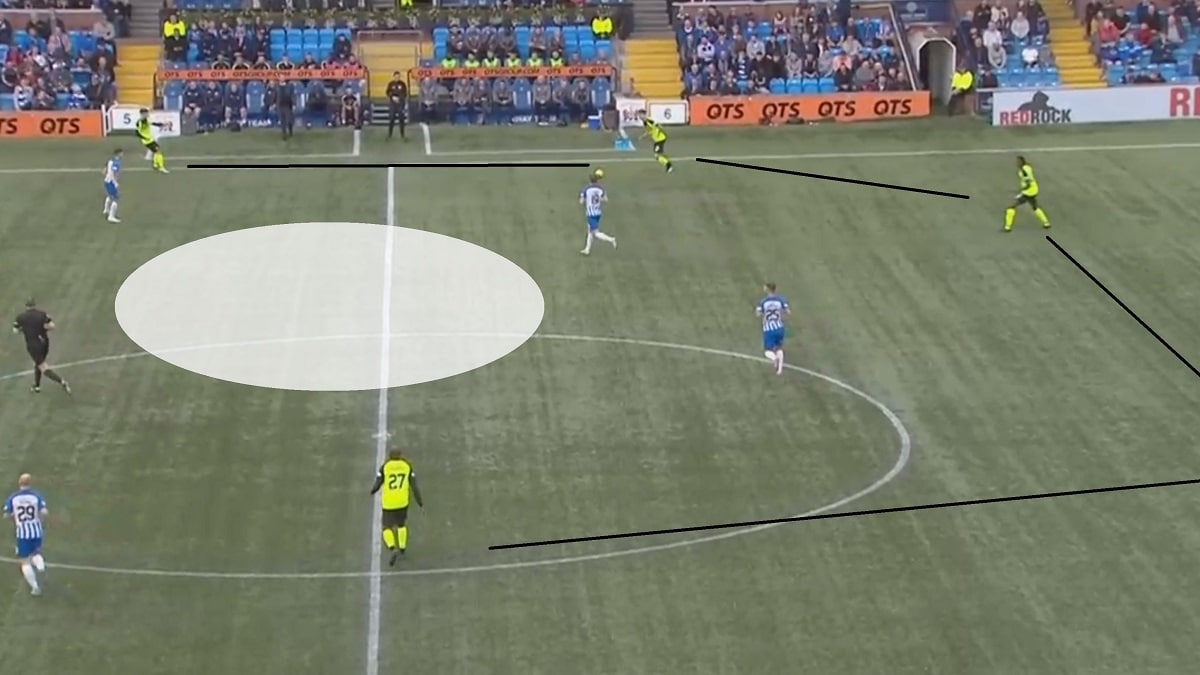 A poor positional structure, as seen above, has only compounded the aforementioned centre-back issues. Here, against Kilmarnock, both of the team’s central midfielders – Scott Brown and Youssouf Mulumbu – are inaccessible with the ball having moved wide. The former has dropped back between the centre-backs, while the latter remains in the left inside channel. Consequently, Celtic cannot work the ball inside.

If the central midfielders continue to drop deep and to the side, the onus then falls on the back three to progress the ball. But, as discussed, they aren’t entirely comfortable in doing so. This is largely why Rodgers’ side failed to find the net away to St. Mirren, a side whose front two man marked the Scottish champions’ central midfielders while leaving the centre-backs to their own devices.

Celtic must now focus on their positional play – simply having possession is not enough to win games. If they can tweak their attacking structure and stop relying so much on the centre-backs for penetration, they can re-find their exceptional form of the previous two seasons.