It was around this time last year that Liverpool's interest in Nabil Fekir went public. The Lyon man had the season of his career and looked as though he'd be heading to Anfield to fill the Philippe Coutinho void in attack as the fourth forward.

On paper, the Swiss Army knife type forward was the perfect fit. Capable of playing across the front line, there was even a belief he could do a job in midfield as the attack-minded number eight.

But perhaps the biggest selling point for Fekir was how he could play the Firmino role. Adding a player like him to the ranks would've changed the game and Jürgen Klopp's men would've been even more unpredictable going forward.

However, it wasn't to be. The deal collapsed at the last minute and Liverpool turned their gaze towards strengthening other areas of the team. Alisson arrived and talk of a new forward was shelved.

Fast forward close to 12 months and the Reds still haven't filled the void Fekir was supposed to fill. There's been talk recently that a versatile forward is on the wishlist this summer but finding one isn't easy, despite Liverpool's current standing in the global game.

Reports out of Germany suggest Timo Werner and Julian Brandt, both Liverpool transfer targets, aren't looking to move abroad. Nicolas Pépé's price tag may be a deterrent to a frugal recruitment team on Merseyside.

A versatile forward is a vague description. Many believe it means a player like Mohamed Salah or Sadio Mané, a wide attacker capable of playing centrally. But what if it means the opposite? What if Liverpool want a Firmino type?

The Brazilian is unique. A lot of what he does can't be quantified so finding an alternative to him is tricky. It was after posting an article on possible Firmino understudies that a suggestion was made that perhaps the way to identify these players would be to look at possible midfielders who could be converted, just as the former Hoffenheim man was.

The best way to do this was to find similar players to Fekir and there was one player who ticked a number of the boxes.

The Sporting Lisbon man has been linked with a move to Anfield in the past. He's also been linked with Manchester United and Manchester City, too. While his long-distance shooting is a showstopper, it's general play in and around the area that makes him an ideal candidate. 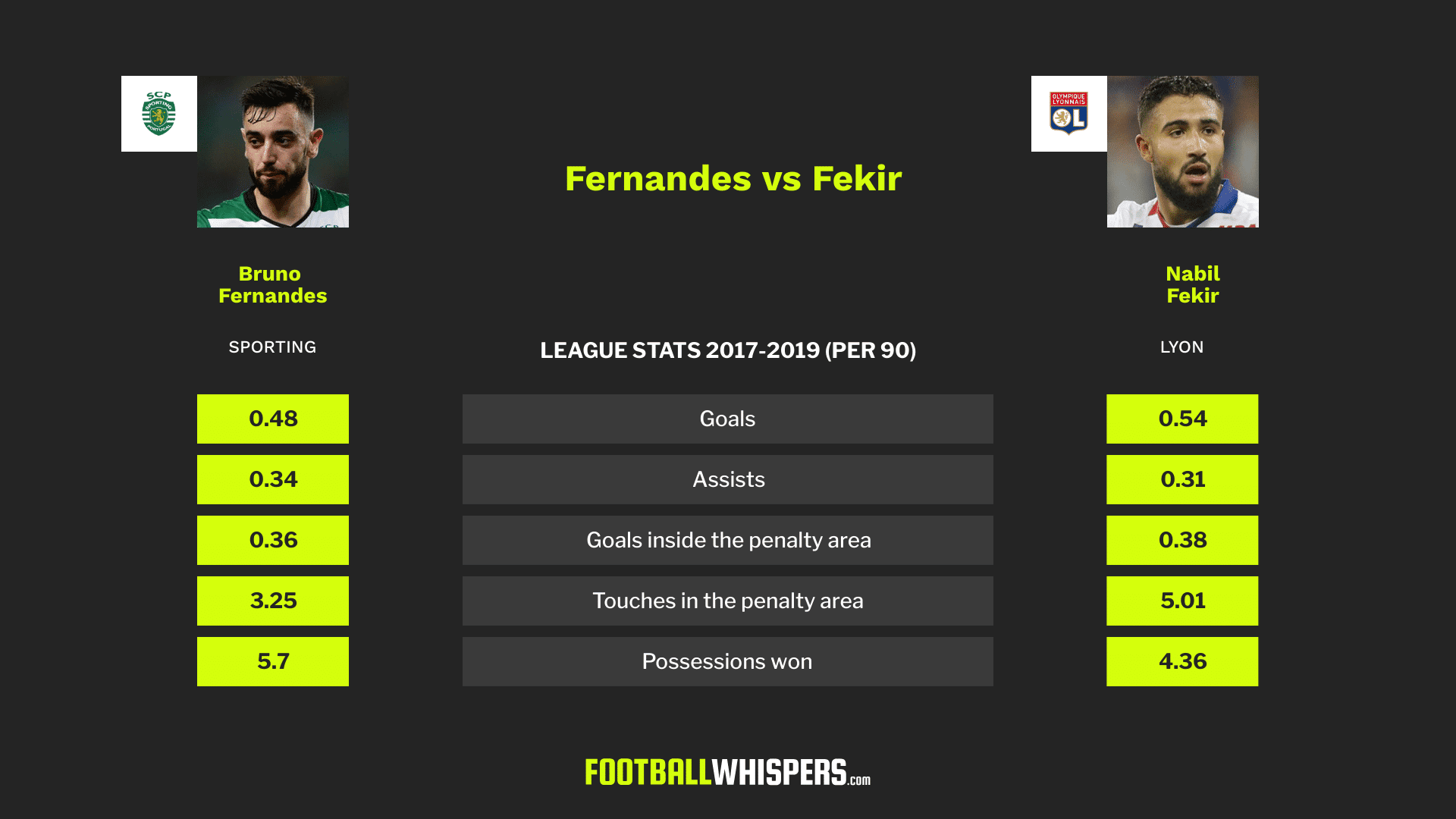 We've looked at two season's worth of data to give fairer averages. Both Fekir and Fernandes take penalties which undoubtedly helps their goal return but they shouldn't be punished for being calm from the spot. However, it is worth taking into account that not taking penalties would see their output drop.

Their goal return on a per 90 minute basis isn't too dissimilar, neither is the number of assists they average. Both players score the majority of their goals inside the penalty area, though Fernandes has managed a higher percentage with 70 per cent of his arriving inside the 18-yard area compared to Fekir's 57 per cent.

The Portugal international is more of a reliable goal threat.

Fekir does, however, average more touches inside the penalty area. Meaning he's more of a constant threat. But the systems both players are deployed in does need to be taken into account.

Fernandes was utilised in a 4-3-3 shape meaning he had different responsibilities to Fekir in the 4-2-3-1 system Lyon primarily use. Ask the Sporting midfielder to do more in the final third and there's no reason he couldn't.

His off the ball work rate is there, too. He, on average, won possession back 1.34 more times than Fekir on a per 90 minute basis. Again, though, the position he's used in will impact this. What it does show, and what should be taken from this, is that Fernandes doesn't shirk defensive duties. 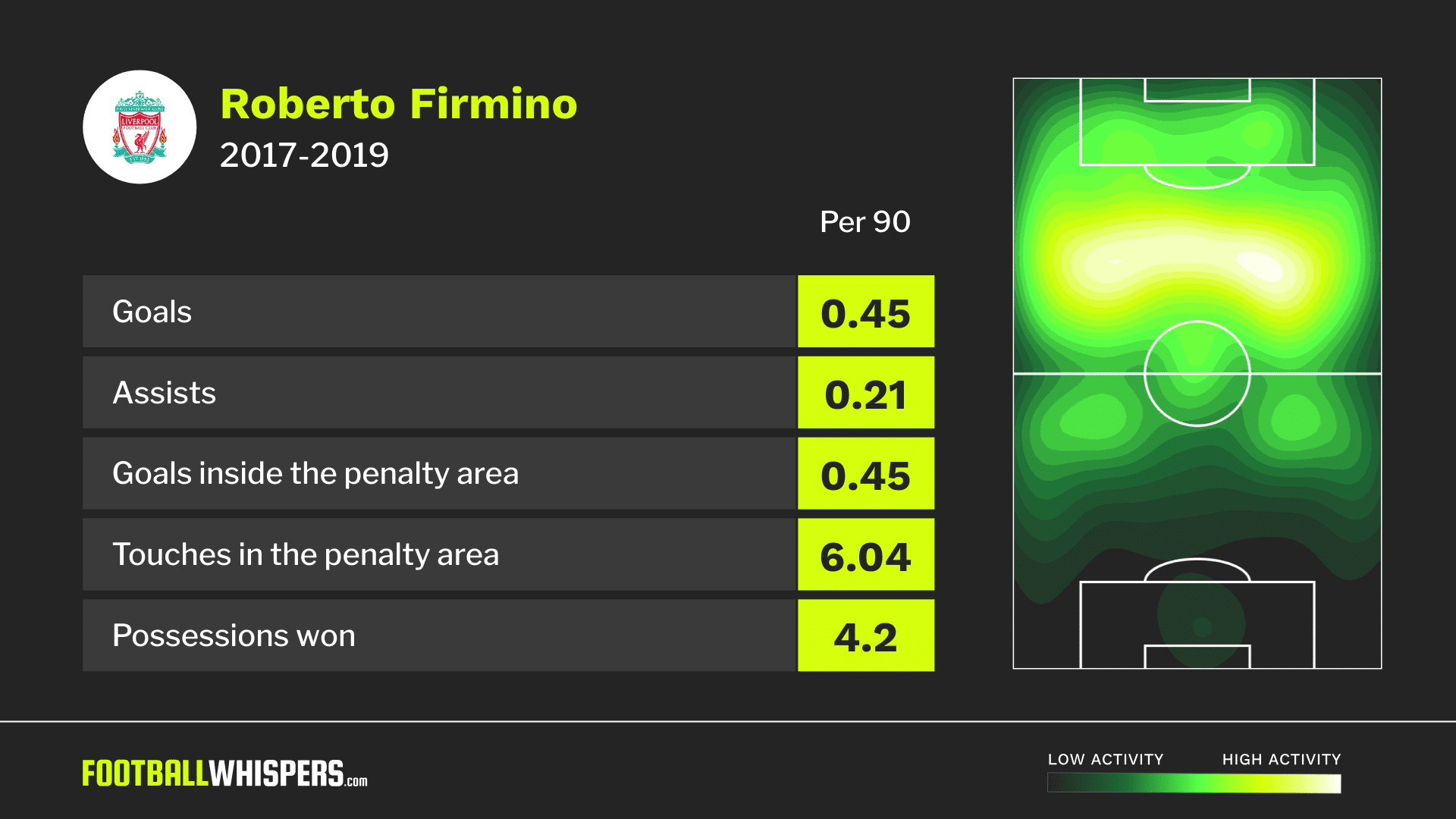 Fernandes has averaged 2.44 key passes over the two year period, more than both Fekir and Firmino. He also created more big chances than Liverpool's Brazilian forward.

But football is more than just numbers. Klopp's No.9 does a lot to bring others into play. His selfless movement creates opportunities for Mané and Salah. He runs the channels, fills in out wide when necessary and he's comfortable dropping into midfield when he's required to.

As Liverpool fans know, he's much more than just a forward. It's why, despite never having played there, Fernandes could do a lot of the things Firmino does. The 24-year-old already does a lot of it for Sporting.

He's comfortable in wide areas. He makes runs ahead of the ball. He links with the wide forwards in Lisbon. He'll never a traditional No.9 but Liverpool haven't ever needed that.

With Mané and Salah cutting inside a lot of the time, the shape can almost look like a diamond, something the manager referenced earlier on in the season. Fernandes can play the role at the tip of it.  He can play alongside and in place of Firmino in different variations of Klopp's favoured 4-3-3.

He isn't one many would usually associate with being a versatile forward, but in this Liverpool team, with these players around him, Fernandes could be just that. While £50million may seem steep for a player from the Portuguese league, but he's multifunctional and fits the usual Liverpool profile.