Following his sensation return to Manchester United, Cristiano Ronaldo will return to national team duties alongside new club teammate Bruno Fernandes. The Navigators host the Séamus Coleman and his Republic of Ireland team in this European World Cup qualifier.

Portugal vs Republic of Ireland free betting tips and odds

It has been six years since Ireland last arrived on Portuguese shores. That international friendly fixture finished 5-1 in favour of the Navigators and a similar result is expected in this World Cup qualifier. Cristiano Ronaldo and co. are winless in their last three competitive fixtures and will be gunning to get back to winning ways. However, Ireland can not be taken lightly as they are unbeaten in the same period but the level of opposition they faced was of considerably lower quality.

Barring their 1-0 defeat to Belgium, Portugal has been involved in high scoring affairs. Four of their preceding fixtures finished with at least three goals for the fans to cheer about. With Fernando Santos looking to put distance between Portugal and the chasing pack, expect his charges to dominate from start to finish.

After a three year stint with Juventus, Cristiano Ronaldo is back at Manchester United. The media fervour around his remains huge and the circus would have surely followed him with the national team. And there is one thing that stands out for CR7 is that he delivers when all eyes are on him. He is favourite to get on the scoreboard and we are backing him to realize that on Wednesday night.

Portugal vs the Republic of Ireland: Check out the best odds and the latest stats

Match Preview of Portugal vs the Republic of Ireland

The Republic of Ireland await stiff CR7 and Portugal test

Everton left-back Seamus Coleman will be leading the Republic of Ireland against Portugal in this World Cup qualifier. He will have a stiff task on his hands as he comes up against Cristiano Ronaldo and Bruno Fernandes, the two Portuguese attackers who will be found plying their trade on his flank.

The last time the Boys in Green faced off with the Navigators, it was a disaster. Portugal sent five past them with just one in reply, and a similar result awaits their time around. Cristiano Ronaldo had a barren night by his standards and will be looking to set the record straight in his path to being the highest goalscorer in international fixtures.

Questions About Portugal vs the Republic of Ireland 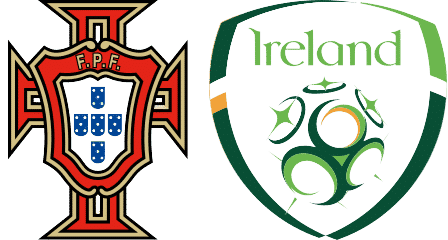 Where is the game being played? Estádio Algarve.

Which team is the favourite to win? Portugal.