Portsmouth welcome Harrogate to Fratton Park for an FA Cup second round tussle on Saturday. Can Pompey prolong their lengthy winning streak when they take on the Sulphurites? Read our expert predictions and find the latest odds for the game below in our match preview.

Portsmouth have won each of their last six games ahead of their FA Cup second round skirmish with Harrogate. Find our top three predictions for the fixture below.

With just three victories from their last ten games, Harrogate’s form has been on the slide over the past couple of months and their slump has come at an inopportune time as far as their FA Cup campaign is concerned. In stark contrast, Portsmouth are targeting their seventh straight win this weekend and their superb form coupled with their superior League One quality makes them our tip to push into the competition’s next round at the Sulphurites’ expense.

Portsmouth’s momentum should be enough to get them over the line this weekend, though we expect Harrogate to notch a consolation at Fratton Park. Simon Weaver’s charges have scored at least once in six of their last eight games on the road, while BTTS was a winning bet in five of the same fixtures. Pompey meanwhile, have impacted the scoresheet in ten of their last 11 assignments, so back both teams to register on Saturday.

Portsmouth star Marcus Harness is in the midst of a real purple patch at present and the 25-year-old has hit four goals in his last five appearances for the club. In total, Harness has nine goals for Pompey since the summer and he is well on course to record the most prolific campaign of his career so far. Brimming with confidence, Harness is the outstanding choice in the anytime scorers market this weekend.

After turbulent September and early October runs, Portsmouth have clicked into gear and their nine-match unbeaten surge since their 0-4 reverse to Ipswich includes a sequence of successive victories in their last six matches. Defensively, Danny Cowley’s team have really turned a corner and with the playoff line in sight in League One, Pompey can approach the FA Cup with confidence.

Harrogate are hanging on to their playoff position in League Two by their fingernails after a downturn in fortunes, though boss Simon Weaver will hope that their wins over strugglers Walsall and Carlisle, along with the point they secured at Swindon shortly after will steady the ship. In the last round of the FA Cup, Harrogate edged their way past non-league Wrexham, though they will need to perform at a much higher standard to match Portsmouth this weekend. 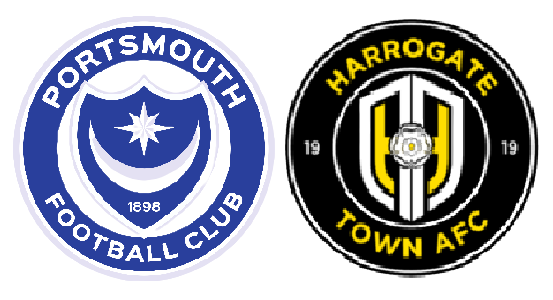 Portsmouth beat Harrogate 2-1 when the teams last met in a first round FA Cup fixture back in November 2019.

Who is Harrogate's leading scorer this season?