The situation at Fratton Park on Sunday is a clear one. A Portsmouth win means they are in the playoffs. Anything else will mean they are looking over their shoulders – and nervously too. Can they get the job done the easy way? Find out with our Portsmouth vs Accrington match preview with free tips, predictions and odds mentioned along the way.

Making a prediction for Portsmouth vs Accrington might have been a tougher call to make had this game taken place a few weeks ago because neither team are nailed on based on their form. Portsmouth have won just two of their last five with Accrington having won just once in the same period. The reason we're tipping Portsmouth to win is based on two key factors. The first is that it's the only result that will guarantee their playoff place with the other the fact that they have better players. Better players plus greater motivation should equal a win.

When it comes to the number of goals seen in matches involving Portsmouth and Accrington they're both fairly middle of the road. Neither side struggles to score goals and neither is water tight; that said, Portsmouth are much better defensively than their visitors. Across the season Accrington have averaged 2.9 per game with Portsmouth at 2.6 but it's their more recent form that is really interesting. Pompey's average remains at 2.6 over their last 10 played but Accrington's is 3.7 courtesy of a defence that's shipped 24 goals in that time.

Pompey to win but they'll concede too

If you're mathematically inclined you might have sussed out from the wording of our last prediction that Accrington have also averaged 1.3 goals scored per game in their last 10. Of course, that's only an average. They have actually scored in seven of their last eight with a 0-0 draw against Blackpool the exception. We expect them to score against Portsmouth too but don't envisage it being enough to take anything from the game as detailed in the first of our tips. Accrington have a decent track record of finding the net against their hosts though with a minimum of one goal scored in each of their last four meetings.

Portsmouth vs Accrington: Odds and more

The main thing you need to know ahead of this game is that a win for Portsmouth puts them into the playoffs. Guaranteed. In truth, if they end up seventh their season will have been a disaster. The good news for Pompey fans is that their visitors, Accrington, have absolutely nothing to play for. For the neutral, that means we could see some exciting attacking play from Portsmouth as they go all out for a win.

Portsmouth vs Accrington: A final rundown 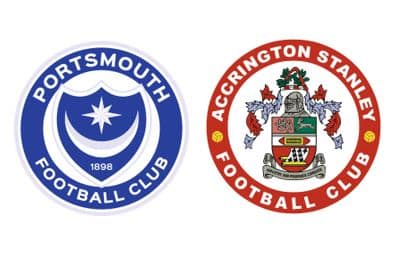