Swindon hold a slender advantage coming into this second leg tie. Will they make it to the playoff final? Find out with our Port Vale vs Swindon match preview with free tips, predictions and odds mentioned along the way.

Swindon will not lose

Both teams have had contrasting results in recent weeks. Port Vale are on a downward spiral right now; they lost four of their last five games, which is disappointing considering they had no losses in nine prior games. On the other hand, we have a Swindon side that's coming off five consecutive wins; they've been very efficient at scoring goals, having found the net 12 times in those games. Also, Swindon have had Port Vale's number in recent years; they won three of the last four meetings between these two, and have lost just twice in their last nine encounters. With this in mind, we believe that Swindon will not lose this match.

We fancy both teams to hit the net

In spite of Port Vale's poor recent form, they've been very consistent when it comes to finding the net; Darrell Clarke's men scored in nine of their last 10 games. Conversely, Port Vale kept just one clean sheet in their last five games; they allowed nine goals in those five games. Like Port Vale, Swindon have scored and conceded a lot of goals recently; they found the back of the net in all of their last seven games, whilst conceding in five of those games. It's worth mentioning that the last three meetings between Port Vale and Swindon saw goals scored at both ends; and for this reason, we believe that both teams will register goals today.

Port Vale vs Swindon: Let's look at the predicted lineups

There was little between these sides in the League Two standings after 46 games and there wasn't much in it during the first leg either. Who will find their way to the playoff final?

Port Vale have been going through a rough patch recently; they lost three of their last four regular season games, losing automatic promotion to League One in the process. Additionally, Port Vale lost the first leg of their playoff tie with Swindon; they'll hope to bounce back from that loss by overturning the deficit here.

Swindon managed to steal a promotion playoff spot on the last day of the regular season; they won all of their last four regular season games in order to get that spot. The Robins extended their winning streak to five games by defeating Port Vale in the reverse fixture of this clash; they'll be eyeing a place in the playoff final as they visit Vale Park.

A quickfire FAQ on Port Vale vs Swindon 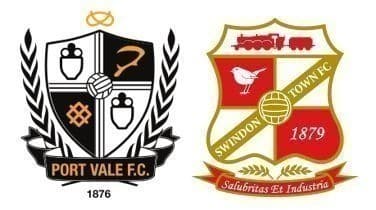