They may have lost the crucial North London derby at Wembley, but Arsenal fans can have reason to rejoice this week. They don’t play another away game until March 4.

Brighton & Hove Albion at the Amex Stadium is their next fixture on the road and the Gunners will hope to pick up their first league win of 2018 and just their fourth of season.

In terms of their home record, Arsenal sit third. But away from the Emirates they have the ninth-best record with just 13 points from 14 games. Worse than Burnley, Leicester City and Watford.

In order to fix the problem, there has to be a realisation of where the issues lie, which is something Arsène Wenger has struggled with over the past ten years.

Comparing their numbers home and away, some areas remain the same, where there are massive drop-offs defensively.

In terms of possession of the ball and the percentage of passes Arsenal complete, there’s no difference. The amount of shots they concede goes up from 9.5 at home to 11.7, but this still ranks them sixth in the Premier League, so the increase is expected.

Even their style of play doesn’t deviate much. They make the same number of crosses, through and long balls. Their opponents don’t change how they tackle the Gunners either and they face the same amount of crosses and long balls.

Scoring goals is the first issue, which stems from where they are forced to attempt shots.

Their average attempts per game drops from 19.2 to 13.6, which sees their ranking go from third to fifth. But, even worse, they only manage 4.5 shots on target per game – is sixth in the league.

At the Emirates, they attempt 57 per cent of their shots from inside the 18-yard box. On the road the amount of attempts they have from outside the area increases from 35 per cent to 45 per cent.

Trying to score from distance will always decrease your chances of finding the back of the net. You are not playing the percentages and, more often than not, you will get found out.

Arsenal’s biggest issue come on the defensive end; dominate the home team and you won’t need to rely on scoring a high number of goals. 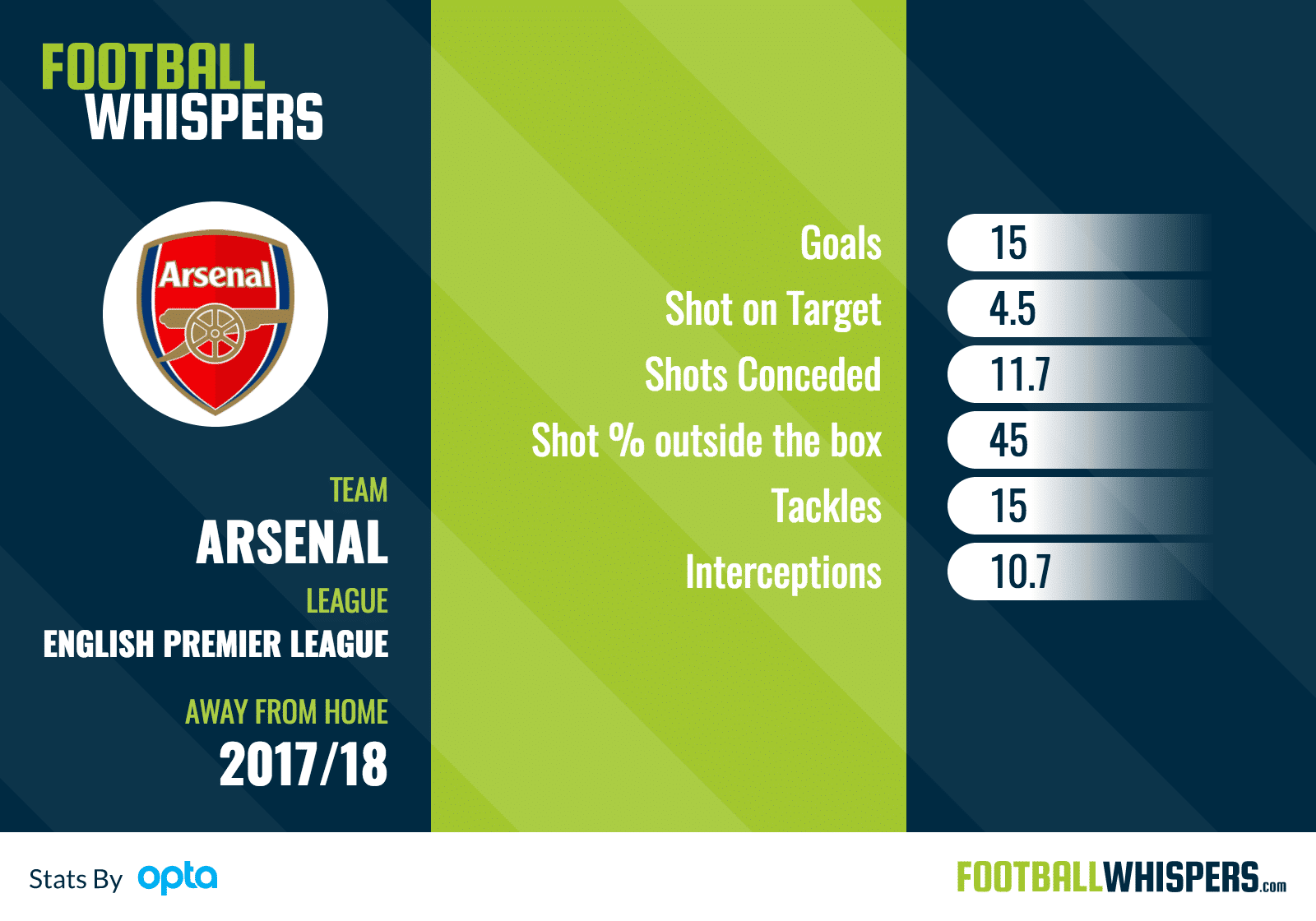 Having the seventh-worst goals against record renders the amount of clean sheets the Gunners manage with Petr Čech irrelevant. Following Saturday's 1-0 defeat to Spurs, Arsenal's No.1 has conceded in nine consecutive league games for the first time in his career.

That means the Czech goalkeeper is waiting for his 200th Premier League clean sheet.

The number of shots the Gunners face on the road goes up from 9.5 to 11.7, but they still rank sixth, again, so the increase is to be expected.

While they win 17.8 tackles per game at home, that figure drops to 15 away from home, which sees them fall from third to 16th, the most significant ranking drop in any of the categories.

Also, out of all the teams in the top six, Arsenal are the only club who make fewer interceptions on the road. Their 11.2 per game ranks them 14th.

Even Manchester City, who dominate games both home and away, see the the number of times they intercept the ball go up. There is an understanding that to win on the road you need to put in more effort and work harder.

It doesn't seem to be reaching the players and staff over at the Emirates, however.

Looking at the goals and chances they conceded, you can see a lack of intensity on the defensive front, starting from the midfield and trickling down to the back four or three. Regardless of what formation Wenger coach decides to play, the results have been similar.

Arsenal's last league win came at Crystal Palace and with 12 interceptions and 21 tackles they outperformed their averages this term, working hard for the three points.

Even against Bournemouth, where the Cherries came from behind to win, things started well before falling apart after the break.

Ten of their 15 interceptions came before half-time then, from Callum Wilson's 70th-minute equaliser until the end of the game, they managed just one.

Where Arsenal fail is in their ability to pressure the man in possession, limit the space they allow and reduce the oppositions time to think.

The signs were there against Swansea too. When the Welsh side looked to hit the away side on the break, Arsenal didn’t do enough to stop the counter. 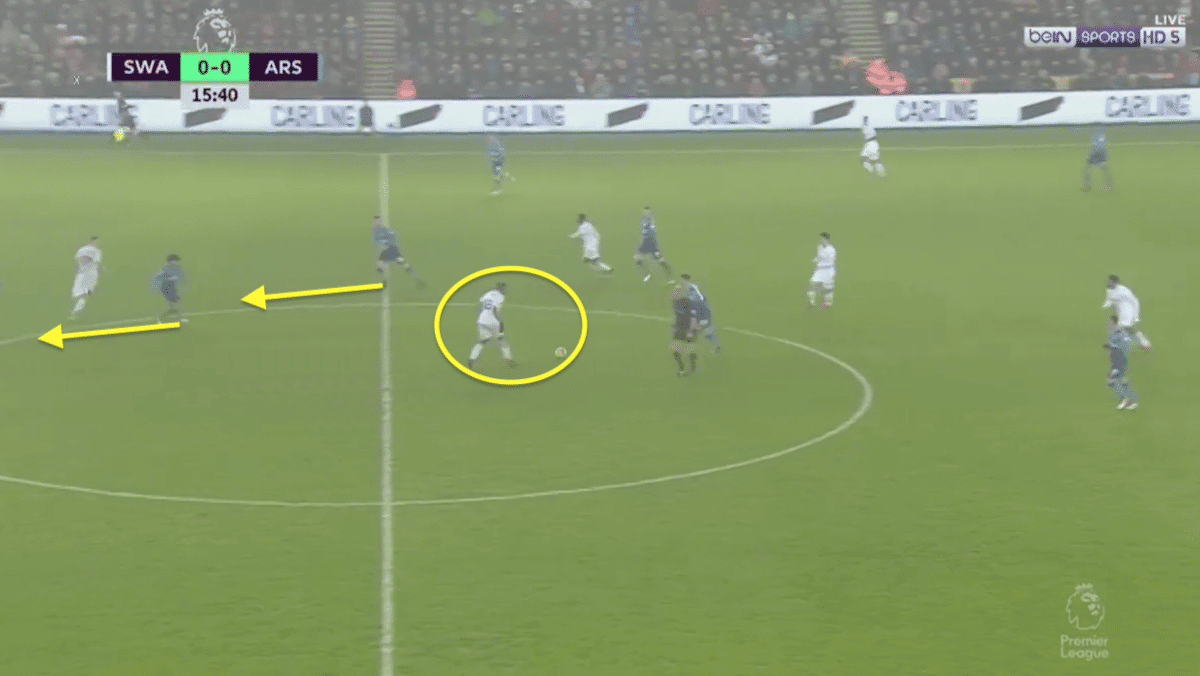 From the start they allowed players like Leroy Fer time to turn and push the ball up the field. The midfield were more worried about getting back, rather than dealing with the man in possession.

No one should have been surprised when Sam Clucas equalised in the first half. 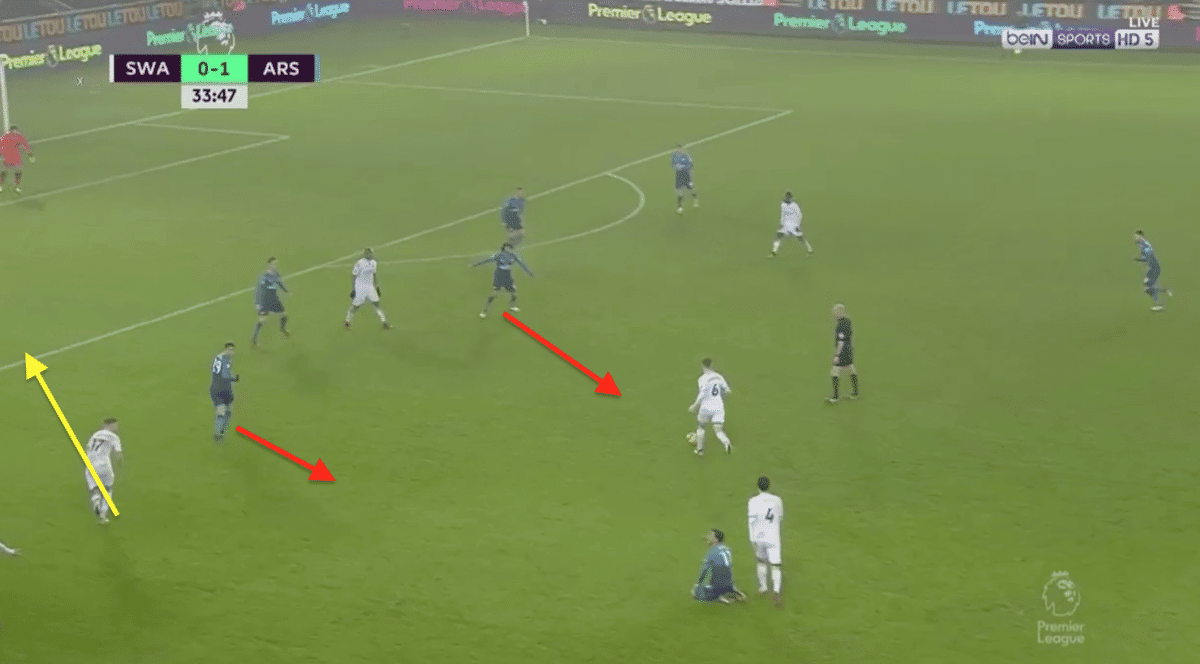 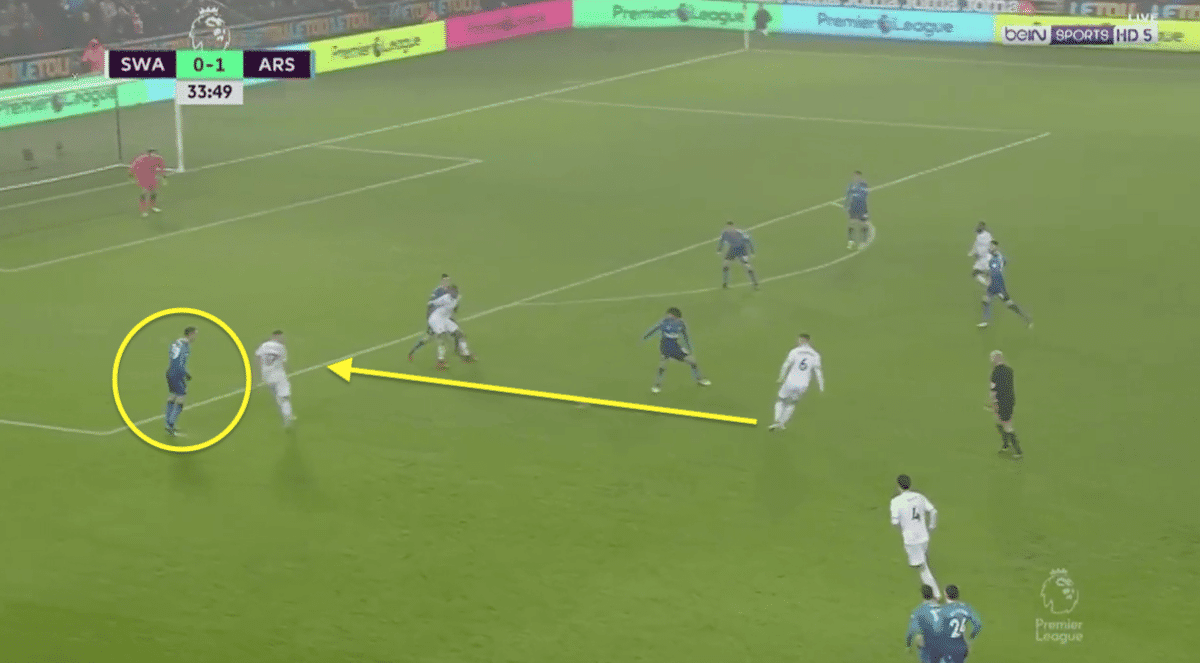 No one steps up to close down Alfie Mawson on the ball. You can see from the above graphic how deep Mohamed Elneny is playing, and Granit Xhaka makes no attempt to close the passing lane.

Xhaka lets the midfielder run straight across his path and Mawson slides an easy pass in to set up the goal.

It’s a chance which can be easily avoided with some effort and desire, but sadly, this is not an isolated incident.

Arsenal won just 11 of 17 tackles that evening at the Liberty Stadium and managed a paltry eight interceptions. Things can go against you game-to-game, but you will always be in control of how much effort you put into a performance.

As an organised unit, Saturday’s derby against Spurs was one of their better away performances and it showed in the statistics, finishing bang on their averages of 12 tackles and 11 interceptions. It still isn’t good enough, but it gave the away side a chance.

However, once again, too many opportunities came Spurs' way with the midfield and defence failing to put pressure on the ball. Tottenham's winner was a fine example of this. 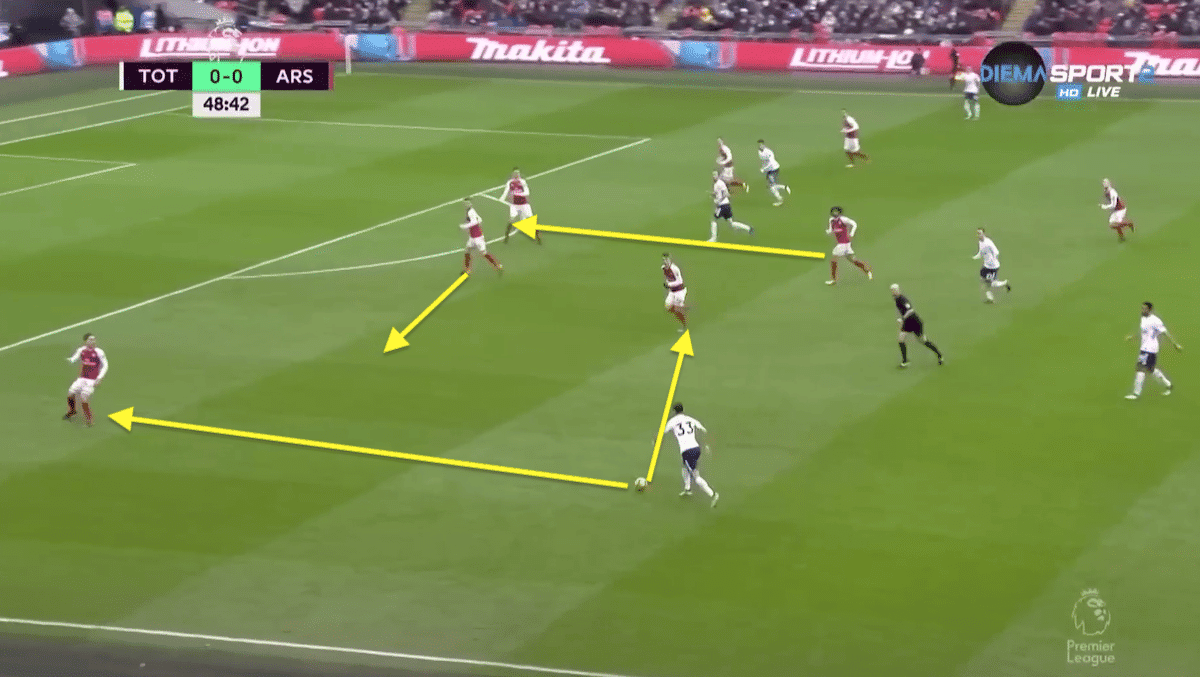 Arsenal have numbers back, so there is no excuse for someone not coming out to force Ben Davies into making a decision.

Héctor Bellerín can push out and let Shkodran Mustafi cover the right-side of the defence. Especially if Elneny drops back as he should as the deepest midfielder.

Everyone stands off and Davies has time and space to curl in a brilliant cross for Harry Kane to head home.

The attack is an issue as well, with the Gunners attempting too many shots from distance and not getting the ball into the same areas they would at home. But the main issues stem from the back.

We are not seeing the same level of commitment to closing down the opposition as the other top-six teams.

Winning the ball back in the midfield – or as high up the pitch as possible – creates opportunities to hit teams on the break and conjure up chances in better areas.

Improving on this with the current crop of players will be difficult, but it’s the same issue which has plagued Wenger for a quite some time. If teams lower down the division can do it the quality of player isn’t the problem. It’s the level of effort required to go the extra mile – something which Arsenal and their coach have lacked for several years.