Mauricio Pochettino's detractors are growing smaller in number. By midnight on June 1, they might be extinct.

The Tottenham Hotspur manager has, against all odds, against everything modern football has taught us about the power of the pound note, brought his side to within 90 minutes of immortality.

They won't be favourites for the game; that distinction will belong to Jürgen Klopp's Liverpool, who destroyed Barcelona 4-0 at Anfield on Tuesday, having trailed 3-0 from the first leg, in a match which already feels as though it belongs to a previous season, such was the all-consuming drama of Spurs' own fight-back in Amsterdam.

Tottenham will be perfectly happy with their underdog status, though. After all, they weren't supposed to get past Manchester City in the quarter-finals. And, trailing 3-0 on aggregate at half-time of the second leg, the Johan Cruyff Arena shaking as the release valve on 25 years of pent-up frustration squeaked ajar, Spurs weren't supposed to upset Ajax, either.

But, without their best player, without making a first-team signing in 18 months, and up against a team that, while youthful, possesses generational talents who will surely go on to define the game's next decade, Tottenham pulled it off. 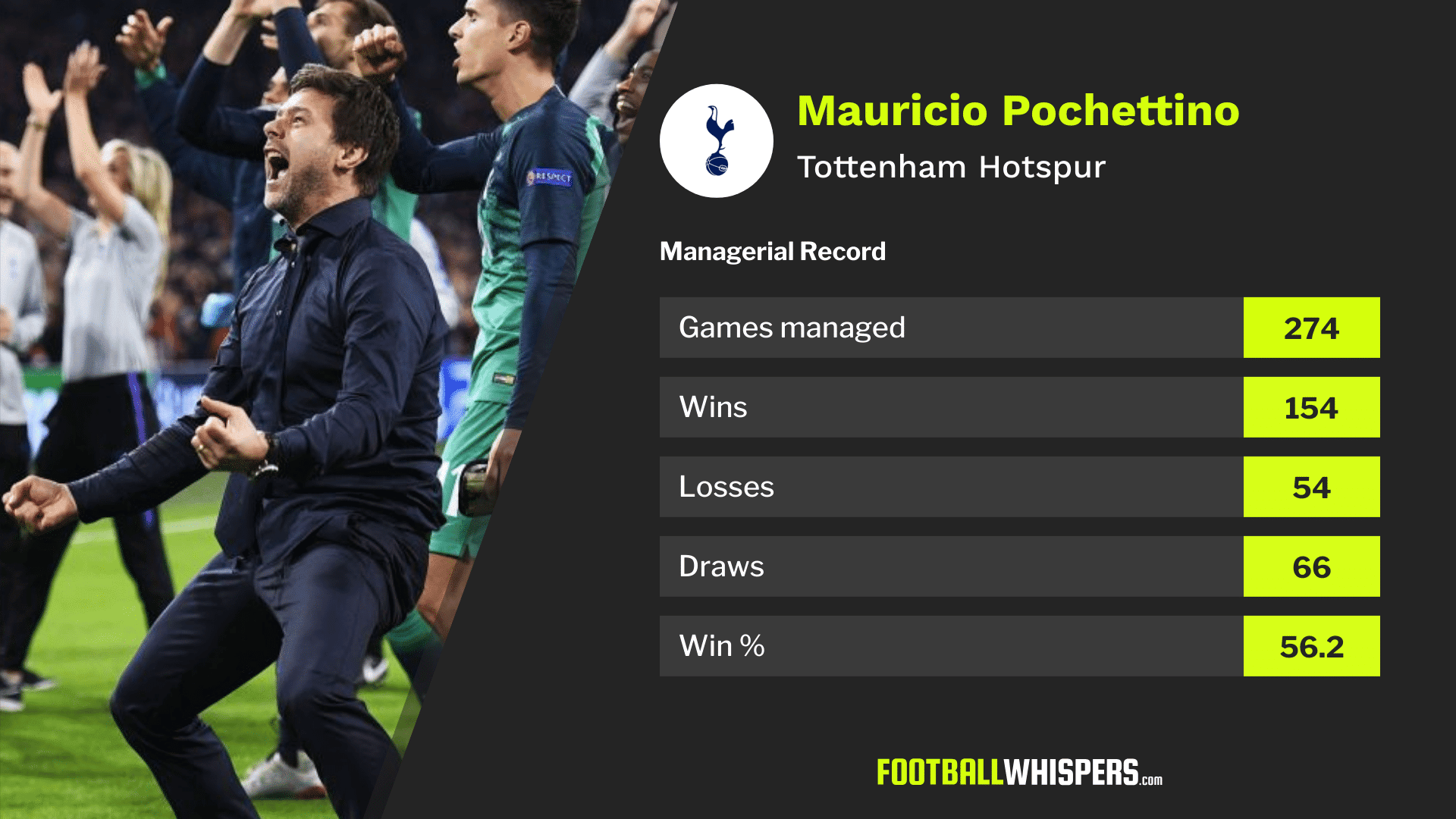 Lucas Moura, the last new arrival into the club, signed from Paris Saint-Germain way back in January 2018, was the hero on the night, providing thrust, penetration and all three goals. But if this triumph was the work of one man, Pochettino was unquestionably its architect.

In the tactical context of the comeback against Ajax, Spurs strayed from what has taken them so far in the last five years.

Outplayed for the first 135 minutes of the tie, their customary high-pressing, short-passing, line-slicing style was eschewed for a more direct approach; rather than continue to fight a midfield battle they were unlikely to win, Tottenham bypassed the middle of the park altogether, time and again going long to target man Fernando Llorente, a second-half substitute, and allowing Moura, Son Heung-min and Dele Alli to scrap for second balls.

Evidently, as Llorente won 13 aerial duels and Moura hit three goals, it worked. But while pragmatic tactics aided Spurs' recovery, as coy as it may sound, their place in the Champions League final is a result of the collective spirit and will that Pochettino has fostered.

Five minutes of stoppage time had elapsed when Moura swept home to complete the unlikely turnaround, sending Tottenham through on away goals. They had ridden their luck, with the outstanding Hakim Ziyech twice threatening to double his personal tally for the evening and put the tie beyond the visitors.

Heads momentarily dropped when Spurs squandered what looked likely to be their last attack, deep into added time. But through their refusal to quit, their yearning to manifest one more opportunity, they fought on. And when their chance came, Moura was precise.

With the last-minute, VAR-denied Raheem Sterling goal at the Etihad, and now the latest of late winners against Ajax, Tottenham's Champions League run has swung on split-seconds, emerging from the kind of blink-and-you-miss-it moments of beautiful chaos unique to football to live on.

But Tottenham's presence in the final is a victory for the slow-burners. It is vindication for Pochettino's methods, his belief that true, sustainable growth takes time. Win or lose again Liverpool at Atlético Madrid's magnificent Wanda Metropolitano stadium on June 1, though, the Champions league final should be considered Pochettino's crowning glory.

Spurs, with their positive net spent and sixth-highest wage bill in the Premier League, will again finish inside the top four, securing a return to Europe's top table for next season, and they have done so while delivering the dream cup run, in the dream cup.

Pep Guardiola has done wonderful things with Manchester City; he has spent big but, with the football they play and the titles they've won, he's delivered big. And the way Klopp has rebuilt Liverpool into a force feared around Europe deserves immense credit.

But Pochettino now demands equal billing. He belongs in the highest echelon of the game's elite managers.

Almost five years into his time in charge of Spurs, as many of his critics have revelled in pointing out, he has not yet claimed a trophy. Some said he'd have to go to Spain, to Madrid, to fulfil his ambition of competing for Europe's biggest prizes.

In three weeks' time he'll do just that, but he'll be taking Tottenham with him.