“Complacency” and “arrogance” were the words Mauricio Pochettino used. Tottenham Hotspur, having led Southampton 1-0 thanks to Harry Kane’s opener, had thrown it away. They conceded twice in the final 15 minutes and fell to a third defeat in four Premier League games.

From title challengers little over a month ago, Spurs are now facing a battle to hold onto third place. When Pochettino’s side beat Leicester 3-1 in mid-February, they were just five points off leaders Manchester City and ten ahead of Arsenal. Now, they are 13 points off the top and lead their North London rivals by a solitary point.

It will be difficult for Pochettino to assess what has happened. His side, from a comfortable position in the top three, have dropped off dramatically.

It began with a narrow defeat at Burnley, which was immediately followed up by a loss against Chelsea. Spurs had a chance to bounce back in the North London derby but struggled to a 1-1 draw at home against Arsenal, who might have won it had Pierre-Emerick Aubameyang not missed a late penalty.

And then came the defeat at St Mary’s. “It is so difficult to understand the way we played the second half,” Pochettino said. “We showed a lack of hunger that you need to kill the game and if you want to be a contender, to fight for things, you cannot play like this. I am worried about the way we changed from the first half to the second half and the only reason for this is complacency and arrogance.”

The Argentine coach would have been forgiven for feeling bemused, especially given his side’s impressive 1-0 win at Borussia Dortmund in their Champions League last 16 second leg just a few days before.

In the Premier League, though, Tottenham appear fatigued, short of their usual energy. And they have lacked the tactical maturity to get through a difficult, and busy, period of the season. Profligacy, naïve defending and poor game management has cost them dearly.

During this run of four games, in which Spurs have picked up just one point from a possible 12, Pochettino’s side have shipped seven goals. Their xG conceded per 90 has risen from a season average of 1.37 to 1.56.

There are similar issues at the other end of the pitch, too. Tottenham have found the net just three times – all scored by Harry Kane – in their last four league games. Their xG per 90 has dropped from 1.6 to 1.06, better only than Brighton, Fulham, Huddersfield and Everton during the same time period.

Clearly, then, Pochettino has work to do both defensively and offensively during the international break. He must attempt to stamp out the individual errors that have proved so costly at the back and find a way of supporting Kane, who has cut a lonely figure in attack of late.

None of these issues are likely to be terminal. Spurs, even during this dismal run, have shown glimpses of their quality. They were dominant in the first half against Southampton before lapses in concentration and discipline allowed the hosts back into the game. And winning both legs against Borussia Dortmund was impressive. Now, though, they cannot afford many more slip-ups. 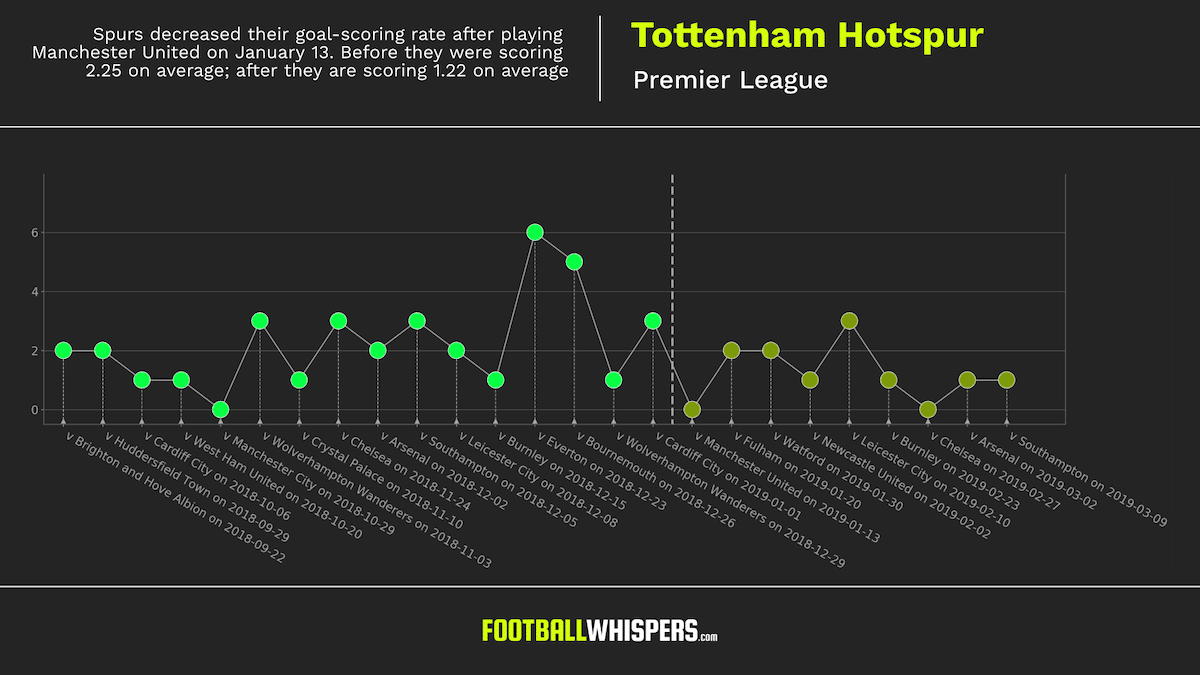 “The problem is, in the Premier League, if you let your opponent in the game you never know what to expect or never know what can happen,” captain Hugo Lloris said after the Southampton defeat. “You need to kill the game and go and score the second goal and get a third because you cannot switch off. At the moment, we do not have the capacity to manage the games.”

With his side out of the FA Cup, Pochettino now has over two weeks to contemplate things, to fix the issues that are threatening to derail what has been, up to now, another excellent season. A prolonged break could be the best possible thing for Spurs; it will allow them to recharge the batteries, work on improvements and restart.

A top-four finish and reaching the latter stages of the Champions League would still represent a positive campaign for Tottenham. The recent run of defeats has been a dose of reality, though, and might quell expectations at the club.

For Spurs and Pochettino, there is still plenty of work to do.