Mauricio Pochettino is rightly revered as one of the most astute managerial minds in the Premier League. Working to a tight budget, the Argentine has established Tottenham Hotspur as genuine title contenders in the last two seasons and, with 17 points from their opening eight games, it looks as though this season could be the same story.

However, even the most impressive managers have their bogey sides. Pochettino's is Liverpool. Since being appointed Spurs boss in 2014, he has failed to win in seven games against the Reds, with three draws and four defeats (six games in the league, one in the EFL Cup).

On Sunday, he will lead his Spurs side out looking to end that hoodoo.

Pochettino's reputation as a shrewd tactical mastermind was given a ringing endorsement midweek when he went to the Santiago Bernabeu and drew 1-1 with Real Madrid. On the surface, a point looks relatively unremarkable, but it was a performance and result made possible by Pochettino's savvy tactical flexibility.

The 45-year-old played a back-three, but it was surprising to see Eric Dier at the heart of it, with Jan Vertonghen shifted to left wing-back. He also handed Fernando Llorente just his second start since joining from Swansea City in the summer, shining up top alongside Harry Kane in a 3-5-2.

After the game, Pochettino looked pleased with himself.

“I knew you would be surprised about the starting XI,” he quipped. “But it’s important to surprise our opponent, to be flexible, to have different ways to play. We can play three or four at the back, one or two strikers, two or three [central] midfielders.”

This high-functioning tactical nous and capacity to be unpredictable in the construction and structure of his team is a hugely beneficial attribute for Pochettino. However, while national newspapers were willing to hail his ‘tactical masterclass' against the European champions, he must learn from past mistakes to end his barren record against Liverpool.

HIGH LINE IS A NO-GO

When Spurs travelled to Anfield in February, Liverpool were hurting after a five-game winless run. The North London club, in contrast, were looking to stretch their unbeaten sequence to ten matches.

However, deploying an exceptionally risky high defensive line, Spurs were on the receiving end of a Sadio Mané blitz, the Senegal international bagging a brace in the space of 138 seconds to effectively end their rivals' chances.

Shaping up in a 4-2-3-1 with a back four of Kyle Walker, Toby Alderweireld, Dier and Ben Davies, Spurs played straight into Liverpool's hands by pushing high up the pitch and leaving tons of space for Mané in behind.

There were two early warning signs. In the two screenshots below, you can see how high Spurs' defenders are. In the second one, Roberto Firmino is pointing into the space left while Mané is making a direct run between Davies and Dier.

Although neither of those particular attacks damaged Spurs, they were an ominous sign of what was to come. 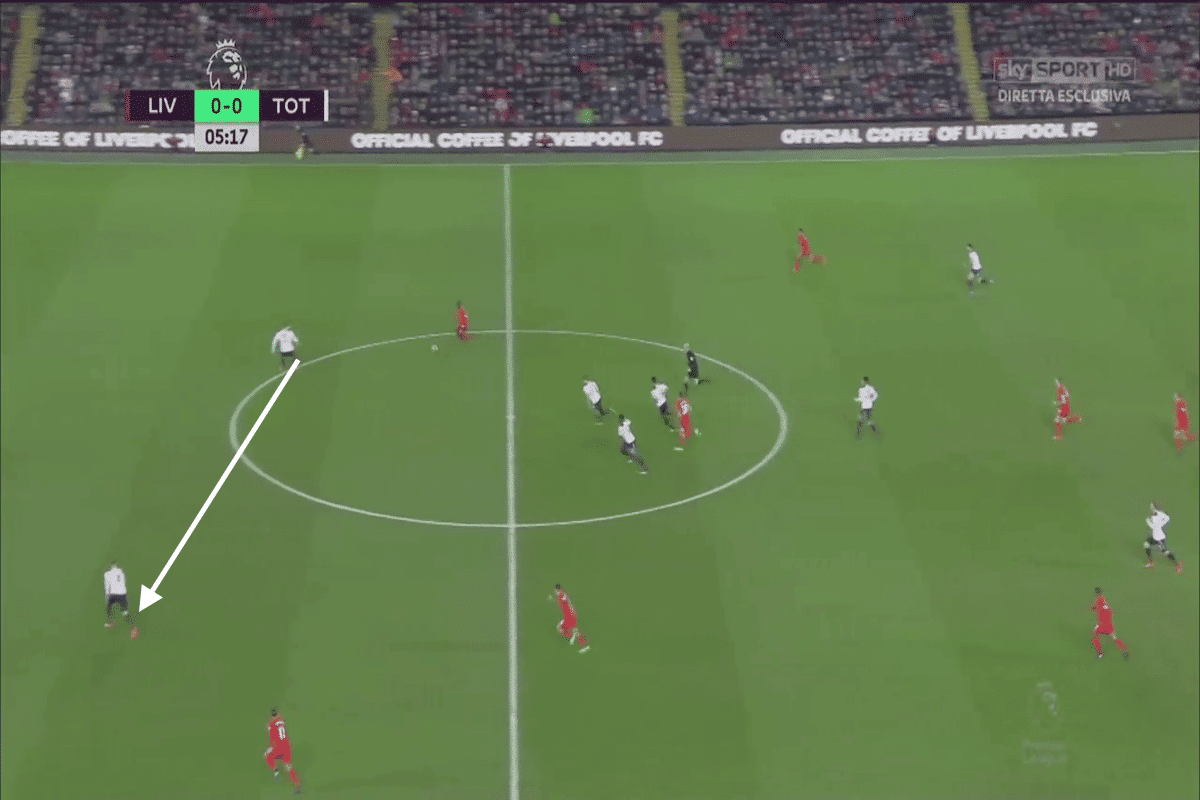 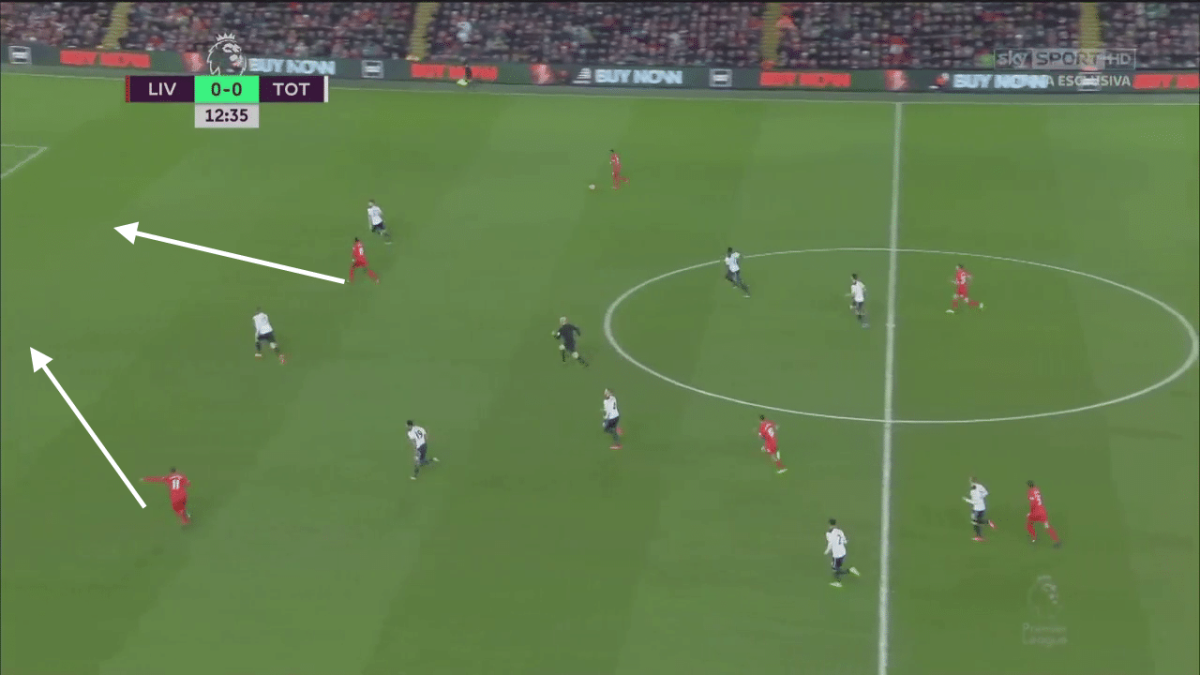 Below is Mané's first goal. Victor Wanyama is caught in possession by Philippe Coutinho and Georginio Wijnaldum is quick to spot a run by Mané. Spurs' high-line doesn't stand a chance. With Mané's electric pace, he zooms past Dier, runs through and lifts the ball over Hugo Lloris. 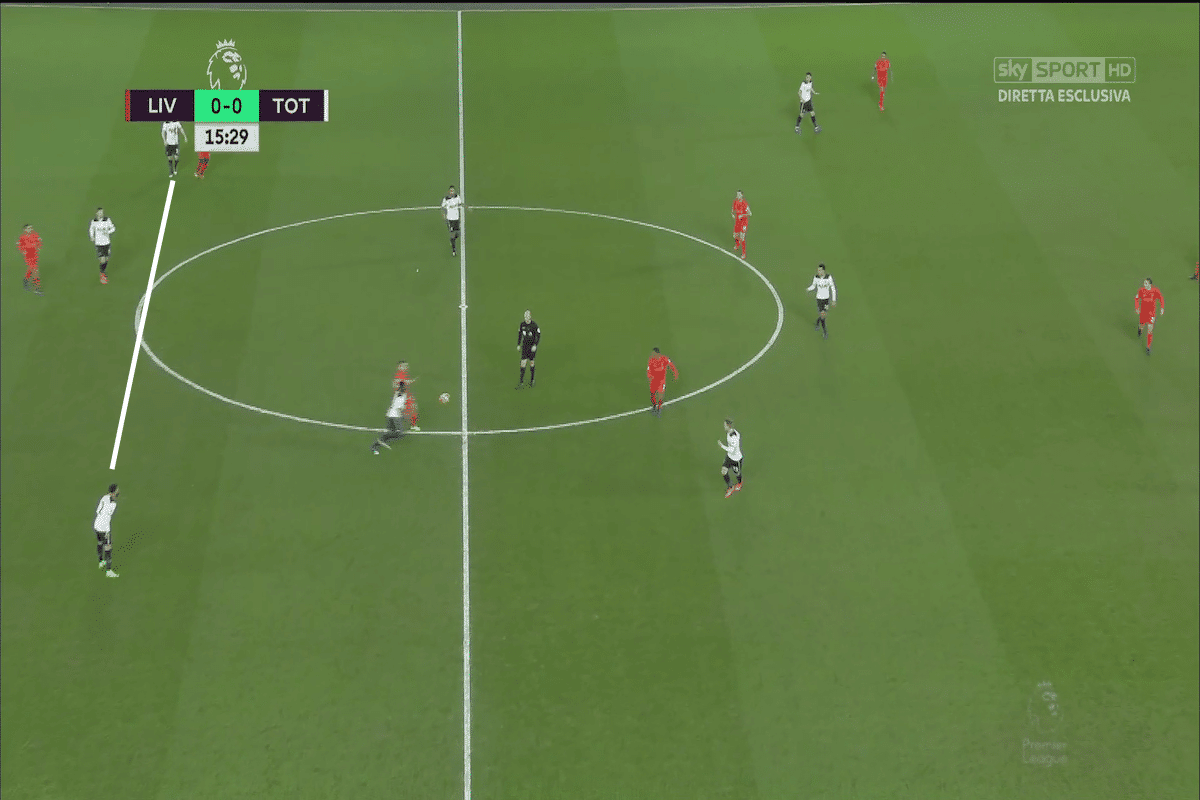 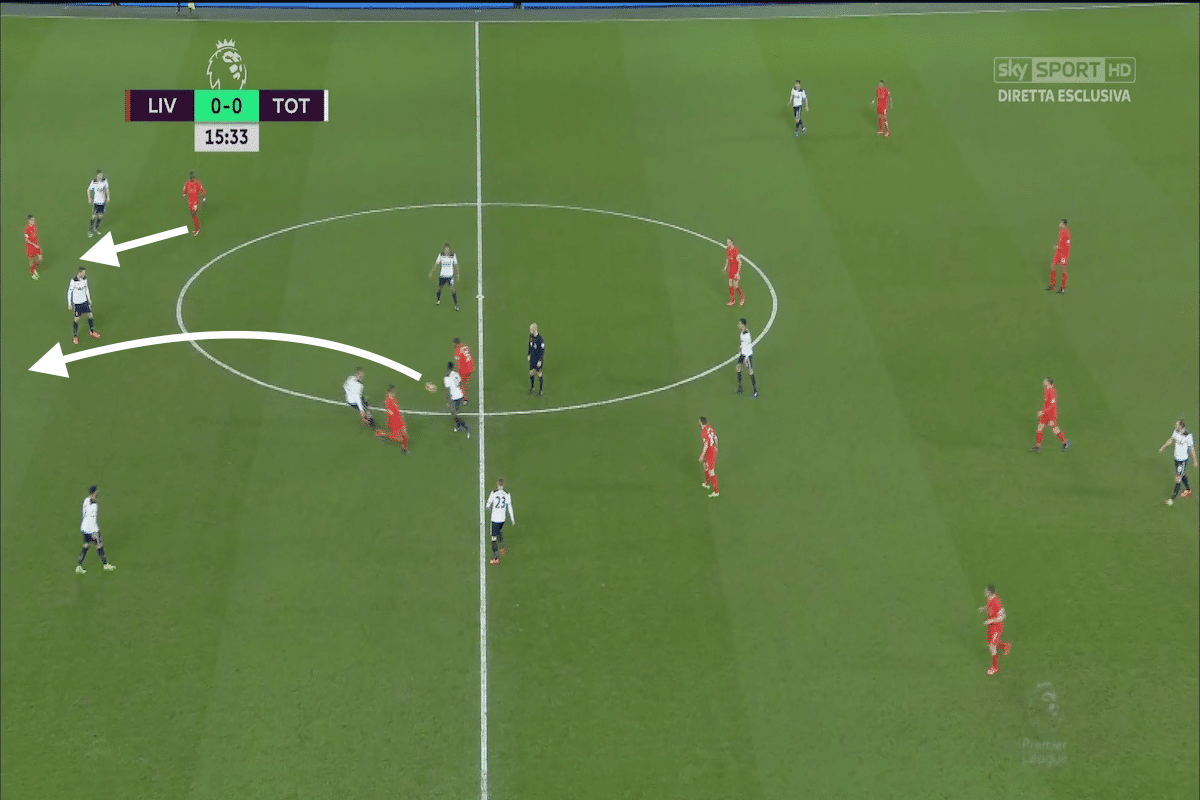 But Spurs failed to heed the warning. Just two minutes later, Mané caught Dier in possession and sped off once again. He squared it to Coutinho, whose shot was saved. Firmino tried and failed before Mané fired home his second. But look below: once Mané got a toe to the ball and set off, Spurs were in deep trouble with no cover. Liverpool and Klopp probably couldn't believe the amount of space left in behind Dier. The Reds had ended the contest after just 18 minutes. 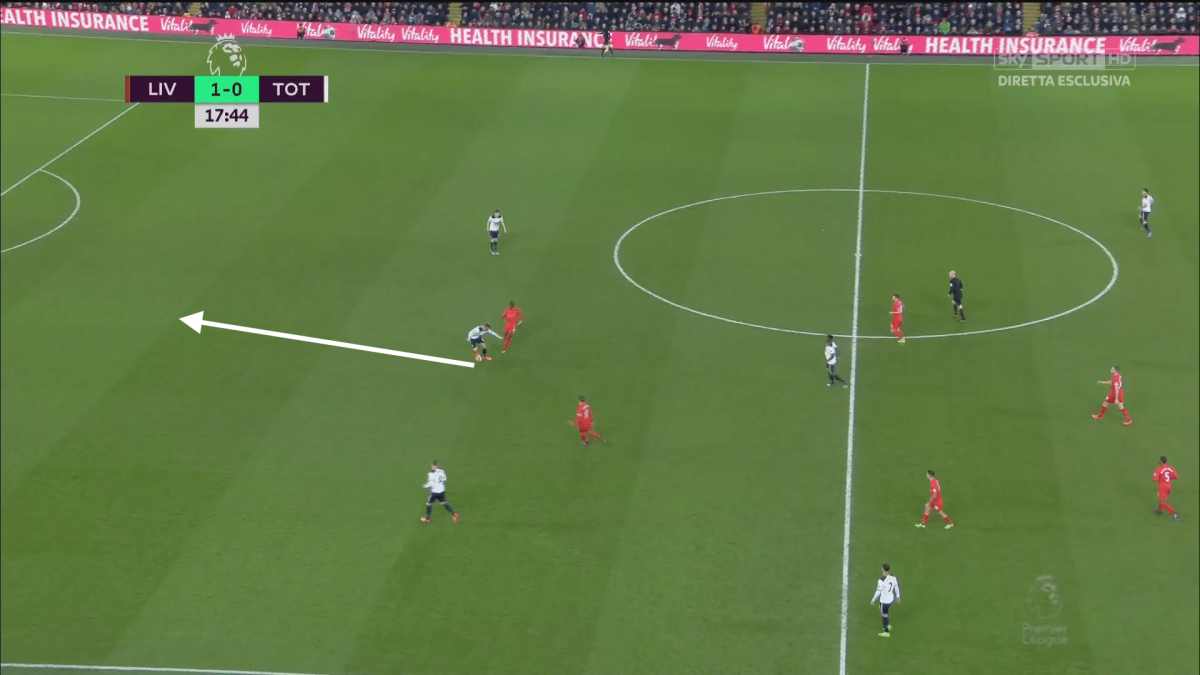 Deciding to go with such a high defensive line, especially when the deep defences of Sunderland, Hull City and Swansea City had shown Pochettino how to stifle and frustrate Liverpool in the weeks leading up to the game, was particularly bewildering.

Playing Son Heung-min at left wing-back also left Davies hideously exposed – something Liverpool specifically targeted, with 50 per cent of their attacks coming down that flank. It's possible Pochettino will recall Danny Rose to the starting line-up as Davies recovers from illness. 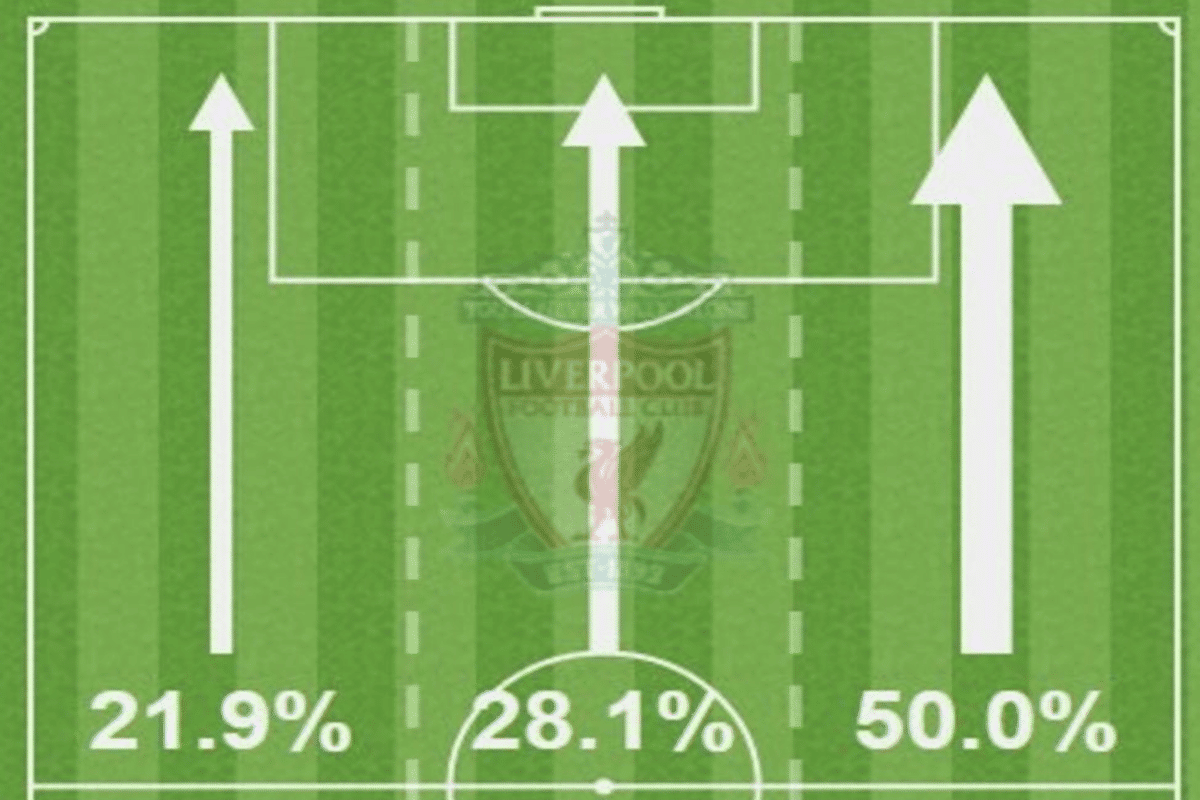 However, eight months on, there is a sense that Pochettino has matured and evolved, which was indicative in the draw against Madrid. While many will be quick to point out that Mané is injured, Liverpool still pose a significant threat on the counter and will look to hurt Spurs with runners in behind, most likely Mohamed Salah and Firmino.

Davinson Sánchez will be one of the most effective players Spurs have to stop Liverpool doing the same number on them again. The 21-year-old Colombian has slotted seamlessly into Spurs' defence since signing from Ajax in the summer and did not look out of place while he kept a close eye on Cristiano Ronaldo and Karim Benzema at the Bernabeu.

Sánchez has impressed Pochettino with his speed of thought, making quick recoveries on the cover when Spurs are pushed back. His decisiveness on the cover is something that was missing at Anfield last season.

Sánchez has been dribbled past only four times in the Premier League this season and, although he will come up against the likes of Salah and Coutinho – two of the league's most devastating dribblers – Spurs will bank on his strengths to keep the defence tight.

Pochettino's defenders have looked comfortable this season with Sánchez as the deepest in a back three and Vertonghen and Alderweireld slightly ahead of him. Having the Colombian's positional sense and speed will certainly be key to stopping Liverpool finding any space in behind.

Spurs defended deeply against Madrid – they were forced to, in fairness – but they looked compact and organised because of it. Replicating the same structure will give them a great chance of frustrating Liverpool and finally getting the better of the Reds this weekend. If anything, it's going to be another fascinating assessment of Pochettino's tactical versatility.