Plymouth are far from formidable at home but our first prediction is backing them to win on Friday. Wimbledon have only managed two wins in their last 10 matches with just one in the past five. Plymouth have managed to win three of their last five at Home Park. They boast a decent record over their opponents too having lost just one of the last six meetings between the pair.

Both teams not to score

The next of our tips is far from nailed on with form in the BTTS market fluctuating somewhat for both sides. Still, the scales tilt in favour of the ‘no' answer hence our prediction. Both the home and away side have seen six of their past 10 matches end with a zero in the score line. A more targeted look pulls us to the respective home and away form. Plymouth have only seen one of their last five home matches end where both teams scored. Only two of Wimbledon's prior five have seen either side blank though. That said, their last three matches have only yielded four goals so they're hardly flying in from every angle.

To say 24-year-old Ryan Hardie hasn't been pulling up trees this season would be an understatement. He's only netted four goals all season. With that in mind, this prediction is somewhat best described as an outside bet. Hardie's goal return is not a completely fair reflection of things though; the striker has been struggling for game time over the past couple of months. He was afforded a rare start at Blackpool last time out though and staked his claim with a goal. The comments from Ryan Lowe after the game indicated he'll get another crack from the off against Wimbledon; the words came with a warning though – he expects more of the same from Hardie.

All the stats and odds for Plymouth vs Wimbledon

Wimbledon's mini run to be ended by Plymouth

Plymouth had been on a woeful run just a week or so ago but a home win over Bristol Rovers and a hard fought point at Blackpool has them back on track and 13 points above the drop zone. They are in no danger of going down but another win against a Wimbledon side who are well and truly in the thick of it will put even more distance between the sides. Wimbledon have been on a reasonable run themselves with three draws and a win in their last four; that's given them a platform to build on in their scrap to stay up. Their big trouble is scoring goals though and they may well need to dust themselves off to go again after Friday.

FAQ about Plymouth vs Wimbledon 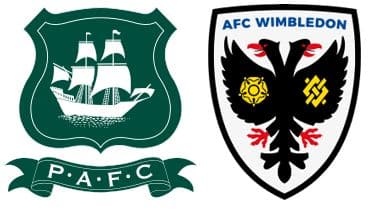