Watching young strikers develop in Ligue 1, you see patterns emerge and it’s almost as if they go through an apprenticeship.

Nice forward Alassane Pléa is no different, but now the 25-year-old is ready for the next stage of his career. Alexandre Lacazette graduated through the process at Lyon, Pierre-Emerick Aubameyang couldn’t escape it while at Saint-Etienne and Kylian Mbappé is doing it now.

Starting as a wide forward, all these talented youngsters had to earn their stripes, learn the position and impress, before continuing their development and becoming very talented centre-forwards. The same is true of Pléa.

A graduate of the famous Lyon youth system, although born in Lille, he was snapped up and joined OL when he was 16 years old. But it never quite worked out and he only managed six league appearances at the Stade Gerland.

When he made his Ligue 1 debut in 2013 as a substitute against Lorient, he came on to play with Lacazette, but it was ultimately the Arsenal forward who was the star prospect of Les Gones and Pléa would need to move on.

Now, playing in his fourth season with Nice, it seems he is ready for his next adventure. According to L’Equipe, the former France youth international is being watched by both Leicester City and West Ham United, with the former sitting as early favourites as his former boss Claude Puel is currently in charge at the King Power Stadium.

“I’ve always said, a foreign league is something that attracts me,” he told French radio station RMC. “One day, I hope to go, see a different country, witness a different football culture, learn a new language. I would really like that.

“For now, I have important steps to take. It’s my fourth season with Nice. I hope to have a full season. Injuries stopped my progress. Then, we’ll see. If one day I have a super club, we’ll see if it’s possible.”

When he arrived in the south of France, les Aiglons had Argentinean striker Darío Cvitanich leading the line. He had just come off a 19-goal season and there were high hopes Pléa would complement the more experienced forward.

Finishing with three goals, he added seven assists and split his time playing both wide and through the middle. And, come his second campaign, it was expected he would take over the role as the main striker and continue his development.

After six games of the 2015/16 season, Puel’s plan was working; with two goals and two assists, his young striker was beginning to impress. Then disaster struck.

A knee injury was diagnosed as a ruptured cruciate ligament and he wouldn't return to the pitch until February. However, scoring another four, including two on the final day, suggested there wouldn’t be any long-term issues in his recovery.

Mario Balotelli would arrive in the summer of 2016, but new boss Lucien Favre found a way to combine the two and changed Nice from a team playing 4-3-3 to 3-5-2. Width would come from the wing-backs and allow Pléa to combine with the Italian, without losing bodies through the middle.

It worked beautifully, and you could see the then 24-year-old learning from the new No.9. Often, the former Liverpool and Milan forward would be pointing, gesturing, telling the Frenchman where to go. And then when Balotelli couldn’t play, it was left to Pléa to fill the role as the attack's focal point.

Going into February 2017, he had scored 11 league goals, his best return to date and there was talk of a potential France call-up.

However, taking on Rennes in Brittany, he would go down after a tangle of legs and the Nice forward would come off worse. Ruled out with a tear of the meniscus, he would miss the rest of the season and the joy of helping guide his team to a fantastic third-place finish.

This term, although he’s taken a back-stage role as Nice and Balotelli tried to recover from a slow start in the league – hampered by their attempts to qualify for the Champions League group stage – Pléa is back on form and following his four-goal haul against Guingamp, he is up to ten league goals and 15 in all competitions.

Ten of his appearances have come off the left flank, but the majority, even though Favre has gone back to 4-3-3, have come through the middle.

What would Pléa bring to England?

His stunning performance against Guingamp, finding the net four times in a 5-2 victory, almost showcased perfectly what he brings to the attack. T

he first goal came on the counter, something he would need to show for both Leicester and the Hammers, playing off the last shoulder, he has enough pace to keep the defenders off his tail and then showed composure and confidence to place the shot beyond the keeper with his weaker left foot.

Just after the half-time break, he drifted down the left channel, timed his run beautifully to take Allan Saint-Maximin’s pass on his chest, taking out the right-back. He then dropped a shoulder, glided past the next defender before finding the bottom corner.

Using Football Whispers unique data lab, we understand Pléa’s style is similar to Antoine Griezmann and Lacazette, but he completes more take-ons than both the French strikers, using his skill on the ball to cut inside and leave opponents scrambling to recover. 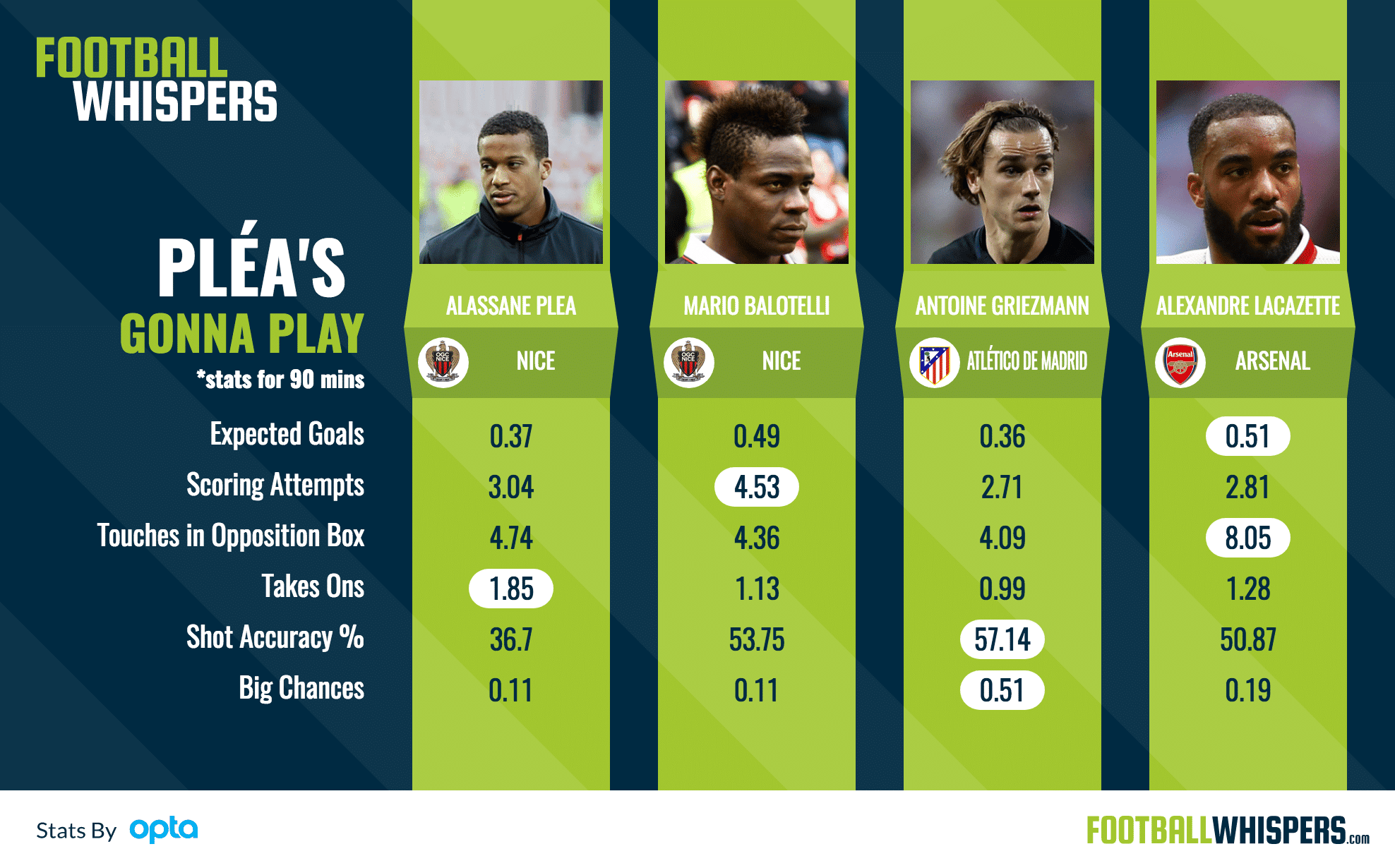 Up against Nice team-mate Balotelli, he makes more accurate passes and has more touches of the ball inside the opposition box. The Italian edges him in terms of Expected Goals per 90, shooting accuracy and scoring attempts, but he is the main striker at the club.

However, Pléa does come out on top when compared against Griezmann and Lacazette. His xG per 90 of 0.37 is higher than the Atletico Madrid forward and he averages more scoring attempts than both.

For his hat-trick against EAG, the 25-year-old made a positive run across the centre-back and received the ball with his back to goal. He held off the defender before pulling out an unexpected shot from a tight angle to squeeze the ball past goalkeeper Karl-Johan Johnsson.

Into injury time, he would add his fourth, but this time he started the move. Feeding a forward pass to Bassem Srarfi, he followed it up with a run down the outside – similar to the link-up play Lacazette has shown throughout his career – looking to get the ball back. He did, taking a touch to create a yard of pace he then fired a low shot into the far corner.

A wonderful example of everything he does well, all condensed into a magical 90 minutes.

Would he adapt to life in the Premier League?

Outside of the top six, no club in England dominates possession like Nice are able to do in France, so there would obviously be a period of adjustment. According to the Football Whispers data lab, this season, the Ligue 1 side average 14.45 seconds on the ball per possession, compared to the 9.05 and 9.08 seconds from West Ham and Leicester respectively.

Nice are a more patient side, their passes cover more ground with each bout of possession, up at 90.63 metres, with the English sides both around the 58-metre mark. Favre’s team compare similarly to the style of both Arsenal and Manchester City, with their passes covering 90.14 and 109.38 metres. A

lthough he wants a ‘super club’ it’s unlikely either side would be interested in signing Pléa, so he would have to contend with a Premier League club slightly down the ladder, if England is his preferred destination.

He’s shown enough on the counter to suggest he could adapt to the more direct approach both Leicester and West Ham take. Although his shot accuracy is down at 36.7 per cent and he’s not as quick, he can make runs off the last defender like Jamie Vardy, and could be a worthy alternative to the England forward.

For the Hammers, there are elements of his game reminiscent of Diafra Sakho, although Pléa is much more the polished article than the former Metz youngster was when he arrived in East London.

He’s not a poacher like Chicharito and he would give a more clinical edge than Marko Arnautovic, which makes him the ideal summer signing.

Although he has followed the path as both Lacazette and Aubameyang in order to blossom into a talented centre-forward, there’s no guarantee he would be able to reach the same heights as those two strikers. But there’s little doubt, with 30 goals in 111 Ligue 1 appearances, he is ready for the next step.