As debuts go, few can have been as a disastrous as Orestis Karnezis‘ first outing in Watford colours.

With an hour gone, the Hornets were leading Everton 2-0 at Goodison Park in November when the Greek international was brought on in place of the injured Heurelho Gomes. The perfect scenario, or so it seemed.

But the 32-year-old gifted the Toffees two goals, paving the way for David Unsworth's side to pick up a much-needed win and kickstarting a dismal run of form for the Hertfordshire side.

So Watford fans could be forgiven, then, for any trepidation when the Udinese loanee was handed his first start away at Leicester City in Marco Silva's final game in charge.

The 2-0 defeat had dire consequences for the Portuguese coach, but his goalkeeper came through unscathed.

“It is not my first year. I have a lot of experience,” Karnezis told the Hertfordshire Mercury in response to those who doubted him.

“I have played more than three or four years in Italy, also one year in Spain. I have more than 50 games with the national team. I played in the World Cup in Brazil.

“I’m very proud and happy with the work I have made until now. They didn’t call me one day and say come to the Premier League [out of nowhere], it’s not like this, football. Everybody has their own background.”

Karnezis has been ever present for Watford in the seven games since and has held his place in the side despite Gomes' return to fitness.

Gomes will probably be remembered by Premier League fans as a comedy character following his haphazard start to life at Tottenham. But Spurs fans will say the former PSV Eindhoven stopper got over that phase before long and turned into a solid top-flight keeper.

And the Brazilian has been exactly that at Vicarage Road, bailing the Hornets out on numerous occasions as well as being named Player of the Year in 2016 – Watford's first season back in the top flight. He is also one of the biggest influences in the Hornets' multinational dressing room.

On Sunday there was a new twist when Gomes was left out of the match-day 18 in favour of Austrian youngster Daniel Bachmann. Watford tweeted prior to the game to say the Brazilian had been left out due to personal reasons.

But Gomes refuted that afterwards by tweeting: “Just to clarify why I wasn’t involved today, just because people started to ask me, there wasn’t no personal reason, it was the manager decision, really don’t know why, we never had a problem but I need to respect it.”

So where does that leave Gomes in the battle to be Watford's No.1?

The stats aren't so kind on Gomes. Since their promotion to the Premier League the Hornets have conceded 19 more goals than their xGA total. Only Liverpool's record is worse. Though he's something of a cult hero, it wouldn't be too difficult to find an upgrade on him between the sticks.

At 37 it is clear the former Selecão international cannot go on forever and a succession plan must be sought. Silva did not appear sold on the veteran stopper upon his arrival at Watford, trying and failing to sign Juventus back-up keeper Neto last summer.

Previously Gomes would have been reinstated as soon as he was fit. But under new head coach Javi Gracia it is unclear who is No.1. The slate has evidently been wiped clean with outcast Stefano Okaka brought in from the cold since the Spaniard succeeded Silva. But Karnezis has earned his run in the side.

So how do the pair compare statistically? Gomes has played considerably more minutes (2,159 to Karnezis' 662) but looking at their numbers per 90 minutes gives a fairer reflection of their efforts. 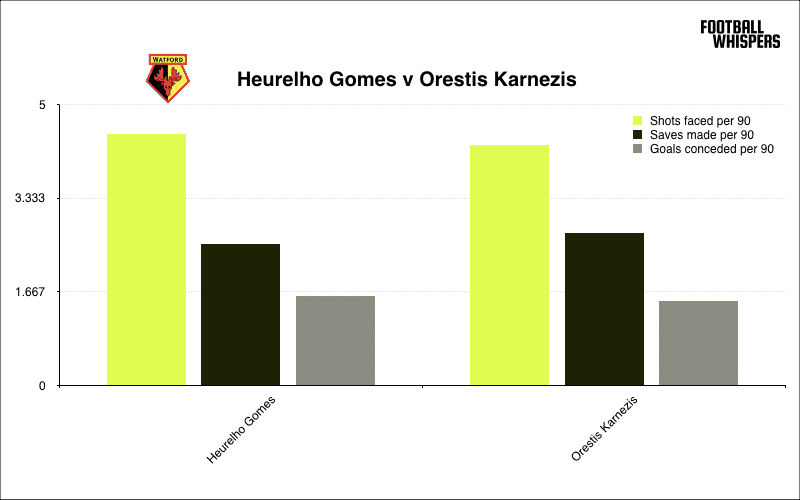 All of which suggests there is little difference between the two men vying to be Watford's number one.

One of the biggest criticisms levelled against Gomes, however, is his kicking. The former Spurs man is aware of his deficiency with his feet and will always throw the ball out given the chance, reflected in the 81 per cent accuracy of his throw outs.

That shortcoming is further reflected in his accuracy of just 56 per cent from goal kicks – seven per cent lower than Karnezis'. Overall, though, Gomes just has the edge with a combined success rate of 59 per cent this season. Karnezis is just behind on 54 per cent.

The decision, then, goes beyond who has performed better. It is about the future. Watford can secure a fourth successive season in the Premier League in the coming weeks but even before then the club's recruitment staff will be looking at where they need to strengthen in the summer transfer window.

Gomes' place will be one of those scrutinised. There is little doubt the Brazilian still has value but his successor could already have been identified in Karnezis and, owing to the fact he is on loan from Watford's sister club, completing a permanent deal would be a formality.

That would mark an impressive comeback from a dire debut at Goodison Park. First impressions can be hard to shake, but Karnezis has done just that.