Olivier Giroud was Arsenal's hero last Friday, coming off the bench to score the winning goal as they battled back for a 4-3 victory over Leicester City at the Emirates.

Their season had started strongly when Alexandre Lacazette headed past Kasper Schmeichel with just two minutes on the clock. The Lyon forward, after arriving this summer, would have been delighted to get off the mark so quickly.

Giroud has now only started 13 of his last 32 Premier League appearances. But with his scoring record off the bench so impressive, the question for Arsène Wenger is whether the two French forwards can exist together in the Gunners' attack.

Moving to 3-4-3 last season opens up a new world options for the experienced coach and he could find multiple ways to get the best out of his forwards.

With Wenger's front three don't play simply as two wide man flanking the centre-forward. There is movement and you can have a combination of playmakers, wingers, inside forwards and targetmen taking up various positions.

At times two strikers played with playmaker behind, or you can see two forwards just a little deeper than the main central option.

When Lacazette was first touted as a potential signing, Gunners fans questioned why they would pay more than £50million for someone who struggles to get in the France squad ahead of Giroud.

The simplest reason is that the big forward does a very important job for France and has a great playing relationship with Antoine Griezmann, arguably Les Bleus' best player – something that came to fore more during Euro 2016.

In the below graphic, you can see the ‘big-man little-man' partnership work flawlessly. 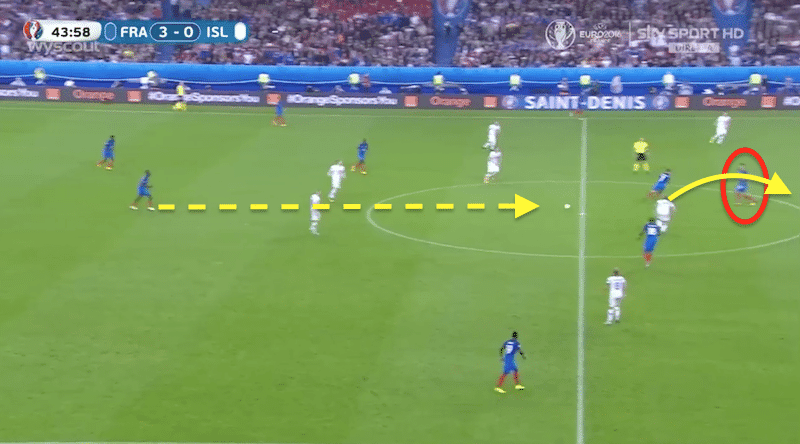 When the ball in played up towards Giroud, Griezmann knows what's coming and begins to make the run in behind before the Arsenal man is even in possession.

The former Manchester United transfer target has confidence in his team-mate, knowing he is one of the best forwards at providing a knock-on or a touch and, that if he gambles, there is a good chance the ball will come.

Giroud has dropped deep, expecting the pass and uses Griezmann's run to perfection. 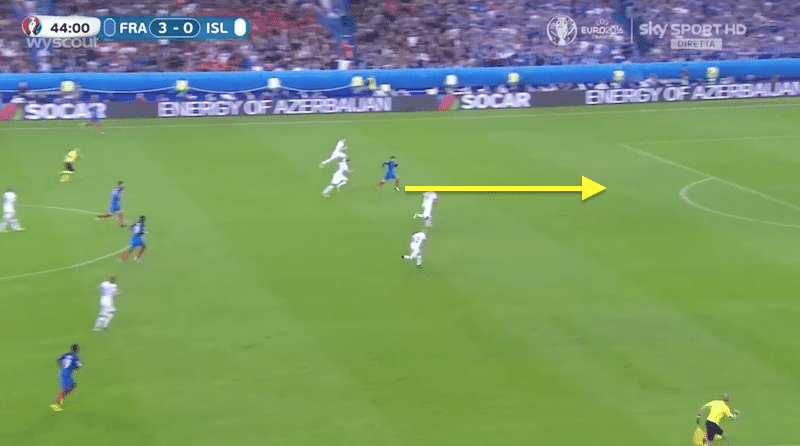 The deftests of flicks from the former Montpellier forward and his partner is through on goal. Using his speed, Griezmann gets clear and lifts the ball over the Iceland goalkeeper.

Lacazette, over the past four seasons at Lyon, has shown that he can play that same role for his team. 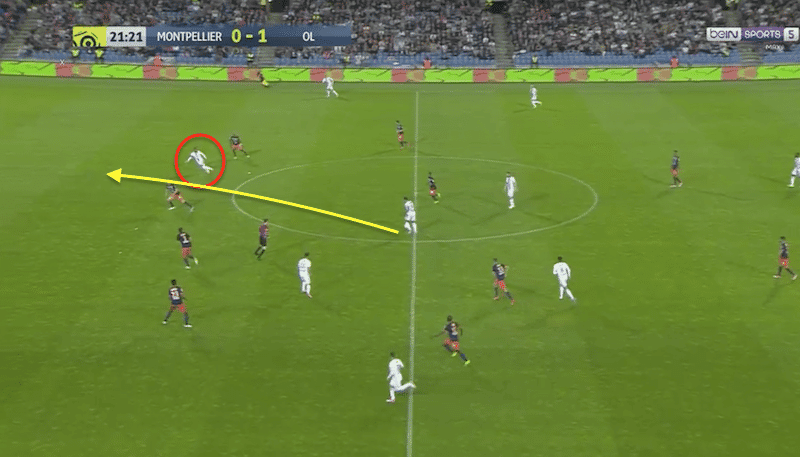 Taking on Montpellier away, Lacazette adopts the Griezmann role perfectly as soon as Memphis Depay has the ball in the middle of the park.

The 26-year-old peels off his man, gets in between the centre-back and full-back and hits the burners. 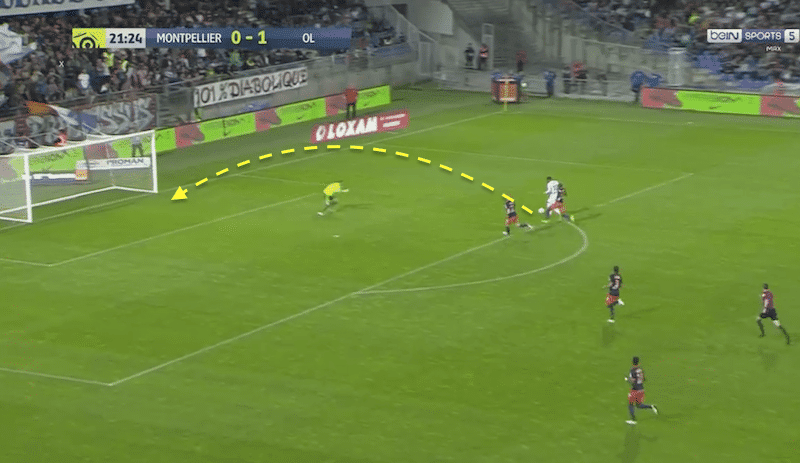 The pass is perfect – that helps – and Lacazette is through on the keeper. Like the Atlético Madrid forward he lifts the ball over him and into the back of the net.

In truth, Lacazette can actually play both the roles in the traditional big man little man partnership. He can come deep looking for the ball and has great touch and vision to pick out team-mates.

He did it over and over during the 2015/16 Ligue 1 campaign. Playing beside the younger, less experienced Rachid Ghezzal and Maxwell Cornet, Lacazette was the focal point and their little triangles around the penalty area became a feature of the OL attack.

If the situation arose, you could play Lacazette as the centre-forward and have Theo Walcott, Alex Iwobi or Danny Welbeck playing off his hold-up play. Yet, it's the combination of Lacazette and Giroud that could be the surprise of the season.

Previously a Marseille and Everton transfer target, it seems Giroud is happy to stay at the Emirates, something that has pleased his coach.

“It’s fantastic,” Wenger told the Arsenal website. “I must say I opened the door for him at some stage because I know that it’s important for him to play, but I don’t want him to go and in the end he decided to stay.

“It was one of the days of recent weeks for me because I know how important he is, not only as a player, he is a fantastic player, but as well in the group.

“He has a big weight in the squad and it was a relief for me that he decided to stay.”

With his departure described as a ‘determined no', not only will he be a feature of the Arsenal team, but there is a chance they will be able to combine on a more regular basis.

Arsenal face Stoke City at the bet365 Stadiun on Saturday and pairing Giroud with Lacazette could be exactly what's needed to combat Mark Hughes' imposing back-line.

The Gunners were 3-2 down when Giroud came off the bench against the Foxes in their Premier League opener. As you can see from the image below, Lacazette moved out wide left. This is a good natural fit for him. For Lyon, he would often drift to that side when playing in a front two. 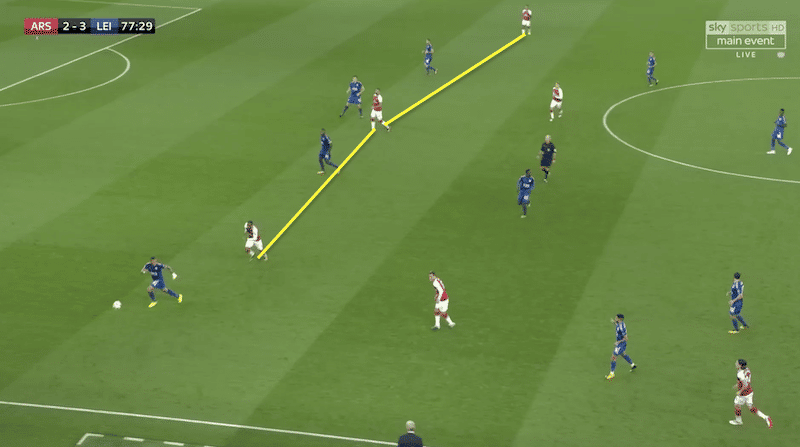 Yet, when the ball was wide on the right with Walcott, you can see Arsenal have two strikers pushing into the box, looking to get on the end of the cross. 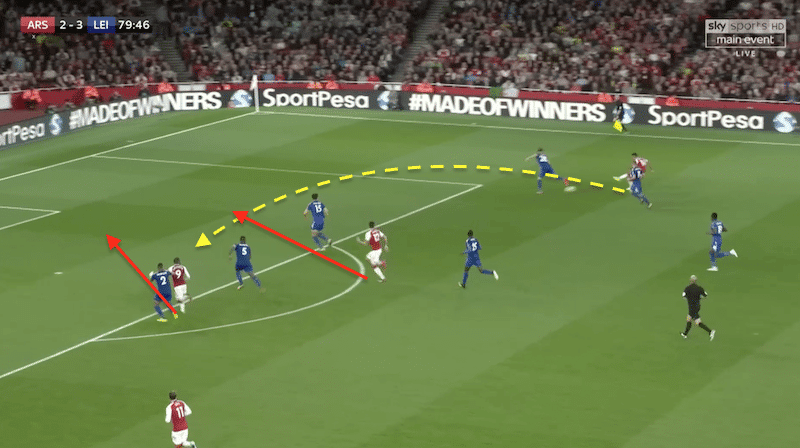 Too often, that's been missing from their attack; players happy with maintaining possession on the outside the box, not pushing up to challenge the defenders.

One thing that Lacazette did well in the 23 minutes Giroud was on the pitch was the make sure to take up smart positions around the targetman. 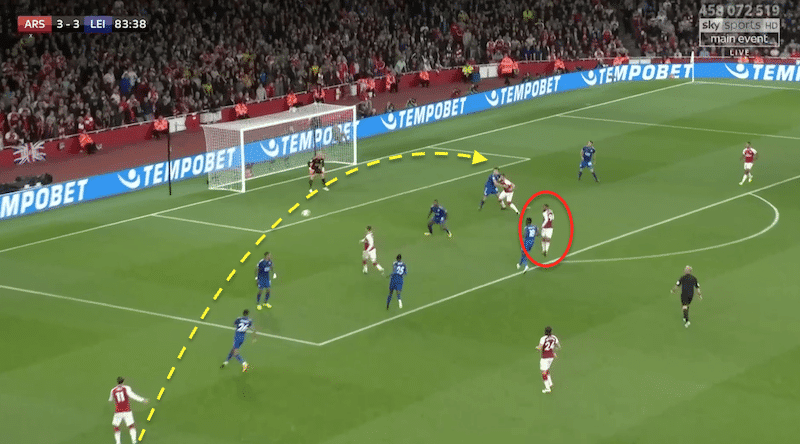 Rather than chase the same ball, or get in Giroud's way, Arsenal's record signing constantly looked to play off the big man, similar to Griezmann.

The 26-year-old drifted into the spaces Giroud left, looking for a flick or a knock-down. With six minutes left, it worked. 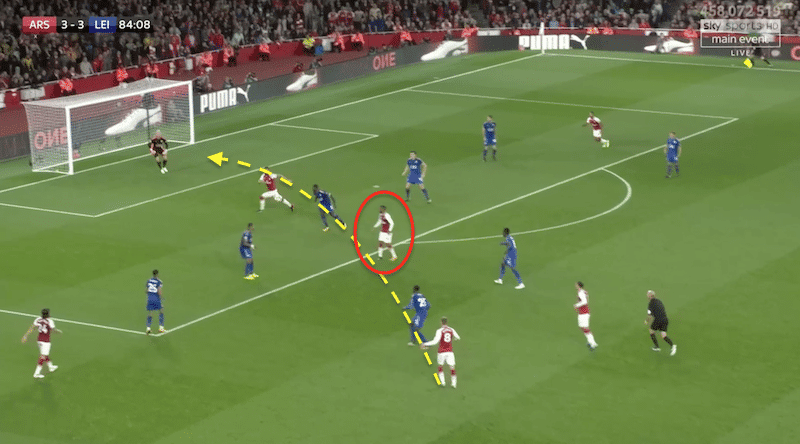 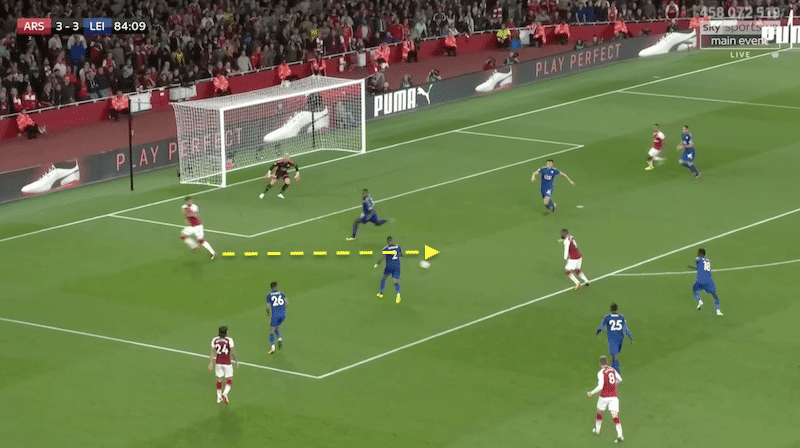 Aaron Ramsey played in a cross from the left after spotting the cross goal run from Giroud. With the two defenders sucked towards the ball Lacazette held his ground and was free to latch onto the excellent knock-down.

The former OL striker took the ball under control and worked the space to get a shot off, only to be denied by an excellent save from Schmeichel. The Dane did well to turn it over for a corner.

Then it was up to Giroud to rise above the Foxes' defenders once again and head in the winner. Although it came from the corner, it was the link-up play between the French duo that created the opportunity.

Giroud won't be happy with playing the role of back-up, or super-sub, but he has been fantastic at coming off the bench to the extent that Wenger may prefer him there.

However, just 23 minutes beside Lacazette in the Arsenal attack were enough to suggest there is the potential for a fruitful partnership.

With any other combination of attackers, Lacazette will have to play partly as a targetman. Give him the ball to feet and he can do that extremely well. Giroud offers another dimension, another angle and the type of battle that may be needed against Stoke and similar, well-organised teams.

With or without Alexis Sánchez, Wenger has a number of options in the final third who could create a good understanding with the summer signing. But if he wants to go down this route, Giroud could be the perfect foil for the Gunners' new star-striker.