There was a lot of talk surrounding Daniel Sturridge's inclusion in the England squad for Euro 2016. Despite being arguably England's best striker many pundits, journalists and fans said it was a risk to take him to France given his injury record. At the age of 26 he should be coming into his prime. His end of season run with Liverpool showed just how clinical he could be given an opportunity but still the shadow of his injury record loomed large and threatened to see him miss out on a place in the final 23.

With this in mind I decided to look at other players who have had their careers derailed by injuries and what could have been had they been more fortunate. 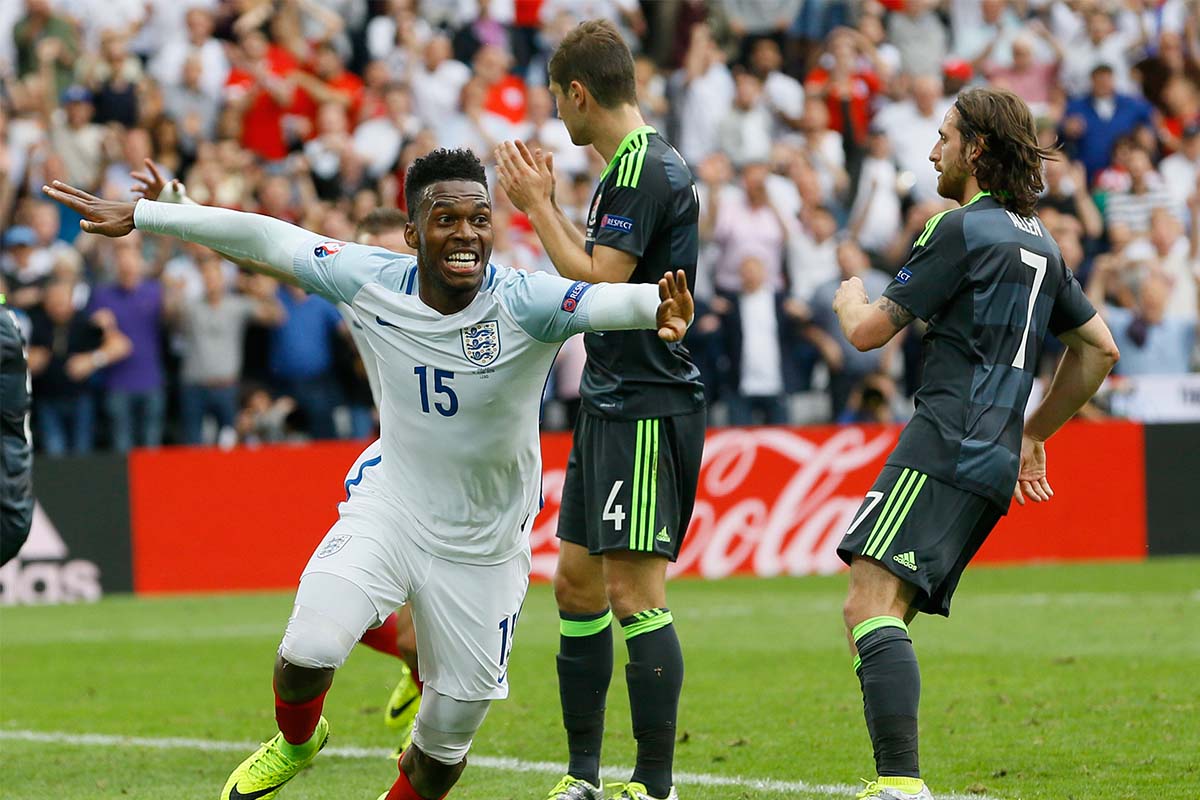 Let's start with the man who sparked the topic. Daniel Sturridge has been at Liverpool for three and a half seasons now yet has only featured in 92 matches. Having featured in 16 matches in his first half a season at Anfield it means he's played 72 matches in three seasons – around about 25 games per season in all competitions. Given Liverpool featured in Europe in two of those years that adds at least another 6 potential games to tally of matches, 44 with Premier League and Europe, and that's before even including domestic cup games. Sturridge effectively features in half the games available because of injuries.

According to Transfermarkt Sturridge has missed 75 games since signing for Liverpool. If you exclude his first half season with the Reds it means he's missed more games than he's featured in.

Imagine he hadn't picked up so many injuries.  He's scored 53 goals in 92 matches, you can't help but feel he'd be around the 100 goals mark by now and a cult hero with Liverpool fans. In his absence Liverpool lacked goals and in the past two seasons missed out on 4th place because of this. Had he been fit for the entirety there's nothing to say Liverpool wouldn't have qualified for the Champions League for the past three seasons and be a completely different club now. 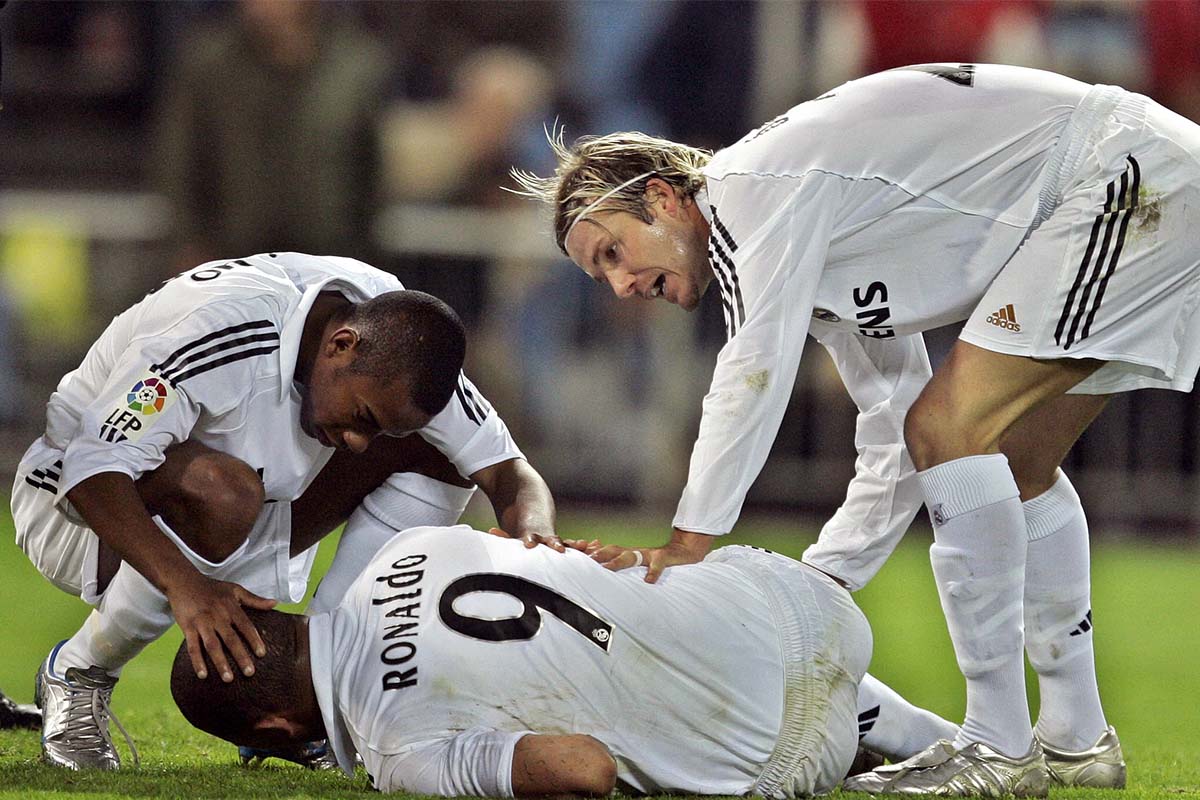 Il Fenômeno. The original. It's been five years since the mercurial talent hung his boots up for good. The ultimate number 9 scored 352 goals in 518 matches despite carrying injuries for the majority of his career. It's scary to think just how good he could have been had he managed to stay injury free.

A career that spanned 19 seasons. He failed to appear in 30 or more matches throughout the season on 8 occasions and in 4 of those he didn't even hit double figures for appearances made.

Countless honours during his career but the 1998 World Cup final will forever be a regret. It wasn't a physical injury but a seizure hours before the final saw him put in his worst performance of the tournament as Brazil lost to the host nation France.  Redemption, some may say justice, arrived four years later as he fired Brazil to a 2002 World Cup victory.

Continuous Injuries stole the world of an insanely talented striker. Upon his retirement the player had this to say –

“It's very hard to leave something that made me so happy. Mentally I wanted to continue but I have to acknowledge that I lost to my body. The head wants to go on but the body can't take any more. I think of an action but I can't do it the way I want to. It's time to go” 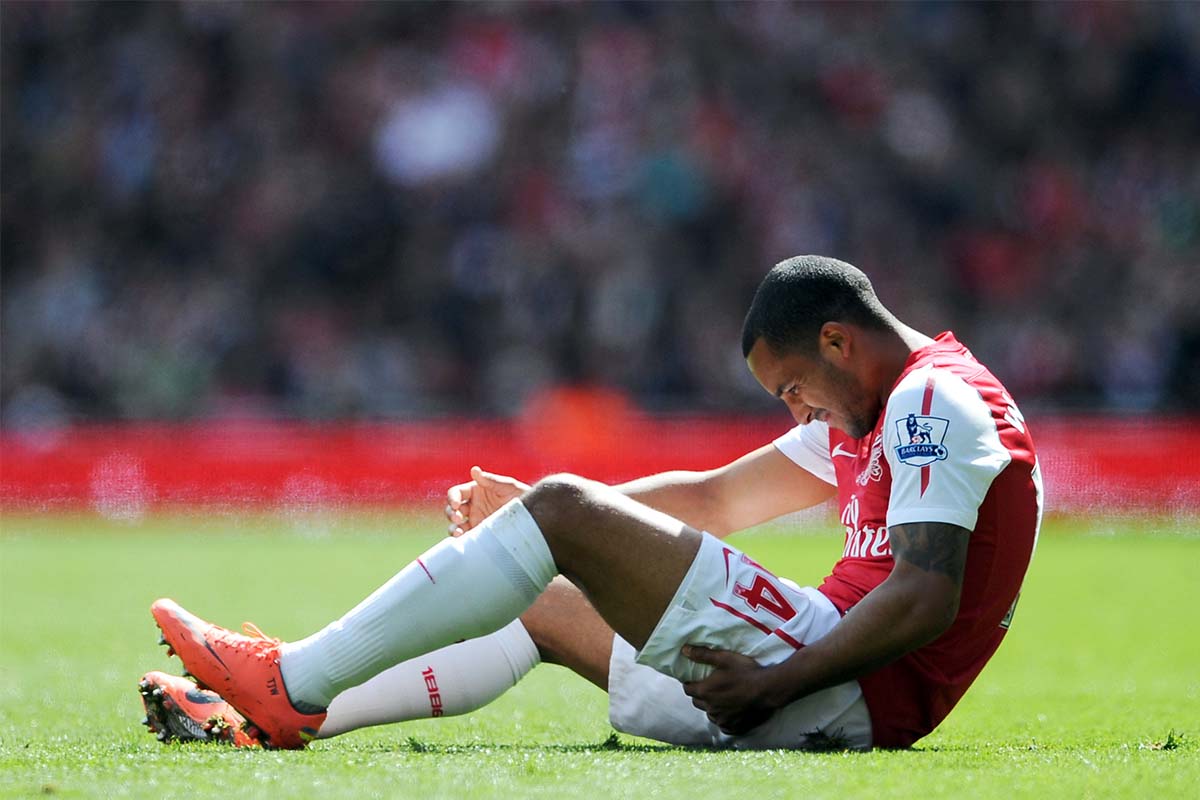 When Walcott burst onto the scene for Southampton before moving to Arsenal he was seen as the next big thing for English football. The new Michael Owen and Thierry Henry merged into one. A surprise inclusion in the England 2006  World Cup squad he was spoken of in the same breath as Wayne Rooney. A decade on and Walcott's only competitive International minutes arrived at Euro 2012 where he featured as a substitute. He wasn't taken to the 2010 World Cup or Euro 2016.

He's been at Arsenal for 10 seasons now but has only played 321 times, it works out on average he plays 32 times per season meaning he misses around 15 games each year. He's yet to cement a place in the Arsenal side and he's now 27, he should be entering his prime,  yet people still don't even know what his best position is.

Had he managed to stay fit he could well have over 100 appearances for England to his name, be a guaranteed starter for Arsenal and potentially have a Premier League medal or two having helped fire them to the title. 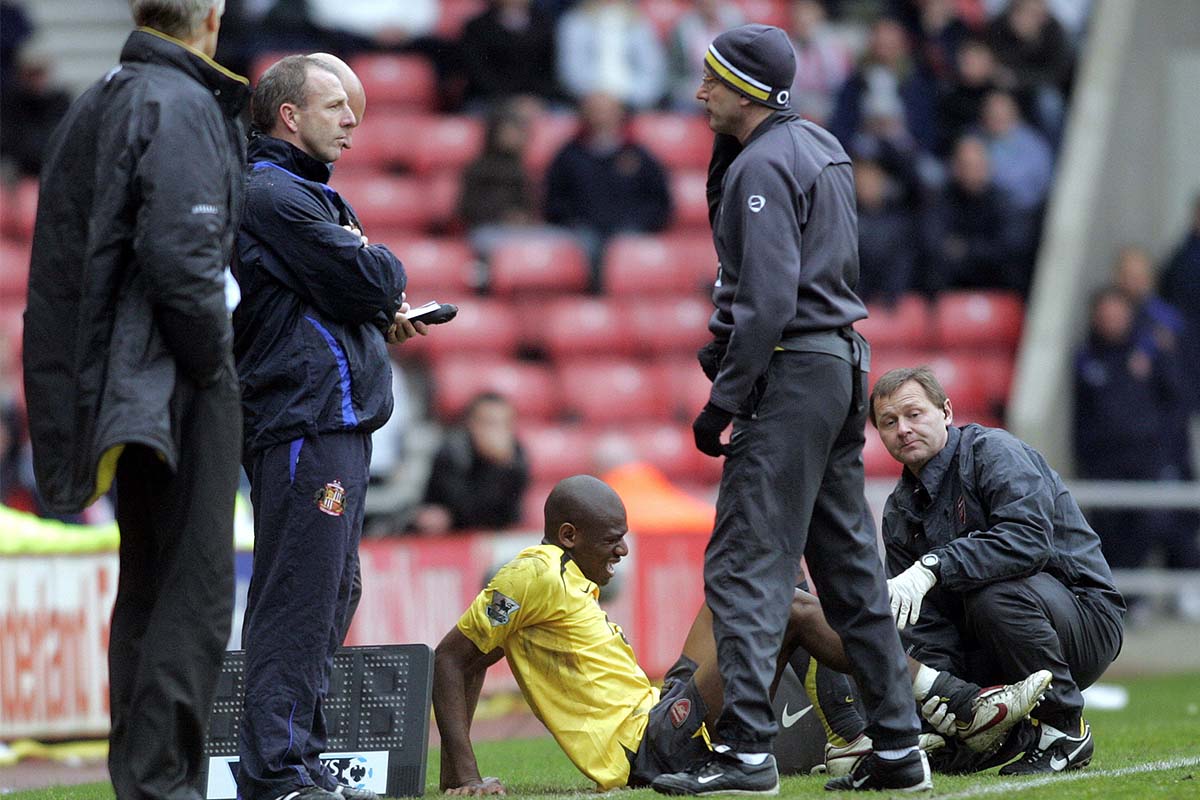 The now 30 year old has been featuring for teams for the past 13 seasons. However, this prolonged career has seen him amass just the 214 appearances. When he arrived at Arsenal he was viewed as a powerful box-to-box midfielder, the type who often dominate the midfield in England. The 2009/2010 season saw Diaby find a home as part of a midfield three alongside Cesc Fabregas and Alex Song. It was his best season ever as he appeared 40 times in all competitions.

With France Manager Didier Deschamps favouring big powerful units in midfield Diaby, if fit, would have been a guaranteed pick for Euro 2016. Arsenal, who have lacked any physical presence in midfield since that 2010 season may have fared much better in the Premier League had he not been so unlucky with his injuries. 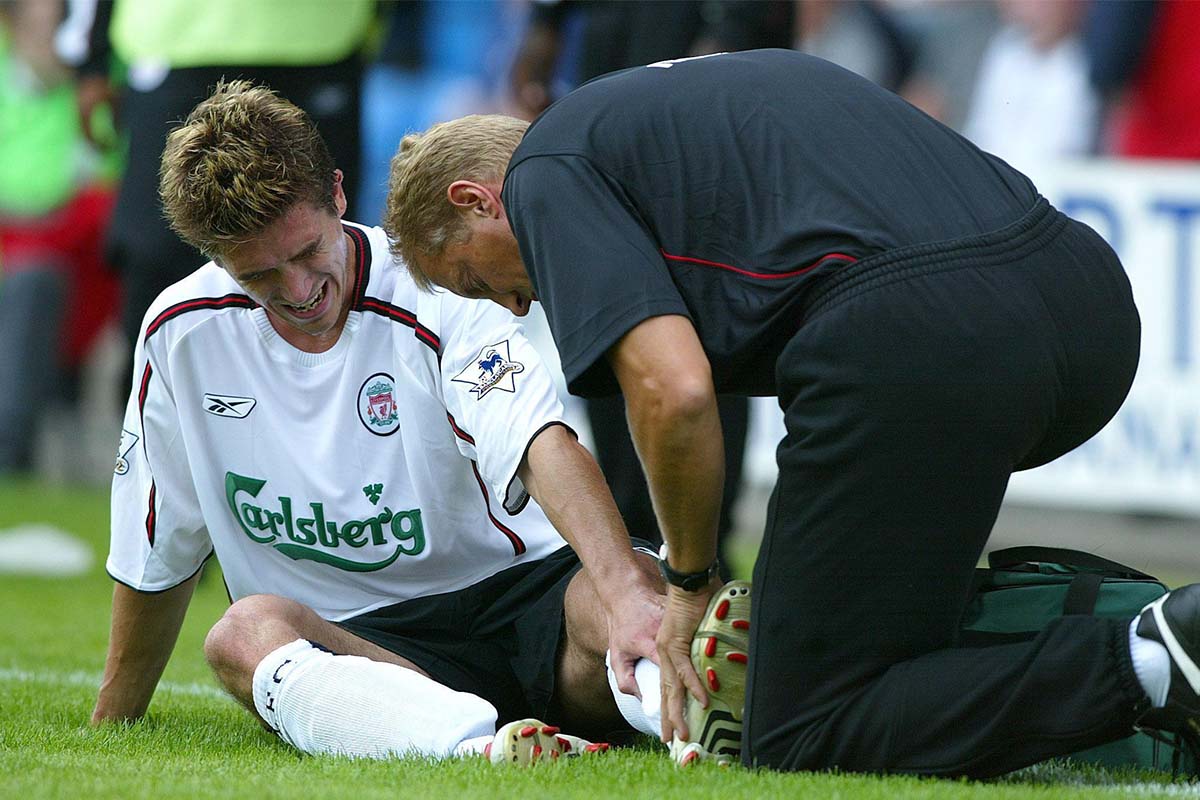 Kewell now works as the manager of the under 21 side at Watford having retired from football in 2014. In the Summer of 2003 he was the hottest free agent in football and had the world at his feet. Chelsea, Milan, Barcelona, Manchester United and Arsenal all wanted the Australian attacker but he eventually signed for Liverpool much to the delight of their fans. As far as they were concerned they finally had a man worthy of their famous number 7 jersey.

His first season at Liverpool saw him feature in close to 50 games and he scored 11 goals. It was a promising debut campaign. However, the following year he only appeared in 31 games in all competitions and was subbed off in the Champions League final due to an injury. He was also substituted in the 2006 FA Cup Final and missed almost a year due to yet another groin injury. His final season with Liverpool , 2007/2008, saw him working hard to earn a new deal but injury struck yet again when he went away with his country for a friendly.

He went on to have three successful years with Galatasaray but injuries never really allowed him to fulfil his potential.

Ledley King who was plagued with the same injury for his whole career. Without the injuries there's an argument to be made that he would've been England's best centre-back over the past two decades.

Dean Ashton who just as his career was really picking up had his career ended by an injury picked up on international duty. An all-round striker ahead of his time as he merged physicality with technical ability.

Jack Wilshere should have been a shoe-in for this piece but due to his young age he may be able to salvage his career. He's currently living off his hype from when he was 18 though and that credit won't last for long.

Michael Owen won the 2001 Ballon d'Or, scored a hattrick against Germany in Berlin and got a big money move to Real Madrid but was never really the same after leaving Madrid for Newcastle. He appeared in just the 140 games following on from that move to Newcastle as injuries took their toll.