As ever, this summer's World Cup is set to showcase some of the greatest footballing talent in the world, from Cristiano Ronaldo to Lionel Messi, Harry Kane to Mohamed Salah (assuming that he recovers from the injury he picked up in the Champions League final in time).

However, while we are practically salivating at the prospect of watching star-studded teams like France, Belgium and Argentina, some of the tournament's lesser lights possess their fair share of quality.

Every four years, the World Cup acts as a springboard for players, often earning them lucrative moves to Europe's biggest clubs. This year should be no different, with exciting players chomping at the bit to make an impression on the grandest stage possible.

So, here are eight players to look out for from some of the less-fancied nations.

Disclaimer: We've used the term ‘minnows' in the headline but we realise the countries mentioned in this article would not take kindly to being called that. Unfortunately, the blasted lack of space we have for headlines means less-fancied was harder to fit. Glad we got that straightened out – now, on with the article!

The 25-year-old attacking midfielder has enjoyed two fine seasons with Ajax since joining from Twente in 2016 and is a key player for Morocco.

Born in Dronten, Ziyech was eligible to represent the Netherlands but declared for Morocco back in 2015.

Ziyech's combination of silky skills and smooth passing have seen him linked with a number of clubs in the past few months and he recently emerged as an Everton transfer target.

He scored nine goals and notched an impressive 15 assists in the Eredivisie this season, also playing more open-play key passes than any other player with 2.54 per 90.

Ziyech's record for Morocco is impressive, too, having scored eight times in 15 caps and he'll have the chance to impress against heavyweights Portugal and Spain in Group B.

Fresh off a breakthrough campaign with Lazio, Milinković-Savić arrives at the World Cup as a player very much in-demand, with Manchester United said to be interested in the midfielder.

Aleksandar Mitrović was Serbia's top scorer in qualifying with six goals but Milinković-Savić has the complete package in midfield: goals, creativity and tactical discipline.

Lazio are said to be holding out for around £100million from interested clubs and, with a stellar showing at the World Cup, a potential suitor like United may be persuaded to meet the Italian club's astronomical price tag.

Much of Senegal's attacking threat in Russia will come from Liverpool's Sadio Mané.

In Ismaïla Sarr, though, they have one of the most promising prospects in African football.

The pacey 20-year-old winger has impressed with Rennes in Ligue 1 this season after having reportedly rejected Barcelona last summer.

Sarr scored five goals and notched three assists for Rennes and will be hoping to replicate his exciting form in the French top flight alongside Mané as Senegal take on Poland, Japan and Colombia in Group H.

With blistering pace and an average of 2.8 dribbles completed per 90, Sarr has the potential to form a devastating partnership with Mané and fire Senegal into the second round.

Although he never quite made it at Anderlecht, the tricky winger impressed at Turkish side Kasimpasa this season, with 13 goals and six assists.

Trézéguet scored one of the goals of the season, too, a perfectly-struck outside-of-the-boot effort that sailed into the top corner. It was the kind of goal Ricardo Quaresma dreams about at night and was an impressive snapshot of Trézéguet's ability.

The parallels with his more illustrious namesake, David Trezeguet, stop there. The Egyptian is not a poacher, but a devasting winger who may well prove to be one of the breakout stars of this World Cup. 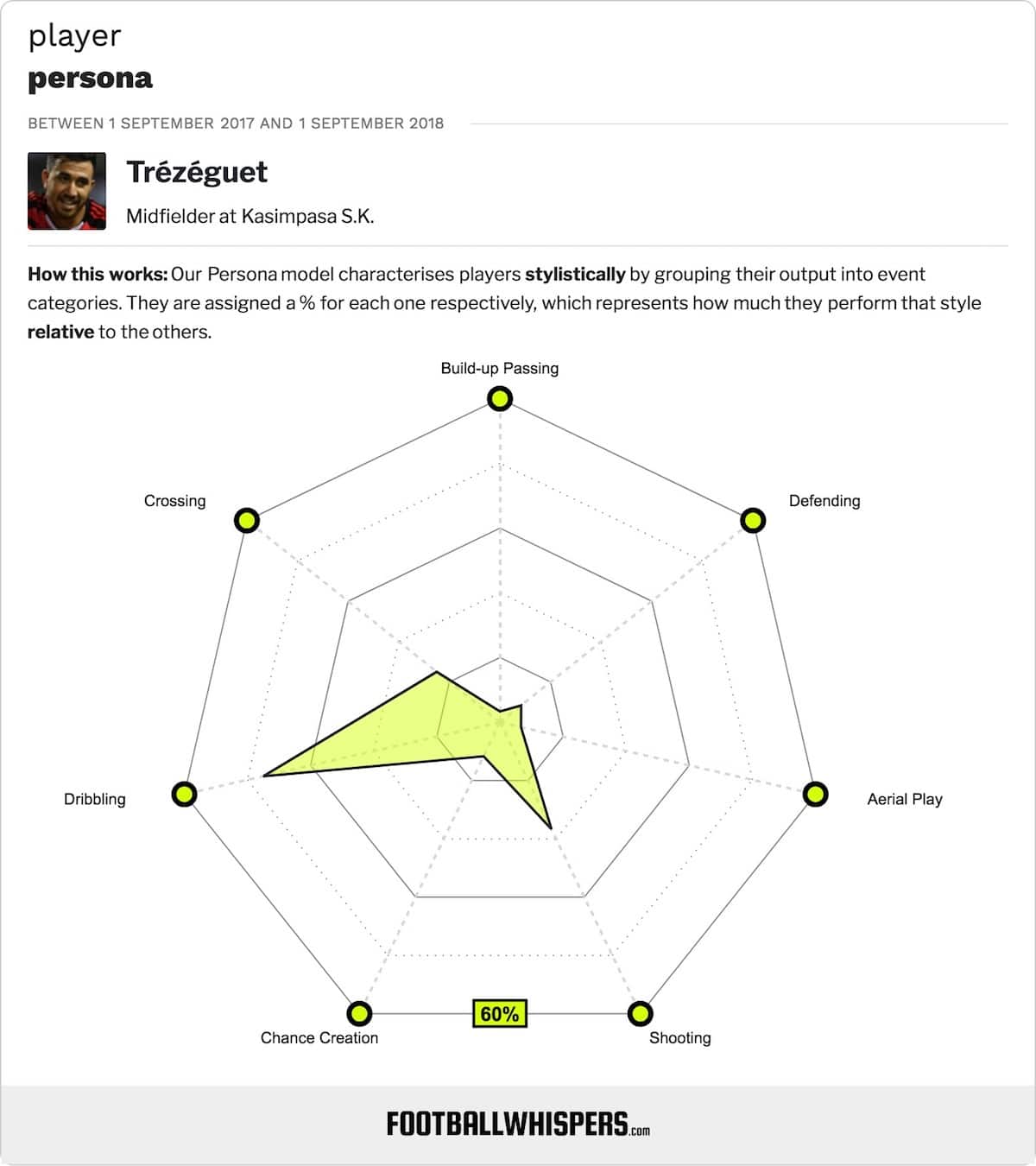 Flores will be presented with an interesting scenario when Peru face Denmark in their opening game. Based in Denmark with Aalborg, the 24-year-old winger will be lining up against players he knows well and will hope to use that to his advantage.

With five goals during the South American qualifying campaign, much of Peru's hopes rest on him, especially if captain Paolo Guerrero – who scored six goals in qualifying – fails in his bid to overturn a FIFA doping ban.

Peru's success in pipping Chile, Ecuador and Paraguay to qualification was built on conceding just seven goals in eight games and, while coach Ricardo Gareca will be hoping that his defence remains tough to break down, the fans will look to Flores to provide some inspiration in the final third.

In recent months, Azmoun has been called the ‘Iranian Messi', drawn comparisons to Zlatan Ibrahimović (which instantly jars with the Messi tag) and has been tipped to become Iran's most successful football ever.

The reason for the Zlatan-Messi hybrid comparison is that Azmoun is an exceptionally adept dribbler but also dangerous in the air.

The Rubin Kazan striker scored four goals in eight appearances in qualifying for Iran and has an overall record of 23 in 31 caps for his nation, which makes him the best forward in terms of goals-per-game ratio in their history.

Still only 23, Azmoun has time on his side but many have tipped him to shine at this World Cup and earn a move to one of Europe's top five leagues. 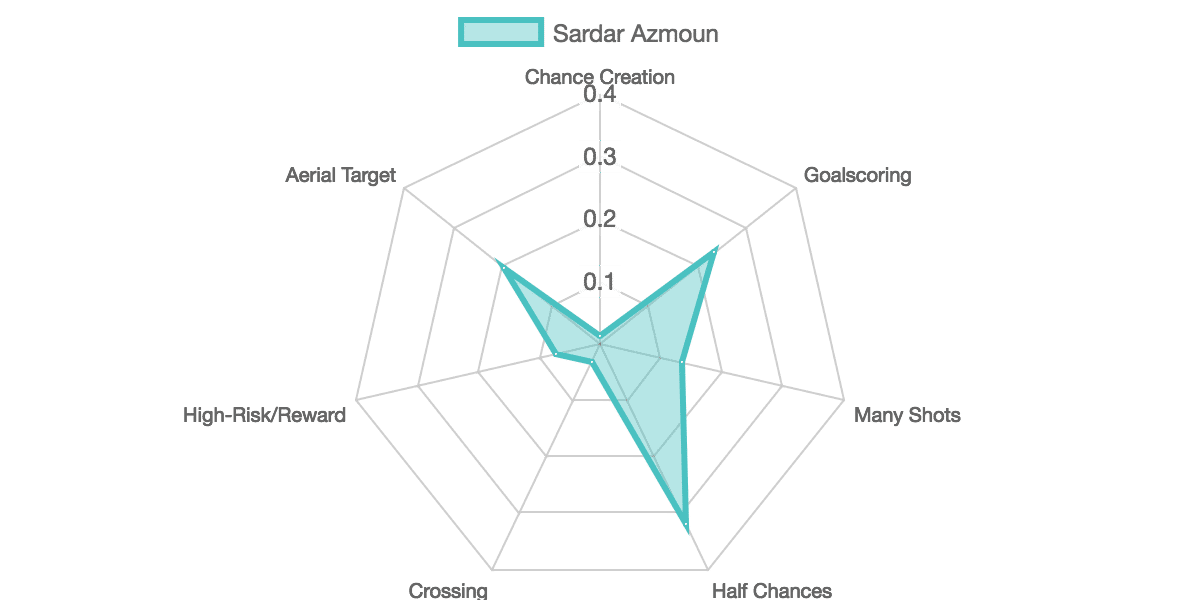 Saudi Arabia's preparations for the World Cup have been far from serene. Bert van Marwijk was sacked despite leading the country to their first World Cup since 2006. He was replaced by Edgardo Bauza, the former Argentina boss, who lasted a grand total of two months before getting the boot.

After a tumultuous few months, order has seemingly been restored under Juan Antonio Pizzi, the former Valencia and Chile head coach.

The one constant, however, has been Mohammad Al-Sahlawi, the experienced forward who struck no fewer than 16 during the qualification process.

In March, it was confirmed that Al-Sahlawi was to spend three weeks training with Manchester United to ensure he was razor-sharp before heading to Russia. With 28 goals in 38 games for Saudi Arabia and well over 100 for Al-Nassr, Al-Sahlawi is used to finding the back of the net.

Doing it against hosts Russia, Egypt and Uruguay will be a difficult proposition, though.

Grouped with Argentina, Iceland and Croatia, Nigeria are going to need every bit of help they can get to progress to the last 16.

Much of the attacking menace will be provided by Premier League trio Kelechi Iheanacho, Victor Moses and Alex Iwobi, but Super Eagles boss Gernot Rohr will look to his midfield for similarly influential performances.

Former Chelsea anchor John Obi Mikel, now with Tianjin Teda in China, is the captain and undoubtedly a major figure in the dressing room, and the 31-year-old will have energetic Torino midfielder Joel Obi for company in the middle of the park.

The 27-year-old scored six goals and notched two assists in 18 starts for Torino this season, proving enough to seal his place in Rohr's 23-man squad for Russia after having missed out in 2014.