Liverpool took a huge step towards Champions League qualification with an emphatic 4-0 win over West Ham at the London Stadium.

Philippe Coutinho was the star of the show, scoring twice and creating one, with Daniel Sturridge and Divock Origi also getting on the scoresheet.

If Liverpool beat relegated Middlesbrough at home next week, a top-four finish will be guaranteed.

West Ham have been a total embarrassment today.

The Hammers goalkeeper was powerless in stopping Sturridge rounding him for the goal but was let down by the poor defending in front of him.

The Spaniard made an excellent triple-save early in the second-half to deny Origi, Adam Lallana and Sturridge, but it was a day to forget for the 30-year-old after picking the ball out of the net four times. 6

Not the happiest of days for the centre-back, who was helpless in maintaining the Hammers’ resistance as Liverpool battered their defence.

The Portugal international struggled to keep Sturridge and Origi – both direct runners – in check and was often pulled out of position which left his side exposed. 5

The centre-half made a couple of key interceptions but his headed clearance after Wijnaldum’s volley that struck the bar fell straight to Coutinho.

When the Brazilian drove forward, Reid was unable to atone by landing a tackle on the Liverpool man. 5

The experienced centre-half made a great block to get in the way of an early Coutinho shot but was caught out of position for Sturridge's opener.

In addition, the 33-year-old’s attempt in stopping Coutinho for Liverpool's third goal non-existent. 4.5 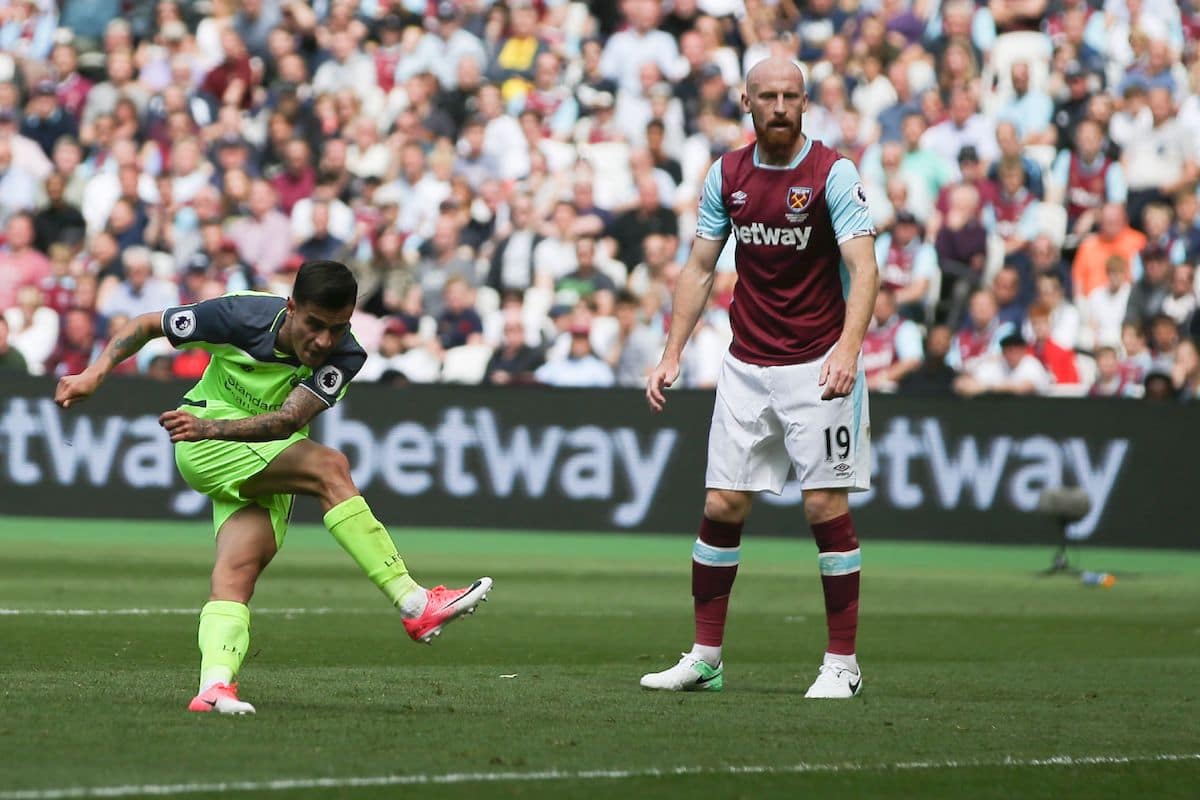 The right wing-back spurned an excellent opportunity to open the scoring early when he fired wide having been found by Calleri.

Was also culpable for playing Sturridge onside for the goal, not realising that he needed to step up despite looking right across the line.  5

The Swiss midfielder made seven ball recoveries but was also booked for a bad foul. The 21-year-old tested Mignolet’s reach with a decent effort but, overall, it was a frustrating day for Fernandes as he was unable to keep Liverpool’s creative players quiet. 5

The Norwegian wasn’t effective in preventing a Liverpool rout in what was a disappointing afternoon for the 26-year-old.

It's been a disappointing first season at the club for the former Arsenal man. 5

The former Liverpool youth player was a willing runner down the left flank early on but his defending left much to be desired, a weak attempt at stopping Sturridge leading to Liverpool scoring a fourth. 5

West Ham were perhaps guilty of not getting their most dangerous player on the ball more. When he did, he was capable of lifting the Hammers into high gear but was frustratingly confined to the periphery.

The Argentine was unable to conjure up a piece of magic with his teammates looking bereft of inspiration. 5.5

Astonishingly, the French forward missed a golden opportunity to equalise from a corner when he hit the post from two yards out, before failing to score again when the ball rebounded back to him.  4

The striker lost the ball on the edge of the Liverpool penalty area, which led directly to the visitors finding Sturridge at the other end and opening the scoring.

The Argentine was subbed off after 54 minutes, thus completing another fruitless afternoon for him. 4

Calleri is terrible. Where do West Ham find all these dud strikers? Seem to get a new one every season.

The keeper was commanding in dealing with the aerial threats and recovered quickly to smother the ball when Ayew missed from point-blank range.

The Belgian will have been pleased that he didn’t have to contend with the aerial prowess of Andy Carroll on what was a fairly comfortable afternoon for him. 7

The right-back put in a solid shift, keeping things simple with short, crisp passes and getting forward to support attacks when he could.

The former Southampton man will be pleased to have done his part as his side kept another clean sheet. 6

Was unlucky not to score the opener when his downward header bounced up and struck the crossbar from a corner.

The totemic Cameroonian fulfilled his duties at the back diligently, too, ensuring that Klopp’s men walked away from the London Stadium with a clean sheet. 7

The Croatian let Ayew go at a corner which almost cost Liverpool a goal, which is not the first time his marking from set-pieces has been less than superlative this season.

However, Lovren won three out of five aerial duels and completed 88% of his passes in a solid performance. 6.5

A steady influence throughout, Milner managed more ball recoveries than anyone else and started the move for the opening goal, laying the ball off to Coutinho.

The German was an effective ballwinner in the middle of the park, breaking up the Hammers’ attacks with his robust brand of tackling, completing three out of three.

Can is finishing the season strongly and added another fine performance here. 7

Provided plenty of creative spark and intensity for the visitors, as we’ve come to expect, but perhaps should have done better when his effort on the turn was struck straight at Adrian – failing to make it 2-0.

He may not have created any headlines but the midfielder’s honest contributions can never be discounted. 7

Almost scored a stunning volley when his effort looped onto the crossbar. The ball eventually fell to Coutinho, who finished it off with aplomb, so the Dutchman can claim to have played a part in the second.

The midfielder was at the centre of Liverpool’s controversial third, too, as he appeared to handle the ball before in his own box before they poured forward to score. 7

Showed flickers of quality before slicing West Ham’s defence open with a single pass to Sturridge for the opening goal, before creating the second for himself, dribbling around the Hammers defence before firing an unstoppable shot into the bottom corner.

The Brazilian wasn’t done there, though, ghosting past Collins to smash in his second, his team’s third, to wrap up the points. 9

?? Philippe Coutinho has more goals (33) and assists (29) than any other Brazilian in Premier League history. pic.twitter.com/0HS4fPRS6A

The Belgium international was a willing runner in behind for Liverpool, often offering a speedy outlet in attack.

Almost scored in spectacular fashion when he unleashed a wicked drive from 30 yards which clipped off the top of the bar but got his goal when he poked home after Wijnaldum’s initial effort. 7

His future may be shroud in uncertainty but the England striker displayed plenty of appetite here, controlling Coutinho’s pass and having the confidence to round Adrian and coolly slot the opening goal home to mark his first Premier League start since January with a well-taken goal.

Sturridge looked sharp from start to finish, expertly dropping the shoulder to skip past Cresswell and create the fourth. 8 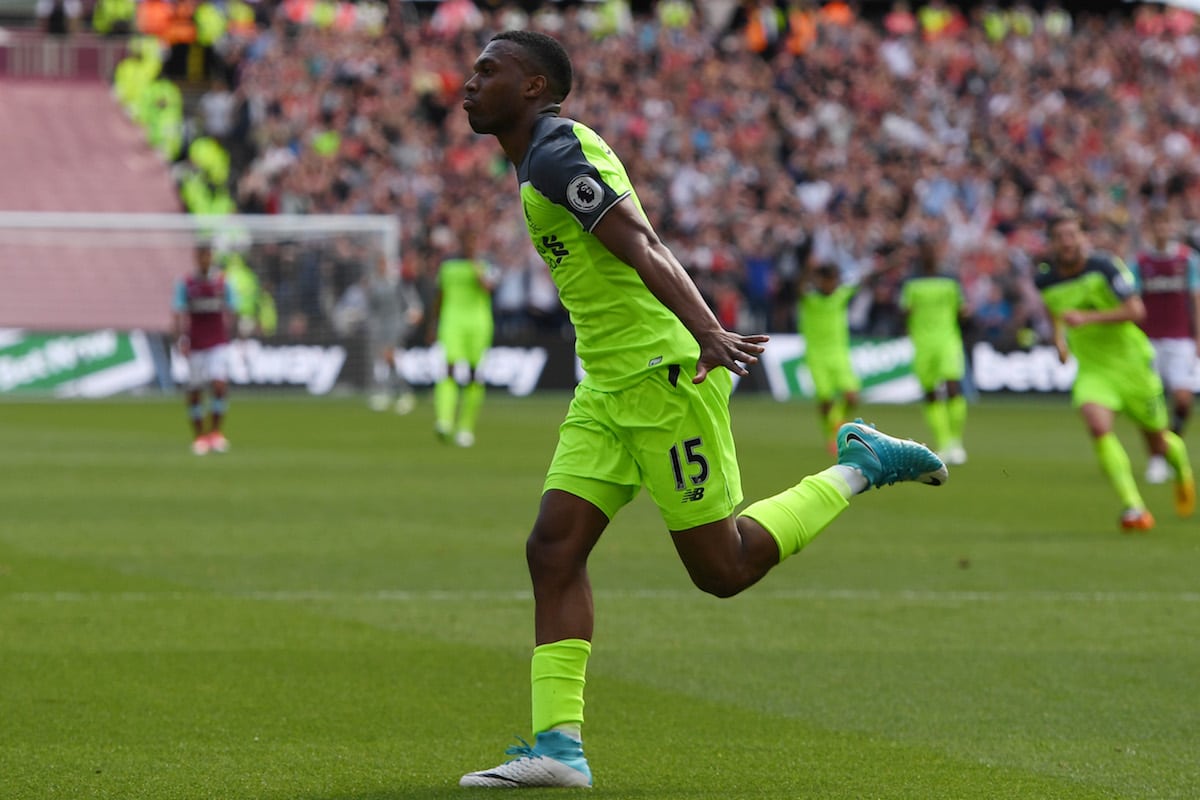