Manchester City secured an automatic passage into the Champions League group stages this afternoon with a 5-0 win over a hopeless Watford side who gave outgoing coach Walter Mazzarri a forgettable send-off.

A win ensured City finished in third, ahead of Liverpool, and secured their place in next season's Champions League with the Reds taking fourth spot with a 3-0 win over Middlesbrough.

Pep Guardiola's side managed that without having to get out of first gear. Vincent Kompany opened the scoring with a bullet header after five minutes before Sergio Agüero slotted home a second.

The Argentine bagged the Citizens' third with a tap-in from close range before Fernandinho registered a fourth prior to half time.

Watford improved, marginally, after the break and City only managed one more, Gabriel Jesus notching just before the hour.

How did the two sets of players rate at Vicarage Road? 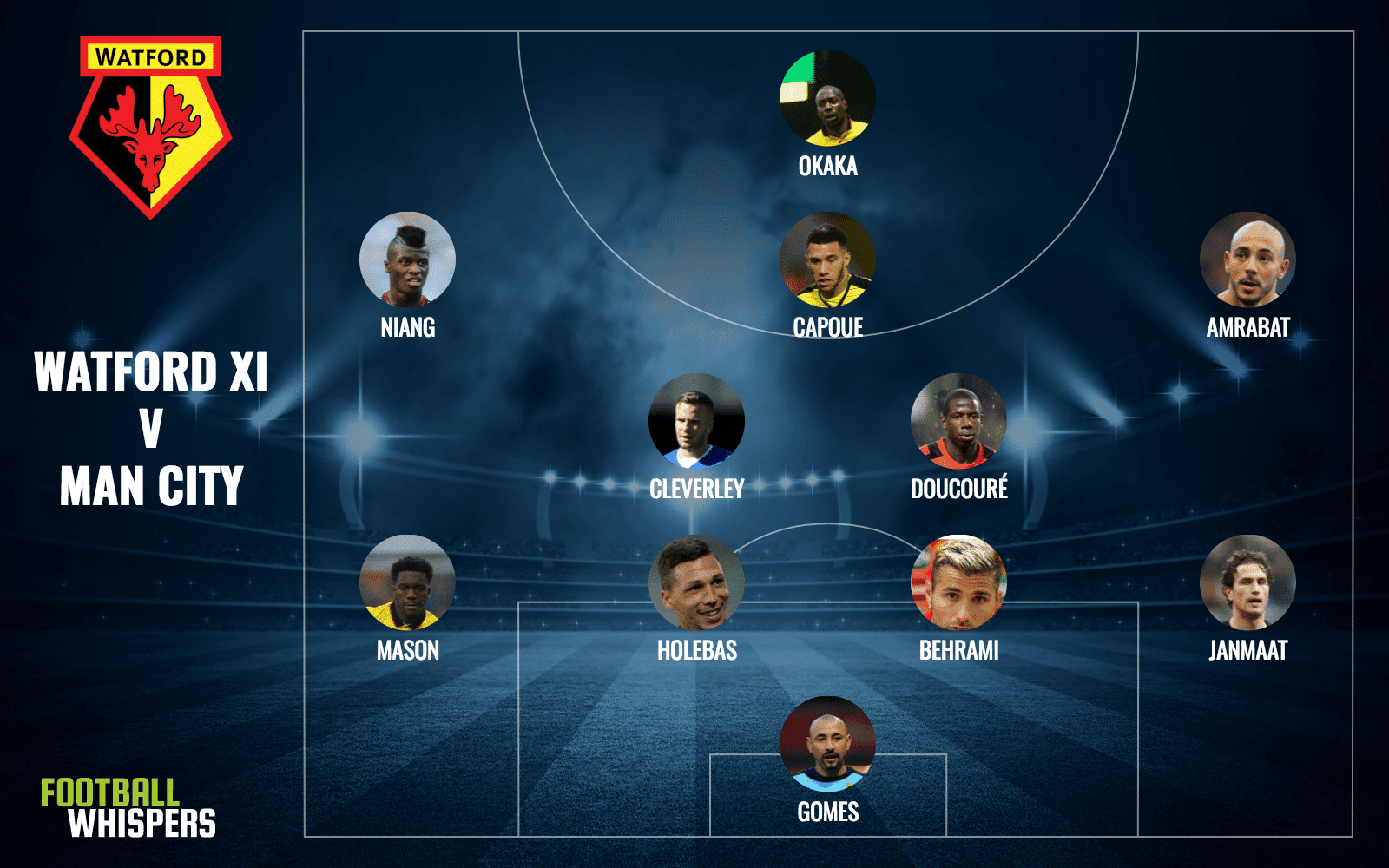 read more: why walter mazzarri had to leave watford

The Brazilian, who has started every Premier League game for the Hornets this season, endured a shaky start when he mis-controlled a routine back pass and almost allowed Agüero to nip in.

That was a rare blip, though, and there was little he could do with any of the goals and he did his bit to keep the score down with several good stops.

There was little the Dutchman, the only senior member of Watford's back four playing in his natural position, could do to prevent Leroy Sané breezing past him and sliding the ball across the Watford penalty area for City's third.

The Netherlands international was replaced shortly after with Under-21 defender Andrew Eleftheriou handed his Premier League debut.

A midfielder by trade, Behrami was pitched in at centre-back as Watford's defensive injuries mounted. The Swiss made a fine early block to prevent City going 2-0 up when Agüero was presented with an early tap in. He did, however, lose the Argentine for Manchester City's third and was troubled by the Citizens' pace and movement throughout.

Out of position at centre-back, the Greek international was caught in the wrong position entirely for City's second, allowing Agüero to break through the Hornets' brittle defence and score. He was at fault for the third, too, with Agüero again profiting from some questionable positioning to tuck home. And it was Holebas who then lost the ball carelessly to allow Fernandinho a simple finish for the fourth.

One of the few youngsters given a chance by Mazzarri this season, left-back Mason was handed his Premier League debut and did well under the circumstances. He made a fine early block to prevent City advancing but was caught playing Jesus onside soon after.

The Frenchman has improved Watford's midfield no end since being brought into the side late in the season. But the former Rennes man offered little in the way of protection to the Hornets' back four and won just one tackle in 90 minutes. He even managed to miss the hosts' best chance, scuffing his contact from a yard out after some less-than-convincing keeping from Willy Caballero.

Another who has breathed new life into Watford's midfield, Cleverley did not get close to Manchester City's midfield and failed to make a single tackle, winning the ball back once with an interception.

Like much of Watford's attack the Moroccan forward was AWOL. He attempted just 16 passes, completing 12. When he was hooked after an hour to be replaced by skipper Troy Deeney it was not before time.

Hard to know if the French midfielder was even on the pitch. Pushed forward in support of Stefano Okaka the former Tottenham Hotspur player made absolutely no impact on the game for the home side despite completing 87.5 per cent of his 28 passes.

The winger looks set to return to AC Milan this summer after a six-month loan spell at Watford in which he has shone in spells but also been inconsistent. The Frenchman had the hosts' best early chance, cutting in from the right and curling just over.

He showed great endeavour to win the ball from Fernandinho early in the second half but dragged his shot into the side neetting. That was the high point, though.

The Italian forward could do little up front on his own with the ball scarcely reaching him. He had Watford's best chance of the second half, driving into a shooting position and forcing a good save from Caballero with a ferocious shot. It is unlikely the former Fulham and Roma man will be back next season. 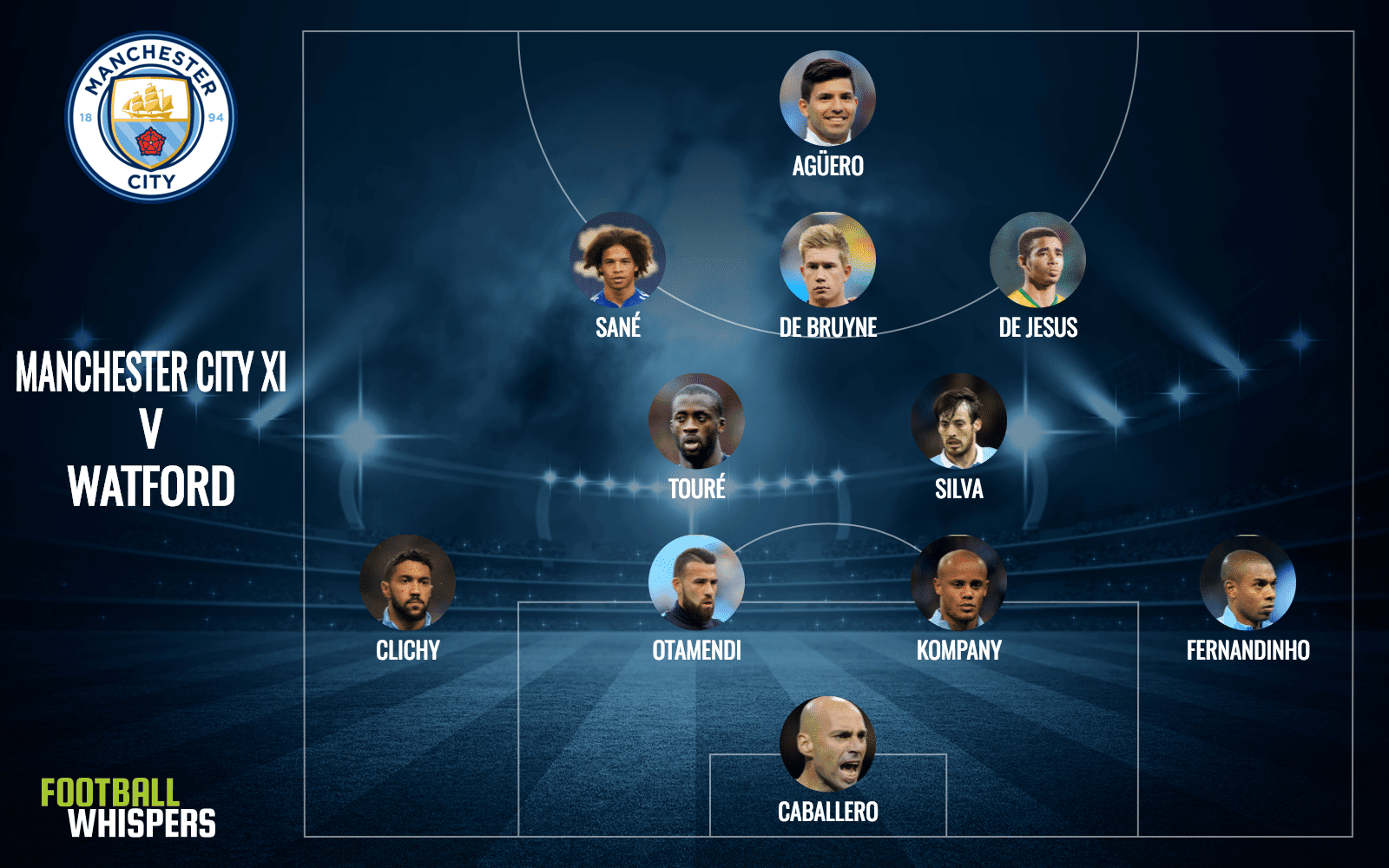 read more: sergio agüero may have to accept backup role

A quiet afternoon for the goalkeeper who only had one save of note to make in 90 minutes, pushing away Stefano Okaka's fierce drive early in the second half. He won't have had many quieter afternoons in the Premier League.

Reinstated at right-back ahead of the outgoing Pablo Zabaleta and got in on the goalscoring act shortly before half time with City's fourth, brushing past Brandon Mason and rattling home with an accomplished finish. Defensively he was not troubled apart from one piece of mis-control which saw Niang nip in and win a corner.

Couldn't have been given more time to head in the opener from Kevin de Bruyne's cross, somehow finding himself free of a marker ten yards out and in a central position. On a defensive front it was a quiet afternoon for Kompany.

Like Kompany alongside him the Argentine was scarcely troubled. The home side offered marginally more attacking threat in the second half and it was Otamendi who was on hand to deny Abdoulaye Doucouré from point-blank range in the second half. There is a useful partnership with City skipper Kompany building.

With Nordin Amrabat his direct opponent it was little surprise Clichy was able to breeze through what could be his final appearance for City. The Frenchman completed 92.5 per cent of the 53 passes attempted one 100 per cent of his tackles, completing one interception and one clearance.

City's midfield metronome quietly went about his business, pulling the strings for the visitors and completing 25 of 32 passes in Watford's third of the field. The Spaniard received possession 77 times, and completed 87.2 per cent of his 78 attempted passes.

The Ivorian's contract at City is up at the end of the season and he was afforded a lengthy hug with Guardiola when replaced shortly before the hour. Reports suggest he will be offered another year at the Etihad – some turnaround given the high-profile falling out between the player and his coach. Today he was able to breeze through, completing 32 of 37 passes and winning two of his three tackles.

The Belgian bagged a record 16th Premier League assist of the season in the midweek win over West Bromwich Albion and added to that with two more at Vicarage Road.

The first was the corner for Kompany's free header but the second was something special, a sumptuous threaded pass for Agüero to break the backline and tuck past Heurelho Gomes.

The German's pace was always going to be an issue for Watford's makeshift back four. And so it proved when he darted down the left to cross for Agüero score his second and City's third, outstripping the luckless Daryl Janmaat.

The Brazilian continued his fine scoring record by bagging his seventh goal in just ten outings since arriving in January. The only surprise was it took until the 59th minute for the former Palmeiras man to net, doing exceptionally well to latch onto a bouncing ball and hook over the helpless Gomes.

The Argentine equalled his best goalscoring season for Manchester City by bagging the visitors' second after 23 minutes, his 32nd of another superb campaign.

To the surprise of no-one, the former Atlético Madrid man then made 2016/17 his statistical best after 37 minutes by tucking home Leroy Sané's low cut-back. With 20 minutes remaining City showed some sympathy for the Hornets and brought Kelechi Iheancho on instead.