On what was a largely comfortable day for Manchester United at the Stadium of Light, the Red Devils coasted past 10-man Sunderland by a scoreline of 3-0 with strikes from Zlatan Ibrahimović, Henrikh Mkhitaryan, and Marcus Rashford. It was Sebastian Larsson who was given his marching orders following a dangerous tackle on Ander Herrera near the end of the first half.

It is a result that leaves the Black Cats marooned at the bottom of the table, a huge 10 points from safety, with seven games to go. Only an impressive winning streak can save them now, but on this season's form, that is unreasonably hopeful.

As for Jose Mourinho's United, their top four hopes remain alive and well as they are now four points off fourth-placed Manchester City with a game in hand on them and two games in hand on third-placed Liverpool, who are six points ahead.

Sunderland are the 4th team in the PL era that have failed to score in 7 successive games – 1st since Derby in 2007 pic.twitter.com/VA2AuEL0Hh

Jordan Pickford – The scoreline is rather harsh on the young ‘keeper as he could have done little to nothing about any of the three goals. He made one fine stop low to his dominant left side in the first half to deny a finessed effort by Jesse Lingard and his distribution was generally quite good. If Sunderland do go down – and it looks more and more likely with each passing week – it is very likely he won't go down with them. He certainly does not deserve to. 6.5

Billy Jones – Had no real control over Lingard, his direct opponent, as he was allowed to drift inside largely untroubled. Managed to win four aerial duels and one tackle, though. 6

Lamine Kone – Is definitely built physically to comfortably handle the huge frame of Ibrahimović, but he struggled to contain him and the other United attackers. Just the one aerial duel and tackle won again reinforces the point that this team is not solid enough defensively. 5.5

Jason Denayer – Can leave the game with some respect as he put in a determined defensive effort. He made a game-high five blocks as well as six clearances. 6.5

Bryan Oviedo – Was lively in defence as well as going forward. Made seven ball recoveries and three interceptions, the last of which saw him injure himself, cutting his game cut short as a result. 6.5

Lee Cattermole – His experience has been missed. Hardly saw the ball, attempting just 14 passes, but a few of them were nice ones. He also attempted a few tackles (5), as is custom, but he won just one. 6

Didier Ndong – Easily the team's best player as he ran up and down the field to win the ball back and drive his team forward, leading his team in ball recoveries (8), tackles (6), fouls suffered (5), chances created (2) and completed passes (24) for his team. Needed support. 7

Jack Rodwell – Remains a shadow of the player that broke through at Everton several years ago. Put himself about and saw much of the ball for his side, completing 20 passes, a figure bettered by only Ndong, but he had no real impact. 6

Sebastian Larsson – Put himself about defensively, completing two tackles, but a poor one executed on Herrera near the end of the first half saw him rightly sent for an early shower. 5

Jermain Defoe – Had little to no service as United enjoyed the lion's share of possession (70 per cent), forcing him to track back to help his team defend, which he did well enough. Was visibly frustrated as he had just one shot on target. 6

Victor Anichebe – He was another frustrated figure up top as the service just did not come his way. Several long passes were aimed at him (he won six attacking aerial duels, the most of anybody on the pitch), but he could not direct them as he pleased. Had just the one shot on target too. 6 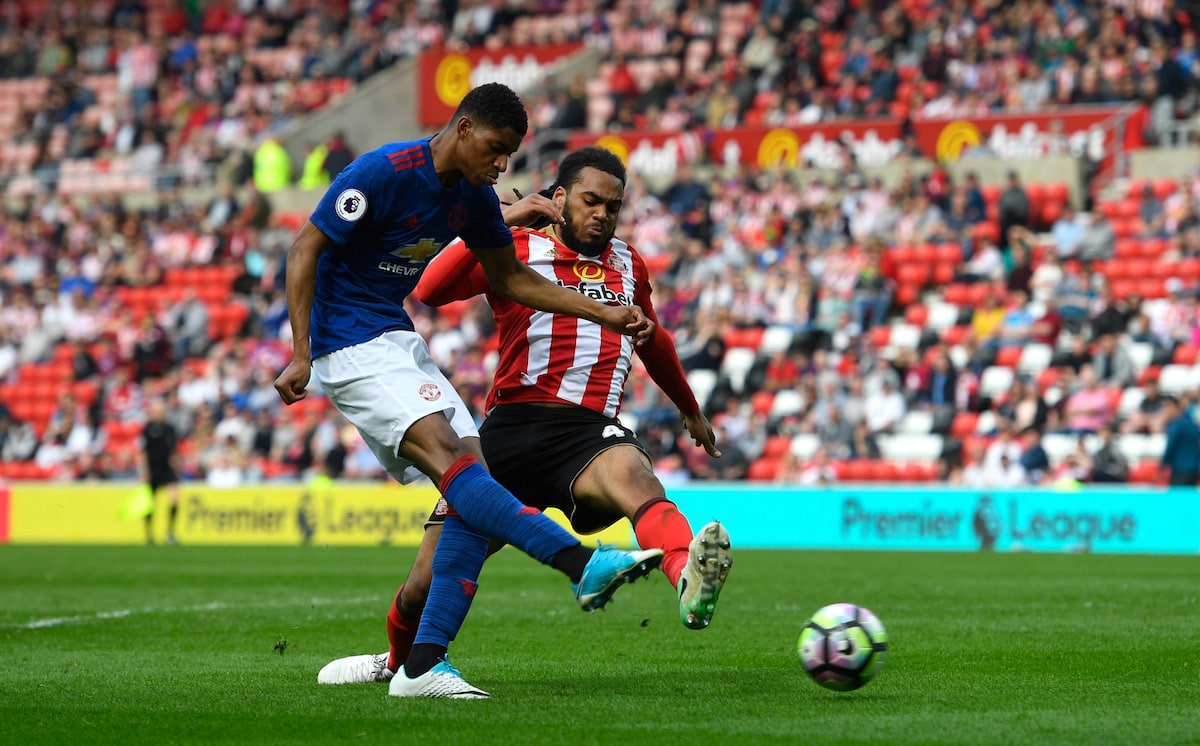 Sergio Romero – Was largely untroubled. Had a couple of routine saves to make, though, as shots were aimed directly at him. 6

Eric Bailly – Put in an okay performance here as he is still working his way back to his pre-injury form. Was outshone by his partner, Marcos Rojo. 7

Marcos Rojo – Put in another solid display as he continues his good form since the tail end of last year. Made the joint-most headed clearances (4) of any player on the field as well as eight clearances, and a team-high four interceptions. 7.5

Luke Shaw – Surprised most by starting this game but did not disappoint, putting in a solid display before being subbed. Created the most chances in the game (4) as he overlapped time and time again. Played a lovely ball over the top as well to set up Mkhitaryan for his well-taken goal soon after the break. 7.5

Marouane Fellaini – Raised eyebrows when he emerged with the captain's armband, but put in the kind of display that has endeared him to his manager. Completed the joint-most tackles for his side (3) and ranked second for chances created (3). Should have scored following a delightful cross from Shaw. 7

Ander Herrera – Was typically lively, making the most ball recoveries of any player on the field (9). Also saw much of the ball as his team dominated proceedings, completing the second-most passes (76). 7

Paul Pogba – With United in control of the ball, Pogba should have been in control of the game, but was not. He had his moments and saw enough of the ball, completing the most passes of any player on the pitch (78), but it was hardly a dominant display from him. Missed a good chance to score too, following a nice pass from Ibrahimović in the box. 6.5

Henrikh Mkhitaryan – Not his best game, but was still lively. He did not create a single chance and had just the one shot on target, but he scored it – and it was a lovely goal too. 7.5

Zlatan Ibrahimović – Left the game with a goal and an assist even though it was not an outstanding performance from him. Took his goal well and his pass for Rashford was well-weighted. He could have had at least two more assists if he picked the right pass when Pickford left his line near the end of the game and if Pogba kept his shot on target. 8

Jesse Lingard – Was typically lively and provided a couple of danger moments, for example when he forced a fine save from Pickford in the first half. But he has seen better days. 6.5