This would've been painful for Antonio Conte. The Chelsea boss is regarded in the highest esteem in his home country after his work with Juventus and the national team, but tonight, against Roma, he suffered an embarrassment.

His Blues side were outplayed in every respect. I Giallorossi were fitter, stronger, faster and, quite simply, much better. They led from the 34th second and never looked in danger of surrendering their advantage.

Chelsea had their moments and at 1-0 down Àlvaro Morata missed a glorious chance to equalise, but you doubt it would've made too much difference to the final result. Roma just had too much quality for Chelsea.

Stephan El Shaarawy's opener was stunning, his second the result of awful Chelsea defending. Diego Perotti added a third with a fiercely struck shot from distance and from that moment the game was over.

Conte's defence was ragged for the remainder of the game. Only a fine stop from Thibaut Courtois and a wasted chance from Perotti stopped the visitors from suffering further damage.

Fortunately for Chelsea, qualification is still very much in their own hands. Atlético Madrid's shock draw at home to Qarabag means the Blues have a four-point gap over the La Liga side. One win from two games is enough.

But tonight's display requires deep analysis from Conte and his staff. Too many Chelsea players underperformed and we have rated the Blues below.

The big Belgian's first touch of the ball was when he collected it from his net. He could do nothing to stop El Shaarawy's brilliant strike but did well to deny the Italian after a mistake from David Luiz.

However, he was beaten again moments later when El Shaarawy poked home a hopeful pass forward from Radja Nainggolan.

Courtois may feel he could've done more to keep out Perotti's goal but he redeemed himself with an excellent save from Edin Dźeko in the second period.

The German was looking the most composed of Chelsea's back three but one slip-up proved very costly for the visitors.

Why Rüdiger didn't clear a speculative pass forward, only he knows. But it allowed El Shaarawy to nip in ahead of César Azpilicueta and put Roma two goals ahead.

The mistake seemed to rattle Rüdiger, who was poor for the remainder of the contest. He was constantly dragged out of position and couldn't deal with former team-mate Dźeko's strength.

Chelsea's floppy-haired Brazilian was sluggish to react in the build-up to Roma's opener and a mistake late in the first half almost proved costly for the Blues, but Courtois did well to deny El Shaarawy.

Luiz's passing was crisp which allowed Chelsea to start quick attacks but there is no doubt the defender is failing to perform at the same high level he managed last term.

Tellingly, Luiz made just one tackle, two interceptions and not a single block against Roma.

Surprisingly deployed on the right of the back three, Cahill was the least culpable of any of Chelsea's defence for either of Roma's first half goals.

He was replaced, however, in the 55th minute of the second period as Conte searched for a route back into the game.

The versatile Spaniard never looks entirely comfortable at wing-back and that was again the case at the Stadio Olimpico.

Alexandar Kolarov's forward runs were a constant problem for Azpilicueta but he did manage to halt several dribbles from Diego Perotti.

Azpilicueta made five tackles during the game, the most of any Chelsea defender by some distance. He also showed heart that was lacking from many of his team-mates by running off what looked a painful foot injury in the opening 45 minutes. 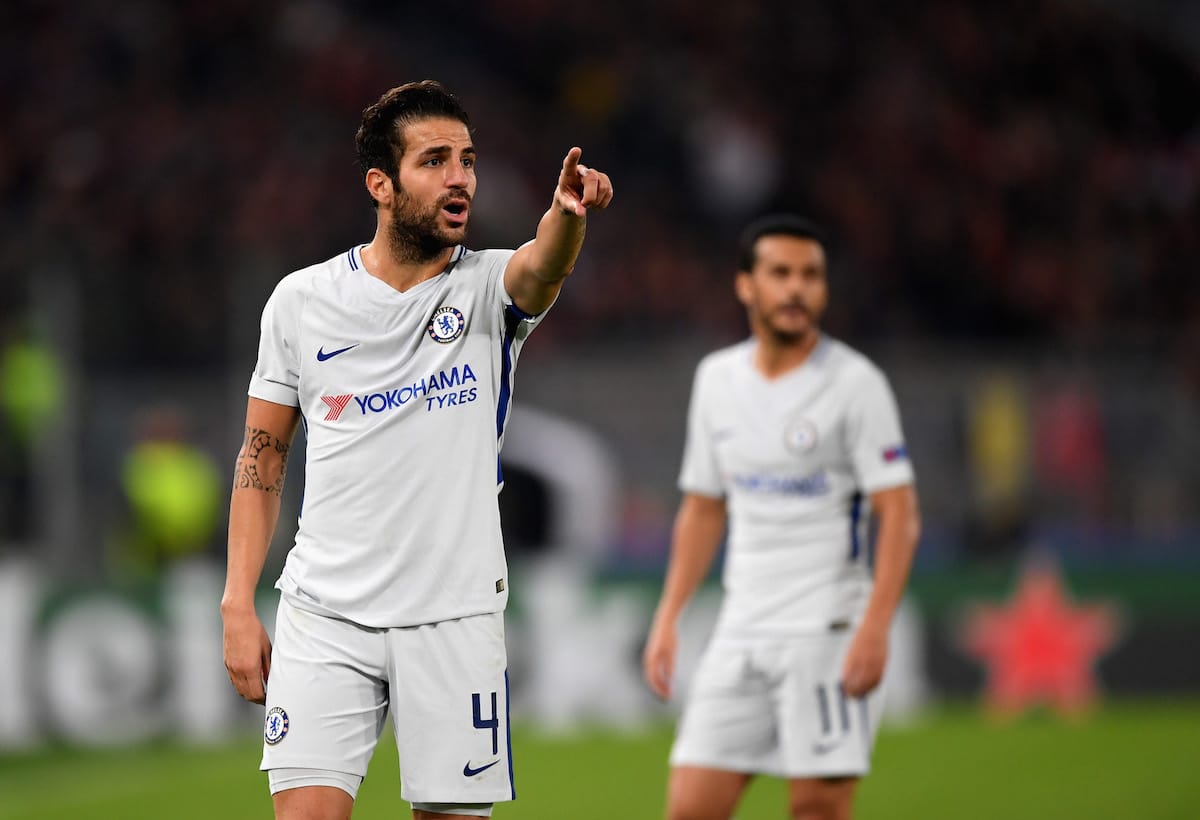 The game was Fábregas' 100th in the Champions League but, unlike many of the 99 that had come before, his passing was poor. One through ball early into the contest put Eden Hazard in on goal but that was his stand-out moment.

Playing as one of the deeper midfielders exposes Fábregas' lack of defensive awareness and he was too slow to close down Kolarov for Roma's opening goal.

His passing was also wayward and he gave the ball away surprisingly often in the second period. It was his poor pass that was crucial to Roma's third goal and he attempted several long balls over the hosts' defence that were easily dealt with.

Was brought off after 70 minutes for Danny Drinkwater, perhaps with Conte turning his attention to Manchester United's visit on Sunday.

You sense the French midfielder hasn't quite got to grips with Conte's demands yet. He is a powerful presence in the middle of Chelsea's side but often gets caught too high up field which, when Fábregas is his partner, means the Blues defence is exposed far too easily.

With no N'Golo Kanté the Blues midfield is soft, Bakayoko must start taking more responsiblity.

He only made one tackle and one interception during the 90 minutes. For a player with his physical gifts, that is simple not good enough and he must improve.

Alonso was one of the great success stories of Chelsea's title win last season but he's looked sluggish during the opening weeks of the current campaign and that was again evident at the Stadio Olimpico.

He was flat-footed in the build-up to Roma's opener which gave El Shaarawy the time needed to plant his shot past Courtois, and was slow to get back when he did go forward.

He did force Alisson into a good stop in the first half but was much quieter in the second period. He only completed one tackle and made just one interception while, in attack, he didn't complete a single cross of the five he attempted.

But with no other natural left wing-back in his squad, Conte will have to persist with Alonso and hope he rediscovers his best form in the coming games.

His movement in the final third often goes unnoticed, but the Spaniard doesn't constantly find himself in pockets of space by accident. However, when he had the opportunity to turn and face the Roma defence, he was always quickly closed down.

Pedro moved to wing-back in the second period which gave him room to put several crosses into the penalty area. Far too often, though, his delivery was poor.

Chelsea's man of the match. From the opening minutes the Blues' brilliant Belgian looked in the mood and he forced an early stop from Roma goalkeeper Alisson after breaking through on goal.

Hazard's movement out of possession and trickery with the ball stood-out. Several times in the opening half Chelsea's No.10 skipped past challenges and worked the home side's stopper.

His influence on the game faded in the second half as the visitors struggled. His reaction after dragging a late shot wide – imploring his team-mates to make off the ball runs – summed up his frustration.

Chelsea's record signing went into the game without a goal in five and, while you doubt he is lacking for confidence, he did snatch at a glorious first half opportunity.

A clearance deflected into his path and, from eight yards out, Morata managed to lift the ball well over the crossbar. It was a rushed finish from a man usually so composed in front of goal.

It proved to be Morata's only chance in the game. He was managed well by the Roma defence and was unable to hold the ball up which led to several Chelsea attacks breaking down.

It's on nights like these that Chelsea miss the one-man wrecking crew that is Diego Costa. Morata's game is more nuanced than the man he replaced but he needs service. When that isn't there, the Spanish striker is usually quiet. 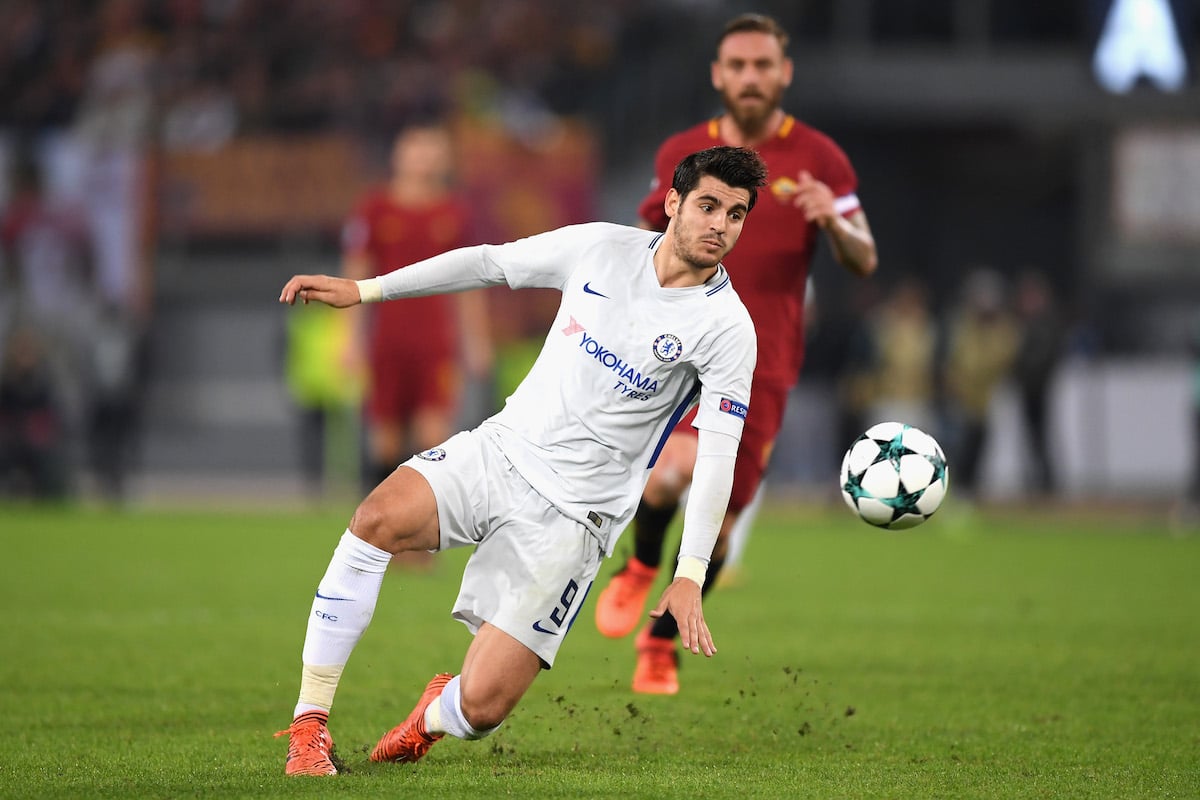 Drinkwater for Fabregas (70) – Brought on to protect Chelsea's defence, which was all over the place. 6

Batshuayi for Morata (74) – Had little time to make an impact. 6

Made several stops to deny Hazard in the opening period and also produced a full-length save to push clear a shot from Alonso. Collected several crosses without any problem. A fairly easy night's work.

Understated but impressive display from the full-back who completed more interceptions (four) than any Roma player.

His lack of pace was exposed early on by Hazard but the Argentine recovered and was again impressive. Looks a completely different player from the nervy centre-back Tottenham Hotspur fans will remember.

A very impressive display from the Brazilian. He was composed when in possession and his positioning was excellent as he cut out several crosses.

The former Manchester City full-back's pass led to Roma's opener and he was never afraid to push forward. Azpilicueta struggled to keep the Serbian quiet throughout. He looks revitalised at Roma.

The Belgian's energy is crucial to this Roma side. He broke up several Chelsea attacks but also forced Courtois into more than one decent stop during the game.

Didn't feature in the game at Stamford Bridge but was back in the side and was his usual disciplined and effective self. How Chelsea could do with someone of his nous in midfield without Kanté.

Quietly broke up attacks throughout the game. No Roma player made more tackles than his four and he also made three interceptions. 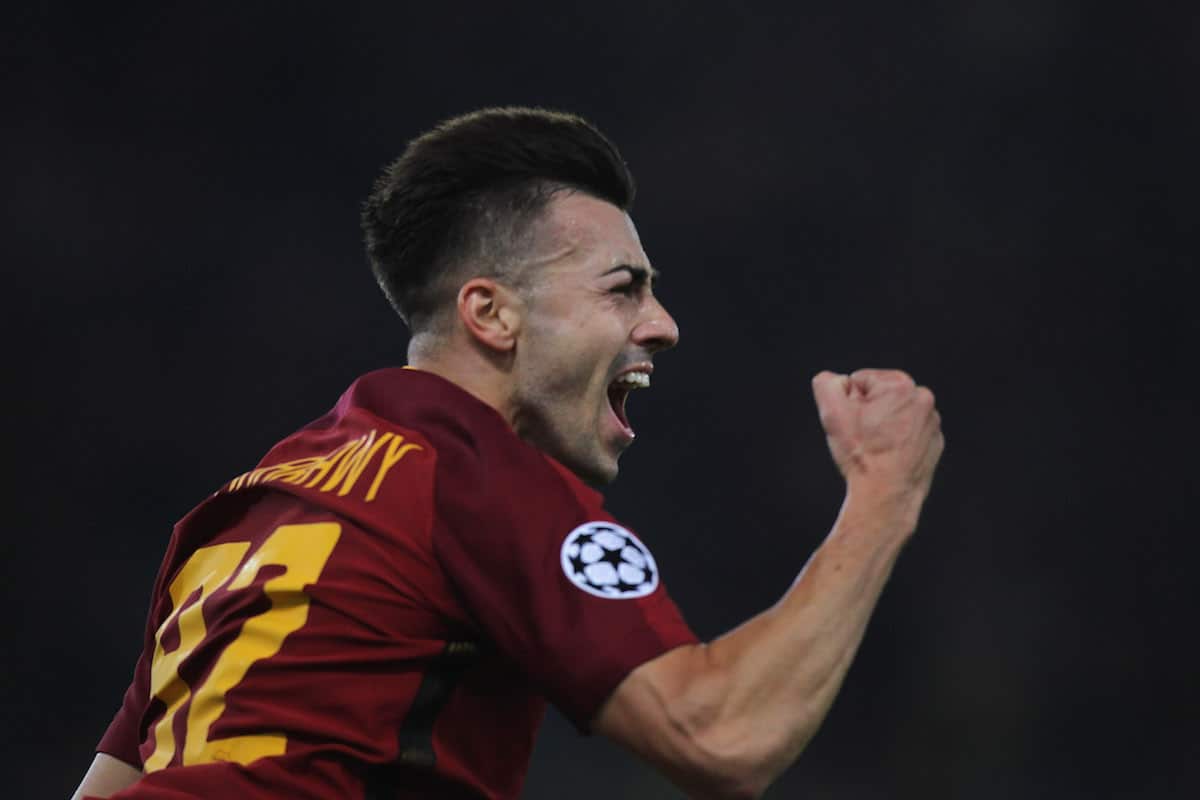 Scored a stunning goal at the weekend and repeated the trick inside the opening minute. Was a constant threat and took his second excellently, too. Alonso struggled against his pace and creativity.

The Argentine was impressive at Stamford Bridge but struggled to get involved in the opening 45 minutes. He was far more influential in the second period and took his goal superbly.

Roma's frontman wasn't as devastating as he was two weeks ago, but he played a big role in his side's win. He assisted the first goal and was a handful for Chelsea's defence throughout.