A scrappy but entertaining game at the Etihad saw Manchester City and Manchester United share the points in what was an intense derby.

There were a few standout performers on both sides, and one player who made an impact on the game for all the wrong reasons.

Pep Guardiola will be disappointed his side were unable to capitalise on their late advantage, but the point is handy for both sides as they look to secure a top four place.

Here’s how the players rated in the 0-0 stalemate.

Palmed a Martial cross into the path of Mkhitaryan, but made up for this strange decision with a good follow-up save. Taken off injured in the second half. 6

Did a decent job on both sides of the ball down the right hand side. Knocked a dangerous cross out for a corner in the opening minutes of the game. 7

A couple of dominant challenges early on, just on the right side of the referee. Was an imposing presence at the back for the home side, and was the only defender able to nip United attacks in the bud. Was even able to win the ball when Rashford fouled him. Made three tackles and four interceptions in the game as he impressed in his ground duels. 9

Won headers but struggled to keep up with a pacy United attack. Eventually got his man towards the end of the first half when he made a good tackle on Rashford. Became more assertive on the ground as the game went on, following Kompany’s lead. Won five aerial duels, more than any other player. 7.5

Good in attack and was able to produce some dangerous crosses, as well as a shot in the first half which tested De Gea. But he found it difficult against United’s speedy attacking trio. Made two key passes but couldn’t get an assist. 6

Involved in a battle with Herrera befitting of the derby. Was Toure’s understudy, so had to play his football in an understated fashion, but he did so in a useful manner. 6

Is able to breeze past supposedly quicker opposition players with ease. Controlled the midfield with a good passing display. Had a pass success of 92 per cent and had the most touches on the ball with 118. 8 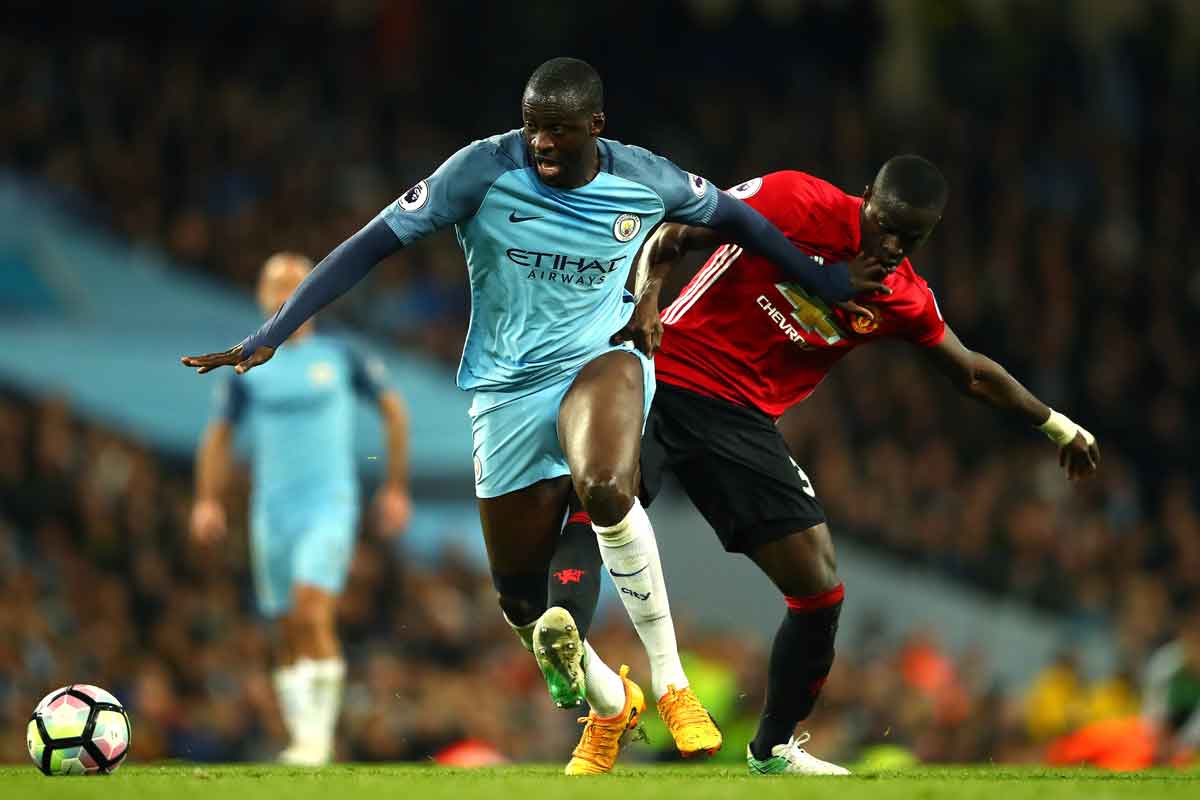 READ MORE: Guardiola failings should not be judged by Pellegrini's successes

The United midfield found him difficult to handle, and on one occasion he even knocked Fellaini off the ball. Put through by Aguero but blazed over the bar. Came out of the game with a pass success of 92 per cent, which is impressive for a player in his position. 6

Cross for Agüero should have led to a goal. Had an early shot easily saved by De Gea. Was more involved in the second half, showing good dribbling ability and direct passing. Made a total of ten crosses in the game which was more than any other player. 7

As was the case against Arsenal at Wembley, the German winger couldn’t quite replicate the excellent form he’s displayed as this season has progressed. Shows good technique with both feet but couldn’t use it to make things happen in attack. 5

Great chance from De Bruyne's cross early on but hits the foot of the post. Curling shot saved by De Gea and hit another strike over shortly after. Grew into the game as he dropped deeper and his touch became more assured. Sent Sterling through with a good through ball at the end of the first half. Missed a late chance to win the game from Otamendi’s cross. 6

Looked lively late on as City pushed for the winner, but couldn’t find the right pass against a crowded United defence. N/A

Produced one of the biggest cheers of the night as he made his return from injury. Booked for a late challenge on Rashford. Had the ball in the back of the net in injury time but was offside. N/A

Gabriel Jesus making a career out of celebrating offside goals

Made a good stop from Agüero in the first half, diving at full stretch to save and impressively keep hold of the ball. Made another shortly after to tip a Kolarov shot around the post. 7

Another competent performance at full back from the former winger. Maybe Navas will be asking him for a few tips after the game. 7

Tackle of the game on Sane in the first half. Had to get it right in the penalty area and executed it perfectly. It turned out to be the only tackle he made in the game, but he was very solid in the back line, and also made three interceptions. 8

Made some good early tackles on Aguero, causing the striker to drop deeper to try to influence the game. Made nine clearances as Mourinho’s side looked to play it long from the back. 6.5

Lucky to get away with a foul made as Sterling breezed past him early on. Took an arm to the face from Fernandinho, and provided an extra body down the left, making the odd intervention. 6

Played a similar role to Fernandinho, but without the confrontation. Sat in front of the central defensive pairing to help them with and without the ball, and managed to keep De Bruyne’s influence on the game to a minimum. 6

Good early cross which had the City defence at sixes and sevens. Biting tackles in midfield and involved in a tussle with Fernandinho. Should have done better with a far post in the final minute of the first half. Good derby spirit. 6

Mourinho on the sending off: "I spoke with Marouane. He feels like it's a red card because he's Marouane Fellaini." #MUFC #MCIMUN pic.twitter.com/lgNwftHNdc

Asked to be the midfield target man but couldn’t make much stick. Booked in the 83rd minute for a clumsy challenge from behind on Agüero, then shown a straight red on the 84th for headbutting the Argentine. A minute of madness which could have. 3

Able to beat Fernandinho and Zabaleta with ease early on, but was relatively quiet afterwards. 5

Had Kolarov for pace down the right, and troubled Otamendi similarly once he moved into the middle. One flick past the Argentinian centre back demonstrated the box of tricks at his disposal. Had fewer touches than any other player on the pitch with just 28, and had United been able to get him more involved the result could have been different. 6.5

Playing as the central attacker, swapped with Rashford. Missed a chance to score following Bravo’s error. Had United’s only shot on target. 6