Liverpool qualified for the Champions League with a 3-0 win over Middlesbrough at Anfield.

Georginio Wijnaldum scored at the end of a nervy, frustrating first-half to alleviate the nerves inside Anfield before Philippe Coutinho and Adam Lallana made sure of the result with second-half goals.

The result means Liverpool finish in fourth ahead of Arsenal and sees them into the Champions League’s play-offs in August.

Here are the player ratings from Anfield: 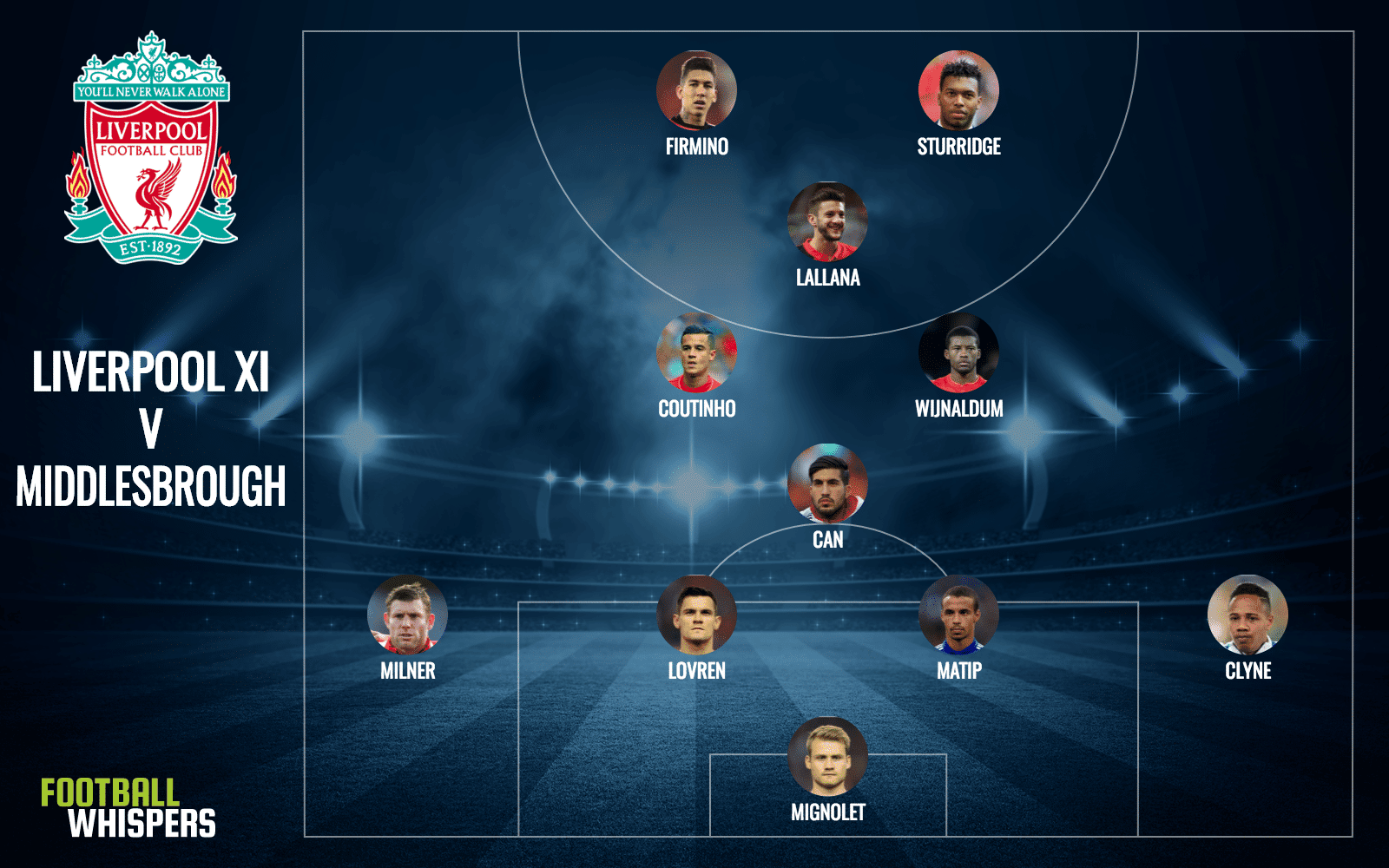 The Belgian was a spectator for much of the afternoon but he won’t be complaining about the lack of a busy day. His side picked up the three points required to reach the top-four and he kept his fourth clean sheet in a row, representing a rock-solid end to the season for the oft-maligned stopper.

The right-back enjoyed taking up an advanced position against Boro’s penned-back defence but he missed the home side’s first genuine opportunity to score, dragging a shot wide from 12 yards.

Cameroonian beanpole was assured in possession, completing more passes than anyone else. He also made two interceptions and one tackle on a relatively comfortable afternoon. Matip has had a solid first season at Anfield, but can expect competition next year with Jürgen Klopp certain to dip into the market for reinforcements.

Never one to settle the supporters’ nerves, the Croatian collided clumsily with Patrick Bamford in the box and must have feared the whistle. Luckily for the centre-half, Martin Atkinson told the striker to get to his feet.

Lovren won three out of his six aerial duels and completed three clearances to help the Reds keep another clean sheet.

The England international capped an impressive individual campaign with another performance packed with dogged perseverance and industry, completing 83% of his passes, while completing two tackles and making one block.

The German midfielder has impressed during the run-in – not least because of his spectacular overhead kick against Watford – and put in another solid shift today, making four ball recoveries and completing 93 per cent of his passes. Boro were certainly not the strongest midfield he’s battled this season, though – greater challenges lie ahead.

The Dutchman got back to his marauding best just as Liverpool fans braced themselves for a nervy second-half. Wijnaldum exploded onto Firmino’s pass with an educated first touch to get the ball out of his feet and allow him to launch the ball high into the net for the all-important opening goal.

The former Newcastle man dictated play in the second-half, too, in commanding fashion.

The Brazilian stepped up once again, delivering in the shape of a free-kick to make it 2-0. However, Coutinho’s influence extended beyond merely finding the net. He completed more take-ons than any other player on the pitch and completed more passes in the attacking third, too.

The playmaker didn’t look to be at his best, particularly when he wasted an excellent chance on the counter-attack, opting to shoot speculatively when he had options either side of him. However, he redeemed himself in spectacular fashion by scoring with a fine left-footed finish to make it 3-0.

The striker, quite possibly performing his Anfield swansong, was on the periphery of the first-half as Liverpool laboured going forward. His first chance was of his own making, twisting and turning before curling a right-footed shot just wide. This may have been his last appearance in a Red shirt.

Was quiet up until the stroke of half-time when he created the opportunity from which Wijnaldum scored with a deftly-judged pass to take two defenders out of the game. Another moment of genuine class and quality – that’s why players cost a lot of money. 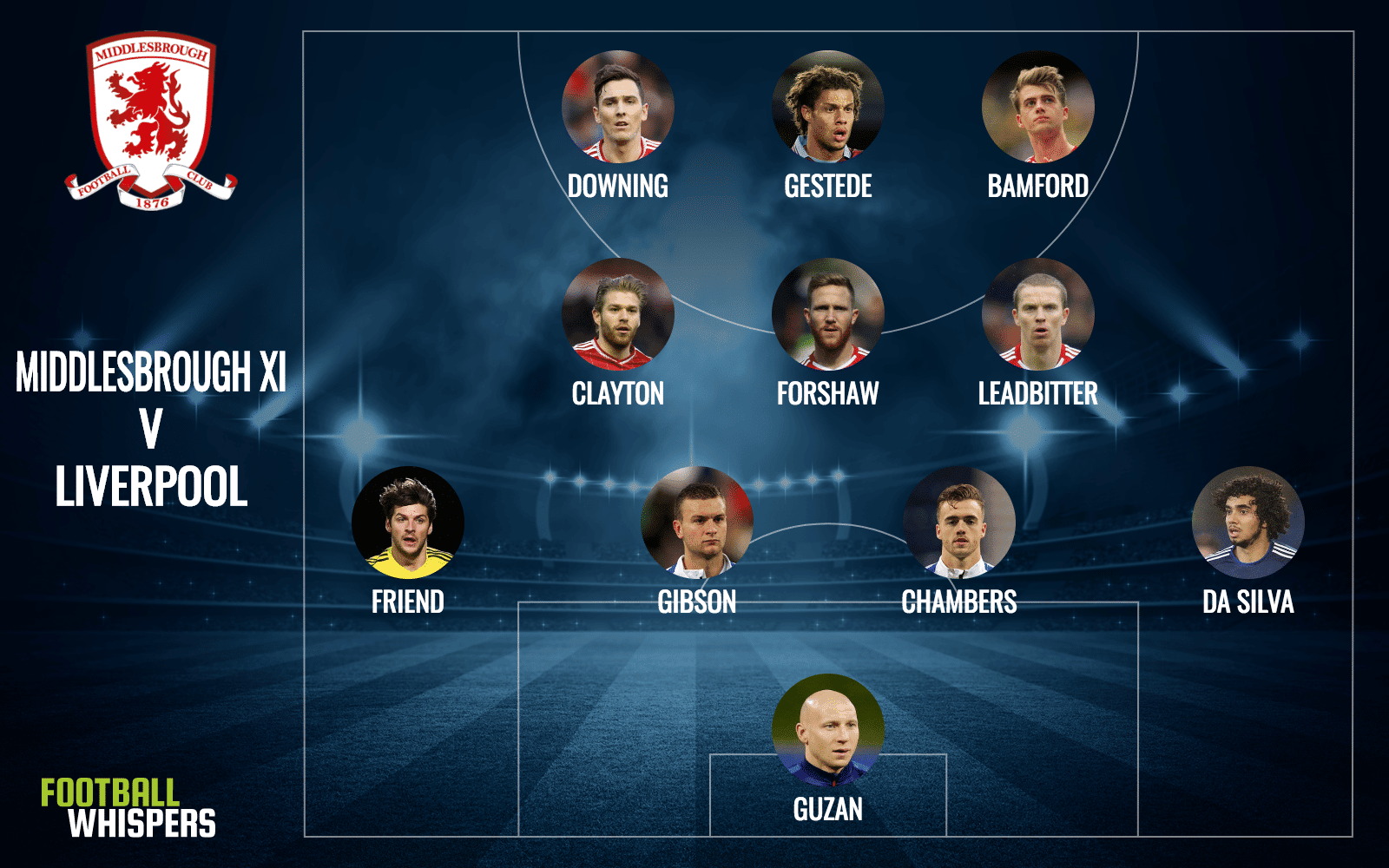 A disappointing end to his Premier League career, assuming he doesn’t return, as he was forced to pick the ball out of the net three times. However, the American perhaps should have done better with Coutinho’s free-kick even though the ball was curling away from him.

The Brazilian left-back made six clearances and looked solid in the first-half but he was powerless to stop Liverpool getting what they wanted. Boro could probably do with an upgrade on the former Manchester United man.

The centre-half played his last game before his loan expires and he returns to his parent club Arsenal. Made a key intervention in the third minute when he headed away a cross with Sturridge lurking menacingly just behind him.

Showed excellent strength to brush Lallana off the ball just as the Liverpool man broke into the box – a vital interception. However, the 24-year-old was unable to prevent the floodgates from opening, although he perhaps stopped the scoreline from becoming embarrassing, making five clearances and four headed clearances.

The 29-year-old tried to create openings for his team in completing three out of four take-ons. His sense of enterprise wasn’t rewarded, however, as Boro failed to string together too many sequences of meaningful passes. 6

Tasked with being the engine in Boro’s midfield, Clayton found himself overrun regularly on a fairly miserable afternoon. He only managed to successfully land one of his five attempted tackles and only played five forward passes in the entire match.

His sloppy passing prevented Boro from gaining ground on the counter on more than one occasion, highlighting a recurring theme of their season – a lack of pace and cutting edge on the break. The experienced midfielder has enjoyed better seasons than this.

Spurned his side’s best chance when he fumbled an effort after finding his way in behind the back-four. Forshaw was symptomatic of Boro’s ineffectiveness going forward, completing only four of nine passes in the final third. A bit more accuracy may have created a chance or two.

Played a neat one-two with Forshaw which allowed him to get his body between Lovren and the ball and was incensed when he wasn’t rewarded a penalty. Apart from that he was a peripheral figure and didn’t perturb Lovren, or any of the Liverpool defenders.

Without Alvaro Negredo, the former Aston Villa striker did not do an awful lot to suggest he can regularly lead the line next season. Gestede only managed one shot – off target – and failed to create any chances while his pass success rate of provides insight into his tendency to succumb to sloppy play.

The former Liverpool man put in a commendable shift down the left flank to stop his former club from scoring, ultimately in vain. However, the experienced wide-man could barely get himself on the ball on a hugely frustrating return to Anfield. Several Boro players may not be at the club next season and that includes Downing.