Cristiano Ronaldo scored twice as Real Madrid became the first side to retain the Champions League with a 4-1 win over ten-man Juventus in Cardiff.

It was Ronaldo – now the only player to score in three finals – who put Real ahead after 20 minutes, meeting Dani Carvajal's cut-back from the right and firing past Gianluigi Buffon first time.

However, Juventus levelled seven minutes later when Gonzalo Higuaín laid the ball off for Mario Mandžukic to arrow an overhead kick into the top corner.

Just after the hour Casemiro put Real back in front, thumping home with the aid of deflection from 25 yards. Three minutes later Ronaldo got his second, helping Luka Modrić's cross past Buffon from six yards out.

Zinedine Zidane's side wrapped the win up at the death with substitute Marco Asensio bagging the fourth after Juve substitute Juan Cuadrado had been sent off for two bookings. 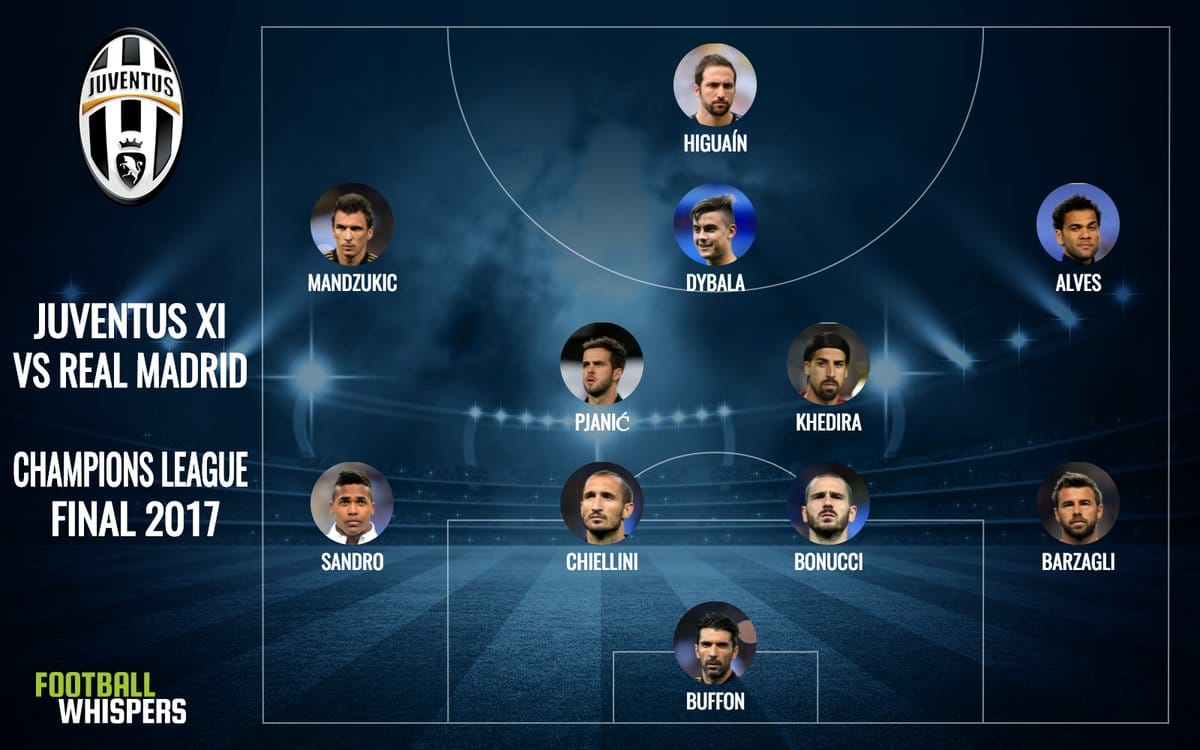 The legendary Italian goalkeeper had not faced a shot of note when he was left to pick the ball out of the Juve net as Ronaldo swept home first time after 20 minutes. He was deceived by a deflection for the second and let down by his usually reliable back four shortly after.

Sacrificed for winger Cuadrado after Real Madrid opened up a two-goal lead, Barzagli was employed in his second position of right-back.

In the first half the Azzurri international was relatively untroubled as Dani Alves halted Marcelo's progress. That all changed in the second period and the Real Madrid left-back's influence grew immeasurably.

Early on the narrative looked to favour of the grizzled Italian centre-half who marshalled Ronaldo and Benzema with minimal fuss – one ill-advised tussle with the Portuguese aside.

But Madrid put the Bianconeri defence under increasing pressure and there was little Chiellini could do. He won his only tackle, made a single interception and completed all six of his attempted clearances.

The Chelsea transfer target had little to deal with in the first half. But that all changed in the second and a rare lapse of concentration by the Italian international was punished as Ronaldo nipped in to meet Modrić's cross and bag the third.

The former Porto defender, like compatriot Marcelo on the other side, was a constant threat going forward. And his gung-ho mentality paid off in fine style when he helped set up Mandžukic's equaliser with a clever volley into the penalty area.

However, he was caught out by Modrić for the second and the opener also came from down his side.

The Bosnian midfielder was unable to get a foothold in the game and when Madrid upped the tempo he was, along with Sami Khedira, unable to give the Juventus back four much protection.

Pjanić was typically economic in his use of the ball but attempted only nine passes in the attacking third and completed just five of those.

The German World Cup winner offered, somewhat surprisingly, more going forward than Pjanić alongside him, completing 13 of the 15 forward passes he attempted. But against Los Blancos' midfield three there was little the former Real Madrid man could do to stem the tide – particularly in the second half.

Directly against his great competitive rival, Marcelo, the former Barcelona star was selected in an advanced role and took great joy in playing as high up the right flank as possible. At times he was level with Juve's number 9, Gonzalo Higuaín, and that was vital in restricting Marcelo's advances.

But in the second half he became lazy and afforded Andrea Barzagli little protection before reverting to right-back when the former was substituted.

This should have been Dybala's chance to cement himself as a future Galáctico. But the Argentine was effectively nullified by Madrid's midfield trio of Casemiro, Modrić and Toni Kroos. The former Palermo man had just one effort, off target, and completed two of his four take-ons.

The big Croatian had toiled away with little success. That was until the 28th minute when he flicked up Gonzalo Higuaín's deft touch into his path and showed great impudence, technique and agility to fire an overhead kick over his shoulder and past the helpless Keylor Navas.

The Argentine, against his former club, very nearly caught out Keylor Navas with a snap-shot after four minutes. But it was something more measured which helped Juve draw level as Higuaín helped the ball into the path of Mandžukić who did the rest.

His reputation as someone who goes missing on the biggest stage will not have been helped with this display as he managed three attempts, hitting the target twice. 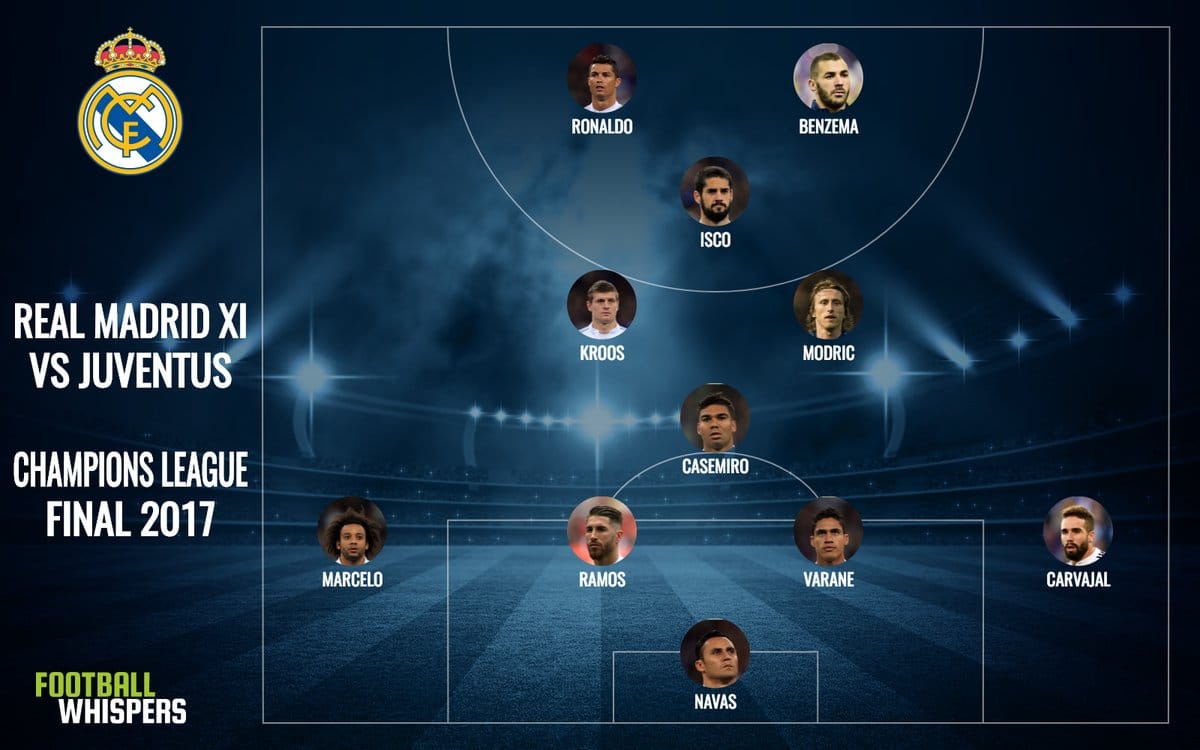 Real's number one did well to get his body behind Higuaín's early snap-shot and was down equally sharply to push out Miralem Pjanić's fierce half volley a few moments later. There was, however, nothing the 30-year-old could do to prevent Mandžukic's moment of brilliance to level the score.

In the early moments the right-back was pegged back by Juventus' left-wing axis of Alex Sandro and Mandžukić. But when he was finally able to foray forward his contribution was telling, pulling the ball back for Ronaldo to slam past Buffon.

The Real Madrid skipper was walking a disciplinary tightrope from the moment he picked up a 30th-minute caution for a scuffle near halfway. To the surprise of most, he came through 90 minutes unscathed and marshalled a Real back four which was solid throughout.

Save for one untidy tussle with Mandžukić in the first half the Frenchman had little to do. Varane won all three of the tackles he attempted, made two interceptions, two blocks and completed each of his three clearances.

Up against Brazil team-mate Dani Alves, it was the Juve man who came out on top in the battle of Samba full-backs. Marcelo enjoyed a few forward ventures in the first half but had to remain mindful of the former Barcelona man.

That all changed in the second half. Marcelo, like Real, got on top and as he put Juventus under increasing pressure his side moved into a two-goal lead. The Brazilian is criminally underrated for his offensive output.

The Brazilian would have been one of the longest-priced scorers for the final with the bookmakers. Prior to this season he'd scored just once for Real Madrid. Now he has six goals this season in all competitions. But none – possibly ever – come close to this. With the game tied at 1-1 Casemiro let fly from 25 yards with a rasping drive which nicked off of Khedira to leave Buffon helpless.

The former Tottenham Hotspur playmaker's lung-busting run brilliantly set up Ronaldo's second. Having got behind Alex Sandro the diminutive Croatian fired an inviting cross into the middle where Ronaldo got the better of Leonardo Bonucci to score.

The German metronome's influence grow hugely in the second half as Madrid, who had dominated the ball in the first half anyway, took the game to the Serie A champions.

Kroos was unflashy as ever but kept the ball moving and always offered and option to the man in possession, receiving the ball on 58 occasions – comfortably more than Modrić and Casemiro alongside him.

Zidane's starting XI picked itself with the inclusion of Isco over a partially-fit Gareth Bale the one ‘big' call for the Real Madrid coach. In the event the Spaniard failed to justify his boss' decision. He was virtually anonymous in the first half and contributed little defensively.

But as Madrid were able to play deeper and deeper in Juventus' third Isco became increasingly threatening, picking up the ball between the defensive and midfield lines and trying to link the play.

Ronaldo had been quiet, almost eerily so, in the opening 20 minutes. Then, just as Juventus had been lulled into a false sense of security, the Portuguese met Carvajal's pull-back from the right to tuck home his 104th Champions League goal, becoming the first player in the Champions League era to score in three rivals.

He almost disappeared from view again until the 64th minute, ghosting in behind Bonucci to score the killer third. A hat-trick just eluded him but this was another Ronaldo final.

The Frenchman will never get the plaudits he deserves but that is par for the course when you share a frontline with Ronaldo.

Benzema worked hard, moving into the channels or coming short to aid the Portuguese superstar who received three passes from Los Blancos' No.9. Marcelo and Isco were the biggest beneficiaries of his selfless work, though, collecting four passes apiece.