Manchester City kicked their Premier League campaign off with a bang away to newly promoted Brighton and Hove Albion. Pep Guardiola’s men won 2-0 thanks to a second half Sergio Aguero strike and an own goal from Lewis Dunk.

Chris Hughton will have been impressed with his side despite the defeat – they competed for large spells, defended exceptionally and threatened occasionally on the counter-attack. But ultimately their visitors had too much class.

Here we’ve rated the players, with each rating out of ten.

The Aussie had plenty of work to do on his Brighton debut, making several important stops to keep his team in the game. There wasn’t a lot he could have done for either goal, and he appeared calm under the constant scrutiny. 7

The experienced Spaniard put in a solid display at right-back for Hughton’s side. He put in a number of well-timed tackles, did his defensive duties, and didn’t put a foot wrong all game. 7

Threatened with a vicious strike following a corner kick early in the second half, and didn’t make any glaring errors at the back. 5

Made a slight error that allowed Aguero in, but fortunately the Argentine fired wide. Also nodded a cross into his own net to give City their 2-0 lead. However, he defended well apart from those small mistakes. He also produced a few sublime, searching long-range passes to set his side off on the counter-attack. 6 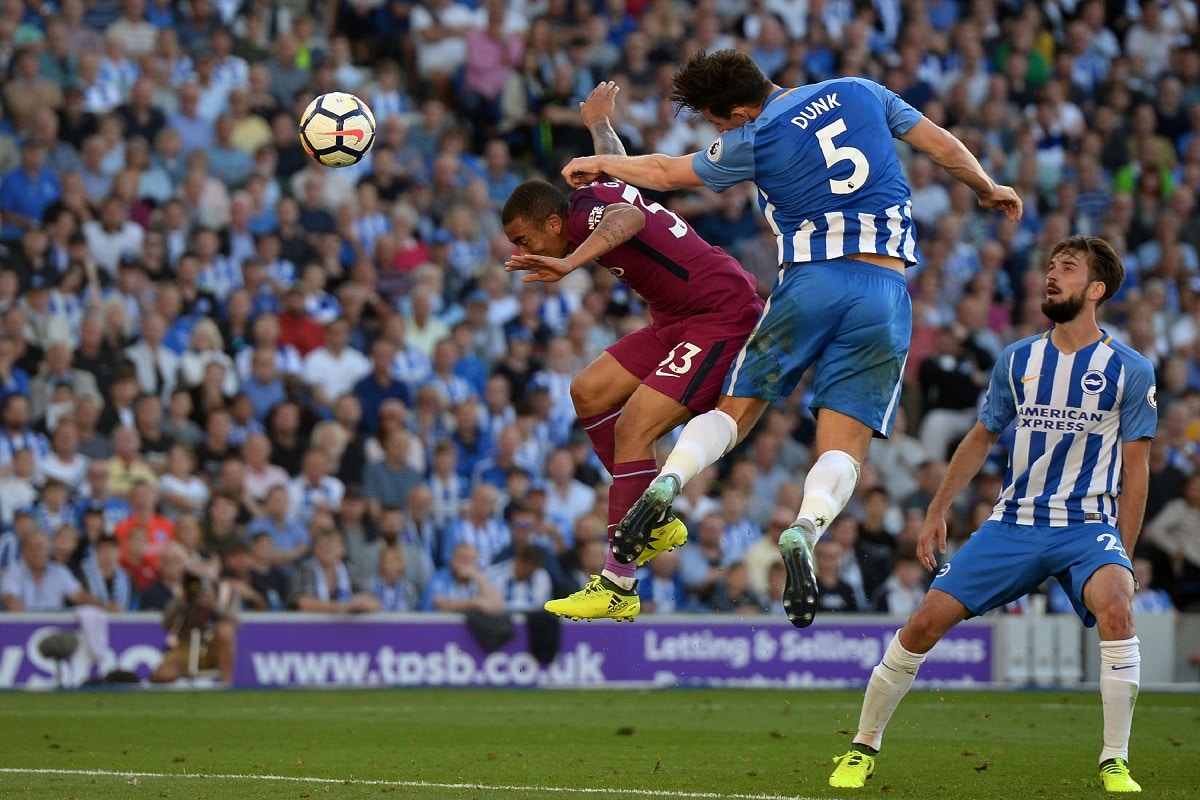 A quiet Premier League debut for the Austrian left-back, who had his hands full defensively with the attacking intent and pace of Kyle Walker. Got forward every now and then, but didn’t do much with his crossing opportunities. 5

Showed some nice touches in the first half and gave brief evidence of his pace in attack, but his influence was limited by his team’s defensive tactics. 5

Put in a shift in central midfield, running ceaselessly and pressing well. Wasn’t afraid to let Manchester City players feel his presence, but offered little on the ball. Gave away possession in the lead-up to the visitors’ second goal. 5

Took his time to settle on his Premier League debut, but the Dutchman showed a quality on the ball that – Dunk aside – was lacking in Brighton’s line-up. Got lucky having given away possession a few times in the first half, but his touch and composure under scrutiny helped his side build counter-attacks. There’s lots more to come from him. 6

Got injured early on and was therefore unable to make much of an impact. Taken off after 24 minutes, he may have been secretly disappointed to watch his replacement, Jamie Murphy, perform well. 5

There were plenty of eyes on the German, who came to Brighton with a good reputation. However, he failed to make an impression on this match in an attacking sense. Defensively, he can be commended for his positioning and work ethic, which disjointed City’s build-up for large spells. 5

Along with Gross, formed a solid first line of defence for Brighton. The Israeli was also targeted several times on the counter, but lacked the pace or skill to seriously unsettle a high City back line. 5

Looked a safer pair of hands than Claudio Bravo, although one dropped cross from a corner kick won’t give City fans much confidence. He did, however, look relatively calm whenever the shots rained down on him around the hour mark. 5

The Belgian strolled through the game, with very little to test him. Had to make one important clearance, but he will face far more taxing forward lines this season. 5

Sitting at the heart of City’s defensive diamond, Stones acted as the team’s key distributor from the back. He took to the role well, passing simply and effectively. Occasionally, he made riskier vertical passes or took Fernandinho’s place in midfield. 6

The Argentine centre-back still doesn’t convince on the ball, and he wasn’t able to attack the Brighton defensive block in the way that was at times necessary. 5

Acted as the sole central midfielder in City’s 3-1-4-2 system, but didn’t do enough on the ball to justify retaining his place, at least against defensive opposition. Set up the second goal with a cross from the right, but otherwise had a quiet game. 5

Showed everyone why Manchester City were so keen to sign him this summer, with a number of forward forays down the right flank. He caused Brighton trouble with his dribbling and athleticism, while his crossing was good. A positive start to his City career. 7

Moved intelligently between the lines, probing and prodding passes through in the hope of breaking Brighton down. Played an important part in the first goal, setting up Aguero with a perfectly weighted pass. The Spanish playmaker was fundamental to his team’s progression of the ball. 8

Constantly looked to make things happen when the ball came his way, but was generally stifled by a sound Brighton defence. 6

The Brazilian played on the left wing, but didn’t offer enough going forward. Naturally right-footed, he had to fight the urge to come inside constantly. Held his position well, but a lack of quality on the ball was apparent at times. 5 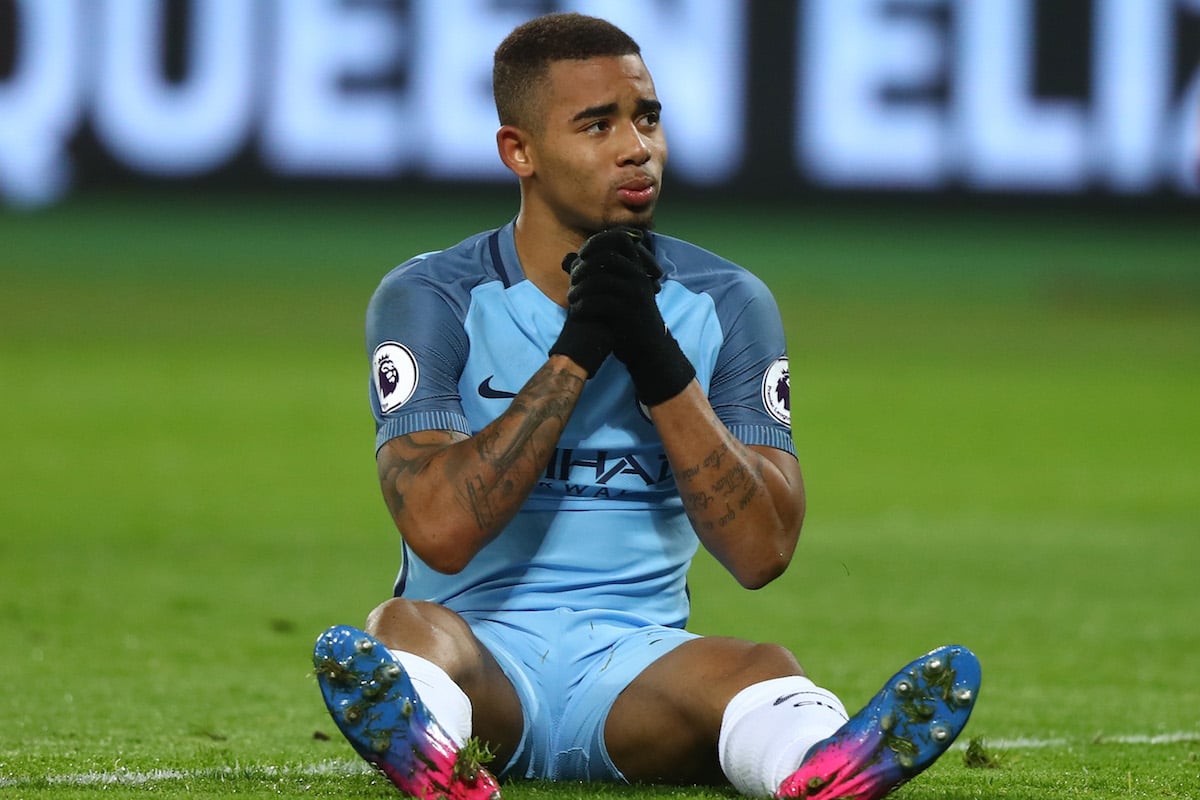 He had two goals chalked off in what was a frustrating evening. His first strike touched his hand before finding the net; his second was ruled out for offside. That disallowed brace aside, the forward didn’t do much against a deep defensive line. 5

His hold up play was good – he always held onto the ball and brought team-mates into play, using his body well. He also scored the crucial opening goal, firing beyond the imperious Ryan. However, City will want a little bit more from the striker going forward. 6