Chelsea ensured Tottenham Hotspur's joy at closing the gap at the Premier League summit was short lived, breezing to a 3-1 win over Bournemouth in Saturday's late kick off.

Spurs reduced the Blues' lead to four points with a 4-0 win over Watford at lunch time. However, Antonio Conte's side re-opened a seven-point jump with an own goal from Adam Smith, followed by strikes from Eden Hazard and Marcos Alonso. 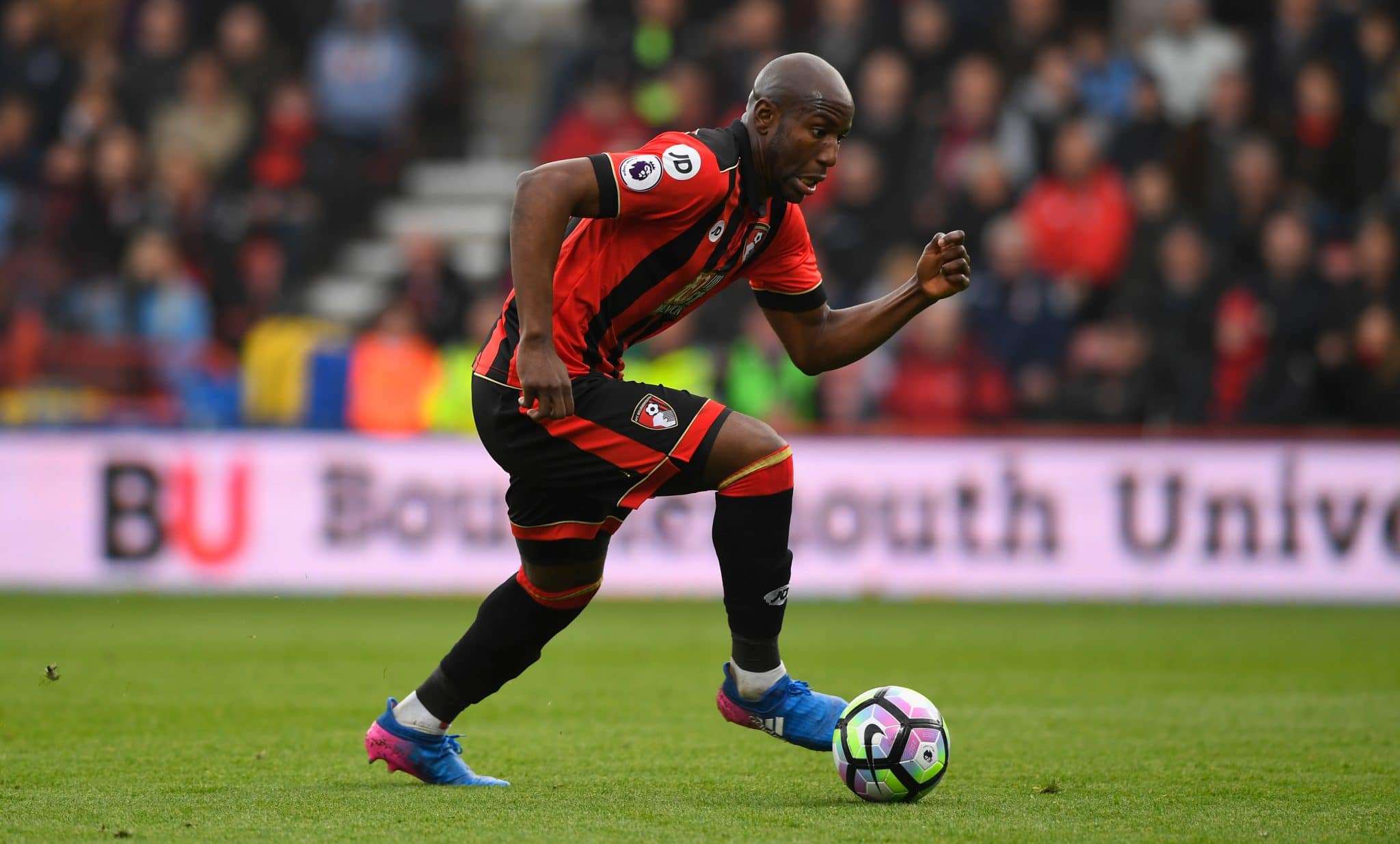 NOW READ: WHY CHELSEA MADE A MISTAKE RECALLING NATHAN AKE

Artur Boruc – There was little the Polish stopper could do about any of Chelsea's goals. Betrayed by a bizarre deflection for the first and rounded by Hazard for the second, Boruc was a spectator for Alonso's sumptuous third. 6

Adam Smith – The full-back was somewhat unfortunate to get the last touch to Diego Costa's opener for Chelsea. But the former Tottenham Hotspur youngster was caught out of position and left for dead when Hazard sprinted away to bag the Blues’ second. 5

Simon Francis – Looked every inch a full-back playing centre-half when affording Costa the freedom of Bournemouth to hack home Chelsea opener with a heavy deflection off of defensive colleague Smith. 5

Steve Cook – The bruising centre-half competed physically with Costa and marshalled a Bournemouth defence which was scarcely picked apart by the title hopefuls. 6

Charlie Daniels – One of the most attack-minded full-backs in the Premier League, Daniels was always up against it in going toe-to-toe with Chelsea’s irrepressible wing-back Victor Moses.

It looked as though he might get some joy early on, motoring past the Nigerian only to be hauled down and earn his opposite marker a booking. He was his side's main attacking outlet, though, completing both crosses he attempted. 6.5

Ryan Fraser – The winger, who spent last season on loan in the Championship, supplied the pass for Benik Afobe’s first-half strike and very nearly dragged Eddie Howe’s side level five minutes after the break, drilling agonisingly wide of Courtois’ far post with a firm strike. His impact waned, however. 5.5

Harry Arter – Perhaps one of the most underrated central midfielders in the Premier League. Arter, like Wilshere next to him, was neat and tidy in possession and always looked to play forward. He was one of Bournemouth's most effective players in the final third, completing 90 out of 99 passes, while battling manfully against human wrecking ball N'Golo Kanté. 6.5

Jack Wilshere – There was a moment early in the second half when the past collided with the present as Wilshere was upended by Kanté who, in typical Kanté fashion, had made up several yards in a split second to close down the dithering Arsenal loanee.

The England international was positive in possession for the hosts, though, completing 87.2 per cent of his passes and worked hard in the midfield to complete 11 recoveries – second only to Nemanja Matic. 6.5

Marc Pugh – The winger was found wanting up against Cesar Azpilicueta, failing to complete any of his three take ons and not mustering a single cross before being withdrawn with 20 minutes remaining. 5

Benik Afobe – The former Arsenal youngster missed a gilt-edged chance at the most important time in the game, minutes after Hazard had doubled the Blues’ lead. However, Afobe – who is only behind Zlatan Ibrahimović for wasting clear-cut chances in the Premier League – struck the post with his volley from a great position. 6.5

Josh King – The Norwegian international got the Cherries back into the contest with his 10th goal in his last 11 Premier League games, arrowing past the insight Thibaut Courtois with a deflected shot just before half time. Only Romelu Lukaku have now scored more than King in the Premier League in 2017. 6.5 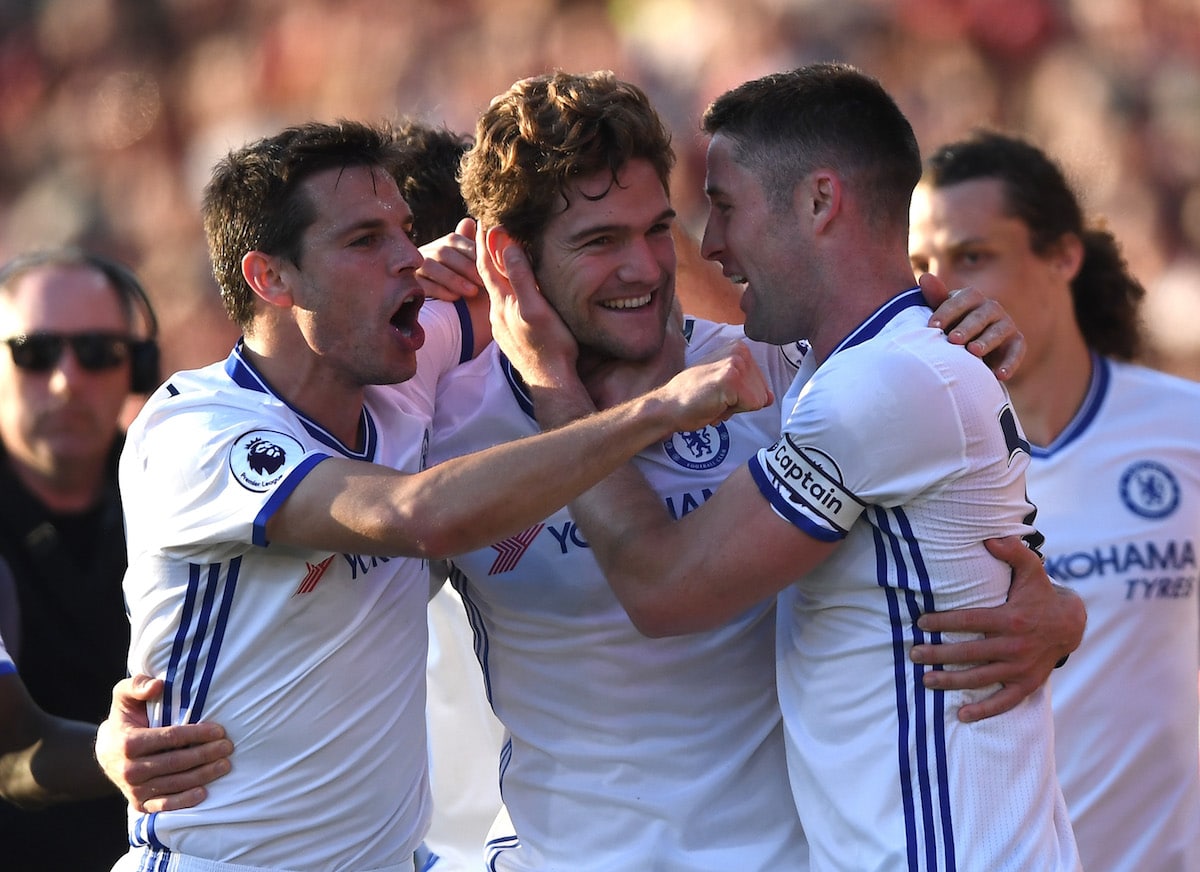 Thibaut Courtois – There was nothing the big Belgian stopper could do with Josh King’s goal for the hosts; the ball taking an unhelpful nick off of Blues defender David Luiz to leave Courtois grasping at thin air. Early on he had reacted sharply to push Luiz's mis-cued volley away. Apart from that he had next to nothing to do. 6

Cesar Azpilicueta – Chelsea's Steady Eddie was just that, once again. Azpilicueta completed 92 per cent of his passes while helping keep Marc Pugh and Daniels in check down the Cherries' left by winning all four of his tackles, both of his aerial duels and making one interception and one block.

If Conte deserves credit for reinventing Moses as a wing-back then some is due for turning Azpilicueta from a makeshift left-back to a solid centre-half. 7

David Luiz – Gone are the days where you couldn't help but notice Luiz. The Brazilian is a model of consistency and solidity these days. As Chelsea tick off the wins en-route to their fifth Premier League title the Brazilian's maturity is apparent, helping marshal a defence which was never breached after Afobe's strike. His one blip was the volley towards his own goal early on which Courtois pushed to safety. 7

Gary Cahill – The Chelsea skipper did not win a single tackle in 90 minutes. But he didn't have to. His positioning was good and with seven clearances completed from seven, all four of his aerial duels won, two blocks and an interception, he kept things tight. There were a couple of nervy moments on the ball and he might have done better for Afobe's goal. 7

Victor Moses – This season’s renaissance man was given the freedom of the right-hand side in the first half and always offered an out ball for Chelsea. His tussle with the attack-minded Charlie Daniels was interesting with the Bournemouth man getting at Moses defensively. 7.5

N’Golo Kanté – Speaking at half time as a pundit on BT Sport, former Bournemouth boss Harry Redknapp said the midfielder’s pass for Hazard’s goal was reminiscent of Cesc Fabregas. And the former Tottenham Hotspur manager was not wrong. It was a sumptuous delivery which took out a handful of Cherries defenders and carved the hosts open. 7

Nemanja Matic – Alongside Kanté the Serbian was the safety pin in the Blues’ midfield, sitting deeper and allowing the workaholic Frenchman to scurry around and win the ball in front of him. Matic recovered possession for Conte’s men on 14 occasions and recycled possession intelligently. 7

Marcos Alonso – Much like Victor Moses on the opposite flank the Spaniard was a menace and ensured Bournemouth right-back Adam Smith knew he was in a game.

The former Fiorentina man should have bagged an assist early in the second half, too, when his low cross found Costa who somehow contrived to miss the target from a matter of inches out.

The wing-back took matters into his own hands by scoring the third, whipping an inch-perfect free-kick into the top left-hand corner of Artur Boruc's goal to settle the tie – his fifth goal of a remarkable season. 8

Eden Hazard – The Belgian continues to dazzle; his goal giving the west Londoners breathing space at 2-0 and displaying no little poise and presence of mind to round Cherries keeper Boruc before sliding the ball into the empty net. Everything good that Chelsea did came through the maverick attacker who was a constant thorn in the hosts’ side and linked up well with Alonso behind him. 8

Diego Costa – Before today Costa had never gone four Premier League games without scoring. At full time that was still the case – somehow.

The Spaniard should have opened the scoring but fluffed his lines and was grateful to Smith's intervention. A second bite at the cherry arrived 10 minutes into the second half from Alonso's whipped low cross. But, again, Costa got his feet in a mess and failed to punish the hosts from point-blank range.

Everything was there except a goal. 7

Pedro – The quietest of Chelsea's front three, the Spaniard might have won a penalty on another day when he sat Smith down with a chop only for the sliding defender to take the ball away from him. Referee Andre Marriner ruled it was accidental, however.

He has had more effective days but, with Hazard in effervescent form, he didn't need to be at his best. 6.5