Arsenal and Manchester City played out a 2-2 draw at the Emirates Stadium as both sides failed to apply pressure on the sides above them in the Premier League table. 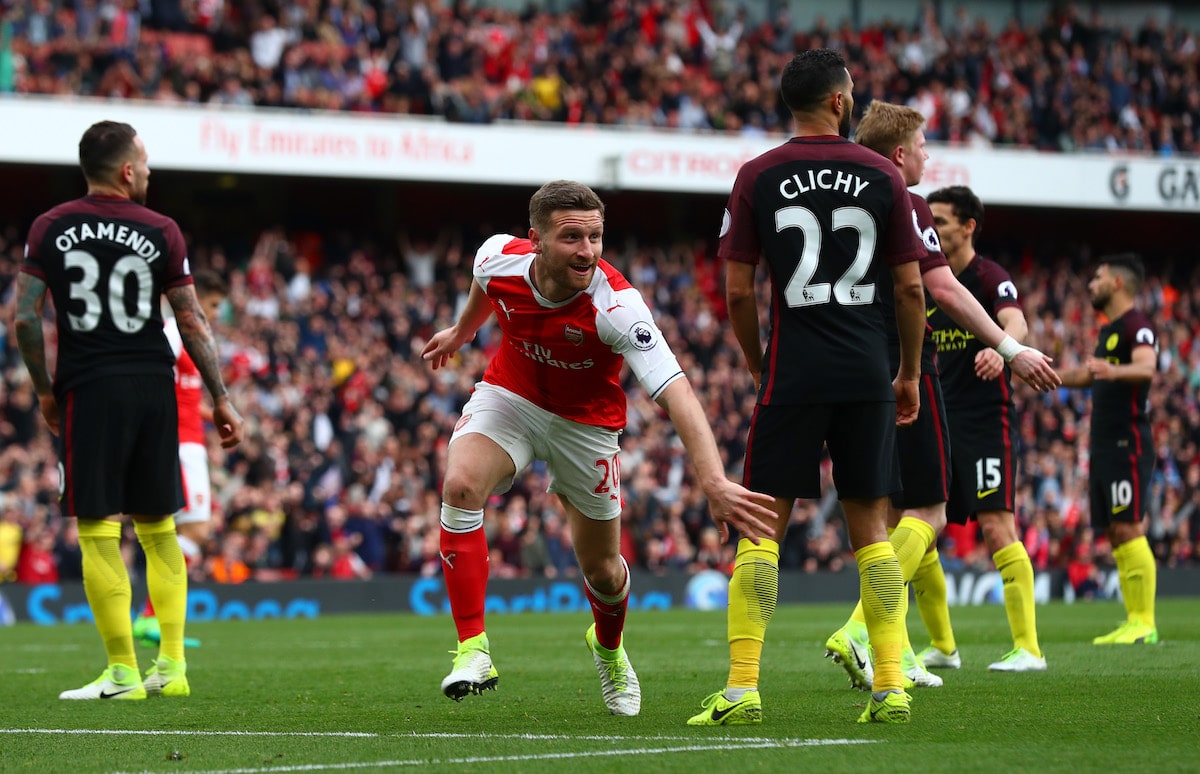 David Ospina – Did well to deny Sterling when he raced off his line quickly to deny the forward early on and was helpless in both goals, undone by Sane’s pace for the first and beaten by the sheer ferocity in Aguero’s strike for the second. Made a smart save to deny Fernandinho’s drilled effort in the second-half too. 6

Hector Bellerin – Once again, the Spaniard's shortcomings as a defender were exposed as he allowed Sane to get inside of him for the opener. The right-back will shudder when he sees a replay. 5

Shkodran Mustafi – Scored the second equaliser with a towering header, beating Otamendi in the air to glance his effort expertly past Caballero. Traditionally, we don’t associate Arsenal with aerial prowess but that was there 14th headed goal of the season, bringing them level with West Brom for the most. 7

Laurent Koscielny – Came off at half-time with an achilles injury. Looked to be the only comfortable Arsenal defender in the first-half and the Frenchman would have been furious when Ozil undid his fine defensive work by giving the ball away for the second goal. 6

Nacho Monreal – Struggled defensively at times but very dangerous going forward, especially when linking up with Sanchez. It was that combination with the Chilean that led to Monreal’s cross being headed behind for the corner that led to their second goal. 6

Francis Coquelin – Had a decent game in the middle, showing his work ethic in pressing City and winning the ball back high up the pitch. He did receive his customary booking, of course, and was perhaps lucky to escape a second when he hauled De Bruyne down to prevent a City break. 6

Theo Walcott – Drifted through the first-half anonymously and was lucky to escape punishment for a nasty tackle on Sterling, but beat the offside trap and got the better of Clichy to equalise just before half-time. Came close to a second when he fired just over from Sanchez’s cross. Overall, he was largely ineffective, which is why it was understandable that he subbed off. 6

Mesut Ozil – Didn’t cover himself in glory when he squandered possession not far out from his own box that led directly to City’s second. Redeemed himself somewhat though by delivering the corner onto Mustafi’s head for the second goal. The German playmaker failed to capitalise on Otamendi’s mistake though when he should have stolen in before Caballero and score Arsenal’s third. 6

Danny Welbeck – Was lively and eager, but not with much effect. The closest he came to a goal was when he slid in to block a clearance and the ball cannoned off his leg and just wide. Mostly marked out of the game by Stones, though, who kept close tabs on the former Manchester United striker. 5

Alexis Sanchez – Curled one decent effort just wide and was regularly involved for Arsenal, particularly when he bamboozled Navas and chipped a pinpoint cross into Walcott, who fired over. Seemed to be the only player whose sense of urgency didn’t drop following Arsenal’s second goal and was guilty of trying to force the issue on one or two occasions. 6 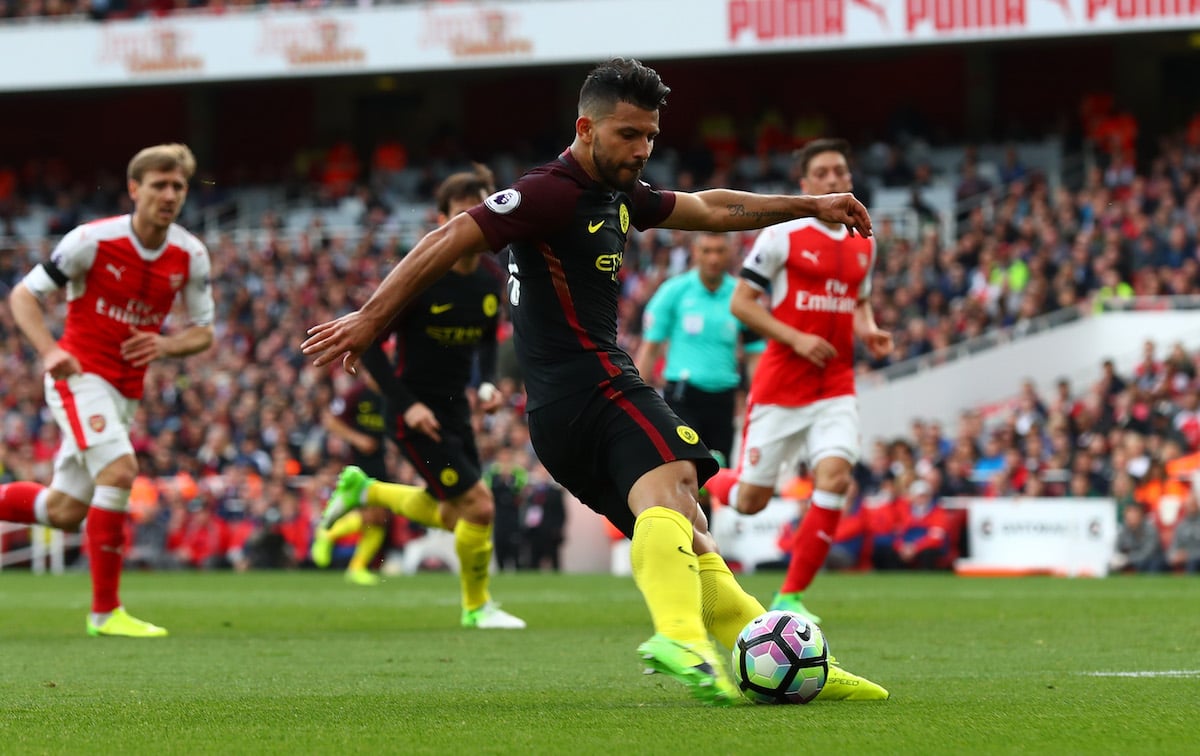 Willy Caballero – Didn’t have much to do apart from pick the ball out of the net twice. Arsenal didn’t test the keeper consistently and there wasn’t much he could have done about either goal. 6

Fernandinho – Made a wonderful last-ditch tackle to deny Sanchez a clear scoring opportunity, reminding everyone why Guardiola has such a high opinion of him. Was solid overall. 7

John Stones – Defended stoutly at times up against Sanchez and Welbeck, the latter of whom he really kept quiet. He still has a long way to go to match the leadership and organisational abilities of Vincent Kompany, though, but this was a solid performance under his belt. 7

Nicolas Otamendi – Was late in reacting to the corner, allowing Mustafi to steal a yard and jump in front of him. Disappointing from the Argentine as he’s usually effective in dealing with those situations. Was spared his blushes when his miscued touch almost allowed Ozil in. 5

Gael Clichy – Lacked conviction when he came up against Walcott, failing to clear, land a clean tackle and allow the Arsenal man to equalise after initially playing him onside. Not the left-back’s greatest moment. 5

Jesus Navas – Started the game as a surprise right-back and was booked for a shocking challenge after just five minutes. Continued to struggle up against Sanchez, thus highlighting City’s need for full-back upgrades in the summer. Delivered some good crosses going forward, though, which is what Guardiola would have been hoping for as an extra attacking outlet. 6

Kevin De Bruyne – We’ll never truly know if he intended the pass for Sane’s opener but, given his creative capacity, I’m going to operate on the belief that he did, so it was an excellent assist from the Belgian, his 11th in the league this season. Five minutes later, he was denied a fantastic goal by the woodwork (he’s now hit the woodwork eight times this season). 7

David Silva – Showed creative panache to play in Aguero for the second goal but certainly wasn’t involved as prominently as he has been recently. Perhaps feeling a little fatigued after playing twice for Spain during the international break. 6

Leroy Sane – Tucked away the opener brilliantly, keeping his balance and composure under pressure from Bellerin to round Ospina and slot home into the empty net. Constantly positive in possession, looking to drive forward and take on Bellerin, often succeeding. It looks like he’s continuing to improve week by week, which is hugely encouraging for City supporters going into next season. 7

Raheem Sterling – The winger didn’t sparkle and was comfortably outshone by his teammates. Perhaps not 100%, but came off at half-time for Yaya Toure as part of a shuffle that saw De Bruyne move to the right wing. 5

Sergio Aguero – Wasn’t seen much until he responded to Arsenal’s equaliser to restore City’s lead with a characteristically deadly finish from a tight angle. Also missed a couple of headed chances and should have done better from both. 6