It certainly wasn't entertaining but for Arsenal it was enough. The Gunners' 0-0 draw at home to Red Star Belgrade secured their place in the Europa League knockout stages where, perhaps, Arséne Wenger may take the competition a little more seriously.

The opening four games of the Europa League have seen the Arsenal boss heavily rotate his side, and it's certainly paid off with the Gunners qualifying from their group with two games spare.

But bigger challenges will come in the knockout stage. And given the prize on offer at the end of the competition is Champions League qualification, Wenger may decide the Europa League is more than just an opportunity to test a few young players and give those on the fringes some game time.

While this evening's match at the Emirates won't live long in the memory, it was another chance to evaluate the forgotten men and those with bright futures in the game.

Our player ratings are below. Let us know your thoughts from Arsenal's players by tweeting us at @fb_whispers.

The 23-year-old goalkeeper was handed only his second first-team appearance by Wenger and he certainly didn't let the Gunners down.

There were perhaps a few nerves early into the contest and one poor clearance could've been costly were it not for Rob Holding making a smart interception. However, as the game progressed, Macey improved.

His stand-out moment was an excellent one-handed save in the opening period. Red Star centre-back Vujadin Savic, once of Watford, attempted to loop a header over the goalkeeper but he got a touch on the ball and tipped it onto the bar.

From the following corner, he demonstrated his growing confidence by coming out and comfortably collecting the cross.

Macey was largely a bystander in the second period. He had to make one save from Richmond Boakye but it was routine.

With David Ospina recovering from injury, Macey may not get another chance for Arsenal this season, but he has a clean-sheet to his name and it was well deserved.

It was only the fourth time the Frenchman has featured for Arsenal since the start of last season and he understandably looked a little rusty.

There were occasions when Debuchy appeared sluggish when chasing back and that can largely be put down to his lack of match fitness, especially given the full-back is now 32 years old.

But the former Newcastle United defender's know-how hasn't waned and there was one important interception in the first half that denied the visitors a clear opportunity on goal.

He was also effective with the ball. No Arsenal player attempted more passes than his 93, of which 83.9 per cent found a team-mate. Add in his team-high six clearances and two tackles and it was a solid performance from Debuchy.

The Egyptian midfielder was used at centre-back – an experiment that first started in pre-season – and while he was solid, his lack of defensive awareness was exposed on more than one occasion.

In the opening period Elneny failed to track a run from Boakye and it led to Red Star's best chance of the game. Fortunately for the hosts, the Ghanian blazed his shot wide.

With the ball Elneny was far more assured and his presence in the heart of Arsenal's three-man defence allowed attacks to be easily started from deep. He attempted 78 passes during the contest, 85.9 per cent of which were completed.

The England Under-21 international was impressive in several games last season, including the FA Cup final win against Chelsea, but his second campaign at the Emirates has started slowly.

He's been in and out the side in the Premier League but has featured in every one of Arsenal's European games. And against Red Star, Holding produced a performance that was unspectacular but solid.

He helped out Macey early on by winning the ball back after a poor clearance by the goalkeeper and was largely untroubled for the remainder of the game – he made three tackles and four interceptions.

Holding could've snatched victory for Arsenal late on from a corner, but he misjudged the flight of the ball and headed a presentable opportunity wide. 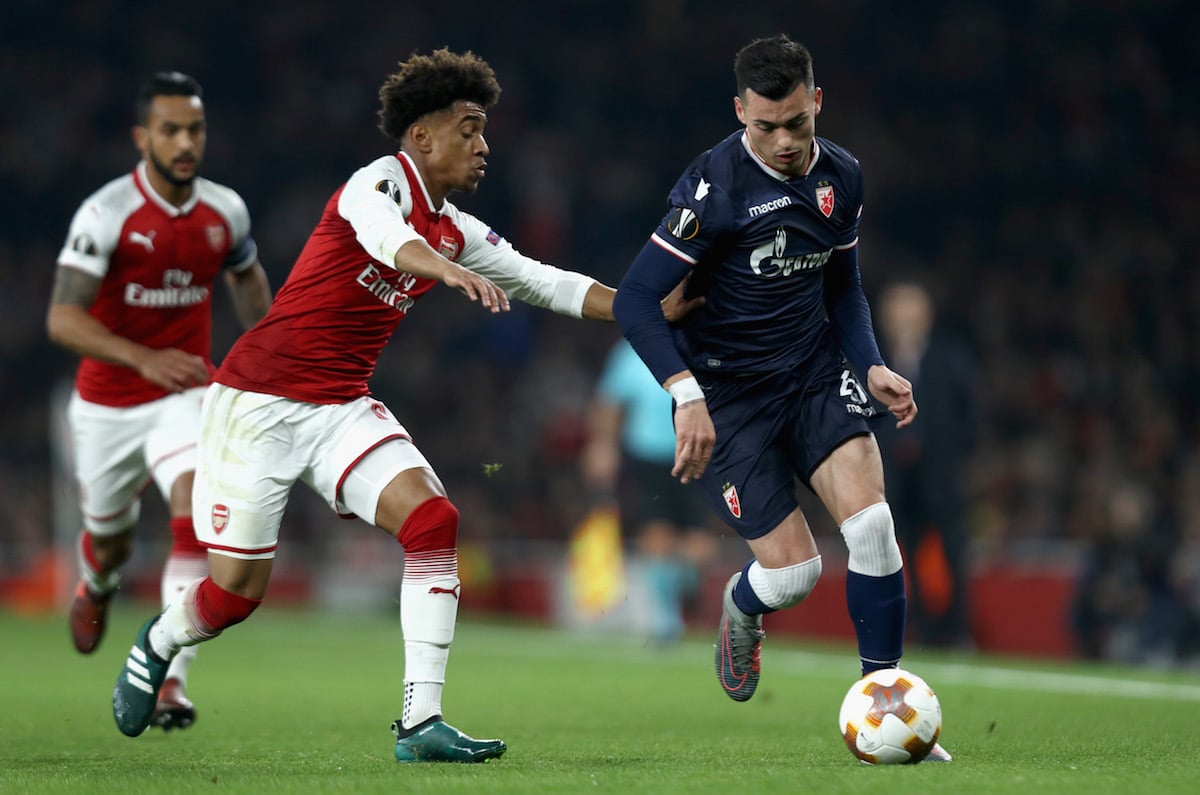 The 17-year-old was used out of position at right wing-back but had little defensive work to do. He was quiet in the first half, though, as the majority of Arsenal attacks came down the left flank.

Nelson was more involved in the second period and two powerful runs forward lifted the crowd, but failed to create a chance.

He ended the game having completed two dribbles and two crosses and showed he can defend by making three tackles, three interceptions and two clearances.

It certainly wasn't the most eye-catching of the teenager's Arsenal performances, but it's another 90 minutes of senior football under his belt which should stand him in good stead.

It's in games like this, when the Frenchman is one of the most senior Arsenal players on the pitch, that Coquelin should be dictating the game and guiding his younger team-mates through. Instead, he was the quietest of Arsenal's midfielders.

Yes, he kept possession ticking over and won his share of tackles (3) but Arsenal fans can rightly demand more from a player who has made over 150 appearances for the first-team.

One late half-volley, which he shanked well wide, epitomised his performance against Red Star; unimpressive.

Appearance number five for the 18-year-old midfielder and with every game he is improving and looking more confident.

In the opening period Willock was the pick of Arsenal's midfield. He was always in space to receive a pass and was comfortable in possession, completing 85.7 per cent of his passes in the first half.

One almost led to an opening goal. He won possession in Red Star's defensive third, advanced on goal and slipped a pass to Olivier Giroud. The striker waited for the ball so he could take it on his left foot, however, and Milan Borjan denied the Frenchman.

Willock continued to impress in the second period. He helped build a number of Arsenal attacks and broke forward with the ball on more than one occasion.

The one blot on his copybook was a shot from 20 yards that went well wide, Theo Walcott was in a good position and should've been found by Willock.

Like Nelson on the opposite flank, Maitland-Niles was being played out of position at wing-back but was effective in the role.

He teed up a good chance for Giroud in the opening half which was saved and was also involved in the chance which led to Wilshere almost putting Arsenal in front.

His two key passes was only bettered by Jack Wilshere and, while he showed that the defensive side of his game needs refining, he still made two tackles and one interception.

It's been a frustrating season for the winger. He has yet to start a Premier League game for Arsenal and his substitute appearances in the top flight have amounted to 46 minutes.

The League Cup and Europa League have been the only competitions to provide Walcott with game time this season but he is failing to take the chances he given.

He was on the periphery for much of the contest and, when chances did come his way, he failed to make them count.

Having been left out of the England squad earlier in the day, you imagine Wilshere wanted to prove a point to Three Lions boss Gareth Southgate.

The opening half, however, bypassed Wilshere,. He only played 20 passes and completed just three dribbles.

Arsenal have been at their best in the Europa League when Wilshere has been heavily involved in the game. In the second period his influence increased and he moved infield for more often.

The 25-year-old almost broke the deadlock on the hour mark when he clipped a shot past Borjan. But excellent defending from Damien Le Tallec denied the midfielder his first Arsenal goal since May 2015.

Wilshere moved into the centre of midfield in the final 20 minutes and he was the main creative force in the Arsenal side. Wilshere ended the game having played three key passes, the highest of any Gunners player, and having completed five dribbles.

He is not yet ready to be thrown into the Arsenal starting XI against the likes of Manchester City, however, it may be time for Wenger to give Wilshere a chance among the elite members of his squad. 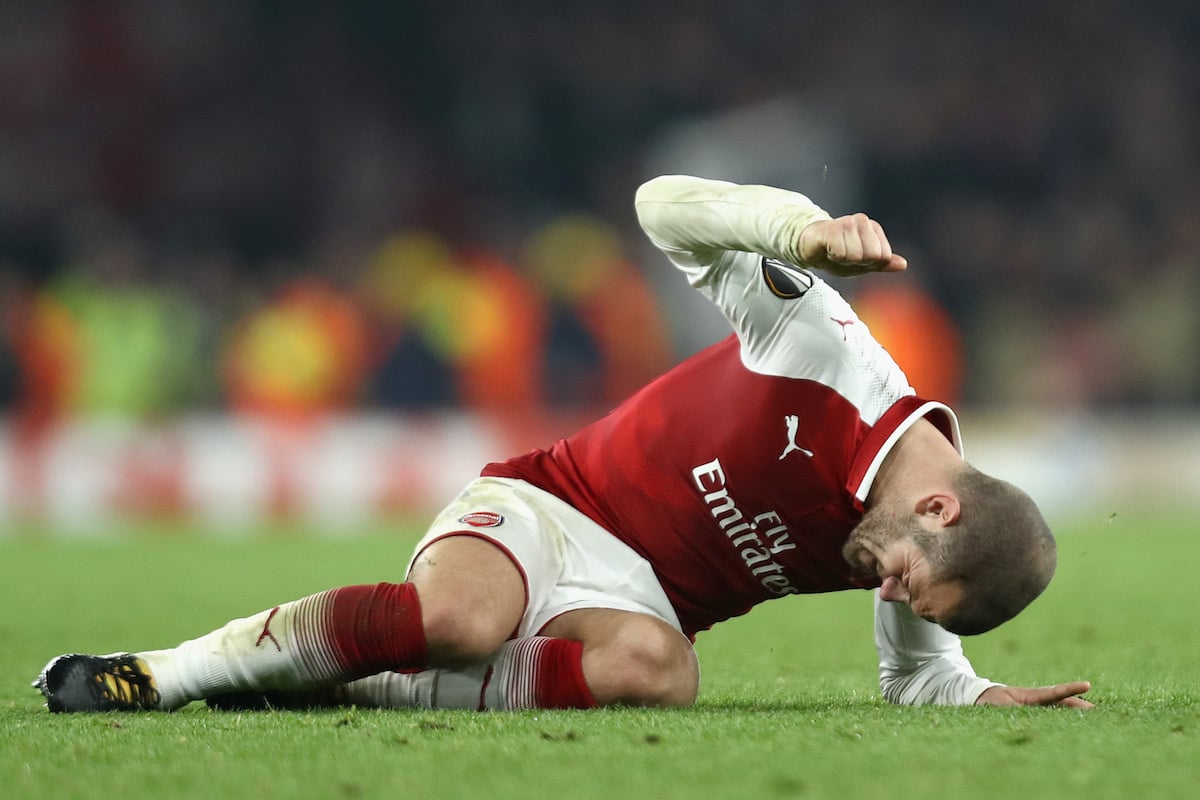 A frustrating evening for the striker. Giroud had two good chances in the opening 45 minutes that were well saved but was living off scraps from then on as Arsenal struggled to break down Red Star's defence.

On several occasions the Gunners got into promising positions down the wing but instead of crossing for the powerful striker, they opted to rotate possession, much to the France international's frustration.

And he was often left isolated up front, a fact highlighted by his passing statistics. Giroud attempted only 25 passes during the game and just over half of them were successful.

Nketiah for Willock (67): Scored two goals on his debut against Norwich in the League Cup but was far quieter against Red Star and didn't register a shot on goal.