When Sunderland's relegation from the Premier League was confirmed in April 2017, rumours of a big move for Jordan Pickford seemed an inevitability.

The young goalkeeper was the sole spark in a thoroughly miserable campaign for the Black Cats. Of course, Pickford wasn't even Sunderland's first-choice at the start of the season.

Initially seen as Vito Mannone's understudy, Pickford seized an opportunity to stake his claim for starting games when the Italian suffered a serious elbow injury and was ruled out for three months.

Just 22, Pickford was highly thought of on Wearside, but despite a burgeoning reputation, fans would have been excused for fearing the worst when the untested goalkeeper was thrown into the Premier League by David Moyes for a trip to Southampton.

It would have seemed as though those fears were well-placed following Pickford's shaky debut. Despite a series of eye-catching saves, Pickford was culpable for the Saints' equaliser, letting a Jay Rodriguez strike wriggle underneath his body.

In his post-match comments, Moyes said Pickford had no reason to be “ashamed.”

As it turned out, the young stopper was anything but, shrugging off his baptism of fire to become Sunderland's best player that season (although, at times, it seemed as though he was Sunderland's only player).

Clean sheets were rare – they tend to be when goalkeepers are stuck behind the worst defence in the league – with two in 20 games but his reputation still soared.

A £30million move to Everton was his reward for wowing Wearside with his flying stops. However, even with that move, a British record fee for a goalkeeper, few would have expected Pickford to arrive in Russia for the World Cup a little over a year later firmly established as England's first choice.

Few England players have enhanced their reputation quite as significantly as Pickford. Harry Kane is already regarded as one of world football's deadliest finishers. There is a strong case for Harry Maguire, whose own upward trajectory was unaffected by relegation from the Premier League in 2017, but it's difficult to look past Pickford's acrobatic heroics against Colombia and Sweden.

Like his initiation at Sunderland, Pickford's fledgling England career has been far from smooth sailing. He made his debut aged 23 last November – keeping a clean sheet in the 0-0 draw with Germany – and had just three caps to his name heading into the World Cup.

However, his appearances to that point offered sufficient evidence that Pickford could be the answer to England's long-standing goalkeeping woes.

Of course, Southgate had been looking for more than a shot-stopper. Goalkeeping in the modern age has evolved but Pickford has evolved with it, offering an impressive range of passing and astute positioning to supplement his reflexes and athleticism.

The England boss knew of Pickford before most, having handed him his Under-21 debut back in 2015, but the goalkeeper's stratospheric rise in the time that followed bolstered Southgate's confidence at a time when, with Joe Hart's dramatic loss of form, the situation between the posts looked decidedly bleak.

Pickford cemented his spot in the England starting line-up with sure-handed displays against the Netherlands and Nigeria but his World Cup campaign has hit a few road bumps. Having been denied clean sheets in the first two games, Pickford was beaten by former Sunderland teammate Adnan Januzaj as Belgium beat England 1-0 to top Group G.

Januzaj's shot was beautifully judged, curled into the top corner with power and precision, yet that did not shield Pickford from Gary Neville who, working as a pundit on ITV, offered an unflattering assessment of the goalkeeper's contribution. 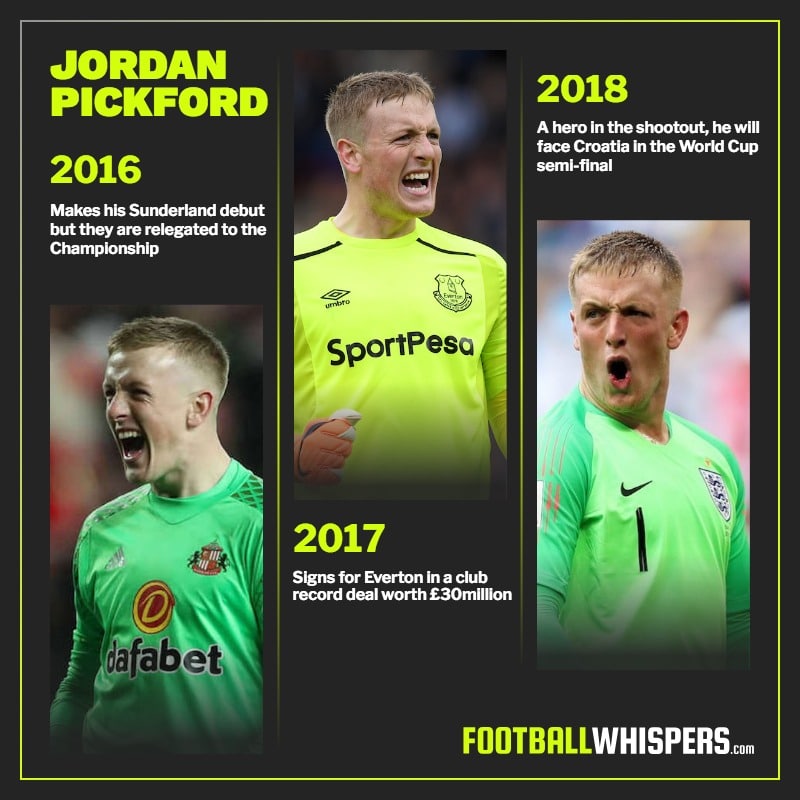 “His feet are up in the air. His feet are off the ground when he’s jumping. He goes with his wrong hand. It’s just a bit weird, the whole dive thing after.”

Add to that the strange comments from Belgium goalkeeper Thibaut Courtois, who appeared to mock Pickford's height (at 1.85m, he is below average height for a Premier League stopper) and there was a peculiar atmosphere surrounding the England shot stopper heading into the knockout rounds.

His response has been emphatic.

Pickford was the hero in the last-16 win over Colombia, producing a wonder save to tip Mateus Uribe's 30-yard strike beyond the post. That Yerry Mina scored from the resulting corner, the ball beating Vardy who was stationed on the post, would have rankled Pickford but his resilience shone through so he could have the final say.

The 24-year-old produced a brilliant penalty save to deny Carlos Bacca and pave the way for Eric Dier to fire England into the quarter-final, where Pickford would once again prove pivotal to his country's success.

Sweden were largely toothless as England controlled the game but there were times when Pickford was called into action, producing a diving save to deny Marcus Berg before tipping the striker's effort over the bar.

Viktor Claesson, too, was thwarted by Pickford's reactions. As England progressed to their first tournament semi-final in 28 years, Pickford basked in the acclaim, bagging the man-of-the-match award and being hailed by fans and pundits alike.

Goalkeeping errors have haunted England's tournament experiences for so long but Pickford's remarkable coming-of-age puts him on the precipice of footballing immortality. Two more inspired performances may well see him become the first shot stopper since Gordon Banks to hoist the World Cup trophy aloft.