It was the 2015/16 champions who were left reeling on deadline day, having to succumb to the Blues wishes and accept a £40million deal for England international Danny Drinkwater.

Since lifting the Premier League crown, the midlands club have made £72million for their title winning duo of Drinkwater and N'Golo Kanté, but will have to find a way to stop them in Saturday's clash.

Going into the weekend’s fixture, Craig Shakespeare now has to rely on the youthful exuberance of Wilfred Ndidi to lead the fight against Chelsea's midfield.

It is a big ask for the 20-year-old, but with Drinkwater gone, he will be forced to step up once again. At first the Nigerian was deemed as Kanté’s replacement, now he has to cover both.

Last season, it was the Chelsea new boy who saw more of the ball, making 63.7 passes per 90 minutes. This term, Ndidi is well done at just 36.3. That will increase now, with more asked of the young midfielder.

Drinkwater has yet to play a Premier League fixture this season, but when you look at his production in the last campaign, compared to what Ndidi has completed in the first three games, his are big shoes to fill.

The Englishman wins a higher percentage of his tackles, makes more interceptions and completes more of his attempted passes. However, the former Genk man does commit fewer fouls.

Both, however, fail to match the return of the PFA Player of the Year. Kanté is statistically one of the best midfielders in the Premier League. Both making and winning more tackles, also his interceptions numbers are better – but he does foul as much as his new team-mate. 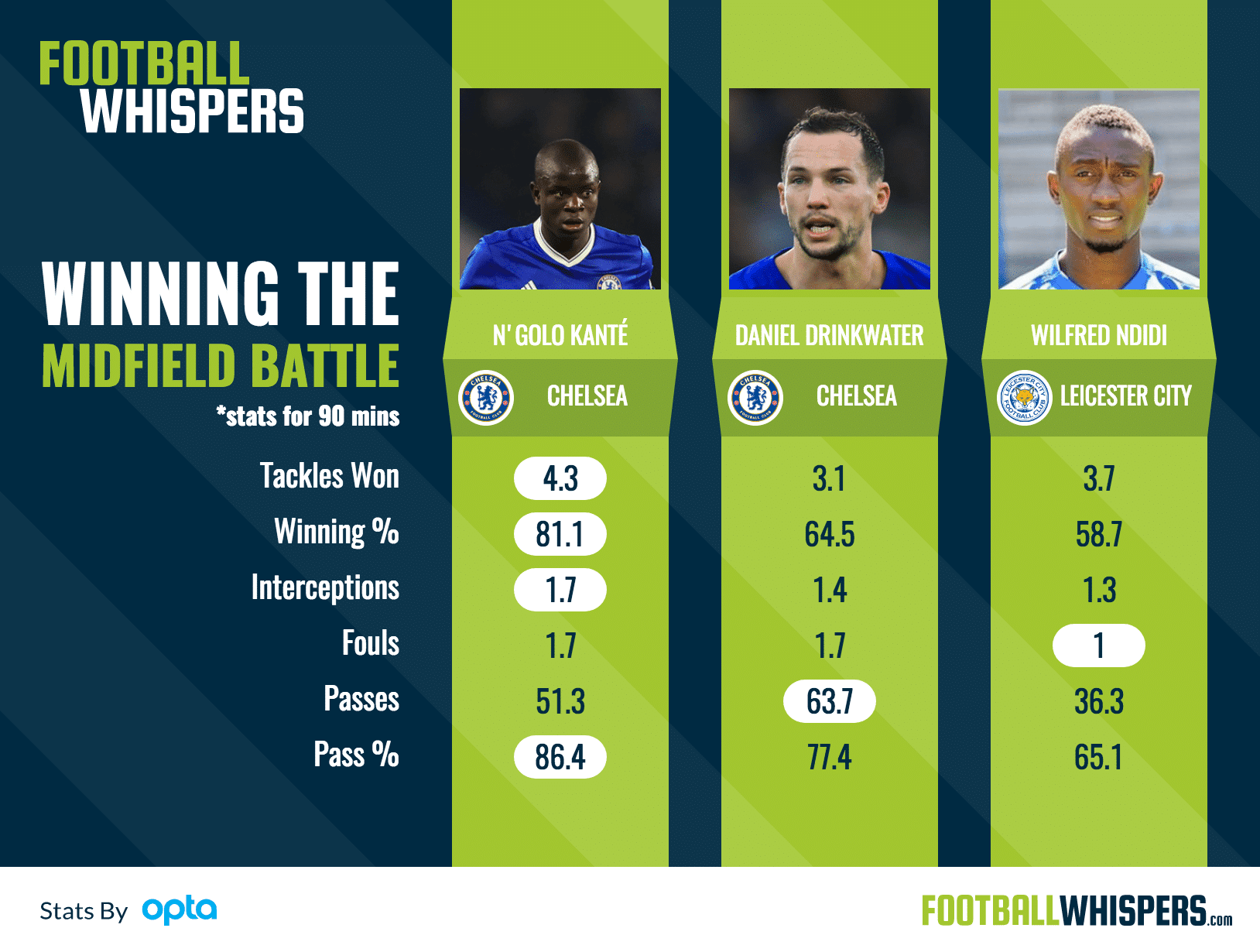 Throw Tiemoué Bakayoko into the mix and with Shakespeare having to cope with just Matty James after it was revealed that the Foxes didn’t register Adrien Silva in time – the paperwork was 14 seconds too late – winning the key midfield battle will be almost an impossible task for the home side.

Summer signing Vincent Iborra would be the ideal man to come in for Leicester, but after missing the start of the season through injury, there are doubts over whether he is fit enough to play from the start.

Use our predicted line-ups feature to pick and share the team’s you would pick on Saturday.

To make matters worse, Chelsea welcome Eden Hazard back to the squad for Saturday’s game, but the Belgian winger will likely start on the bench.

Gary Cahill will serve the last game of his ban, with Antonio Rüdiger lining up in his place.

26-year-old Austrian Aleksandar Dragovic is an option for Shakespeare at the heart of the defence, but is unlikely to start ahead of Wes Morgan or Harry Maguire.

Our unique algorithm has predicted the XI it believes is most likely to start, but you can also give it a go yourself. Just click ‘create your own’ and pick the players you would choose, and you can also see their stats per 90 minutes once you’ve picked them.

When you’re happy with your team, press confirm and you’ll be able to share it with your friends via social media.