For years Philippe Coutinho was a bit of an enigma. Not long after his arrival at Anfield the home crowd christened him as the magician. He was capable of executing pieces of skill that would astound, his vision was other worldly and the way he manipulated the ball was mesmerising. However, Houdini would have been a more apt nickname for the Brazilian at the time because after every jaw dropping trick he pulled off he had the tendency to disappear.

Coutinho was consistently inconsistent. There was a whole host of reasons why the conductor of the Liverpool attack found it difficult to sustain a 7/10 performance. When Liverpool signed him from Inter Milan in the January of 2012 Brendan Rodgers had the Reds playing either a 442 or a 4231 system. Coutinho started on the left hand side but was given the license to roam. Then, in the 2013/14 season, Rodgers shifted to a 442 diamond with the Liverpool no.10 as the left centre-midfielder. He excelled in that slightly more withdrawn role and embraced the space he was afforded to influence proceedings.

At the beginning of the 2014/15 season Liverpool switched to a 433 of sorts with Raheem Sterling and Philippe Coutinho tasked with supporting Daniel Sturridge after the departure of Luis Suarez. It didn’t last long though as Sturridge picked up an injury that meant Rodgers had to go back to the drawing board. After Mario Balotelli and Rickie Lambert failed to really gel with the team Liverpool started to play a variation of the 343 system, with Coutinho alongside Adam Lallana but just behind Raheem Sterling. There was also a match that season in which Coutinho was played as a false 9.

Christian Benteke was signed in the summer of 2015 and Liverpool started the season in a familiar 4231 system. The £32 million signing from Villa lead the line with Coutinho, Adam Lallana and Jordon Ibe as the supporting cast. By the end of September Liverpool were once again using a variation of a back three. Jurgen Klopp was appointed as Reds boss in October and immediately started using Coutinho on the left of his attacking three.

With so much change in a short space of time it’s understandable as to why Coutinho struggled for consistency. The one time he was played in a role over a sustained period was 2013/14 and that coincided with arguably his best form in a red shirt. He deserved the benefit of the doubt. Despite the front of some fans deep down there was nagging feeling that perhaps, because of how he’d been used during those key developmental years, the erratic Coutinho they’d become accustomed to would be the best they’d see of him.

For a player to realise their potential they need to be nurtured and developed properly. It’s key for a player to understand the fluidity of the modern game so being able to play a variety of roles if vital but it got to a stage where nobody actually knew where Coutinho should be starting. He didn’t have a home. It got to the stage where he was simply being shoehorned into ‘strongest starting XI’ teams because of his reputation and not because of what he brought to the team. The fact Brendan Rodgers kept dramatically changing the system every 6 months had an impact on Coutinho’s development.

There was also the thought Coutinho was playing alongside players who clashed with his style. The playmaker has the ability to unlock any defence but if he’s threading balls through to Rickie Lambert and Christian Benteke just how effective is he going to be? It’s a bit like giving a Lumberjack a spoon and asking him to chop down a big oak tree. It’s counter-productive. 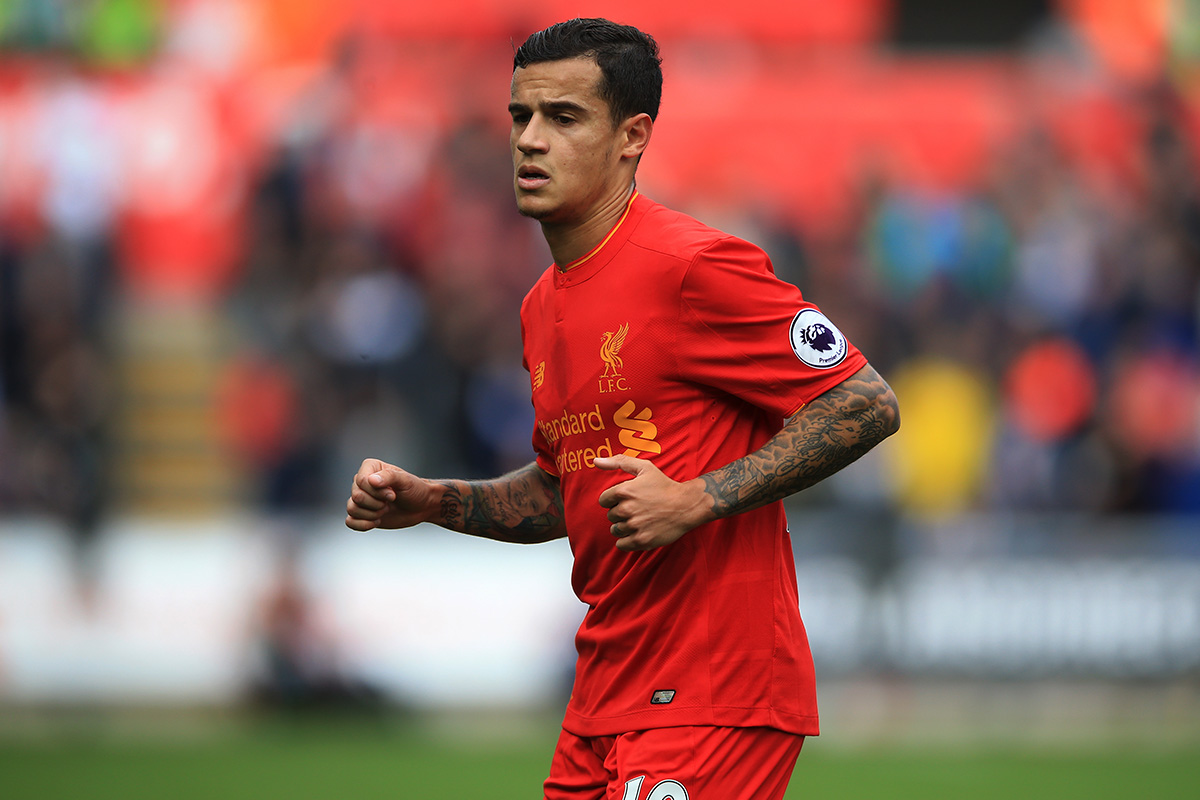 Things started to pick up when the German was appointed. It wasn’t a quick change overnight. It’s been a 12 month process and Liverpool are now getting their just rewards for having patience with the miniature maestro.

The Reds have started the season with a purpose. They currently sit top of the table after 11 league games, a point clear of Chelsea. They have scored 30 league goals already, almost 50% of what they scored in the entirety of 2015/16 and they are only in November. Coutinho currently has 5 goals and 5 assists in just 843 minutes of play. Meaning he’s directly involved in a goal every 84.3 minutes in the Premier League. He’s already matched his season total for 2014/15 and he’s just three goals behind his 2015/16 total with 27 games still to play. He’s on target to hit double figures in both goals and assists and it’s a far cry from the Coutinho of 2014/15 who appeared to be reliant on 35 yard wonder goals.

For years Liverpool had a problem breaking down teams that parked the bus. The opposition knew that if you put enough men behind the ball at Anfield it wouldn’t be too long before the Reds, especially Coutinho, would start having long distance shots as the frustration got the better of them. It was like clockwork.

In the two games Liverpool have failed to score in this season, against Burnley and Manchester United, Klopp has been frustrated about the team's lack of patience. It was as though some reverted back to default mode before Klopp.

“The game from the first second was very hectic. It was what they (United) wanted and what we didn’t want. That can happen. We lost patience much too early and then our passing was not too good anymore. We lost the patience. It was a really difficult game for a striker today, the way we played. We could have done better but in the end there was a good attitude and they worked really hard. They tried everything but with the wrong tools”

A magician’s assistant plays a part in all good illusions. Klopp recognised this and went about piecing together a system and a team that got the best out of his players, especially his attacking ones. Roberto Firmino’s clever movement and Sadio Mane’s electric pace is the perfect foil for Philippe Coutinho’s genius vision. They work as a unit and complement one another. The pressure is no longer on Coutinho to do the whole act by himself.

Klopp’s not only found a way to unlock Coutinho’s potential. He’s evolved him as a player.

What Klopp has done though by persisting with Coutinho in that attacking role is he’s managed to add a killer instinct to his game. He’s no longer looking to just assist or try his luck from 30 yards, he’s not getting into the area and that’s seen an increase in his goal threat.

The three images, taken from Liverpool’s win against Derby, show Coutinho’s new found attacking intent. It’s basic and something you are taught as a child – attack the space – but playmakers and creators don’t always have that instinct. It’s grossly underrated. 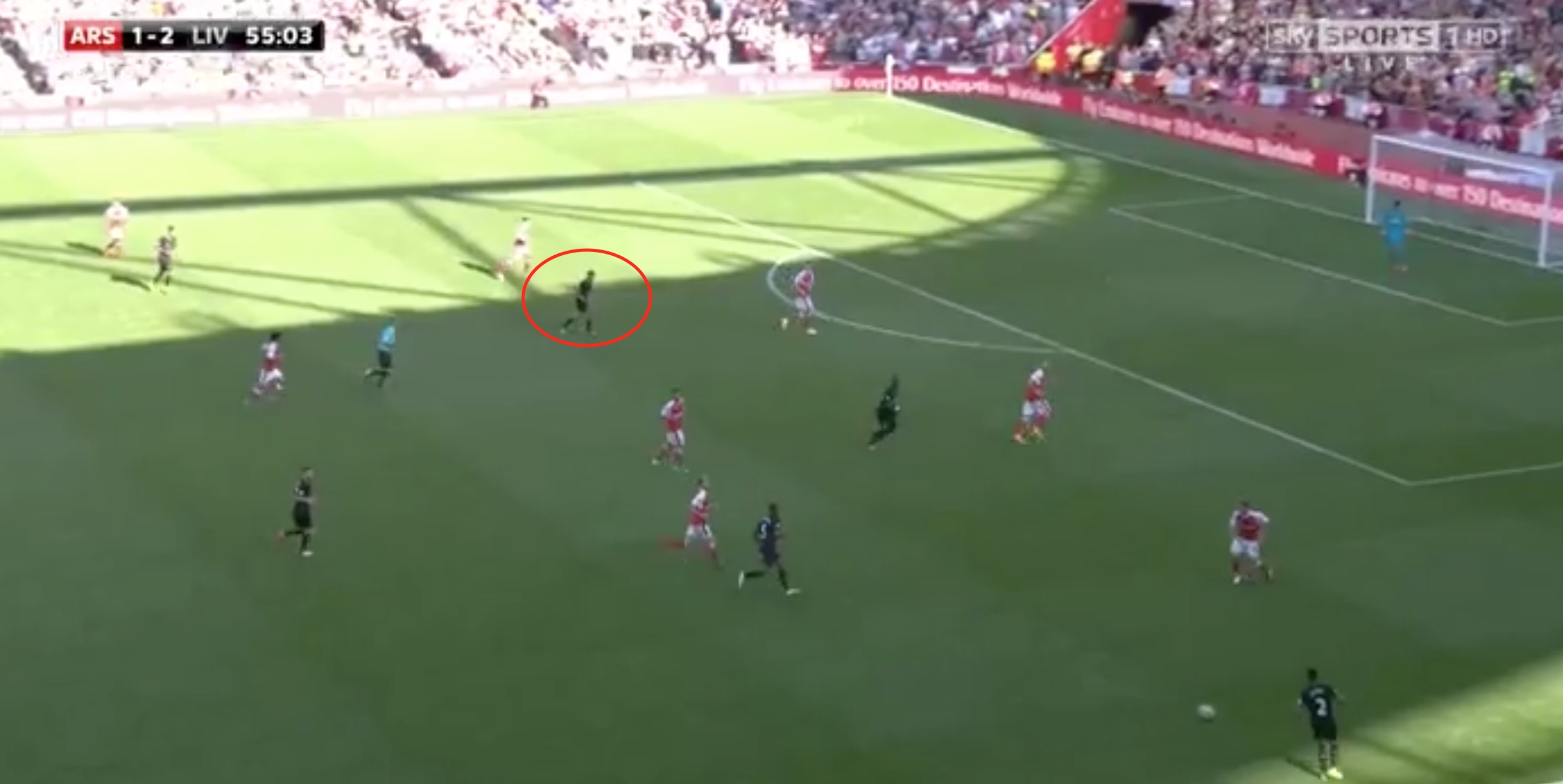 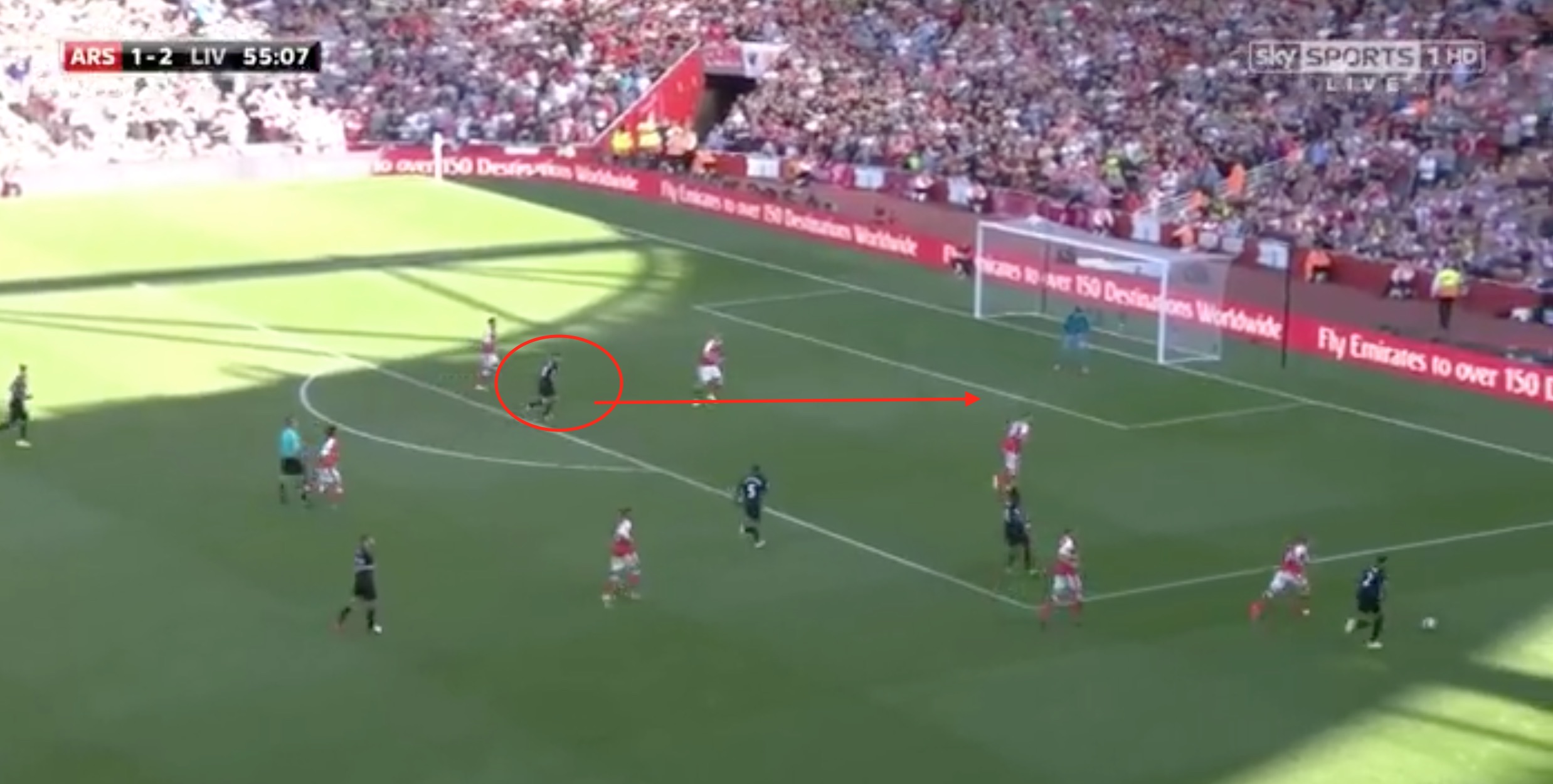 The four above images are in the build up to Liverpool’s third in their 4-3 win against Arsenal. Again it highlights Coutinho’s willingness to attack space and get into the penalty area and is not something you associate with other creative ‘number 10s’. He positions himself cleverly in the build up but not content with that as soon as the ball is worked wide he’s getting himself into a dangerous area. It’s just not something that would’ve been associated with the Coutinho of 18 months ago.

In the past six matches Coutinho has had 22 shots. Of those 22 shots 16 of them have come from within 25 yards of the goal and he’s scored two of them. It’s no exaggeration to say he could’ve scored 6 goals from those shots. It’s down to a mix of poor finishing and good goalkeeping that he’s not into double figures for the season. If he carries on in a similar vein all season he’s going to be getting regular chances to score. This is the season Coutinho sheds the consistently inconsistent tag and puts himself amongst Europe’s elite.