These two midtable sides are only separated by five points. Will that be a two or eight point gap come full time? Find out with our Pharco vs Al Ittihad match preview with free tips, predictions and odds mentioned along the way.

Pharco to win the match

To be fair, Al Ittihad Alexandria have three wins in their last six games; however, it's important to point out that those wins came at home. Al Ittihad have mostly struggled away from home this season, especially in recent months; they are without a win in their last seven road games, with two draws and five losses. In contrast, Pharco have been a difficult team to beat; they have no losses in their last 11 league games. Considering Al Ittihad's poor form away from home, we believe that Pharco will emerge victorious here.

A really low scoring match could be in store

Pharco have had one of the best defences in the Premier League this season; they've allowed just 15 goals so far, no team has conceded fewer goals. Conversely, Pharco have not scored a lot of goals; they found the net just 17 times in 22 league games this season. As they don't score or concede much, Pharco's games have been really low-scoring. As a matter of fact, three of Pharco's last four games ended goalless; their last six games have seen just three goals scored in total. Like Pharco, Al Ittihad have had their fair share of low-scoring games; as their last three games all went under 1.5. Considering seven of Pharco's last nine games went under 1.5, we shouldn't expect up to two goals in this match.

A midtable clash with pride on the line

The result of this game is unlikely to change the feel of either teams season too heavily with both seemingly destined for a finish in the middle of the league. What this game could go a long way to determining though is which side finishes highest with little between the duo right now.

Pharco are coming off four consecutive draws; they are on a 10 match unbeaten run, having not lost a game in over three months. It's worth mentioning that Pharco won just one of their last seven games; they'll hope to take all the points as Al Ittihad come visiting.

Al Ittihad have had some mixed results in recent weeks; they have three wins and three losses in their last six games. Emad El-Hahhas's men will take on an in-form Pharco side on Monday evening; it'll be interesting to see if they can end Pharco's 10 match unbeaten run.

A quickfire FAQ on Pharco vs Al Ittihad 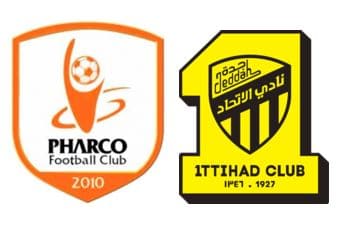