Hearts might be the favourites to top their Scottish League Cup group but teams won't just roll over for them. Can they get started with a win? Find out with our Peterhead vs Hearts match preview with free tips, predictions and odds mentioned along the way.

A win and clean sheet for Hearts

Hearts are unbeaten in their last five games; they've won three and drawn two. The most impressive thing about that streak though is that they didn't concede a single goal. Despite that form, Hearts proceeded to further boost their defence with a couple of signings, which means there is a huge difference in quality between them and Peterhead; Peterhead play their football in League One and their form isn't great either having lost their last two games. Hearts should be able to win this game comfortably; they will likely keep a clean sheet in the process.

As we mentioned in our first prediction, Hearts have kept five consecutive clean sheets. They also scored 13 goals in that time; over half of those goals have come in their last two games. Peterhead meanwhile lost their last two games shipping five goals. Given the form points to a Hearts win anyway, the fact the respective results have come at different levels really shows how straight forward this should be. If the attitude is right, Hearts will win comfortably.

Boyce to bang in a goal

With a -2 handicap prediction made, we clearly think Hearts will score a few; their striker Liam Boyce is the man to look out for. Boyce was not only the top scorer in the Scottish Championship last season but also the best player. He's shown time and time again that he can score goals and a game against a lower league side like Peterhead is an ideal playground for him; Boyce has scored three goals in his last four appearances for Hearts. He'll score here too.

Key stats for Peterhead vs Hearts

Anything but a Hearts win will be a huge shock

Newly promoted Premiership side Hearts are the favourites to win Group A and a match against Peterhead should be a straight forward opening to their campaign given their hosts have lost their last two and have inferior quality. Peterhead only avoided relegation last season due to some good relegation round results. The home side will have to look out for our anytime scorer tip Liam Boyce, who was the top scorer in the Scottish Championship last season. As for what could see Peterhead win the game? Hearts not being on theirs is probably the best they can hope for. 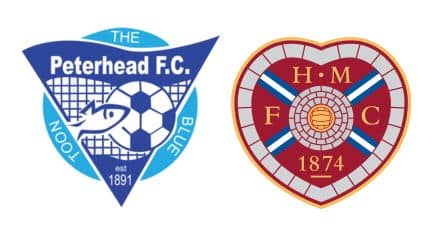